We are on the public bus between Grenada and the small mountain town of Ronda.  There are brown hills covered with golden grass and olive trees, rockier than my northern California and obviously a harsher environment.  But there are periodic orchards planted with straight rows of grapes and fruit trees, with scattered red tiled white stucco houses scattered among them.  We pass a small village with a mining cart as the monument in its central square and I realize that coal and other minerals were once the main economic support of this region.

The view as seen from the house of a famous rich merchant in town. 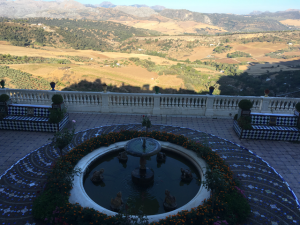 The bus is beautiful and new, with a “downstairs” bathroom, far superior to the Peter Pan Bus Line I have been traveling on through Connecticut and Massachusetts.  In fact, almost all of the public facilities in Spain have been far cleaner and more attractive than similar places in the U.S.:  bathrooms, train stations, bus stations, even the subway in Madrid. 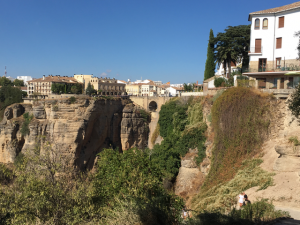 Ronda is incredibly charming and is now a main tourist draw — known for the bridge that spans the new and old parts of town over a deep gorge (in photo above).  It is also famous for its bull ring, one of the oldest and largest and the only one made all of stone in Spain.  I can imagine the crowds cheering in the covered stands as the rather brutal spectacle is enacted once again.

And, most interesting to me, Ronda is known for the importance of Andalusian Flamenco music in its role in Spanish musical history.  Some old guitars and lutes from the local museum proud of its musical heritage. 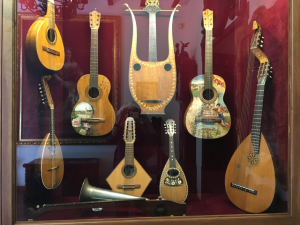 Our charming old house off the main municipal square, which is more a quiet park than a government gathering place, is a short walk from all the sights of this one-street town with old buildings, even in the “new” part of town, several squares and hosts of small restaurants catering to visitors.   It feels quiet and personal after our immersion in the more crowded and more urban environments in Spain. 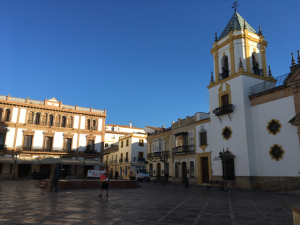 I have arranged to meet an old friend of mine, Jane, who moved from the U.S. to settle in Andalusia and we have wonderful tapas sitting in a cafe by an overlook with a local musician playing nearby.  After our snack, we go together to a guitar concert which her local ex-pat friends told her about and there we are enveloped in the sounds of both the classical and flamenco guitar by an expert player which appropriately sets the tone for our evening in this lovely town.

It is a place to come back to and rest for a few days.  Onto our last stop, Seville.