Granada is a bustling city with its main street lined with banks and stores and a sense of commerce on the move.   Here, as in Madrid, it is hard to remember the recession that has hit Spain so hard in the last decade .  The beautiful buildings have ornate classical and art deco decorations on the upper floors and exude a sense of prosperity.   But nearby is the Albaicin, the old moorish area of the city, a warren of twisting streets leading up onto the hillside, now interspersed with churches and convents which clearly mark the transition from the Islamic to the Christian world. 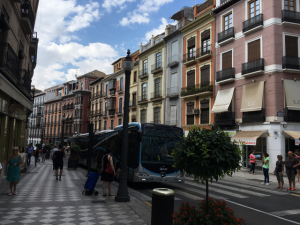 Near our hotel is the Cathedral and Royal Chapel, where Isabelle and Ferdinand, the harsh perpetrators of a strict Catholics-only society, lie buried.  Spain somehow woke up from the repressions of its past, perhaps pushed by the civil war into a more progressive way of thinking, and thus became the first major country in the world to legalize same-sex marriage, despite its Catholic basis. 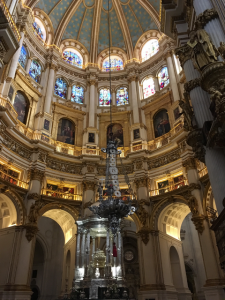 In the evenings the nearby squares are thronged with people at the local bars and cafes drinking and talking way into the night.  One of our group members is a serious Salsa dancer and reported that at both clubs and private parties, people dance and party until 3-4 in the morning — and this is during the week when most of them have to get up and go to work the same day.  Although some of our group were surprised by the amount of cigarette smoking outside — to me, having experienced the intense widespread smoking habits of Europe at a slightly earlier time, it seems that smoking has decreased significantly in public areas.

Almost our entire group below. 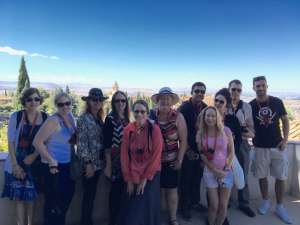 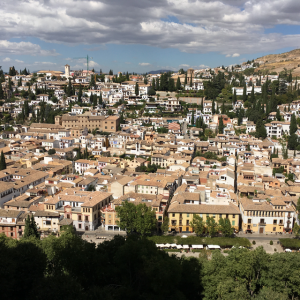 The glory of Granada is the world-famous Alhambra, sitting on top of a high cliff on the other side of the small river that bounds the Albaicin.  A fortress, a palace, a one-time place of unearthly beauty and delights and displaying some of the highest expressions of Islamic architecture and craftsmanship.

From the Albaicin looking toward the Alhambra near sunset 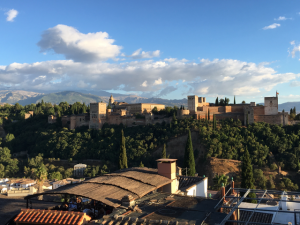 There are the gardens, changing with the seasons, now maintained by 200 gardeners, with fruit trees, including pomegranate, the symbol of Granada, and many reflecting pools of water.  We were told the Alhambra had fallen into great ruin by the time Washington Irving from New York lived there in about 1815 and wrote “Tales of the Alhambra” which awakened a sense of romanticism in the upper classes who then embarked on grand tours of those picturesque sites in Europe which evoked a sense of the mystery and magic of nature and fading beauty. 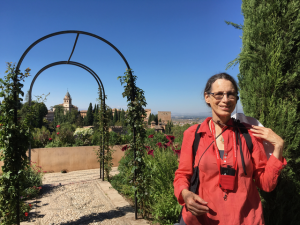 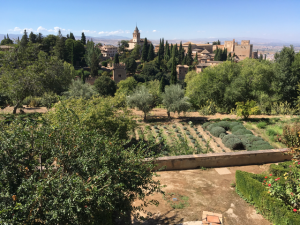 I love looking at photographs taken of these sites during the first flourishing of the photographic art, as well as the many lithographs of the 19th century, when copies were brought home to England and America and first encouraged world travels.  From the spartan culture of New York to exotic Spain would have been a significant transition. 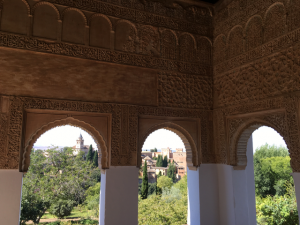 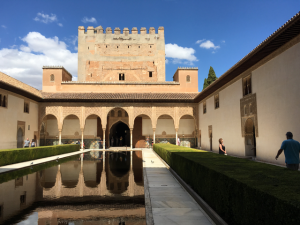 The beauty of the interior design of the Alhambra is extraordinary.  Fine lacework carved into stone in the shape of arches and curved flowering designs.  Originally colored in bright shades of red and blue and yellow and now faded to a very faint hue, even today doorways look like a 3-dimensional Persian carpet.  Arabic script is part of much of the design which we are told says “There is no God but Allah” which was left unscathed by the Christina conquerors although a large church was built in the middle the Alhambra structure. 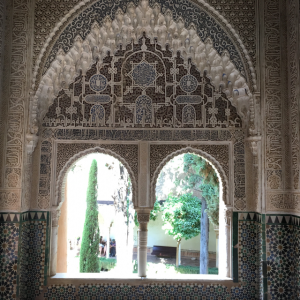 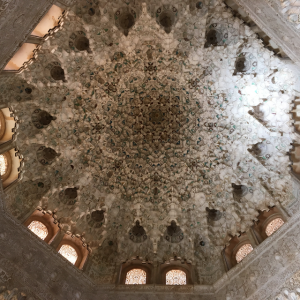 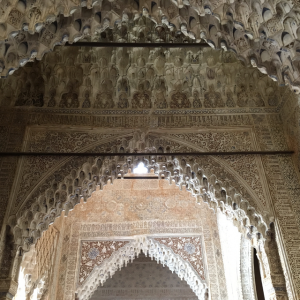 Perhaps they had some sense of reverence for  beauty which overcame their religious dogma or perhaps they decided if they could not read it, it was fine to leave, or perhaps the meaning was skewed into acceptance that it fit into a Christian concept of one God.   In any case, posterity has been indeed fortunate that here, as in other parts of Moorish Spain, the Arabic religious inscriptions have been left to allow us to applaud the great craftsmanship of many generations of craftsmen. 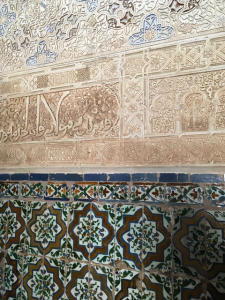 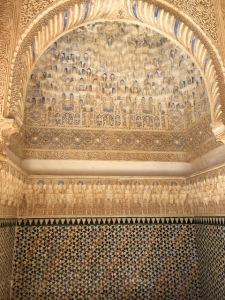 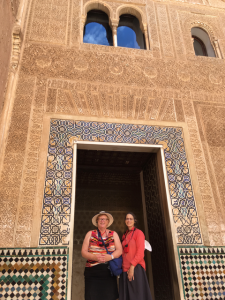 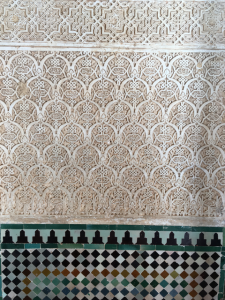 Our group takes a flamenco class together and we try first hand the intricate rhythms and footwork of a beautiful art.  Photos of our attempts would be too embarrassing.  But flamenco and guitar music is everywhere — in squares where musicians set up temporary shop to try to gather coins from the many tourists, to a man playing guitar on the small patio overlooking a street, to the several flamenco clubs offering wine, music and dance to the tourists who flock to this area from all over the world.  Teresa had her backpack picked while watching street performers – only a small amount of cash and a scarf were taken — but a warning to us all of the dangers of crowds in tourist areas. 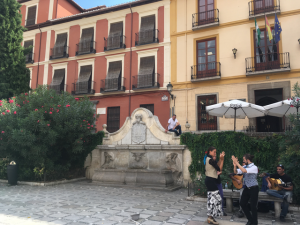 I find a first-class vegan restaurant near the main part of town, very welcome, as well as a very good Moroccan restaurant deep in the Albaicin where Teresa, Joseph and I have lunch.  At night, I am with Canadian friends Karen and Duncan from our group on an outside terrace overlooking the lit-up Alhambra at night, a magnificent sight. 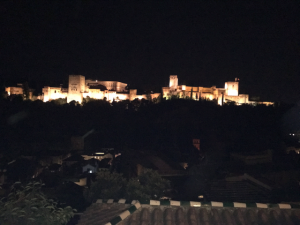 And the highlight for me was an evening spent with Theresa in the Hammam al Andalusia, a recreation of the Moorish baths, with beautiful tiled rooms with arches and hot and cold pools with mosaic domes lit only by candles.  This experience included being led in silence to alcoves where high -level masseurs and masseuses relaxed sore muscles to the sound of running water while cold sweet mint tea awaits on filigreed platters.

I could stay longer in Granada – good food, food music and great beauty.