The largest and most beautiful city in Europe in the 1200’s still shines but slightly tarnished by its political history.   The culture that made it rich, the Arabic and Jewish societies, were required to leave, convert or be killed, starting with riots in 1392 which saw a mass exodus and then the Alhambra Decree in 1492 which virtually ended any but Catholic inhabitants in the region. 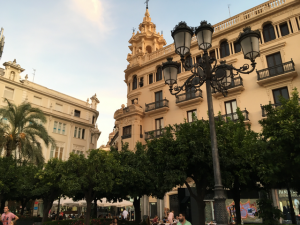 Although Cordoba remains a real working town in its inner circle, it is still filled with tourist shops and restaurants that dominate the landscape.  It is interesting to me that in both Toledo and here in Cordoba, the only two cities where relics of Spanish synagogues still remain after the brutal suppression, the history of the once flourishing Jewish community is touted and commercialized – with many shops set up to sell Jewish-themed trinkets to tourists.  Muslim heritage, with its strong architectural statement left by the Mudejar style of buildings, is far more visible although finding a halal restaurant that doesn’t serve ham would be difficult indeed.   A narrow street in the old Jewish quarter and a statue of Maimonides, a famous Jewish intellectual from Cordoba. 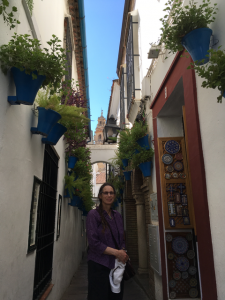 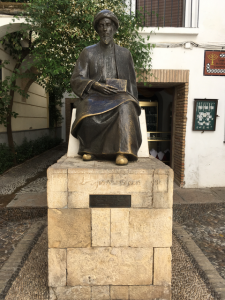 The Cathedral and former Grand Mosque in Cordoba is exquisite and confusing at the same time:  The ancient red and white arches and columns with a variety of capitol styles on top were reused from existing structures from the 1100s to the 1300s  Great numbers of columns of different marbles and stone seem to organically grow from floor to the overhead arches. 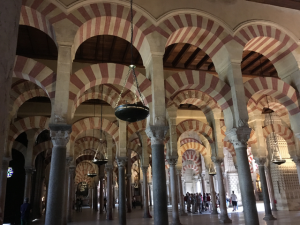 The ceiling opens in the center into a large dome and there is a magnificent side sanctuary with mosaic tile designs forming an enclave which once held the Koran. 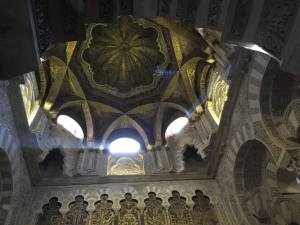 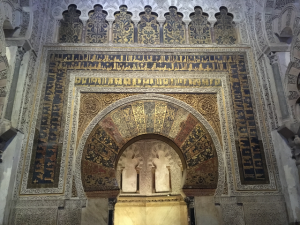 With the conquest of the Christians in the 1300s, this impressive mosque was “purified” and converted to a church with implausible consequences:  a large baroque sanctuary which took over 200 years to build, elaborately carved and painted and plastered in an ornate style which contrasts sharply with the stark beauty and purity of the original Arabic design.  It is much easier to imagine in this space large groups of people facing Mecca and bending in prayer among the columns then medieval Christians sitting in pews and listening to sermons and church music.

Theresa, my new friend from Canada, and I have a world-class tapas lunch with samorejo (a form of gazpacho), fried eggplant with molasses, a local specialty, spinach and chickpeas, garlic mushrooms and garlic sauce on fresh lettuce  well as a potato salad dish and, for Theresa, fried anchovies.   Our half-eaten lunch before I remembered to take a photo. 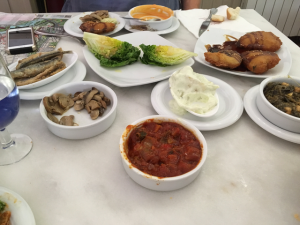 It turns out to be World Tourist Day, how lucky for us as most city sites are free today and open late, and after visiting the small synagogue and the well-curated Sephardic museum, we find ourselves at the excavated remains of the ancient Arabic baths created by the Caliphate rulers as part of their palace complex.   Utilizing Roman concepts of hot water and now below ground level, we find many rooms which are remains of the baths which were an important part of daily life for the wealthy muslims of those centuries. 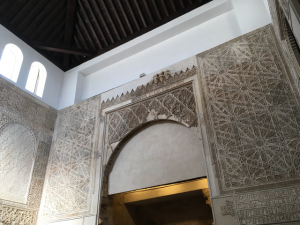 And nearby in the late afternoon of a very hot day (Teresa saw a thermometer which read 35 degrees Centigrade which is about 93 degrees), we find ourselves in the Alcazar Gardens, and the importance of the art of the landscape designers becomes clear.  The garden is lined with pools and running water which cools the air on this hot day and creates a sense of tranquility.

This must have contrasted sharply with the active dusty marketplaces of the times.  I can imagine the covered stalls in the numerous small squares selling local produce as well as imports from Africa and the Far East to the traders and inhabitants of this largest and most commercial center of Europe, with the dust rising and tempers fraying in the heat — while nearby lies a green space open to the privileged few, with lanes of flowers and trees and the sound of flowing water and misting pools, producing a sense of an oasis in a desert.

We wash our faces from one of the pools and walk down the rows of clipped cypresses and hedges with hidden seating for rest and, perhaps, trysts.  This Palace is right near the river and there are several bridges crossing over.  We walk back through the old stone streets, very quiet in the late afternoon, past an old Roman Temple, its remaining roofless columns standing straight and commanding into the sky and speaking of a much earlier epoch of this town.

Tomorrow we leave for Grenada.