Like many old city towns which needed defense, the old heart of Toledo stands on a hill with a river on two sides and fortified walls on the others.  It is hard for transient visitors like ourselves to keep straight the many epochs of history on this Spanish soil — the Romans, the Visigoths, the Jews, the Arabic immigration and conquest, the Christian takeover and supremacy, leading to the expulsion of all non-Catholics, the Inquisition and onwards eventually into the Civil War of the last century.   Where does that leave us now?   Standing on a street where there was once great markets and a mingling of cultures, three religions living for a few hundred years in peace and prosperity.  We call that “medieval times”, 1100-1300 AD, but in some ways more enlightened than today where differences in culture are so little tolerated.

The old stonework in the streets and buildings is beautiful.  The roads are very narrow and winding, only locals allowed to drive automobiles these days, with automatic stanchions in the middle of the cobbled street electronically triggered to submerge upon approach of an authorized vehicle,   The wealthy in past times connected two buildings across the street from each other through a second story arched passageway in an attempt to privatize the common throughway area.   These remain as historic reminders of how quickly urban settings can change,  now charming and quaint but once the source of discord among neighbors. 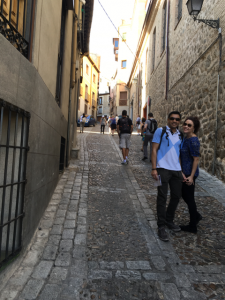 The wealth and talent of the country was clearly channeled  by those in power into the coffers of the Catholic hierarchy, and displayed in the glory of its churches.   This is most unabashedly seen in the magnificent Toledo cathedral, (one of the richest in Europe), with additions sanctioned and paid for by successive head bishops eager to see their names displayed for the glory of God and their own egos.   This building is quite remarkable in its architectural changes over time, including an ornate baroque alter within an exemplary gothic shell. 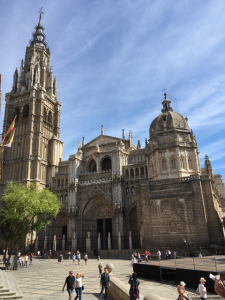 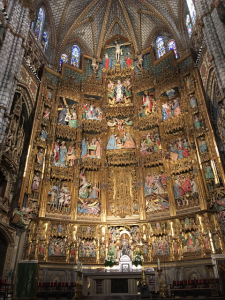 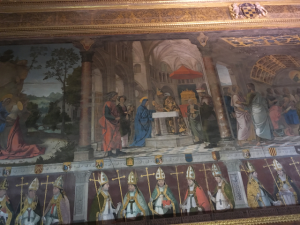 There is a large so-called Jewish Quarter, abandoned since the expulsion of the Jews in 1492, but now symbolically existing along with 2 restored synagogues, now only monuments and museums, as there are not even 10 men to form a minyan here any longer.   But there are imbedded tiles in the stonework streets  indicating the former existence of the once flourishing Jewish quarter. 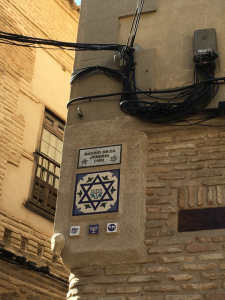 My first tapas lunch was a good experience — enough vegan food to keep me healthy and happy, grilled vegetables and bread, sitting outside on a patio on a warm day, with my new friends from our group of 12 , hailing from Canada, the U.S., Scotland, England, and Malaysia.

We return in the evening from Toledo to Madrid where I had spent two days before our group met and which I spent mainly visiting the outstanding museums of this country whose artists gave birth to so much of 20th century art.  Tonight, I walk with a few new friends on well maintained streets from the Palacio Real and its gardens to the Plaza Mayor and then onto the ironwork decorated Mercado, once the main food market in this part of town.  It is now filled with high-end food stalls where one can sit and eat with meats and seafoods and sweets displayed for sale in glass cases and where it is hard, especially if don’t speak Spanish, to get the attention of the salespeople behind the counters.  This beautiful old building is now mainly frequented by tourists, both from within and without Spain, and we enjoyed rubbing elbows with a diverse group of people from around the world as we ate our gazpacho and tapas with relish.  Below, the Palacio Real and the Mercado. 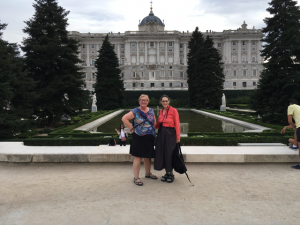 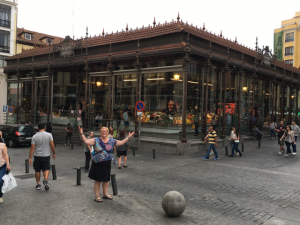 We walk back in a perfect warm breeze through the Opera plaza, with lights shining on some of the beautiful 19th century architecture around us and where the local population is just beginning their evening at 9 pm. 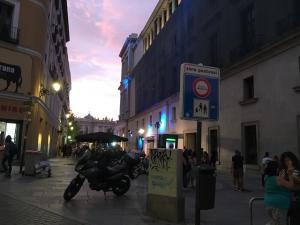