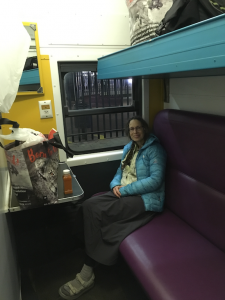 It is easy to create stories out of this landscape our train is passing through from Johannesburg to Cape Town.   I have not done my homework and have not read about the history of this country but an afternoon at the well-curated Apartheid Museum, immersed in the photographs and descriptions of the early days of colonialism, has given me sufficient images to invent scenarios. Our trains route is fairly direct, slicing through what was once the Africaan-speaking countryside to the Cape of Good Hope, crossing long stretches of scrubby plains broken by stands of windblown trees under which it is not hard to visualize lions and herds of impala. 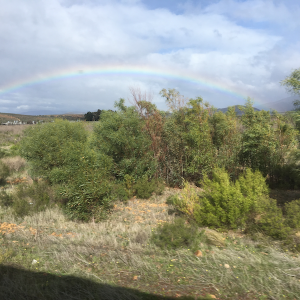 We have 34 stops along this route, mostly very small towns in an agricultural area.  We have taken the older, common, train and not the one designed for tourists.  An older gentleman I met on the train who was born and lived his whole life in the Cape area tells me the landscape will change and we will be entering the Karoo desert at night where it will be very cold.  Notice how clean this station is. 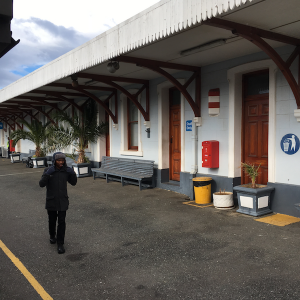 We stop at stations with names like Potchefstroom and Klerksdorp, reflecting the Dutch-derived white settlers who took land for farming and for mining the rich natural resources of this terrain.   I am half-asleep as the sun begins to set and we stop at a station with the distinctive dutch frontal design of flat top and curved wings.  The station is white but cracking and peeling a bit around the edges, clean but erected in more supportive times and nearby, as the train pulls away from the station, are stretches of neat suburban houses, one story ranch style buildings, with yards neatly fenced, some with children’s play structures, each shaded by leafy trees and street lamps.  I can imagine the women of dutch decent meeting in kafe klatches, to discuss the problems with their servants, the education of their children, their increasing uneasiness with the push for racial equality.   And then further outside the town are a community of identical painted buildings resembling small barracks, clustered together, and these, I imagine, are where the servants live, situated together not as much for protection but for separation from the ruling class.   A little ways on is a large once-prosperous refinery of some sort, i can not tell whether it is still functional or not, perhaps a granary or agricultural processing plant of some sort of other, with the tallest tower inscribed in fading white paint with the name “Snowflake”.  Something no one raised here would ever have seen but which remains in the cultural memory of a people. 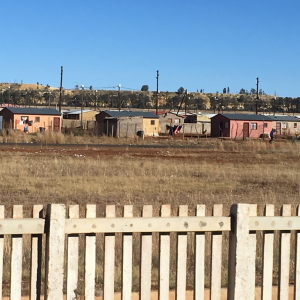 Typical Concrete Homes Along the Tracks

The setting sun removes the last of its warmth as well as light.  It is cold, and going to get a lot colder tonight on this train which is now 2.5 hours behind schedule.  My Capetown-born friend remarks that we are traveling in a tin box through a desert.  The train manager told us that there was a problem with the “points” and a technician was needed before we could proceed.

Our 4-berth private compartment, upgraded by the charity of the train manager from a 2-person coupe, is comfortable for Carol and myself, with a small private sink in our room and with 2 toilets and even a shower room down the corridor.  But it is cold and I bribed the train porter making our beds for an extra blanket.

We have stocked up with food for this journey which will do well for us, especially me, as there is nothing I can eat in the dining car with macaroni and cheese the only nod to possible vegetarian guests and vegans appear to be mythical beings.  The heaters in our compartment have long since become useless and the desert outside is cooling our metal box down quickly..

We have 28 more stops until the morning and it is now dark outside.  Lights are scattered around the landscape on one side of the train and on the other side are street lamps and gas stations (or petrol stations as they would say here) as a major road now parallels the tracks and businesses stretch out along the railroad line.  Large tall orange fluorescents flood an area that my storyline tells me are security for the wealthier inhabitants of this town.

What I see out the window is in accord with what we learned yesterday in one of the museums: that South Africa consumes 40% of the electricity generated in Africa.  My driver from the Airport told me how he was raised a long time ago in a small village in the Northeast of the country and when I asked what changes have occurred since that time he said electricity, running water, and roads.  And that, I expect, are the high points of what this industrialized economy has brought to his people.  The low points being, as both Raymond and Nelson, our drivers, have told us, the ever increasing drug use.  This morning the radio in the car informed us that use of drugs by pregnant women has increased 30% over the past five years, as reported by the main Johannesburg maternity hospital.  The negative side of an unequal prosperity. 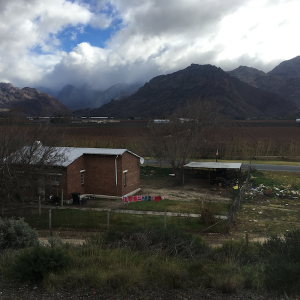 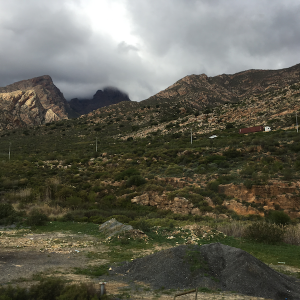 We woke this morning in the cold after a rocky sleep punctuated by many stops and shouting inside our corridor as well as very squeaky brakes and rumbling tracks.  I wore my down jacket and my thermoball jacket to bed, 2 pairs of socks and 2 pairs of pants.   Outside is a desert with rolling hills and some scrubby bushes.  This gradually turns into arid grazing land with the remains of a few small 1-2 person British concrete protective forts erected during the Boer war to protect troops against guerrilla fighting Boer farmers who settled here and ran cattle and sheep.  We heard from a local on the train that General Kirschner’s reply to these attacks was to round up all the women and children at home who were provisioning the fighters and put them in a concentration camp where most of them died from disease. 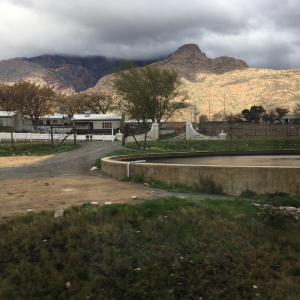 We have met a few interesting people on the train, Brian, an old-timer from Cape Town, a soccer coach from Namibia coming to check out the housing for his teams coming for competition in August, a father from London who was raised in Cape Town and his precocious 9-year old young daughter who spends the summer holidays in Cape Town and goes to the local school on the beach as well as her private school in London.   She told me in Cape Town, the students are taught in English but learn Afrikaans as well as the local tribal language in the later grades.  But in England it is only English and Math and British history. 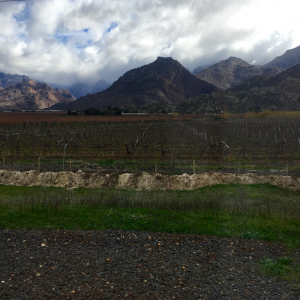 The train goes through a very long tunnel and comes out in a different landscape; a few more shorter tunnels later and we find ourselves rolling through rich green countryside, with winter grape vines diagonally spread across the countryside with grey-green hills rising sharply in the distance.

We are entering the outskirts of the famous wine country of South Africa, we now parallel the main road, and there are farms and a higher level of prosperity. 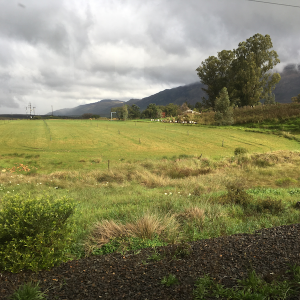 In Greener Pastures with Bee Hives

And then, just past the station of Huguenot, we stop.  No motion.  For hours.  We finally hear that a train 3 ahead of us has jumped the tracks and various tests and measurement are being done before the situation can be corrected and let us move forward.  And so we get to know our neighbors a little better, offer to share food, someone opens a bottle of wine, and then finally, a lurch and we are off.  We arrive in Cape Town 6 hours late and with the help of our slightly-drunk compartment friends get a taxi to our beautiful apartment.

I think Carol believes I am crazy to want to take such a train trip, knowing through my Indian rail experiences what may lie ahead — but I enjoyed it and would do it again.  Although a 1 hour flight from Johannesburg to Cape Town at the moment sounds very tempting.