The most beautiful cities in the world seem to share some common characteristics:  mountains sloping down toward natural water, ocean or harbor:  Rio de Janeiro, San Francisco, Vancouver, Hong Kong, Queenstown, to name a few.   But Cape Town is in a truly remarkable setting:  with Table Mountain and related peaks holding up its back, as it slopes gently down to the water forming a handsome bowl. 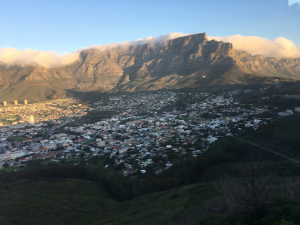 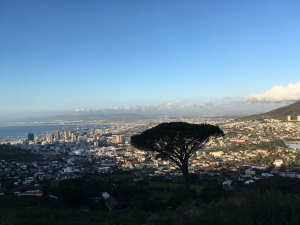 And although it has had its share of oppressive regimes as a major slave port for the Dutch and then the British, and more recently the site of the major prison, Robben Island, for anti-apartheid activists, it retained a greater character of tolerance than other places on the African continent.  It was able to weather the storms of South African independence and the result is a modern world-class city filled with beautiful parks, impressive wineries and a predominant European culture — on the surface. 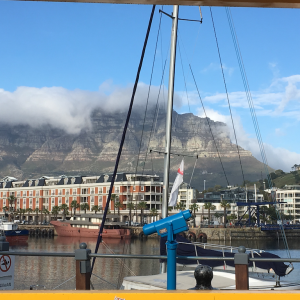 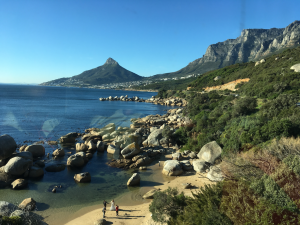 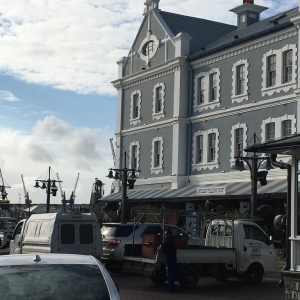 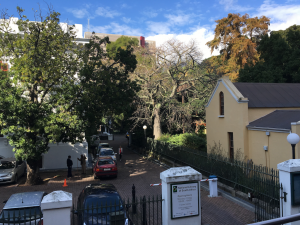 Near the South Africa Museum & Library

It is a matter of color.  The white world predominates in the city, with large modern apartment complexes and shopping centers overlooking the water and green belts    The area of the city that once held a lively group  of mixed ethnicities, including old Jewish businesses, was bulldozed in the 1960’s to make room for white-only development. Following strong protests, new development in this area, District 6, was stopped, resulting in wide open swaths of land still waiting for decisions about its future. 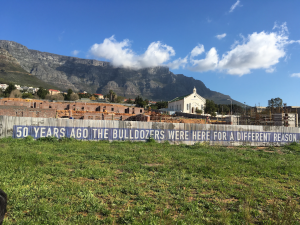 District 6 Statement on wall of new development:  50 years ago the bulldozers were here for a different reason 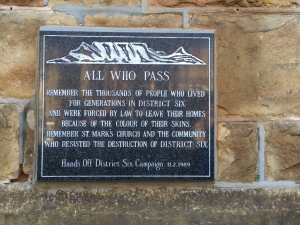 The Bo-Kaap area, home to the descendants of mostly Malay, and thus Muslim, freed slaves, is the only other area that retains much ethnic diversity.  It has distinguished itself with brightly painted homes. 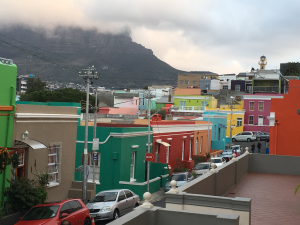 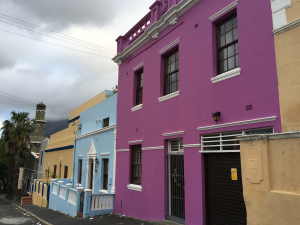 As a wealthy European, I could live in Cape Town with every modern luxury and convenience I might have at home.  The AirBnB apartments we stayed in were luxurious and fully outfitted with large decks overlooking the mountains.  But security is the issue.  We were told never to walk around by ourselves after dark, to only take cabs, that robbery was rife and it was necessary to keep watch around oneself at all time.  That is a large trade-off in one’s life.

Service workers all live outside the city, as well as  those who might not feel comfortable in and can’t afford the posh districts, occupying more modest tracts of lands in the suburbs although with good schools and shopping districts.  This includes those who were once categorized in the Apartheid system as “coloured” — some mixture of local black Africans and European, Indian, Malay.  I can’t distinguish one group from another but it seems the locals can.  And, like in the United States, it then becomes an issue of economic opportunities, who gets educated and who gets the jobs.  On the edge of the city are the projects for those in greater poverty, mostly black South Africans.

And then, much further out, too distant for useful commute for work, are the settlements.  Carol and I had a private tour of one such community, holding 30,000 people, about 5000 families and a high percentage of children, living in corrugated metal shanties, with shared water and toilet facilities.  Following a fire that destroyed many homes, the metal roofs are now painted with white fire retardant.  Many of the South Africans get to live in small concrete block houses and the remainder are mostly immigrants from other African countries, fleeing war and starvation.   The occupants have developed their own world and cultures within these flimsy buildings, with hair salons, recycled closing stands, and of course taverns.  The church has set up a community center, a bright light in this rather dismal world.   Our tour guide was an older gentleman who has worked for the community for decades and I told him I would try to arrange for a delivery of books to him for the local library, which is in the process of being moved to a newer building. 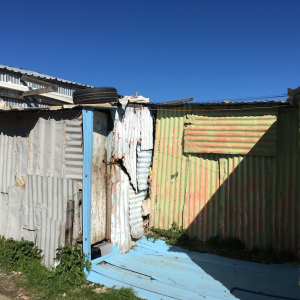 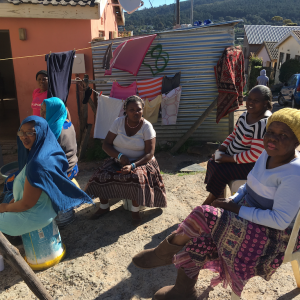 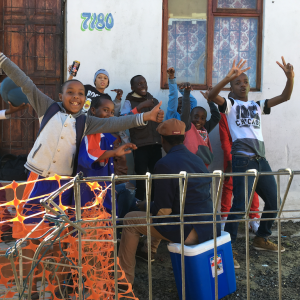 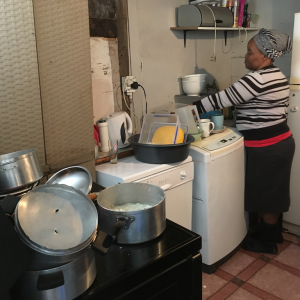 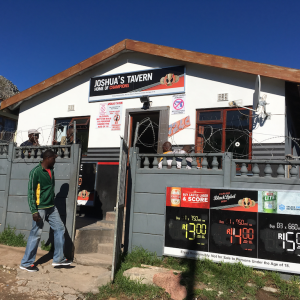 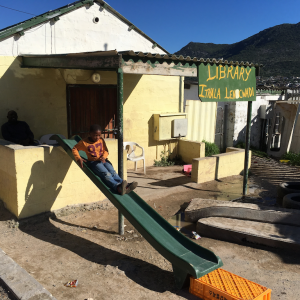 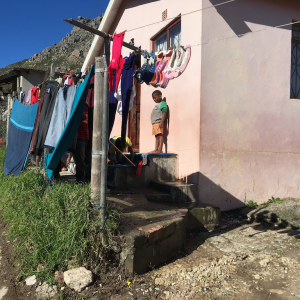 Carol and I did the drive down to the Cape of Good Hope, stopping in beautiful Simonstown on the coast, where I saw in a real estate window that a large beautiful home overlooking the water cost about $400,000.  We sat at a winery overlooking well maintained vineyards, walked along various waterfronts, and rode to the top of Signal Mountain for spectacular views. 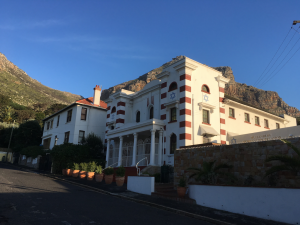 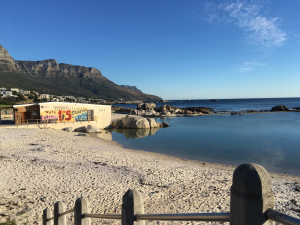 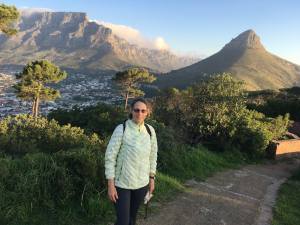 On top of Signal Mountain

As any trip to Africa is about animals, we start here with African penguins at Boulders National Park and then a wild ostrich at the Cape of Good Hope.  The end of the continent. 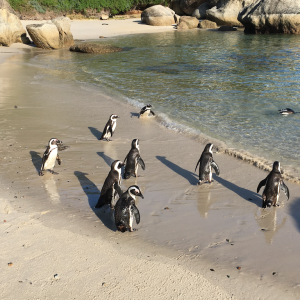 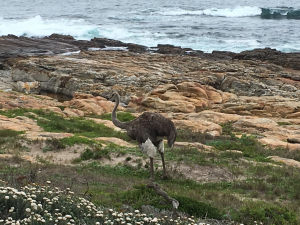 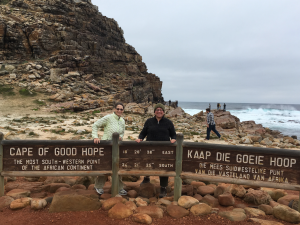 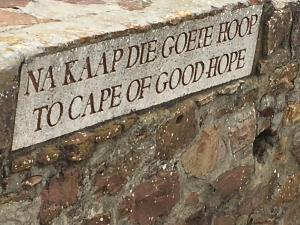 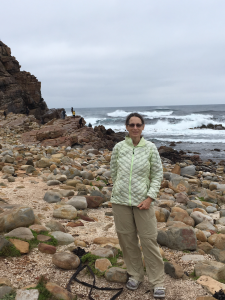 The Jewish Museum gave us an interesting view of immigrant history and we ate delicious Ethiopian and Indian food in some of the wonderful restaurants of the city.  The Robben Island museum had a special exhibit on Anne Frank which gave a different perspective of the oppression of a group of people.  The Kirstenbosch gardens were unbelievably beautiful, with flowers and birds native only to this area, and, probably my favorite activity, we took 2 walking tours, one of District Six and one of the Bo-Kaap area which gave us a greater sense of the divisive and cohesive history of the area. 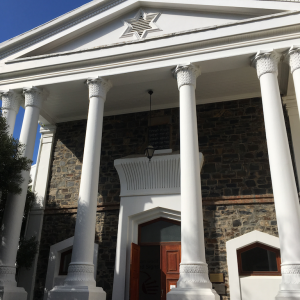 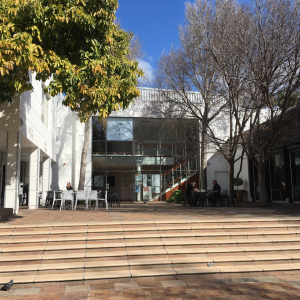 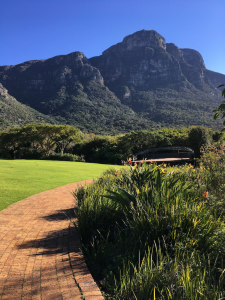 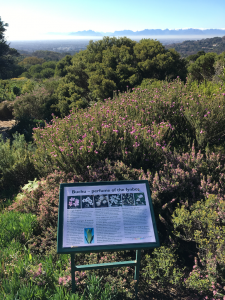 I was surprised that the language of Africaans is still a significant language, with signs and local newspapers in this strange hybrid language described as 17th century Dutch with local idioms.  A Dutch couple I met on our walking tour told me that by listening very carefully they could understand what was being said and the Africaans speakers could understand them also with great difficulty.  And even though I heard through one source it was developed as the language taught to children born into slavery, it is still basically a language of descendants of the white colonists who settled in the country.

Cape Town was not as I expected.  It is very up-to-date modern but with a significant history that refracts the light and changes the perspective of one’s experience.