We are traveling by van through a semi-arid bush landscape from Zambia to Botswana, with mainly barren trees, some with green and gold leaves ready to fall on the already dry earth.  Punctuated along the way are very small groups of straw huts, small canopied structures, a few mud brick half-walls with thatched canopy, perhaps schools, a few concrete buildings and large electrical transmitters with wires strung across the rolling yellow hills.  This is the beginning of the dry season but it already looks very parched to me.  Now I definitely feel we are in Africa. 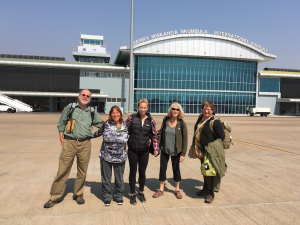 At the Livingstone Airport

Our first three days in Zambia were acclimating to a different sense of time and different spectrum of ways of life.  Livingstone, the Zambian side of the Zambezi river and Victoria Falls, is a small town.  Walking the main street, we pass some stretches of open land with scattered solo businesses (car repair, hardware store, used clothing), then a string of one-story buildings with small restaurants and stores (a small market with a sign “There is no app to replace the lap”), one large 8 story building (I asked whether it was an office building or apartment building as it was hard to tell — although there were some sign boards for a driving school) and a more modern strip mall with a ShopRite supermarket which we visited to see what is locally available (in case I needed non-organic sweetened soy milk and local peanut butter mixed with salt and oil).  And of course a few churches, including the David Livingstone Presbyterian Memorial Church.  A number of banks with ATMs (where we stop and get the local kwacha).  Only one traffic light in town. Some street scenes below. 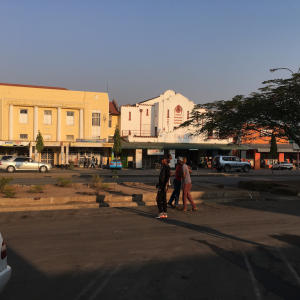 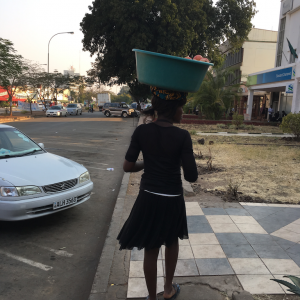 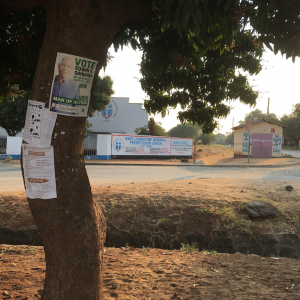 Although this was the capital when Britain ruled it as a territory or protectorate, there is little colonial architecture or even influence apparent on the streets.  There appears a small active commercial center but it is all sparsely occupied compared to any similar size town in, for example, India.  You can walk across the street between passing cars without any problem.  There are a few bicycles, small cars and taxi cabs for the tourists.   It is all very quiet and peaceful except, if you are a tourist, for the approaching tradesmen trying to sell you their carved wood souvenirs.  Women walk down the street in their colorful cotton prints with large bundles balanced on their heads.  Men politely say hello.  I would not describe it as charming as the architecture is ugly and unharmonious but it is a quiet peaceful basic town in a developing country.

Tourists come here from around the globe to see Victoria Falls, one of the “seven wonders of the world” and still considered one of the great natural sites on earth.  And it deserves the accolade.  Arriving in the early morning before many others have arrived, the roar of the falls is heard and then we experience the vision of a moving wall of water arching around a gorge, with spray reaching upward to form clouds of water vapor.  For this reason in the local language this place is called “Mosi-oa-Tunya” or the “Smoke that Thunders”.  And there are unbelievable rainbows that arch across one side of the chasm from the sun on the water.  It is a long ways down and there are only flimsy railings and a slippery always wet suspension bridge at one point.  This is the Zambia side and across the Victoria Bridge is Zimbabwe, requiring another visa and park entry fee.  The day  before I met a woman who told me her bag was snatched off her shoulder from one of the numerous large baboons wandering in the park, trying to find food among the visitors’ luggage.  No one came to her rescue, she received a large bruised shoulder and her camera and personal items are now scattered around and down into the swirling waters.  These numerous baboons are heavy-weight animals and not to be considered cute pets. 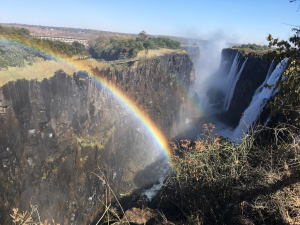 We are able to walk upwards to the spread-out waters of the Zambezi River at the very top of the falls before they are channeled downward with huge energy into the ravine below.  Up here, the river seems a slow and peaceful flow and, as it is low water season, islands of lands rise scattered across the large expanse of the top of the curved gorge.  It looks like you can skip from pocket of land to pocket of land and we see some tourists returning from such an adventure — with the park guards waiting at the side of the path to take the trespassers to the office for some reprimand or fine (the park is clearly marked that such a jaunt is not allowed).  At the top, you can still see the nearby rising cloud of water spray and the loud roar so there is a disjunct between this peaceful water scene and the tremendous show of nature’s force below when the land ends. 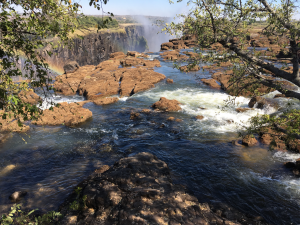 At the top of the Falls

In the evening, I leave our group to attend a dinner outing on a 1922 steam train that was built by the British and once chugged up and down the country and is now renovated in luxurious style for tourists.  In addition to an excellent lecture by a Lusaka-born man and a fabulous 5-course dinner (I had checked in before to request vegan food cooked by the only 5-star hotel in town), I met a family about whom a novel could be written; grandparents who were immigrants from India to Northern Rhodesia, pressured to leave upon independence, their offspring and grandchildren now scattered around the world.  I felt a greater reality and connection to this country from hearing their stories, a now past-world made real by recollections of the past and by a discussion about the present. 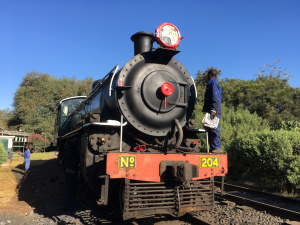 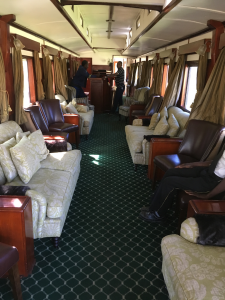 The train stopped so we could experience sunset on the VIctoria Bridge, opened in 1904 through the efforts of Cecil Rhodes, and still in use between the border of Zambia and Zimbabwe. 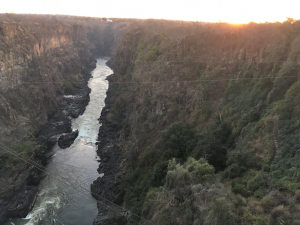 The next day we had a chance to talk to 2 local Zambian woman, thanks to Carol’s connection to the SERVAS organization – both successful career woman, both widows with children, who have been able through education and perseverance and the strength of their own character to make full lives for themselves in the new Zambia — one who is manager of the gift shops at the highest end hotels in town, one who is the HR manager of the National Museum in Livingstone.  Both warming and welcoming people.  Below is  Funase Chitsulo with us at a restaurant. 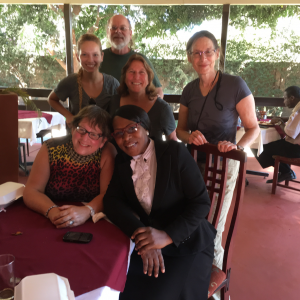 We visited the Livingston National Museum which is a combination of very old dusty poorly lit exhibits and excellent written signage and commentary, discussing local tribal life passage customs (the “Do’s and Don’ts of Pregnancy”, puberty rites for both boys and girls with photos that look like 1930 National Geographic images, and marriage traditions).  It has a room dedicated to the history of David Livingstone with his actual clothing and other artifacts as well as a well-done history of colonialism up to the present time — or rather up to about 5 years ago as it stops with a president who died.  A group of school children arrive as I am about to depart and I can tell some of the exhibit are directed toward this age group with a discussion about the difference between “our village” and “their town” and the statement that the benefits of the flight to the big cities are a “mirage”. 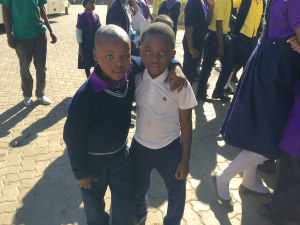 Schoolboys In front of Museum

We are  now at the border with Botswana where truck drivers may need to wait up to a month to be allowed to cross.  There is no bridge yet — one is finally being built which will be completed in about 5 years and will change the economics of the region.  Now, every vehicle has to cross on a small ferry.  The drivers have set up a small camp to live in while they wait. A woman is sitting on the ground with bags of white bread floor to sell, some wrapped in colorful fabrics, some in plastic.  Others have set up tea stalls and small food shops on the dirt by the road.  It took a great political effort and a lot of borrowed money for Botswana and Zambia to set the stage for this bridge project which will greatly impact life in this immediate area.

We will be returning to Zambia in a few days.

Our whole group at the Victoria Falls 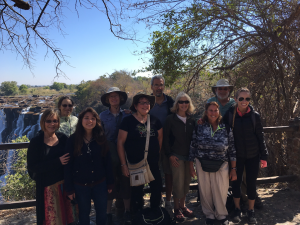