I did not come here for the animals but now that I am here in Chobe National Park in Botswana, in an open vehicle, moving through parades of elephants, journeys of giraffes, pods of hippos, troops of baboons and dazzles of zebra — it is impossible not to be awed by the power of this natural world. 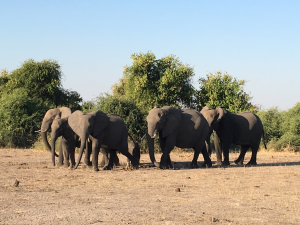 Having passed out of Zambia’s immigration shed, transferring ourselves and luggage from bus to a small boat, crossing the river and reloading onto another bus and then going through Botswana immigration, we are finally in Kasane and were able to revel in a late afternoon cruise on the water, watching elephants, crocodiles, impala and kudu watering themselves as the sun set. 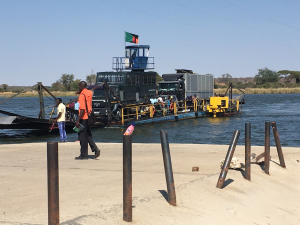 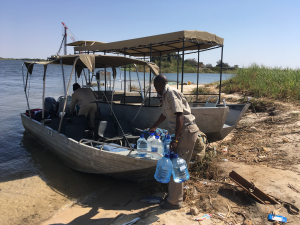 Our ferry for 10 plus luggage

Kasane is a small village formed by the local tribal peoples who were removed from the area when the park was nationalized.  The town is comprised of a line of small hotels by the water to accommodate the tourists, a strip mall with a “Choppies” supermarket and a local airport.   Botswana is 80% desert (the Kalahari is here) and only 2 million people so although covering a large area, it is sparsely populated.  We passed through the convergence of 4 nations where the Zambezi river splits into different tributaries and Zimbabwe, Namibia, and Zambia are all nearby.  We heard the story many times from our guides how Botswana and Namibia both claimed an island on their mutual border which is a splendid habitat for many of the roaming animals.  And that, with a jab at  Nimibia’s moral stand, Namibia wanted it only for farmland while Botswana looked at is as an important animal refuge.  The case was taken to the international court in the Hague and Botswana won as it was determined whichever channel on either side of the island was deepest would be determined as the boundary and, upon measurement, the Botswana side of the island was deeper. 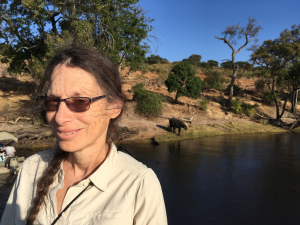 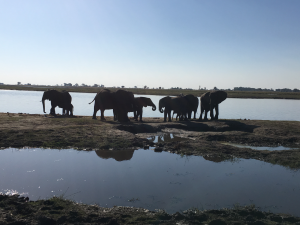 On the Chobe River at twilight

My immediate sense, which could be wrong, is that Botswana is more economically developed than Zambia.  The infrastructure seems better, the homes and shops seem slightly more upscale, and the people seem more content.  This would seem to be true if based on the immigration structures at the border we just crossed.  Botswana was more efficient, had a decent bathroom, clearer signs, and a health tent with a required step-through pan of some kind of disinfectant.  And boxes of free condoms in the immigration office.  Truckers, away from home for long periods of time, have been notorious transmitters of AIDS so having free and easily available condoms is hopefully helping this issue. And truckers are the main group in transit through this area. 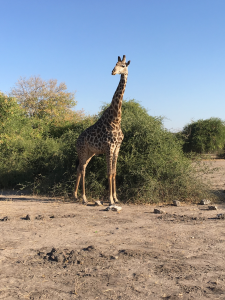 We do three drives into the Park, each one an amazing encounter with wildlife.  We were told by more than one guide that the park is ideally sized for about 11,000 elephants.  But that the park now holds over 120,000 elephants (about 25% or more of all the elephants in Africa).  Various efforts at relocation, sterilization or containment were attempted and have failed and the result is serious stripping of the vegetation by these large beautiful mammals so that our guide says it looks quite different from 10 years ago. Deforestation by non-humans on a large scale. 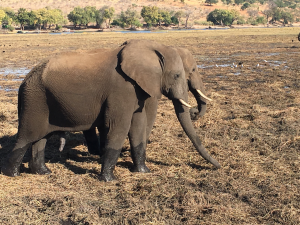 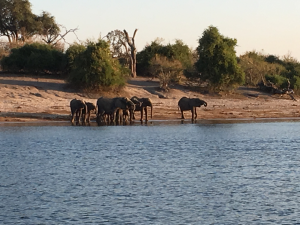 Riding along in the big jeep on dusty rutted roads, the landscape is dry with a variety of scrubby trees sloping down to the water.  In addition to the mammals, there are a great variety of birds — water birds and land birds.  Egrets and ibis, an African fish-eagle which is now the national bird of Botswana and the most beautiful bird I have ever seen, the Lilac-crested Roller.  Although there is a sameness to the setting, there is the great surprise to be found around every curve in the road that makes the experience so awe-inspiring  — suddenly there are a large group of elephants walking down to the water of various sizes, from baby to great monumental sages, or on a hillside there are elegant giraffes you could almost touch or you see a large number of sprinting impala fleeing in unison upon your approach or families of baboons on the roadside grooming their offspring. 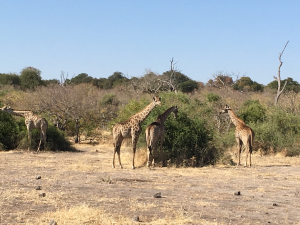 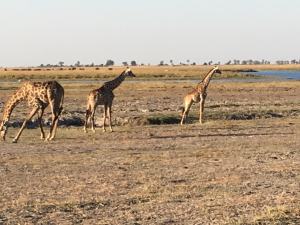 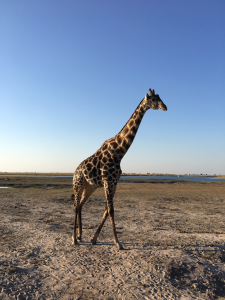 Some of our routes took us down by the river and onto flats interspersed with water holes in which there were floating rocks that were actually numbers of hippos.  And all around the water are sunning crocodiles, young ones barely two feet long to mature reptiles of several meters in length. 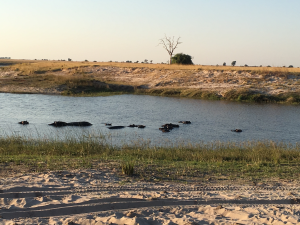 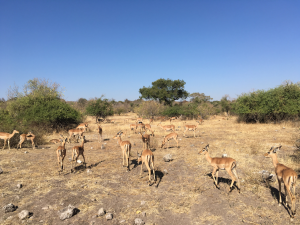 Impala grazing in front of us

Driving along, the elephants are everywhere and always magnificent.  Twice there were bellowing roars as a young bachelor is chased off to join another pack.  The sun begins to set and the light on the backs of zebras are unforgettable.

The laws of the jungle assert themselves in front of us as we see an injured male hippo, alone and nursing his bloody wounds, who lost the fight for dominance over the pod.  And, overhead in a tree, our guide points out something I was hoping not to encounter — the hanging head of a dead impala, half-eaten by his killer leopard who was away too fast for us to glimpse. 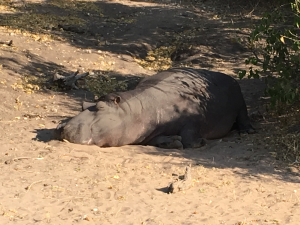 Our safari rides took us over the same paths more than once but each time, in a different light, it was a totally different experience.   My friends who went out very early one morning saw some lions in the distance in the grass but I would as soon avoid the carnivores. 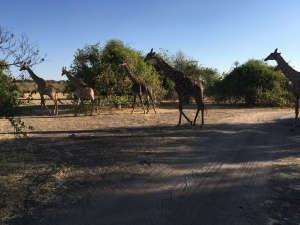 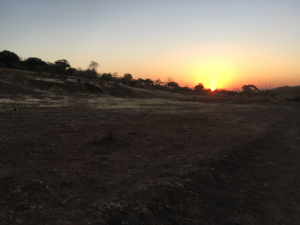 Our bush camp lodging allowed us to sit on a viewing platform at night at see elephants and giraffes appear suddenly out of the darkness into the spotlights to drink by the nearby pond.  My cabin-on-stilts had a full wrap-around porch and view onto the bush landscape and all night Carol and I heard the calls of jackals and hyenas and the occasional elephant call.  I woke up at 4 am knowing I was hearing the sound of lions and pulled out my binoculars and stepped out onto the cold porch barefoot but see nothing but the shadows of trees and grass.  In the morning, Laura also said she heard their call and had gone out to look but saw nothing.  Although there was no lion sighting last night, up above the milky way was bright and clear and the sky of the Southern hemisphere burned brightly in the cool winter air. 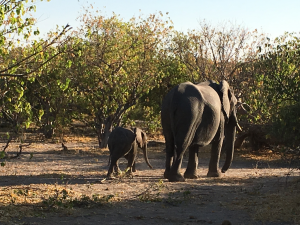 I am enjoying myself.