Johannesburg:  A Tale of Two Cities

Johannesburg has been a surprise.  After a 40 hour flight due to a delayed plane and missed connection, my taxi in Johannesburg immediately encountered rush hour morning traffic, made considerably worse by heavy rain.   I was told this was an unusually heavy first rain of the winter season and later in the day a tornado swept through a poor district of town injuring many people and taking the lightweight roofs off 400 homes. The high quality of the roads  has been unexpected as well as the large number of new cars with single drivers commuting to work, reflecting a rising middle-class prosperity.  I ask Raymond, my driver, whether residential areas are self-segregated and he replied that they are mainly all white, all black or all Indian with a few more integrated parts of town. 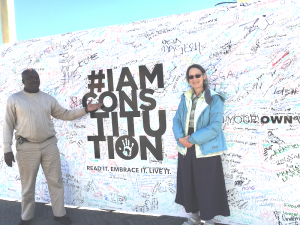 In Constitution Square with Nelson

Our beautiful small hotel is in Sandton, a suburb of Johannesburg to which the wealthy fled in the 1980’s for space and security and which now is becoming the commercial area of the country as private businesses have left downtown to set up their offices in a more protected environment.  The area of our hotel is where the uber rich have mansions the size of small kingdoms.  What immediately stands out for me is that every home and apartment complex is surrounded by a very high fence and often a guard house, both small houses and large ultra modern apartment complexes.  We were told that thieves frequently climb the fences and break into houses so that being aware at all times of security is important.

Carol and I finally gratefully meet up at the hotel, given the uncertainty of my arrival time and we drive into the countryside where rolling hills and dry grass spread out and where the world heritage site, the Cradle of Humankind, is found.  Here were uncovered some of the oldest remains of the human species and the museum is an interesting combination of educational center and theme park:  we went down a tunnel onto a small raft which took us on swirling water “back in tine” to the ice age (where real ice surrounded and dripped around us) through erupting lava and to the big bang.  Very unexpected. 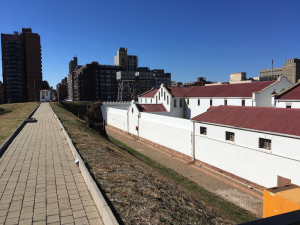 Passing by the World Cup soccer stadium, we visit the Apartheid Museum, a world class exhibit showcasing the history of Apartheid and the resultant suffering it caused and the work it took to bring it to an end.  And Constitution Hill where some of the worst aspects of oppression took place and where the new constitution was enacted. 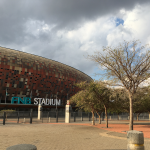 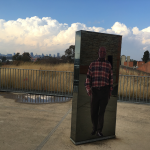 Apartheid Museum with Johannesburg in background 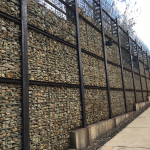 And everywhere we went, it was spotlessly clean.  No garbage on the streets, well maintained curbs and sidewalks, houses big and small well taken care of.  The Rosebanks shopping mall, near Sandton, contains expensive name brands and a supermarket equal to a very high end Whole Foods at, for us, Costco prices.  And the public rest room was a pleasure — cleaner than anything similar in the U.S.   Although the mall was not crowded and we were there at closing time for most of the stores, the shoppers were about 80% black so although this is not a site for any low income residents, it was being well utilized by a local cross-section – with money.   Every parking lot has security guards and security men in the mall were noticeable.  I asked Nelson, our driver, about why there was no garbage on the streets and he said because of strict regulations.

I have asked myself whether the sense of order and cleanliness I have seen was cultivated within the culture through the Dutch/Africaan stereotype of spotless housekeeping or by fear of punishment or by some other inbred qualities of the local people as well as the colonists.   Certainly fines and public disapproval have not worked in the U.S.  It takes people not only compelled to scrub down the environment but people who actually want to try to see things shine.

From this modern venue we headed into the other city, Soweto, the center of the large sprawling black township which held a large percentage of anyone of color under the apartheid regime and where we visited Nelson Mandela’s home, passing through hillsides covered with small homes and the occasional area (our driver notes “not yet cleaned up”) of corrugated shanties.  We did not get into the heart of the poorer sections where I understand the government has provided common toilet facilities, 1 for each 4 families. 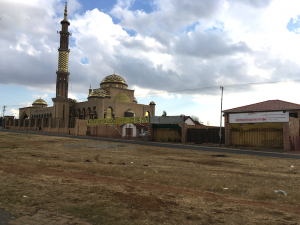 On the poor end of the spectrum from Sandton is downtown Johannesburg where, we were told theft and assaults have caused business after business to close and move out within the last 10 years.  Squatters have moved into abandoned office buildings leaving broken windows and curtains fluttering into space.   Most tourist hotels have closed down as visitors do not wish to risk an area where bag and phone snatching is a common occurrence.

Small ground floor business were open, some of high quality, trying to make a go of it, but with only the government buildings still functioning, the number of prospective customers has decreased dramatically.  This is the other city, a place of worn-out dreams and hard living, where opportunities are scarce and advancement difficult.  Yet, still, relatively clean for an inner city. 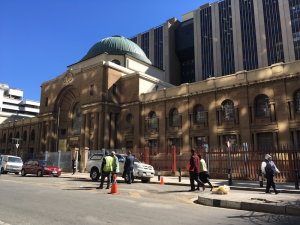 The sun has come out as we leave Johannesburg and head down into the underground to catch our train to Capetown.