It is night and I am lying in my bed under a mosquitos net in a large tent at my camp near the South Luangwa Park listening to the sounds of hippopotami making loud grunting sounds in the river below, elephants eating branches and leaves off the surrounding trees and the low growl of perhaps lions or hyenas.  As the birds wake up at 5:30 am and first light begins, I can hear a symphony of bird calls, from deep barks to high trills and whistles.  This is magical for my urban-raised ears but I can understand how to people in the villages I have passed through these sounds can mean danger and bring apprehension and fear.    We have heard of situations where angry animals were damaging and threatening villages and government hunters were called to remove the threat one way or another. 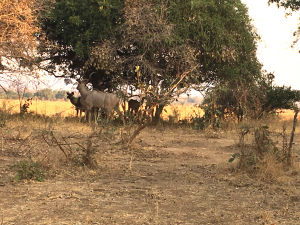 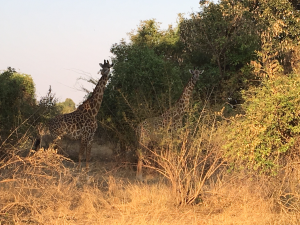 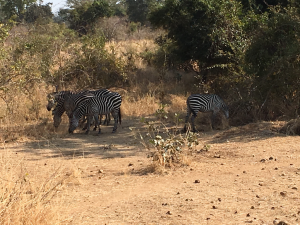 We are at Flat Dogs, one of the many luxury tourists camps set up near Mfue to cater to people from around the world coming to enter the park and enjoy the plentiful wildlife.   This is a major source of revenue for the area although we have learned it benefits the government and the private owners and not the people to whom these lands once belonged, although it is also a source of employment for locals.  There are small houses, called chalets, on the property and luxury tents with a central area for eating and drinking and for occasional use of the sometimes working internet.  My tent has electricity and a king bed surrounded by a mosquito net, with plenty of area for a desk, chairs, and a beautiful open-air bathroom (with a screen door that needs to be locked to avoid monkeys and baboons coming in) as well as an outside porch.  But the excitement is between the crevices of what has been built.   We need to be escorted by guards always at night and sometimes during the day to our rooms as there are often elephants and hippopotami blocking our paths.  When we first arrived, we thought this was a warning but not a common occurrence but every might and almost every day we turn a corner to discover one or two or a family of large grey elephants or a massive hippopotamus, which is more dangerous, calmly eating and we must back up slowly and wait.   Here is a photo during our breakfast this morning from our table without any zoom. 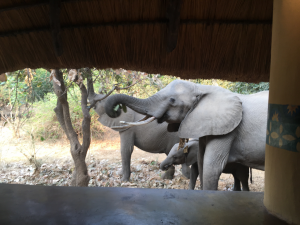 Our days have been spent on early morning safari rides, in an open vehicle that enters the park at 6 am and which returns us back to our camp at about 10 am.  And then a late afternoon ride to see the setting sun, have drinks in some scenic place and then do a night drive with a spotter shining a large flashlight trained to find the more nocturnal animals.  The sun rises early and quickly and the air is cool so we sometimes use the blankets provided in the vehicle until the sun begins to warm us up.   We quite often go off-road, heading onto a flat plain or across a hardened riverbed dried now in this rainless season.  In the evening, we stop and watch the sun go down, always a red blaze that deepens into the colors often portrayed in African art. 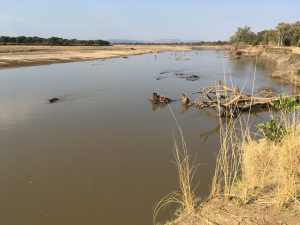 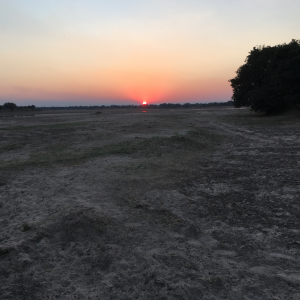 There are areas of dry brittle trees and shrubs, where we have seen wild African dogs, an occasional leopard and lion, more open fields where impala, bush bucks, kudu and puku eat and play, copses of trees where baboons and monkeys are found and around corners where are the unexpected mongoose, hyena, jannet, warthog and bushbaby can be seen.  Near the riverbanks in the water there are always many hippopotami and crocodiles.  We drive and then slowly between the trees we see hardly discernible among the foliage the towering neck of a giraffe walking toward us with some of his family unexpectedly appearing around him or in the distance the black and white of the magnificent zebra who shine even more brightly as we approach.  It is a bird lovers paradise, some startling bright blue or red winged beauties and blocks of more subdued sparrows and starlings and waterfowl.  We see storks standing on one leg in the water and large eagle-like creatures in the trees. 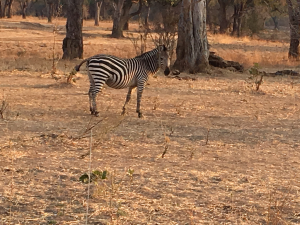 One of the most impressive sights I have seen s a large parade of elephants crossing the river.  One sunset we were able to see about 50 elephants, of all sizes, some playing with each other, babies next to their mothers, walking across to the other river bank while our jeep sat nearby in on the edge of the riverbed.

The air is warm in the afternoons and by the time it is dark, we put on light  jackets.  It has been magnificent riding above the ground with the heated smell of the land and the scent of the animals moving against and past us as we drive along. 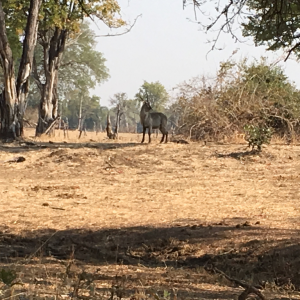 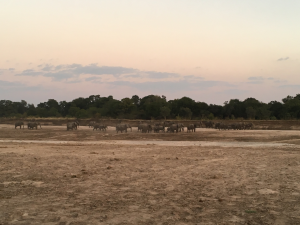 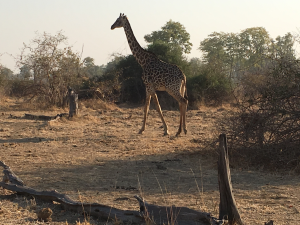 One morning we are taken on a walking safari into the bush, with a trained guide and a government park ranger, dressed in camouflage with a loaded rifle by his side. 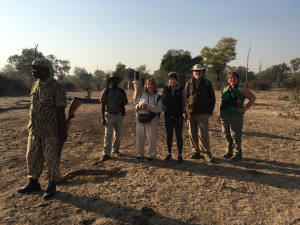 Our park ranger on the lookout.

Soon after we get out of the car and while our guide is showing us ebony trees and their fruit, we look up to see a mother elephant with her baby who begins to trumpet and move toward us.  We are told to very quickly back up single file and head up a narrow path under some bushes and so we flee with our guide in front and the ranger behind who has already cocked his gun.  Later he tells us in a few more seconds he would have shot above the elephant’s head and the guide indicates to us this was one of the more perilous situations he has encountered in his 15 years of leading walking safaris.  I cut my finger on a sharp thorn bush during our flight which the guide bandages when we are safely on a quiet plain.  There we find giraffes and waterbuck, have our morning tea, and find the bones of a hippo before we walk back to our vehicle — where we need to wait at a distance until the elephant eating berries next to it decides to amble off. 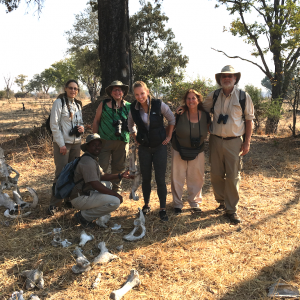 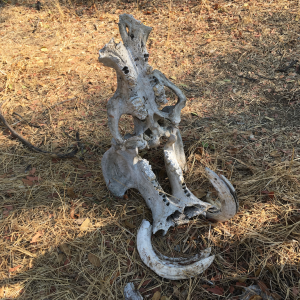 On another day we see fairly close a known pair of lions during their 4 day mating season when the male mounts the female once an hour – this pair who are well known have not yet had children and hopefully this will do it.  One day we race around over rough roads to follow a pack of wild dogs, a breed decimated by rabies, and difficult to see. 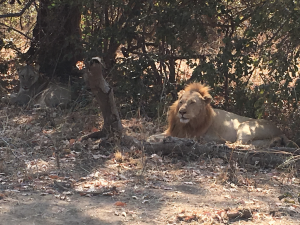 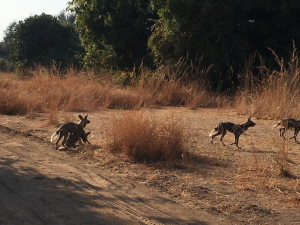 One night a group of vehicles crowd around a leopard sitting regally before us.  And a spotted hyena sleeps by the side of the road while spotlights shine upon him.  Our last night we are all treated to a close up encounter with the same two lions we had seen earlier, walking across the road toward us and then curling up and sleeping peacefully together, seemingly undisturbed by the bright lights. 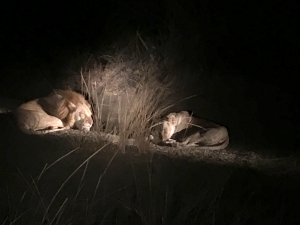 Our last evening we cross a river to drive through a different part of the park — the ferry crossing a lightweight raft pulled on a cable. 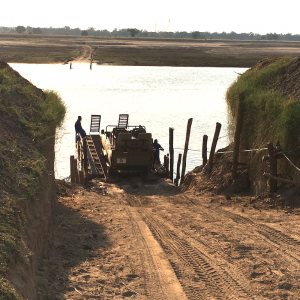 And one afternoon, I luxuriate with a massage in an open air pagoda over a hippo lagoon. 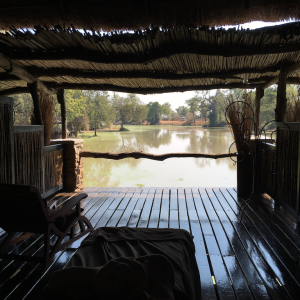 Our group has periodically sat in a circle and discussed our experiences and our reflections on our experiences.  For everyone, seeing the animals in the wild, characters of our childhood books and our imaginations for so many years, is an extraordinary experience exceeding our expectations and touching our hearts in a meaningful way.

We are getting incredibly good food here, little sleep, and a much excitement and the joy of living in the moment.

Disclaimer:  I am not a photographer and am using only my small iPhone SE which is not a safari grade camera.  Others in our group will have much better photographs and maybe I will switch out some in this post for theirs in the future.