Outside the boundaries of the South Luangwa Park, lies a protected zone with six historical tribal areas of different sizes each ruled by a chief and each tribe has a community resource board that, among other things, administers the division of revenue derived from hunting licenses in the joint tribal area.  Today we visited the Community Resource Board (CRB) of the Mnkhanya Chiefdom, the largest of the six, that controls about 40-50 villages and 20,000 people and we had an audience with  the chief of this tribe. 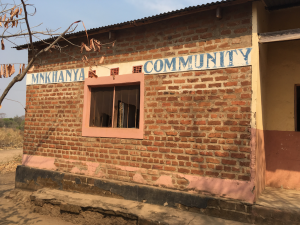 The CRB is housed on a quiet empty road surrounded by dry fields in a concrete building that is cracked and disintegrating but it is here that the local chosen leaders meet to discuss issues of critical importance to the community – conservation of resources and anti-poaching among others.   The administrative head of the CRB, Isaac, is welcoming, articulate and open about his concerns.

Issac teaches us the proper protocol for greeting the Chief, kneeling on the ground on ones knees and clapping successively from loud to soft about 11 times and saying “Yo Chelo” which means, “Your Kingdom”, which we all do when we enter the chief’s compound and are seated on chairs in front of him.  Before we reach him we wait and see from a distance a local villager giving the appropriate greeting and placing his problem before his chief.   When it is our turn, and have done our obeisance, we ask him questions.  He has a strong presence, calm and open and appearing to be genuinely happy in the moment.   He is 65 years old has been chief for about 20 years and radiates an aura of wisdom that instills trust.   We learn that the successor chief is chosen by the present chief from among his nephews and nieces, never his children (just think how different English history would have been if children were not allowed to succeed) and based on the chief’s view of the wisest of the group.  We asked if he had chosen his successor and he said he has but only the government knows who that is.  He asks us if we would help his community by funding some needed projects:  many of the villages he rules do not have a safe water hole and are drinking from the same source as the animals, some only have a thatched roof school room and no resources and could use any school supplies we could provide.  We ask about cost and a good well cost about $1000 and a more secure concrete encased bore hole cost about $4000. 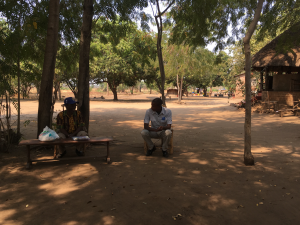 Speaking with the Chief 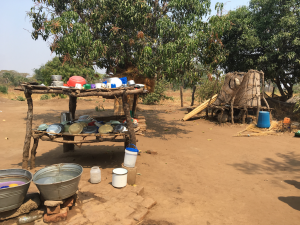 Inside the Chief’s Compound

The compound itself is the “Palace”, comprising a concrete building where all of the Chiefs relatives live, his wife (only 1 as he is devout Christian we are told), together with his children and grandchildren and other relatives.  He does have a concrete well which I understood was shared by other local tribe members but this is no regal abode.  We have a chance to briefly meet his wife with the younger household members shyly standing at the doorway and then walk back to the CRB where we are given a delicious large meal of nishima, the staple ground cornmeal which resembled polenta, greens with ground peanuts, cooked tomatoes, chicken and a cabbage slaw — and the special delicacy, fried caterpillars which some of us do eat. 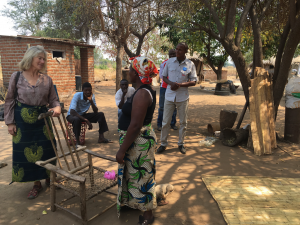 With the Chief’s Wife in the Compound 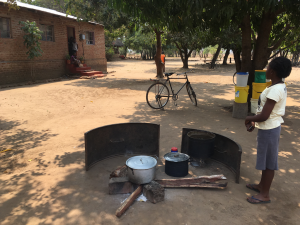 We stop at a project which the Chief described as the priority decided upon by all the local chiefs — each would build a guest house which could generate income for the tribe.  We are proudly shown what they have accomplished but I am surprised and a little taken aback by what I see:  located in an unoccupied area off the main road, past some more middle class suburban homes, and not scenic or interesting or near anyplace that could be easily visited.  The buildings are a set of 8 small rooms each with what will be an attached bathroom, constructed out of sloppily mortared brick.   The bathrooms are a concrete slab on which sits the brick and no provision has been provided for putting in the planned bathroom plumbing or fixtures.  When I ask about this, I am told they already have arranged with the plumbers who will go underneath the concrete for the installation.  Not an efficient or good design by any means.   We are told they need $4000 to complete the construction but I doubt any foreign tourists would find the place interesting or attractive enough to come.  Laura tells me later that she thinks they are also hoping for local delegations who need conference or meeting space and I truly hope this works out for them but it reminds me of problems of development when there are different cultural expectations of what needs or should be accomplished. 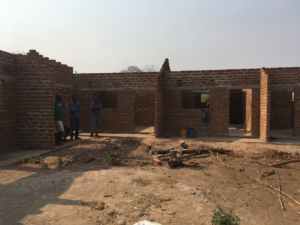 At the building site of proposed community guest rooms

A short stop at the beautiful Tribal Textile workshop and store, where someone did understand what tourists would want using Batik techniques to create attractive home furnishings – and charges accordingly.  We sat in a circle once again and spoke together before separating as most of the group departs for home.  I know all who left feel enriched by their contact with Africa.

I remain here with Melanie, Laura and Tom and we head off to North Luangwa Park..