Flying in a 6-seater chartered Cessna prop plane, Laura, Tom, Melanie and myself fly North to the least developed and isolated game park in Zambia, the North Luangwa Park.   In our 40 minute journey in the air, we see below us a large expense of uninhabited land crossed by many dry creek beds and rivers.  It is an arid landscape with little green foliage, the passage of time marked by the color variation in the rings around the very low or now dried water holes.   This must look immensely different in the wet season. 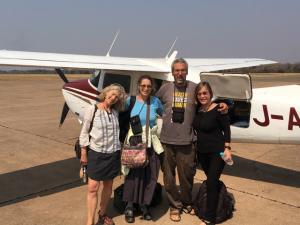 We land on a small landing strip on a plain that looks like it may be at the end of the earth — stark red soil with dead trees as far as the eye can see.  I wonder what I have gotten myself into.  But there are 2 safari jeeps waiting, one for our pilot and one for our group of four to take us to Buffalo Camp, one of the only two camps allowed in this part of the park.   The park guard with loaded rifle rides gunshot as we drive through a rather desolate landscape of dead molpane trees stripped to death by an overabundance of elephants before poachers in the 1970’s reversed the trend and killed almost all of the elephants and all of the rhinos who lived here.   But the molpane trees have not returned to life.  Melanie asks the guard to point the rifle away from her as he carelessly climbs on with his weapon into the open vehicle. 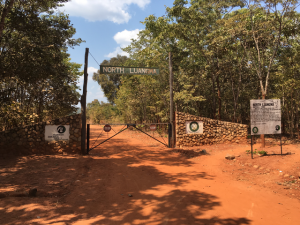 Our camp is a surprise to me after the luxury of our stay in South Huanga Park:  a very basic open-air thatched roof communal dining room, several huts for cooking and for staff and 6 individual “chalets” which have 3 thatched walls and a fourth with open half-wall looking over the river.  There is an attached bathroom, also open air with thatched walls, but amazingly in this environment a flushing toilet, sink and shower with hot water.  There is a large drum above the bathroom area containing gravity-fed cold water and a drum for hot water is on an elevated stand separated from the cabins which drum is continually heated by a wood fire (thus the safety precaution of distance from the thatch).  It all works and as I lie here on my bed in the mid-afternoon lull between our safari walks and drives, I appreciate and very much like the setting and arrangement.  There is a soft breeze blowing around me.

View from our tent cabin 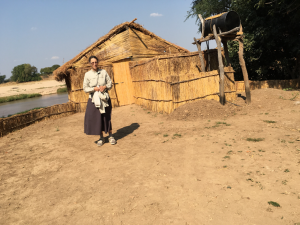 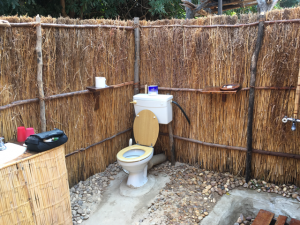 We are told this camp is open May-October after which the entire camp is taken down and trucked out including the removal of the toilets set in concrete and the water lines, as if it was never there.  The next season it takes a month of construction to resurrect the camp for the next season.  Which is why it is quite expensive to stay here, with the opportunity to see no one outside the camp for days and to have a game park virtually to yourself. 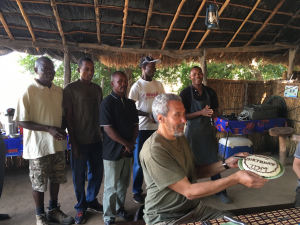 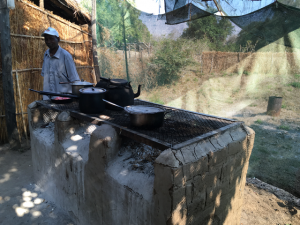 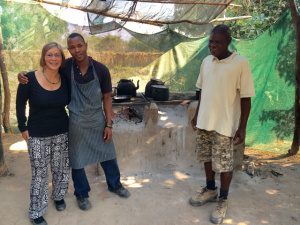 This is another world from our earlier experience.  Although the landscape is not that different from South Luangwa in terms of the flora, everything seems more spread out and open.  As one of the other guests who was born in Northern Rhodesia, now Zambia, and has spent most of his adult live in Capetown, South Africa, said: this is one of the few remaining places of the “real Africa” wildlands.  At first, on our initial outing into this land, where the animals are far fewer and far harder to see than in South Luanga Park or Chobe National Park, I wondered why that may be a positive advantage but slowly the realization came upon all of us that here the animal inhabitants are truly wild and their behavior quite different from our prior contact.   In the other parks, the animals have grown up from birth with vehicles passing by every day and with bright lights being shined into their environment every night which they accept that as part of their daily life.  The zebras continue to graze, the giraffes continue to walk around and the elephants walk across roads knowing that the metal boxes filled with strange creatures are not a threat to them — except, perhaps, when we on foot approach their offspring (as we experienced with the trumpeting elephant protecting its young in South Luangwa). 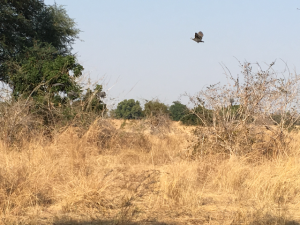 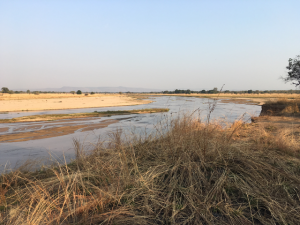 But here the animals are always startled, wary and surprised to see us, they stop and watch us, and then respond in a way we have not seen before:  the zebras prance and jump and run like my image of wild mustang horses, the impala and kudu and puku run streaks across wide open plains and jump playfully into the water, the elephants are often solo and look and watch quietly, silently, contemplating the moment knowing their size dominates all.  There are no giraffes here as there is not enough high foliage for them.  But there are some creatures we have not seen before:  wildebeast, honey badgers, spotted eagle owl, and large herds of buffalo, 100  or more in a group.  They bring to mind the great numbers of bison which served as food for the local tribes on the plains in my country before greed and disrespect for the local culture wiped them out — in the same way the rhinos were exterminated here.

Then there are the unexpected moments:  the spitting cobra which we passed today hidden in a tree limb, only his tail visible.  So many amazing birds, a birders paradise.  The family of bee catchers is the most beautiful —small fluorescent blue and green sparkling in flight. And all the water birds.  The hyenas roaming to pick up the remains left by the large cats, including bones which are an important part of their diet.

One of the special things here is that we can go on long walking safaris, led in single file by our armed park ranger, then our guide followed by our group with someone carrying the water and satellite phone bringing up the rear.  Lion tracks are everywhere and the remains of their impala kill are visible on the ground, evidenced by some tufts of fur and claws.  The baboons jump among the trees but have not learned to steal from people, the warthogs mix with the elephants and kudus, the cat-like genets and civets slink in the dark, and the red-billed francolins walk across the road and do not yet know to fly away when our vehicle approaches.  On one of our walks, we cross the river, taking off our shoes and socks to wade through soft sand and cool water, before continuing along the banks and inland to study tracks, examine trees and see the swift flight of startled animals. 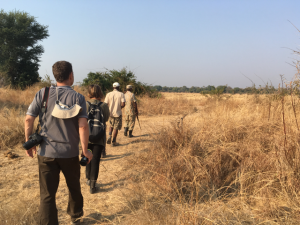 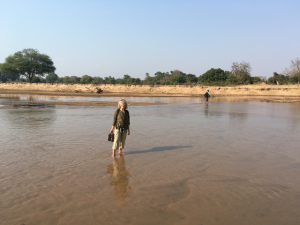 At sunset we are taken to an escarpment at the edge of the park where the river is slowly flowing and where in the water many hippos are partially submerged, with babies learning how to land gracefully in the water from the sandbanks.  There are zebras and impalas and elephants in the distance while the sun casts a warm light.

It is the day we leave and we get up early to catch the morning light.  From my hut I see a stalking hyena across the shallow river and a kudu hiding from it in the bushes.  Last night, for the first time since our arrival into Buffalo Camp, there were no elephants invading the camp.  The night before a lone elephant crossed over and ate the thatched roof of the workshop which will need to be rebuilt; and a German traveler staying here reported that in the middle of the night he saw an elephant’s trunk waving around his bathroom from over the wall. 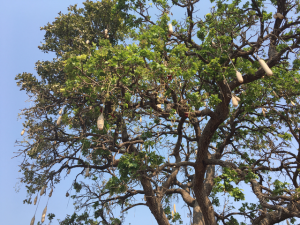 The most memorable sighting this morning was of 3 roosting Maribou storks on large nests high in a tree, some of them with new young, and looking like fierce parents who would not brook any interference with their family.  And a most memorable view in new light of a flock of sacred Ibis, hammerkop, various egrets, yellow-billed stork, saddle billed stork, landing on the sandy outcroppings in the diminishing river, oblivious to all but their immediate need to eat and protect themselves in this wild Africa. 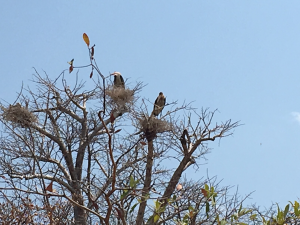 The changes of light are remarkable. The sun rises quickly and the red globe on the horizon quickly changes to yellow and the cool morning swiftly heats up so that by 11 am it is quite warm.  And then at about 4 o’clock in the afternoon, the angle of the sun spreads a warm pink glow over everything until it slowly diffuses the western sky with a red hue. 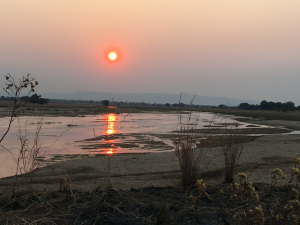 We return to a more urban setting today when we drive to the small town of Mpika.