I am in a tent under a full moon in the Bangweulu Wetlands Park in Zambia.   We are the only ones camping here — we are the only car we saw  going our way on the  grueling 7 hour car trip over very rough dirt pitted roads from the small town of Mpika.  We were told it would take 3 hours.  This is a journey only for the intrepid or the uninformed. 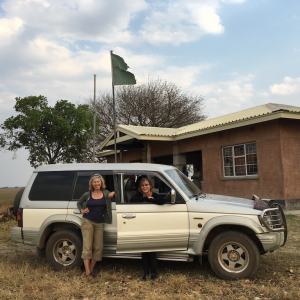 Upon our arrival at Park Office

We arrived into Mpika the previous day from Buffalo Camp in North Luangwa, also over rough dusty roads (although well maintained compared to what we experienced today) so that we were covered with reddish dust upon our arrival at Bayama’s Hotel, a small group of cottages run by a German ex-pat.   Mpika is a small town with one main asphalt road with groups of low concrete buildings with dry empty space between them and a nearby one street town center with a row of shops..  The shop buildings all over Zambia have similar hand painted black-lettered signs announcing their business:  God is Able Hardware Store, Biggie’s General Trading Store, Salvation is Here Bakery.   Outside the main thoroughfare, with several petrol stations and banks, are attractive small concrete homes, often shaded by trees and plants.  Mpika is elevated a bit and cooler than the parks we were in.  On our drive, as we approached the town, the most obvious other structures were the numerous churches, a large Catholic mission and cathedral-like structure, more than one modest Kingdom Hall of Jehovah’s Witnesses, which sect we understand is widespread in Zambia, and a Pentecostal Church, among others.  The German ex-pat tells us that when you have nothing and are given Watchtower as your only reading materials for months at a time, you begin to believe what you are being instructed is the only way to think.  He also ranted about farmers being given free non-germinating seeds, they cut the trees and brush and burn them so they have rich soil and the first crop is very good.   And then they are forced to buy more seeds the next year from a large company, like Monsanto, but their crop is poor unless they also buy fertilizer and insecticide and so they go into debt and become reliant on the expensive seed rather then following the techniques of their fathers and grandfathers, savings seed each year for the next.

One reason we are here is because of Tom’s connection with an award-winning conservationist (he won the Goldman Prize for Conservation a few years ago), called Hammer, short for Hammarskjold  (named after Dag Hammarskjold and if you don’t know who that is you are under 50 and need to look him up).   We were originally to be part of a conference he was organizing but the date were changed so now we are meeting and talking to him about his projects and he is the one who organized our trip out to Bengweulu. 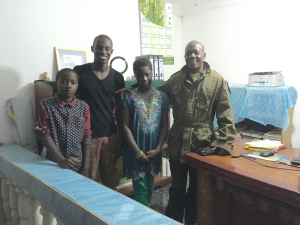 Hammar and his children at their home in Mpika

Aside from the intense jostling in the car with the 5 of us, the journey to Bengwuelu was very interesting as we passed by many groups of huts and houses of the local people of this area who are traditional fishermen when the rainy season comes and dry farmers during the other months.  There are women outside with babies on their laps and strapped by colorful cloth to their backs, children in torn t-shirts waving to us (and asking for our used plastic bottles), boys on bicycles and fields of cassava bushes waiting for the rains. 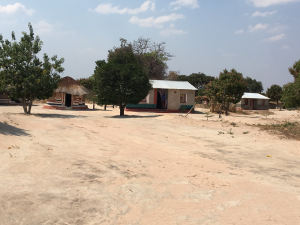 There are girls no more than 14 with babies at their breast and younger girls with their young brothers on their backs.  We passed some boys pumping water at a well and we see every once in a while a soccer field laid out in the dirt, with branches for goal markers.  The huts are whitewashed mud blocks with painted designs around the bottom and a thatched roof, slightly more prosperous looking than the ones in Kawaza village.  Nearby is often a small round open air pavilion, perhaps used for storage or for living outside in the heat.  We see brick kilns and the occasional water hole and the children, unlike elsewhere have been, cry out for us to give them candy and discarded plastic water bottles.  It makes us feel uncomfortable.  This is not the warm friendly greetings we have a been used to but some learned behavioral reaction to foreign tourists that is not beneficial to anyone. 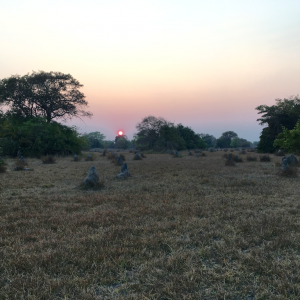 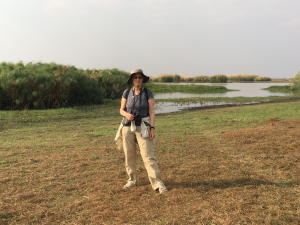 Our outdoor camp is surprisingly comfortable:  there are two designated camping areas, each under trees and we are the only campers in the whole park.  There is a latrine and water jugs for washing are provided.  We had brought our own wood for our cooking campfire but some additional kindling is given to us as well.  Spaghetti cooked under the Southern stars by Laura.  A manager checks us in at night and makes sure everything is returned to way it was in the morning.  We have tents and thin mattresses and blankets which Hammar got together for us all (he is with us) and all is well.  We are located in an area where there are numerous small termite mounds, now deserted which give the place an other-worldly air.  Belowour camp with tents and some of the termite mounds. 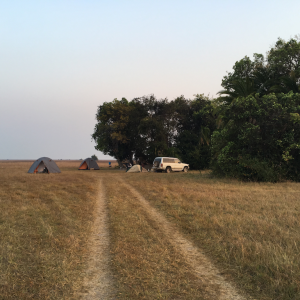 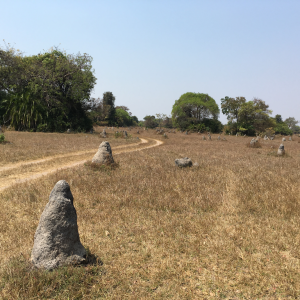 And here we experienced the most amazing experience for all of us for the last 3 weeks:  the close sighting of the Shoebill Bird.  Ornithologists from all over the world come to this park specifically to see this creature which is found only here in Zambia and a few other difficult to find scattered places throughout Africa.  There are only 5,000-8,000 of these birds in existence and this is a major breeding ground, in the wetlands.  Imagine seeing a very large winged bird with a gigantic beak that looks like it is a prehistoric creature and that stands between 4-5 feet tall!   We read afterwards it was most closely related to the Pelican family but we we all thought it could be related to the images we have seen of the now-extinct Dodo bird.  It was startling and awe-inspiring. 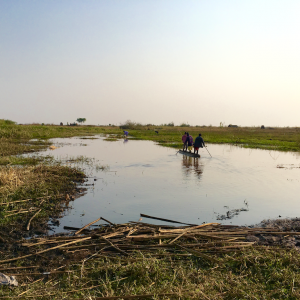 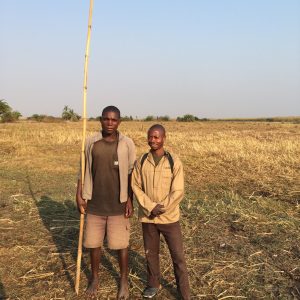 We had walked about 5 kilometers over marshy ground to the nesting area, taking a boat to cross over some of the more watery areas.  The boat went only a short distance through incredibly thick weeds and had to be almost hand pulled with poles for the local fisherman to get us through. 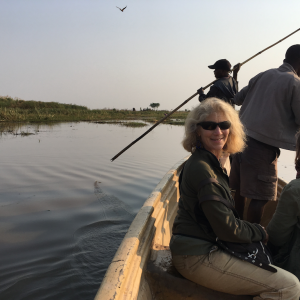 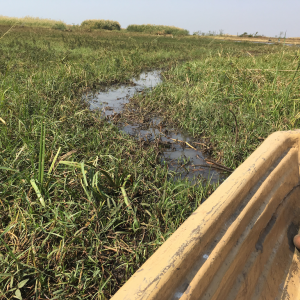 Two scouts went on ahead to try to locate a Shoebill which are not that easy to find but as we were waiting for the scouts to return at the edge of a marshy pond, down swooped an incredibly large bird right in front of us which landed on the other side of the water.  It just sat quietly for a long time so we could look carefully through our binoculars, hardly believing what we were seeing.  I could not get a photo of the bird but the slightly fuzzy grey in the middle of the image below is the head of the Shoebill as it walked behind the bushes. 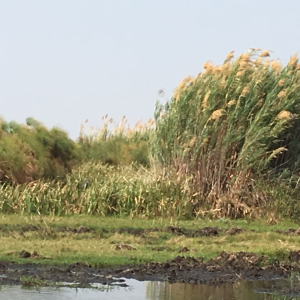 This land is largely tall reeds, tall grasses and wide stretches of wide open plains, cropped close by the great herds of Black Lechwe, a part of the antelope family and only found in this park and another reason why animal enthusiasts are willing to make the difficult journey to this part of the world.   The Lechwe are roaming and part as we ride our car near them.  It feels like the wild West. 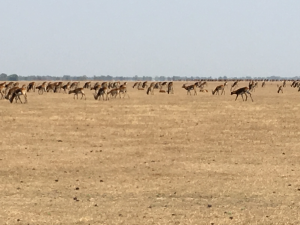 This has been a truly memorable experience and we return to Mpika, covered with red dust from head to foot outside and through all of our skin.  A hot shower seems remarkably luxurious and the world seems like it jumped a few centuries forward from our time in the Zambian wetlands.