There is a patchwork of rich greens and browns as we fly into Yangon, above the Irrawaddy Delta of Myanmar/Burma.  It is the end of the rainy season so the waters are high and below us there is ample evidence of the age of this agriculturally rich region as seen by the many brown turns and curls of the meandering rivers.   Snakes turning back on themselves of different sizes, with the great Irrawaddy gathering strength and then spreading itself out over the alluvial plain.  And the bright green of the rice fields interspersed with darker green blocks of the local villages, shaded by trees, with red and blue roofs and bright sparks of light glinting off some metal surfaces.   I think about how the farmers here have always grouped together and then go out, sometimes great distances, to work their fields during the daytime — perhaps for protection, or family support, or simply companionship.  But the great growing plains of the United States would, if seen similarly from above, at least before the advent of large agro-conglomerates, probably reflect more solitary farms and a different lifestyle than what has developed here. 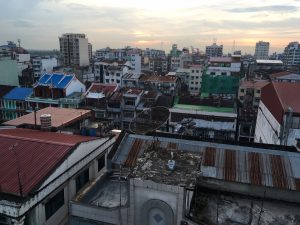 We are in mld-morning very heavy traffic driving in from the airport — bumper to bumper much of the way which is fine for Ginny and I in our sleep-deprived state as we look out and observe a city struggling to maintain itself while trying to move ahead, a difficult task.  Ginny has spent far longer in India than I have and we instinctively compare the decaying buildings black with mold and dirt, to those of Bombay/Mumbai and Calcutta/Kolkata, an effect heightened by the occasional remains of the old British style compounds and military barracks along the road.  There appears little effort to try to keep these buildings standing and given the deplorable conditions of the outside, I wonder what living conditions are like within these structures long past their expiration date.  To balance a bit, there are also great green parks with dozens of workers squatting to pull weeds and a few large lakes to break the urban sprawl. 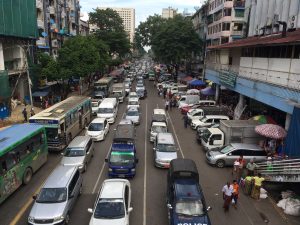 We arrive at our small unpretentious hotel in the heart of the downtown district called Chinatown and after some time to unwind and clean up, we decide to take a walk to stay awake.  The main street around the corner from our hotel is a busy shopping thoroughfare, Asian style.   It is difficult to walk along the sidewalk as there are hawkers with displays on the ground and on small tables in front of the actual street shops and a row of sellers on every possible inch of space along the roadside.  There is barely enough room for one person to pass so that walking single file we are continually turning and bumping into shoppers coming from the other direction.  This is pure chaos and although I love the markets of Asia, without any sleep the unusually high clangor, sights and smells are a sensory overload even for me. 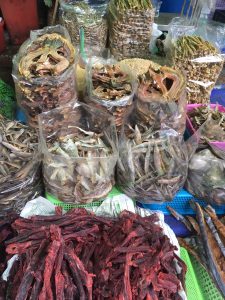 And there is no classification of what is being offered for sale — it is everything all mixed together whereas like products are more commonly grouped together on streets or areas in many other places in Asia I have visited.   Here there are gold jewelry stores next to electronics sellers and convenience stores besides cheap trendy clothing stores and an occasional small restaurant.  On the ground are piles of hardware (hammers wrenches and drills), mobile phone cases, fruit sellers (I can smell the durian before I see them), piles of clothing, canned foods, plastic flowers, rolls of contact paper (with very trendy designs), food sellers cooking with hot coals (it is a wonder that many people aren’t burnt each day from such close quarters – well, maybe they are). 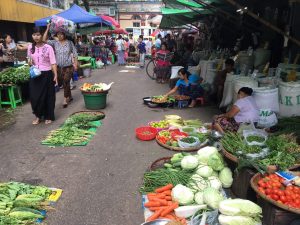 There is the smell of incense from some hidden temples, and the cry of hawkers which we were unsure they were calls to prayer or not.  There are obviously many Muslims in this area as we passed by many mosques and a good number of shopkeepers have the caps and beards which differentiate them from the majority Buddhist population.  We do pass many ochre robed monks and pink robed nuns along with most local women and men wearing their long wrapped cloths or traditional longyi below their blouses or shirts.  In other words, it is not like home. 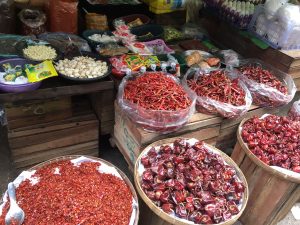 We take some side streets and are relieved to be out of the crowds.  We visit the only synagogue remaining in Myanmar, maintained by a single family— the good size Jewish population fled during WWII with the invasion of the Japanese.   It looks like the most well cared for building in the area.  There were some old photographs including a photo of the large Jewish English Language School in 1937. 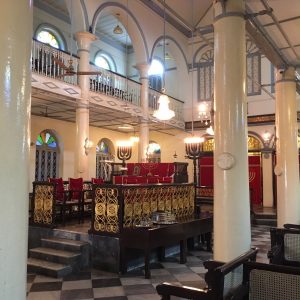 We passed the Kali Temple, which was closed — and  realized later when we tried to find an Indian restaurant that it is Diwali and a holiday.  On a much quieter side street was the local food market, with an array of vegetable sellers, with their wares on the ground, as well as the fish mongers, with their goods laid out mostly without ice in this rather warm weather today as well as butchered chickens and live chickens and piles of eggs and spices.  I am glad I am a vegan. 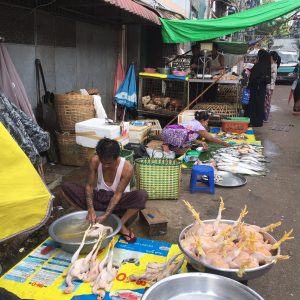 Crossing streets here is difficult.   There are stop lights but there are also continually turning cars who do not want to stop but expect you to watch out for them so it is a combination of feeling secure crossing one lane with halted cars and feeling very vulnerable as cars come in from all angles on the other side of the street.   There are some concrete walkovers, with badly cracked and dirty steps gong up and over to the other side of the street, used by very few people as most prefer the jaywalking style.  What is striking here is that the cars all have Right hand drive, like the British and all its former colonies, but the cars drive on the Right side of the road like in the United States.   At several streets, local people saw we were hesitating about what to do and basically motioned to us to come along with them.  Which we did.

Although I have been to Yangon twice before, each time it has a completely difference face. I look forward to tomorrow to see what delights it has to show me.   Jet lag is upon us.   We slept from about 7 pm until 1:30 am and are now enjoying the quiet time of the night.  I checked that our 3 friends have arrived safely and we look forward to seeing them in the morning.