Sometime reading tour books and doing on-line research provides a sense of what lies ahead in an experience in a strange land.   And sometimes it creates a false preconception.  I was a little confused reading about the Circle Train around Yangon because people had such significantly different experiences.  Now I know why.

Our group of 5, Ginny, Claudia, Jack, Susan and myself, on this day preceding the arrival of our other 2 friends and the official start of our tour, and our first day together after arrival, traveled on this Circle Train — generally described as a 3 hour trip by a public commuter train around the outskirts of the City.  Walking to the central train station was a journey in itself as crossing streets is so very risky.  The station we arrived at was the simplest of buildings, two tracks with many growing weeds around and between, and a walk across these tracks to sit and wait for the next train on a cracked concrete platform.  It was hard to believe this was in the middle of a capital city.  Ticket cost: $0.08 each to a half-way point.  This confused me a bit as I was told foreign tourists paid $1 for the trip. 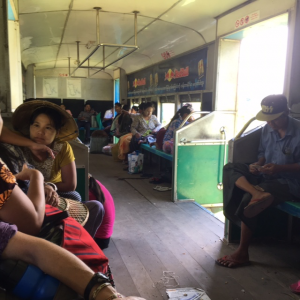 The train, pulled by a large diesel engine, arrived and we got on the last car, with molded plastic benches along the sides facing inwards and open doorways to allow for easy entrance and exit.  It was fairly empty and the train pulled out toward the East.  Slow, very slow, and then a stop in a crowded station where many local people boarded as well as many food hawkers;  baskets of hard boiled eggs, water, plastic bags filled with some kind of various colored liquids, a women on the train was cooking some kind of flat bread for sale — and we realized we had just arrived at the central station and had originally boarded in error at one of the lesser stops.  And was even more surprised when the train returned in the same direction we had come from and then continued on clockwise toward the West.  On the train: 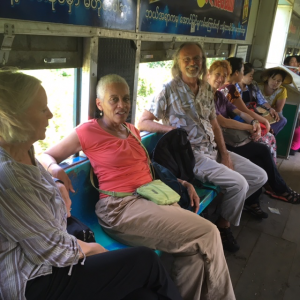 The train moved through the city but it was less a cityscape than that of a semi-rural suburb, with grass and trees along the way as we moved slowly along with a cool breeze through the entirely open windows, as we looked across and around at the beautiful people who got on and off — all local people wearing their traditional clothes, men and women, from a business man talking on his cell phone to a family with a few young boys about 1-2 years old with what can only be described as “mohawk” haircuts.   We passed some very large and active food markets outside some of the 30 or so stops and would have enjoyed descending  at some of them to walk through the piles of fruits and vegetables.  At one station, large numbers of food sellers boarded with huge bales of produce entirely filling part of the car.  Green leafy vegetables, red tomatoes, white bulbous foods, while the woman across from us began to start stripping, cutting and bundling her wild greens in preparation for, we assumed, sale in the Yangon market.  It was totally fascinating being there among the sights and sounds and smells of this part of Burmese life.

We got off the train for a quick pit stop (and the less said of that the better) and when we re- boarded the next train (for another $0.08 ticket each) we found ourselves in a different world.  This train had plush seats, facing forward and back, and moving fans and very few people.  This second half of our trip on the way back to Yangon was not nearly as interesting although more comfortable to look outside and watch the scenery go by — and now I realized why tourists who had written about the Circle Train had such very different experiences.  This was probably the $1 train which gave a less immersive experience of the country.  Jack on second train: 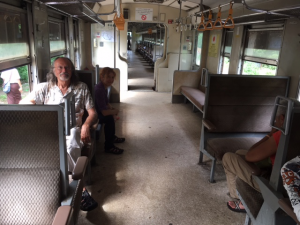 And this is true of much of tourist travel and a good thing for me to keep in mind.  The more travelers isolate themselves with luxury and ease, the greater the distance from the rich ambiance of working class life.  It is not necessarily any less interesting and informative but it is different.  Some train station views: 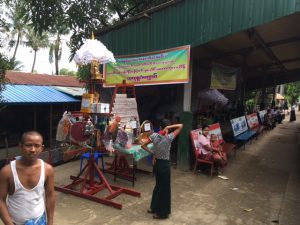 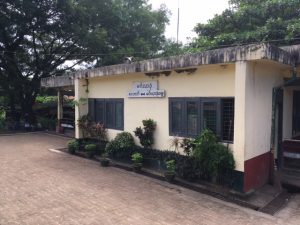 When we arrive back in Yangon central station we see our original train standing on the side of the tracks, having arrived a little ahead of our faster train.  We struggle with insane traffic to safely reach a restaurant for lunch and then visit the National Museum, filled with treasures. 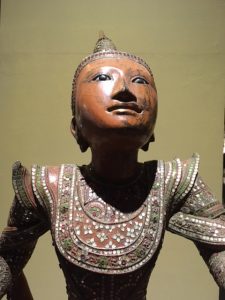 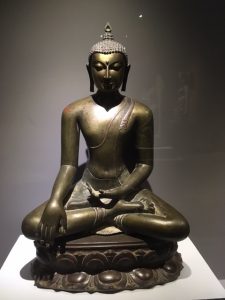 A taxi back home (all 5 of us together for a highly negotiated $3) and a final walk of the day to a nearby Chinese temple where traditional Buddhist images were surrounded and outlined by blinking spiraling garish colored lights making it appear a cross between a place of worship and an arcade sideshow.  Beautiful fruit market in front of the temple, jack fruit, pomelos, apples, tangerines, mangosteens and the king of fruit, durian.  I don’t dare bring durian back to the hotel due to smell but will try to eat some another day.  But I do bring back a kilo of mangosteens which I teach our group to eat (resulting in only a few purple stains) as we sit on the rooftop restaurant and watch the sky darken over the river and city below us.  There is a parade of some kind on the street level with a blaring bullhorn and very loud music and we see people pulling something on a white plinth.  The only explanation I get from the restaurant staff with little english skills is: China doll.  And with that conundrum we end our day.