Our tour truly begins today, although we have already been saturated with enough colors and smells to bring home more than a whiff of Myanmar.  Mary and Michael arrive as planned in the morning to begin our guided exploration of Yangon. Our young and soft-spoken guide, a woman named Mon, arrives and we begin our walk into the already humid urban environment outside our hotel.   We walk through the crowded street once again, brushing past the many hawkers with laden tables of assorted good of all kinds, and arrive at the heart of the city, Sule Pagoda.   Taking our shoes and socks off, we walk onto the cool marble platform around the golden stupa which projects upwards into a point with numerous bells at the top which must ring in a wind but are silent on this still day.

There are numerous side shrines, one for each day of the week for worship by those born on that day (I learn that my day, Friday, has the guinea pig as its animal — perhaps better than Thursday’s rat but not nearly as exciting as Sunday’s Dragon).  We see a miniature ornate boat on a cable which holds a packet of gold leaf which has been donated by a devotee and is about to be sent skyward to reach an alcove on the stupa dome above where a Buddha image and a monk await to receive it and be granted yet one more coat on the golden image. 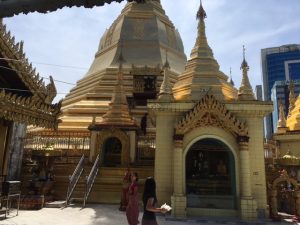 Our walk through the old colonial historic part of the city is bittersweet as we recognize how quickly this world is changing.  New, ugly modern structures, now stand among the grand old dames of the British Raj and we can sense that the pace of construction is quickening.  It is far cheaper to tear down these beautiful fading ladies then to rework them into serviceable form.  And it is a quandary as some buildings are obviously too far gone to save.  There is a magnificent building which was once the local courthouse which now stands deserted as deemed dangerous for occupancy and slated for demolition in the near future.  The beautiful derelict building below: 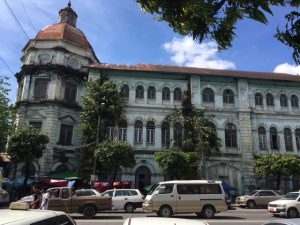 An architectural preservation foundation has been founded by the grandson of U Thant, former Secretary General of the United Nations.  But it is questionable how much be done in this society without sufficient resources for non-essential projects and whether anything can be done in time to preserve some of the character of this part of the world.  Meanwhile, we walk by sadly decaying structures and hope there will be something left here for the future. 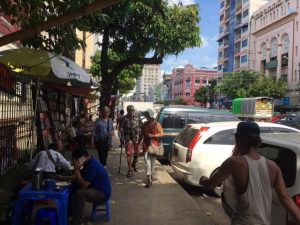 The Supreme Court, behind barbed wire, looks somewhat maintained, its red brick, porticos and towers still displaying some grandeur and eliciting respect for the institution.   Outside the court are stationery and book sellers, educational books and novels, in both Burmese and some in English. 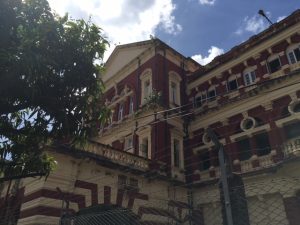 Across the street there is a public library and I see a school bus of children being led inside.  The sign outside says “Any book can be borrowed without fee”.  Good, books are still enjoyed here. 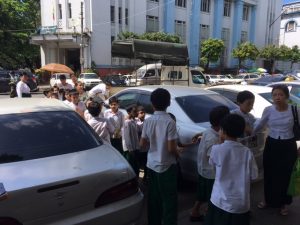 We lunch at a traditional tea shop, where small snacks are dropped on the low table and you pay for what you eat, fried vegetable rolls, fried chicken wings, pork and bean steamed buns, meat-filled triangle samosas, or some food can be ordered (Susan and I have the only vegan food on the menu, fried puris and potato curry and consume our years supply of fried oil in one sitting).  We are the only tourists in this place where there is no English spoken.  Good thing our guide is with us to bridge the communication gap. 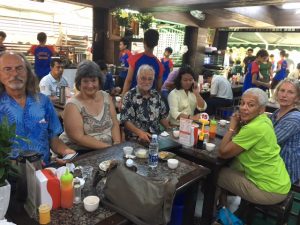 Most of us have a brief time to explore Bogyoke Market, formerly known as Scott’s market, a huge collection of small shops under one large roof, with gold and jewelry sellers occupying the important center positions and everything else occupying the rows and rows of stalls in this bustling place.  We have our own bus to transport us around this day — far larger than we need with an intrepid driver who must have nerves of steel to drive under these chaotic congested conditions and his helper who opens the door and provides a hand and a foot stool to ascend and descend.  But he doesn’t have to worry about getting in any high speed accidents, we crept along at about 5 m per hour along much of the road, frustratingly slow movement.

The river is part of the main character of Yangon and tonight we have a sunset cruise on a lovely private boat.  A few other tourists joined us but it was luxurious sitting on the top deck and watching the growing concrete city one one side and the green rural landscape of Dalah on the other, reached by many commuters by small skimming craft at a cost of $0.08 per ride.  As we head further out into the delta waters, we see ship after deserted and decaying ship and we are told the the construction of a bridge allowing cars and buses to travel to the region’s center in 6 hours eliminated the need for a far longer12-14 hour trip by water and thus all these vessels became obsolete overnight and have been left to rot in the water. 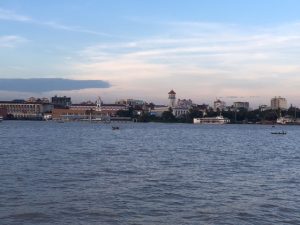 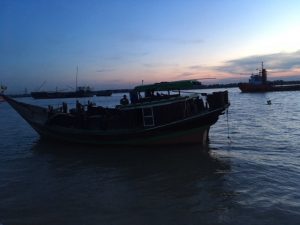 We pass by the great swathe of British warehouses along the riverside, once used for teak and now used for a more prosaic construction materials  as concrete, and for the large amount of frozen fish sent abroad from this part of the world.  Before the lifting of the U.S. embargo against Myanmar, goods had to be shipped through a third party country such as Singapore but the new regime will hopefully mean more trade and better prices for both incoming and outgoing commodities. 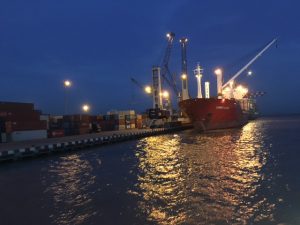 At dinner, with two of my lawyer friends from Yangon in attendance, members of our group kept on falling asleep over their food and all were grateful to get back to the hotel we temporarily call home.