Mandalay – the name with the ring of the exotic.  in reality, it does retain a sense of old Burmese culture but with an overlay of modern development.  The commercial center is a chaotic urban sprawl with 2-3 story shops, haphazardly built and often poorly placed in relation to sidewalks and roads, creating a sense of visual noise.  There is a large covered market which was gutted by fire a few years ago and there it sits, an eyesore and unusable with a “planned” restoration in the future – while meanwhile the stall sellers are in a temporary place under tarps.  The second tallest building, one of only 2 “skyscrapers” in town, is 23 stories of unoccupied apartments with broken glass and decay setting in as it was determined a little late that the local population does not want to live so far off the ground.   Our whole group below:

But when you get off a little distance from the center, the streets reflect a more peaceful time, with quiet tree-lined streets and small shops hidden among houses.  In such a setting, fulfilling our image of a quieter Mandalay, we visited the jade market with large numbers of jade sellers outside in covered stalls displaying their green, white and purple pieces of unfinished jade, ready for cutting into bracelets or other ornaments.  Inside the official market, men sit at numerous small tables with paper packets of cut and polished stones, all with flashlights at the ready to prove the translucency and purity of their wares.  We had to wade through hundreds of sellers but were told we were there early before the real commerce of the day begins when the buyers arrive to begin the haggling. 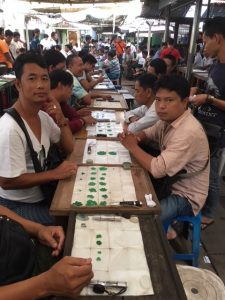 We have seen a plethora of monasteries and temples in the last few days.  We visit large ancient teakwood structures elevated from rain and animals on heavy thick teak posts, elaborately decorated with carved paneling and eaves displaying scenes from Buddha’s life, exquisite ceilings and serene interior shrines.   Beautiful white marble Buddhas stand in the center on watch in front of bare planked spaces where innumerable monks have sat and chanted and prayed over the centuries.  Outside are teak board terraces leading to the abbot’s chambers and storage while a little ways away on the ground are buildings for the monks and temporary novitiates. 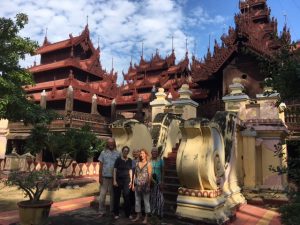 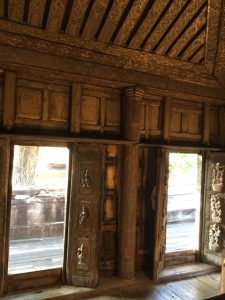 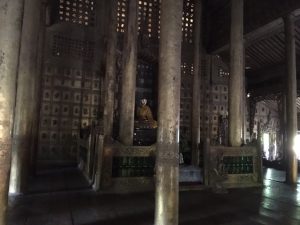 One of the oldest monasteries in Ava has an ancient sage watching over a younger monk who teaches the young children. 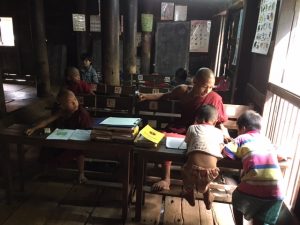 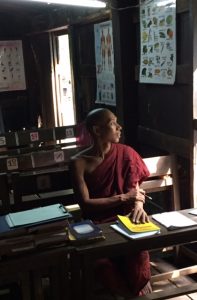 And then there are the newer and more elaborate temple structures where the people come to pray, with sparkling LED halos around the Buddha images.  We marvel at the amount of gold, the walls of jade, the intense devotion of the families who come to offer prayers and donate jewels and gold in hopes of gaining merit for future lives. 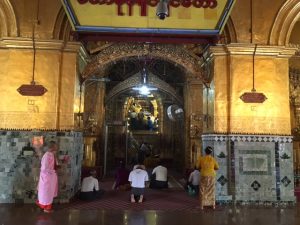 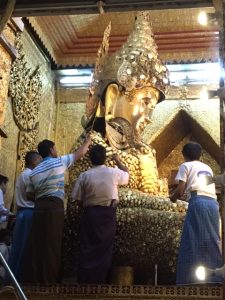 We were fortunate to visit the Mahamuni Paya, a well-known temple, at a time when a number of children arrive for an ordination ceremony, required of every Buddhist child here in this country, at least briefly at one time in their young lives.   After a dress-up parade at the temple, the child has his head shaved and goes to live in a monastery to learn the rules and experience the monastic life for a period from a few days, to a few weeks, to a few years, as determined by the parents.  I imagine that this practice supports later decisions and encourages some individuals to make a permanent choice of a quiet life of poverty and chastity.  There appear to be enough who join to keep the religion alive and healthy. 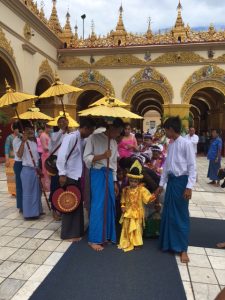 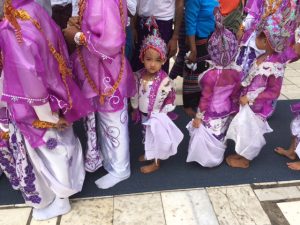 We visited a monastery with 1300 monks with daily donors scheduled to pay (about $3000) and prepare the food each day.  A vast project and a great honor.  These monks eat meat which astounds me. 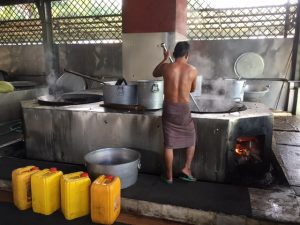 One evening we took the obligatory tourist visit to the top of Mandalay Hill, from where we experienced the great beauty of a sunset tinged with grey rainclouds.  Below us some of the government excesses are apparent — a huge gold course lit by high-intensity flood lights for the very wealthy, government house complexes for the military.  The two skyscrapers are a stain on the landscape but whom am I to say anything as the new buildings at the end of the Bay Bridge in San Francisco have destroyed an iconic profile. 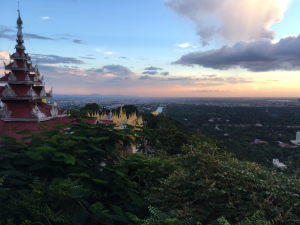 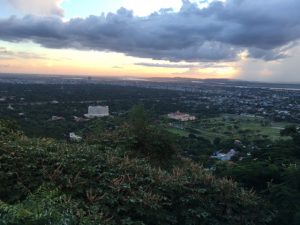 At all of these pagodas and monasteries we are required to take off our shoes and socks.  It is a chore, physically and psychologically uncomfortable, for some of us to walk through dirt, on a roadway, on teak planks, on smooth marble and sometime on mats still wet from recent rains. 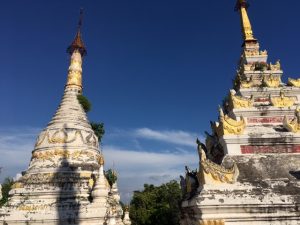 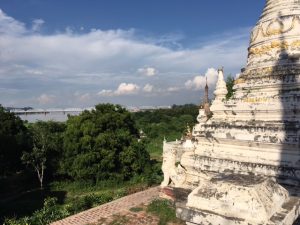 On our first night, a group of us decide to walk to a local restaurant I had read about on-line and which, on the map, looked like it was only 3 blocks away.  But the central railroad station, crowned by a newish hotel, was between where we were and our goal.   The walk through the station was a surreal visit to a seemingly desolate building, with scattered guards who seem uninterested in either helping or hindering us, as we walked up empty stairs attempting to figure out how to cross over many tracks with deserted train cars and platforms where groups and families were camping out.  We could not tell if these people were living there or just waiting for transport the next day or the next week.  We finally found a winding motorcycle ramp from the second floor which eventually led us down to a quiet street with fruit sellers and restaurants, including the one we wanted.

One  night took us to the famous U Bein Bridge near sunset, a favorite place for local visits and photos among both locals and tourists.  And our last evening found us at the feet of the famous Mustache Brothers, a comedy show based on satire of the former regime which landed the comedians in hard labor for 6 years.

The main noise factor in this city is motorcycles.  It is a now understandable why they are banned from central Yangon.  Helmets are required by law and it seems as if most people do not use them but, we understand, at least carry them for fear of a fine.  We encountered the sad reality about the dangers of motorcycles here during our visit to Ava, the old capital.  After a drive down to the riverside, we crossed by small motorized boat, and, after a lovely lunch, began a journey by horse cart over dirt roads and past small villages in a lush green environment to visit an almost 200 year old monastery, a large white rock and stucco pagoda and a watch tower significantly askew from an earthquake in 1838.  On our way we passed an accident and learned later that a 16-year old on a motorcycle ran into a horse cart and was killed.  We are both shocked and saddened by hearing this news. 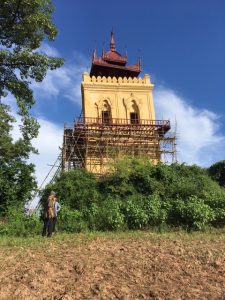 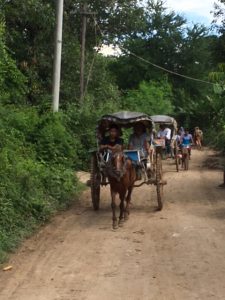 I will end this post with some remarks from the group about some memorable moments in Mandalay:

The children being taught to read in the ancient monastery brought the building and practice to life.

Seeing the caged birds who were caught so that they could be sold and “released” later to grant the buyers “good merit” was strong and painful.

The intensity of the jade market with people involved in their everyday work.

Watching the gorgeously clad and well-behaved children with their families at the novitiate ceremony at the temple.

The fact that people we would meet would would smile at me with great genuineness.

Having people ask to have their photos taken with me for the first time in my life.

The grey monsoon clouds over the countryside and sunset from Mandalay Hill.