We are now leaving Mandalay and crossing over a new 2008 bridge across which is splayed a scene of green rolling hills, each one crowned by a white stupa with a golden spire shining in the sunshine.  We see a group of barges along the river ready to load huge numbers of cut government-owned teak logs which lay stacked up on the shore.  We go under a large red and gold concrete arch over the roadway saying “Welcome to the Sagaing Region”.  We pass through a main street for potters displaying unglazed pots and bowls as well as green and blue baked ceramic vessels outside the shops.  The next few stretches of road offer for sale large brass or silver decorative vessels, white and gold, with ornate designs.  It is always interesting here. 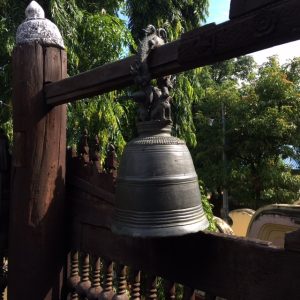 A line of pink-robbed shaven-head nuns carrying brown parasols with begging bowls just crossed the road in front of us.  I understand the monks and nuns must eat their 2 meals a day before noon.  This area has a very large number of monasteries and nunneries as, we are told, a large population of people fled to here from Mandalay during the Japanese occupation and when they finally returned home, left the land to the clergy in thanksgiving for their survival during that difficult time.  There are many stupas here built by donations from faithful families and they sprinkle the landscape in beautiful profusion. 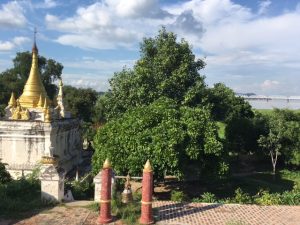 Out further in the country we see white Brahma bullocks being used for farmwork.  As we go though a small town the main street is lined with fruits and food products piled high in pyramids on low wooden tables by the side of the road.  Yellow and green bananas, large pomelos, bright green watermelon, light green guavas, and oranges are some of the fruits that fill each stall.  We finally find out the black lumps the look like coal are actually water chestnuts.  We have also seen baskets of fried brown crickets, a popular snack, in the markets.

The roads are kept clean but In the countryside here, like every rural place in Asia, are high piles of plastic garbage.  The sign of an “advanced” economy.

I am aware that commercialism is truly alive and well here as we pass around a traffic circle with a former king’s statue in the middle.  Surrounding the circle are large colored billboards advertising jewelry and clothes and cell phones.  Neon street signs are not as prominent here as elsewhere – it may be expensive which is why it is dominant only in the temples –  but advertising is, as everywhere, king.

We are in the deep countryside now, fields of rice, shower trees, koi trees, high grass and suddenly, in the distance, a giant standing Buddha can be seen in a mudra of protection.  We continue on and now there are hundreds, no, thousands, of small buddha statues on the ground all looking toward the giant standing Buddha, as well as a nearby reclining Buddha.  A little ways away we can see a sitting Buddha still under construction, headless, with a giant steel crane on its neck ready to pull up the concrete and materials to complete the project.  the lines of small rectangles in the gown of the standing Buddh below are actually windows along the staircase. 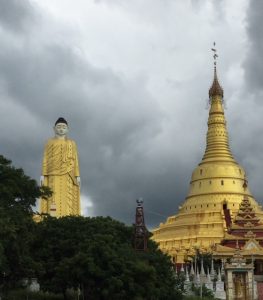 This complex, the Maha Buddha Tataung, we learn, is a major pilgrimage site where the plan was to plant below the giant statues 1000 small concrete Buddhas sitting between 1000 Bodhi trees, each one paid for by a named donor.  But the demand was so great that now there are 9000 Buddhas — and more extensions are planned.  The Bodhi trees are now about 12 years old and still small saplings.  But in a 100 years, a blink of an eye in the Buddhist cosmology, these trees if able to survive will be great sprawling giants hiding the little Buddhas and forming a vast canopy over the land.  Although I am not sure about the karmic value of the donations, the ecological reforestation efforts are to be applauded.

This is indeed a land of surprises and contrasts.  We enter the Sambodde complex, expanded from a simple temple by donations from the founder of the reknown Tiger Balm salve, in thanks for the formula which was given to him in about 1938 by a Burmese monk who lived in a small temple in this area.  Now enormous, elaborate, and brightly colored like the most fanciful confectionery, this group of buildings includes not only the large main temple but an auxiliary hospital and pavilions for monks and visitors. 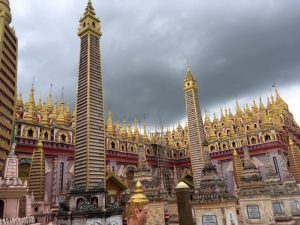 The marble floored interior has corridors leading to large golden robed Buddha statues and in the center an impressive Buddha granting protection from calamity. The story is that a Japanese bomb landed near the original site but it did not explode — leading to the (rather unproven) assumption that it was Buddha’s grace that saved the temple. 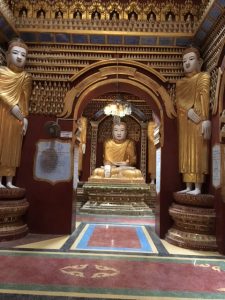 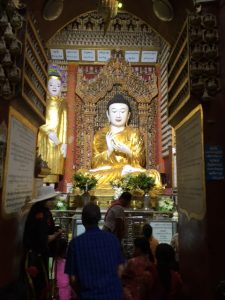 Inside the new structure are thousands of small terra-cotta Buddha images set in the walls from floor to ceiling.  We were told the Tiger Balm family who now live in Singapore makes an annual pilgrimage here and provides significant funds for maintenance and upkeep.  Although foreigners are also charged about $3 each for entrance.  Below are the little Buddhas imbedded in the towering walls. 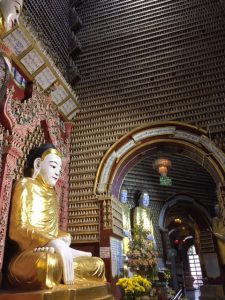 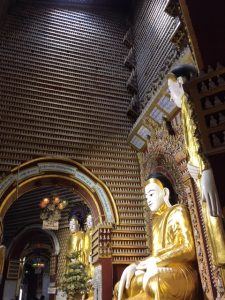 The city of Monywa is quiet and the streets filled with motorcycles and few cars.  Some of us make a late afternoon visit to the street side market in the center of town where we see carts with local food, seafood and meat kabobs, fried mounds of rice cake, meat and vegetable stews in a fiery-looking red sauce, noodles and toppings, and sweet jaggery-flavored desserts. 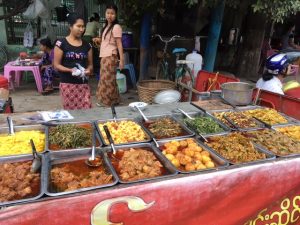 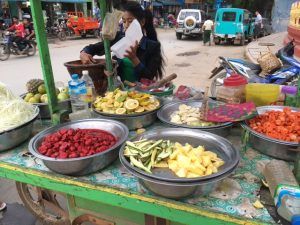 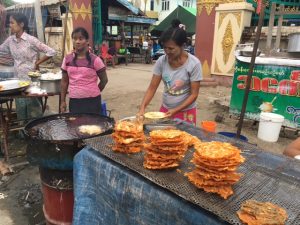 The street is littered with the remains of a large festival that was here last week centered around the city temple.  This temple seems on a more human scale and peaceful in its demeanor, although the cages of different kinds of birds outside the entrance – caught in order to be bought and released – was disturbing.  The Buddha Hall itself, and the meditation hall, had large white images finely dressed in gold robes and when we asked, we were told the image body, and the perfectly smooth glossy surface, is made of fiberglass.  Makes sense. 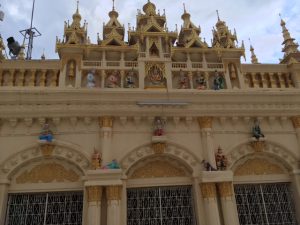 Our visit to the view over the river at sunset also had a disturbing aspect as we were told the 2 mountains in the distance used to be 5 mountains, but 3 of them have been obliterated by Chinese mining for copper, by an agreement with the old Myanmar regime.  The remaining mounds will be gone in the future as well, irretrievably changing the landscape.

What is most striking in my experience of this day is the widespread presence of golden spired stupas everywhere throughout the countryside.  For a poor country, with families living on subsistence farming, this is an amazing feat of devotion – to use one’s wealth in the belief it will help not only oneself but others in the future.  But wait – I realize that Europe certainly developed churches in every little town and grandiose cathedrals in bigger cities and where would that funding have come from — the rich and powerful who collected taxes and tithes from parishioners.  And here it was probably also the rich and powerful who choose to create buildings in their name and for their own benefit.   Times and places changes but the strength of the human ego remains constant.

Below are some signs we thought were interesting — the first outside a monastery, the next two  found in rest rooms and in our hotel rooms — lessons in toilet etiquette. 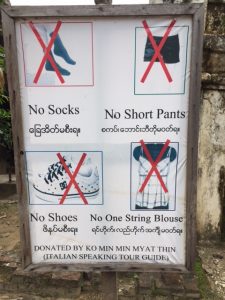 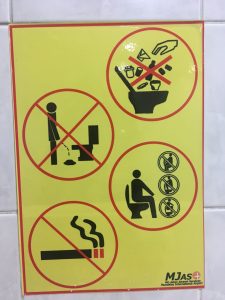 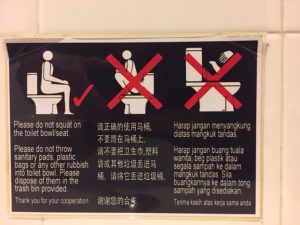 It is Sunday here now — we, like all of the U.S. — are anxious about the election and will arrange to be together with internet connection at 10:30 am on Wednesday which will be 8:00 PM California time on Tuesday.  We have political discussions together which upset all of us so we are glad we are away from the final days of the great American circus.