What makes traveling in Asia so enjoyable is the surprise encounters that illuminate a different culture and way of daily life.  It makes you think:  What would my lifestyle look like from a different perspective?  Am I restricted by my culture to a certain way of thinking? 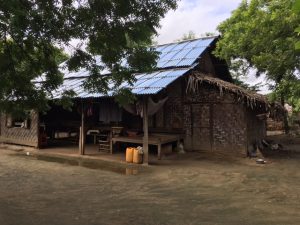 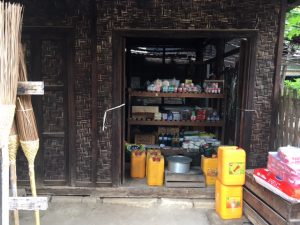 Today in Pakkoku and later in Bagan we found ourselves in several unexpected situations to cause us to stretch our boundaries.   A stop at the village of Ma Oo Ahle in a rural area on the way to Pakkoku allowed us to take a walk into a way of life that has not changed for centuries.  The unpaved main street with a few vegetable sellers, a simple grocery store, the betel leaf stand, bins of grains along the road, a few clothing shops and, because it was Sunday, many children. 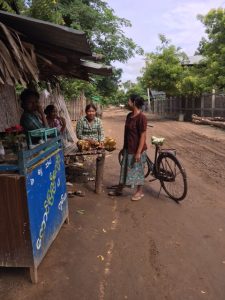 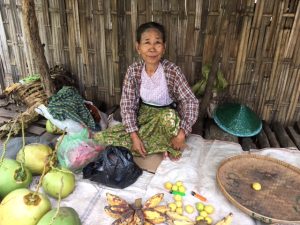 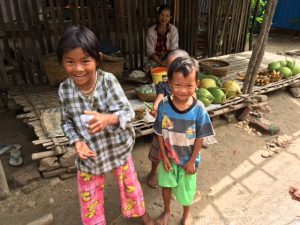 These children insisted on holding some of our hands which we assumed was sweet until they asked us to buy them shoes — in a place few people and few children wore shoes — and then watched leave for better fun when their request was denied.  They all seem well-fed and healthy, fortunate to live in a country which seems to have enough food. 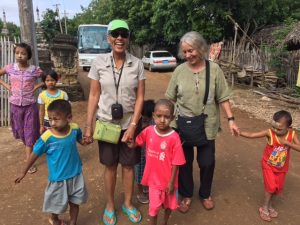 We walked through small dirt paths, past the local garbage dump of plastic refuse, to a good-sized lake where an old teak post bridge connected this village to the next one over the water.  There was a pagoda nearby and no other people around.  We watched some young boys climbing around a large banyon tree and then chasing each other in front of us.  They seemed very happy and to have a carefree lifestyle although dressed in rags. 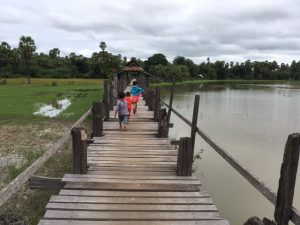 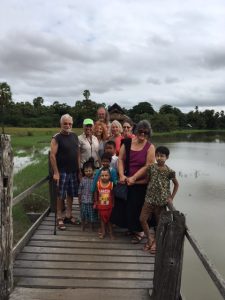 Upon approaching the marketplace of Pakkoku, we see a long line of boys in their school uniforms, each holding a traditional bowl used to present food to monks, followed by a line of school girls in uniform each holding an identical box and succeeded by older girls holding boxes of crackers.  Our guide tells us that in preparation for the new robe festival next week, these children are presenting gifts to the local monks in an annual ritual.  This is both a show of devotion by their parents and a teaching of tradition to the next generation.  I assume the families furnish the funds to buy these gifts and wonder about those who can not afford to participate in this activity. 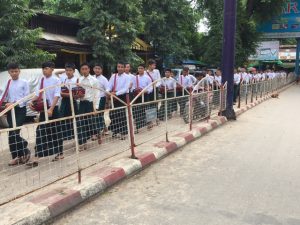 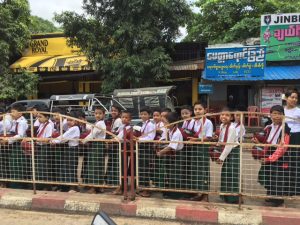 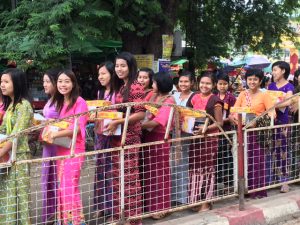 Then we enter the marketplace, one of the most difficult scenes to communicate to those who have not experienced it.  And photos never express even a part of all of the myriad impressions from even a brief visit to one of these covered markets in SouthEast Asia:  very small paths to walk between stacks of various kinds of goods:  fruits, vegetables, different kinds of rice,  barrels of grains, beans, bowls of spices, stands with cosmetics and toiletries, piles of clothes, shoe stores, school supplies, shopping baskets, and then the meats and fish, often buzzing with flies, the list goes on and on and with it the various smells, almost always good, and the cacophony of buyers and sellers and porters trying to make their way through the pathways with huge weights upon their shoulders. 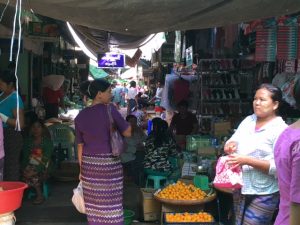 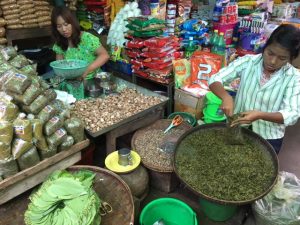 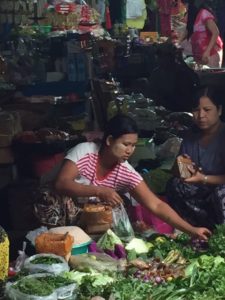 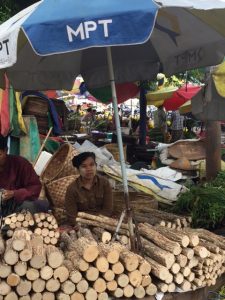 We emerge for a breathe of air and climb back into our little bus for our ride to Bagan and the archeological wonders of its plain of stupas.  We visit one large pagoda with its gold dome covered with a fine bamboo latticework of scaffolding to repair the damage from the recent 6.8 earthquake last August which impacted over 200 of these ancient monument.   When we climbed another brick site nearby for a view of the countryside from above, we could see the colored tarps, blue, green, orange, covering some of the places in need of repair as well as more scaffolding around the steeples of other standing buildings. 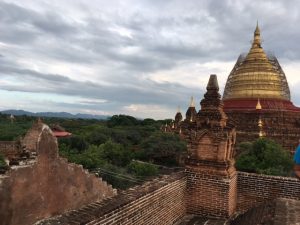 It is a magnificent sight — the red brick stupas, big and very small, over 2000 of them, scattered amidst bright green foliage everywhere you look.

Our last big adventure for the day happened after dinner at an open-air covered restaurant (as most of them are).  It was about a 20 minute walk in the dark on a small tree lined road from our lovely hotel with little traffic and an occasional house and restaurant in New Bagan, an adjunct to Old Bagan more recently built to avoid further commercial development within the archeological zone.  Ginny and Susan walked ahead as Jack, Claudia and I left the restaurant a few minutes later when, half-way back, it started to rain.   We ducked into the portico of an old hotel, already wet, when the rain really began.  Those who have  experienced monsoon rains know what this means — a solid sheet of intense rain, no space between raindrops, a roaring sound as the rain hits everything in the vicinity, especially the tin roofs.  Within no time it was a sea of water around us as we sat protected overhead on a bench.  After about half an hour, I knew there was no way we could get back even when the rain stopped without walking through deep muddy puddles and I had on my good walking shoes.  The hotel clerk of this rather disheveled hotel spoke no English — he was a young man whose mouth was totally ruined and his teeth gone from betel leaf chewing.  I tried to communicate to him we wanted a taxi and eventually, after about 30 minutes, when he figured out we would pay, he produced a friend of his with a truck in the hotel compound who agreed to drive us back to our hotel for the sum of $5 — worth every penny.  So we arrived, a little wet, and found there Susan and Ginny who had walked back under that storm of water, completely soaked through but safe and sound.  And the rain continued to come down for quite a while.