After the torrential rain of the previous night, the roads were quite muddy as we went shopping with Su, our cooking teacher, to the covered market in Nyaung Ou to buy vegetables for our lunch.  Once over the puddles, we found ourselves in yet another crowded exhilarating market where we bought  eggplant, watercress, tofu (which in the Burmese version is yellow and not made from soy beans but from chickpea flower), bean curd (which is our white soy bean variety but hard and not very edible without being cooked), pumpkin, “thai” basil, and numerous other ingredients. 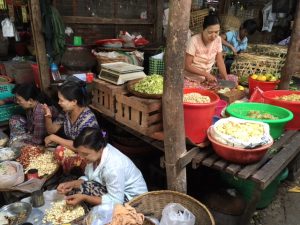 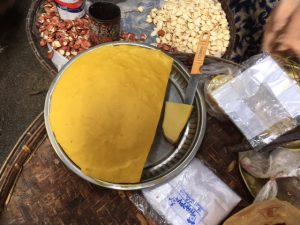 Back in Su’s home, in her small but adequate kitchen, using mainly electric woks, we cooked a Burmese banquet.  Here is Michael cooking: 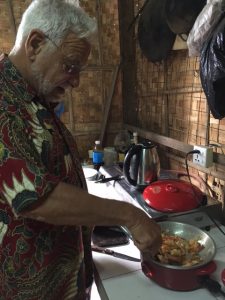 Ginger and cabbage salad with peanuts (spectacular but I was surprised some of my group was willing to eat raw uncooked vegetables), melon soup, watercress and tofu, eggplant with onion and turmeric, stewed pumpkin, and, for the meat eaters, shrimp with basil and chicken curry — with fabulous jaggery desserts.   It was a modified Burmese meal, to be sure, as some of the vegetable dishes left out an important ingredient for the vegans – fish paste and fish sauce. 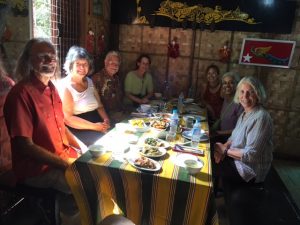 By this time the rain clouds were thick and a group of us went for a walk around our hotel, through high grass and past ancient brick monuments, before the rain began once again. A herd of cows munched the lush vegetation a few feet from our path as we made our way back to our comfortable rooms and a dinner in the hotel’s outdoor pavilion.  The wine drinkers in our midst don’t think much of Myanmar wine although they love the beer — but from my perspective, the fruit juice drinks have been fabulous — fresh papaya, pineapple, watermelon, and mango. 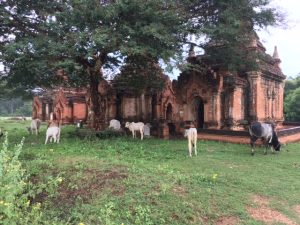 Never one to sit back and let things pass by, Ginny and I rose early this morning to see the sunrise from the top of one of the famous pagodas.  This entailed arriving in the near dark, removing our shoes, and climbing up 5 very steep almost vertical sets of stairs, with each step about 2 feet high and not even wide enough for a whole foot to rest.  Luckily there were sturdy steel bannister by which both of us literally pulled ourselves up.  Ginny remarked it was like climbing up a five story ladder.  Most of the other people around us were about 25 years old so the fact that we made it to the top was a feat in itself. 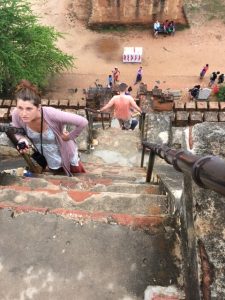 Although party cloudy, there was still a beautiful intense pink glow and orange brilliance as the sun rose over the green plains and stupas spread out below.  The roosters were crowing and bird song was in the air sweet from the recent rains.  Although there were many people nearby, all were hushed in the early morning silence so there was a sense of contemplation and wonder of the beauty before us. 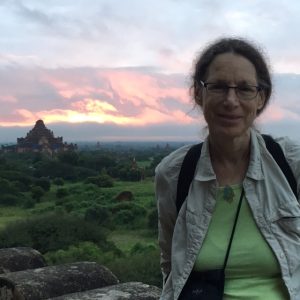 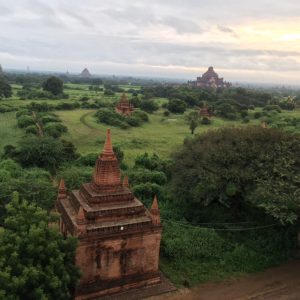 With sore and wobbly legs, I joined the rest of the group after breakfast for a bicycle ride into and around the countryside.  We were offered standard 3-speed bikes or — ebikes.  The ebikes I had previously heard of were bicycles with an auxiliary motor to occasionally help going up inclines.   This was basically a mechanized scooter with throttle and handbrakes run by an electric, and thus totally quiet, motor.  In other words, a motorcycle.  Four of us chose the bicycles and only Mary took to the scooter so off we went, on rough roads with very uneven paved surfaces dropping off on the edges into muddy ruts and dirt and many potholes with pools of water.   When i was last here about 10 years ago, the main form of transportation was horse and cart with the occasional tourist vehicle to be seen.  Now, everyone is on motorcycles and ebikes with numbers of cars.  I can’t say it is crowded or that there is even much traffic but it makes bicycle riding a little risky with cars and motorcycles passing in both directions on narrow roads.  After I see the situation, I insist on helmets for whomever wants, which includes me. 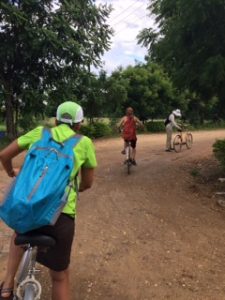 Although the route is mainly flat, there is still uphill and downhill and it is getting hotter and very humid.  It is, however, still very pleasant to ride along a country road, with beautiful 12th century pagodas cropping up in the middle of fields along the way.  We visit a village that received electricity only last year for the first time, walking through its ancient dirt walkways and watching antique farming practices. 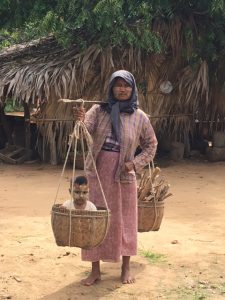 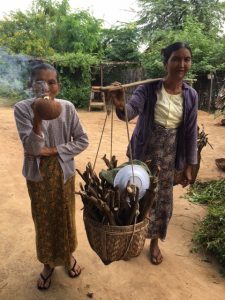 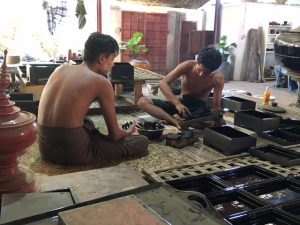 But by the time we pedal on to visit a well-known temple and start riding back, I am tired.  When we actually make it back to the hotel, my legs are completely exhausted.  At the temple, on our way home: 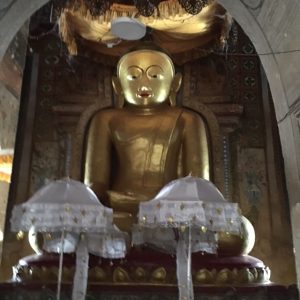 And the day was not yet finished.  Finally, a really good meal — we learned of a vegetarian restaurant in Old Bagan which was excellent — a visit to a lacquerware factory (a specialty of the area) and a stop at a popular temple with 3 very large and unattractive Buddhas, 2 sitting and 1 reclining.  I know I am being disrespectful but, really, three huge Buddhas in a crowded space with not much aesthetic beauty about any of them.   Modern slick ceramic tile surrounding the courtyard in a pattern suitable for a 1950’s home in Florida, a 11th century building painted bright white and with pigeons and pigeon poop in the lap of Gautama himself. 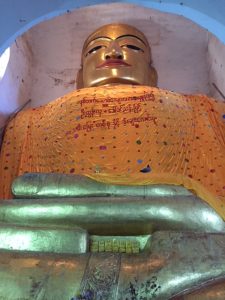 We decide to help our sore leg muscles by going for a food/leg massage at a fairly new hotel a short cab ride away — Ginny,, Claudia, Susan and I lying on mattresses and having masseuses work on our tired-out muscles — followed by dinner outside around a large pool with Burmese music and dance in the background.  As we walk out afterwards, I remark and everyone agrees how exceptionally privileged we are to have this opportunity to visit this country at this time and in such luxury compared to the lives of most people around us. 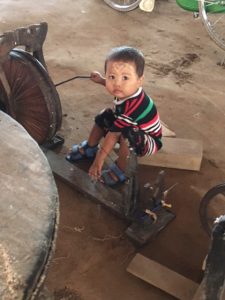