I feel a strong pull toward understanding the history of the British Raj in South and Southeast Asia.  If one believes in reincarnation, you could hypothesize that I was the wife of a British official in an earlier life in some far off place in India or Burma.  So, knowing I was going with a group to Myanmar, I decided that at the end of the official tour I would travel to Mawlamyine, known to the British as Moulmein and capital of South Burma during the 19th century.  It is mentioned in Rudyard Kipling’ famous poem “Mandalay” and I wanted to see what remained of the relics of this past and invited my tour group to extend their stay and go with me.

From Hpa-An and its strangely shaped mountains, we take a boat down to Mawlamyine.   At the jetty, we have to cross over onto a very nice boat wth teakwood furniture and then get helped onto our boat, a rather plain, tired out wooden boat with peeling paint, side benches and a wooden covering.  We were told there was a toilet on board but when I finally asked to use it, and followed my guide to crawl on hands and knees on splintery wobbly planks on the side of the exposed running motor, was informed it was “too dangerous” for me — which it probably was as the toilet comprised a hole in the back of the boat surrounded waist high by plastic tarps requiring very steady sea legs while squatting.  I waited until we landed. 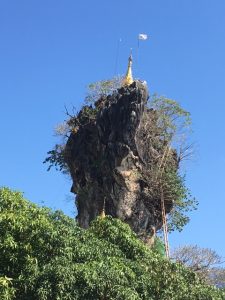 The scenery was beautiful along the way, the mountains rising in the distance all around and then moving into flatter marshland with occasional riverside villages.  It is a quiet town now, since the 1920’s when the teak and rubber export business moved to Yangon — with some re- known as the home of George Orwell, who served as head of police, about the time of the end of Moulmein’s high days.   There are few cars, a number of motorbikes, and a friendly attitude of the people, like everywhere in Myanmar.  On one of my walks, a very old, very thin monk was walking toward me and I tried to walk around him but he purposefully stopped so he could wish me “Minglabar” and be acknowledged in return.  No one asks for handouts or money here.  The children are genuinely happy to see us and even the young guys on motorbikes with dyed hair and designer-names on their T-shirts are respectful. 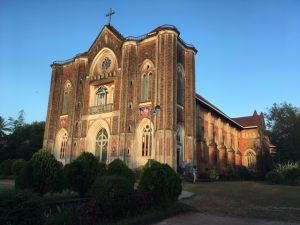 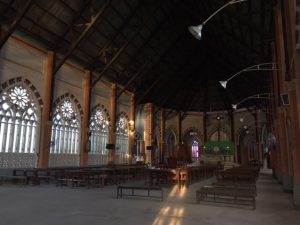 Earlier in the day we visited a Buddhist cave site, where monks have meditated and lay people have contributed images for worship over centuries.  Part outside, part inside, you can imagine how inviting the cool interior would have been in this climate and how special to include part of the landscape into daily devotion. 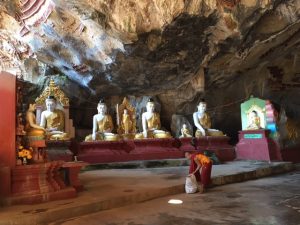 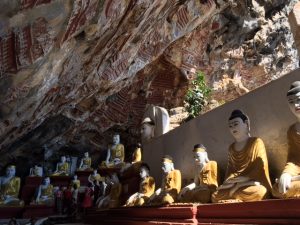 We visit one of the many temples that ring the top of the surrounding hills at sunset and watch smoke rise from the wood fires still used for cooking.  Here, once again, most of the Buddha images have neon multi-colored halos and Ginny remarks that in a few years there will be no Buddha image found in Myanmar without this kind of garish aura.

The next morning we are off for the day to Bilu Island.  There is a bridge under construction to be completed in a few years but for now a boat is the only means of transportation over and back.  This time we climb onto a boat that is so decrepit it looks like it can hardly stay afloat and we are glad, although the walk over on a gangplank is not that easy, that our boat is in a little better shape. 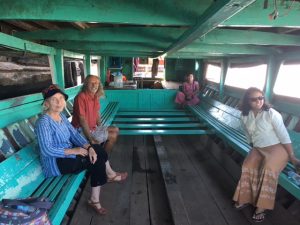 Once again, side benches and a wooden covering over part of the boat for the 45 minute ride with a loud engine roaring in our ears.  The island itself is a microcosm of South Myanmar with small cottage industries.  We visit ones producing wood products, bamboo hats, and rubber bands.  There was also a factory sorting and bagging rice. 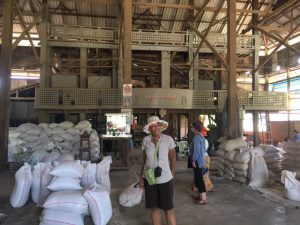 Have you ever thought how rubber bands are made?  Here it is:  from white rubber, to dyed cylinders, workers cutting the cylinders into bands, boiling them, then sorting them for delivery. I will never look at rubber bands the same way again. 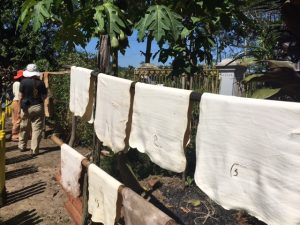 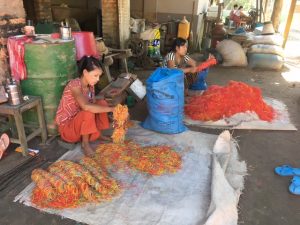 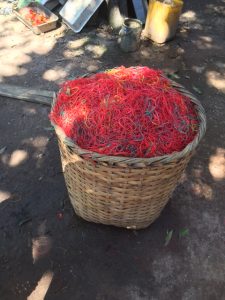 And for small schoolchildren, there are slate tablets, hand cut from blocks of slate and encased in a wooden frame like you have seen in images from “The Little House on the Prairie” or similar America history periods.  The guide points out that the marks from the slate pencils used on these boards erases so children can practice their writing without wasting paper.  Ecological and it works although a child dropping a slate board or slate pencil will soon be without. 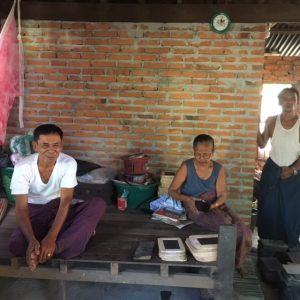 There are rice fields and fishing as well.  But we are told at the home of a local Mon woman, who prepared a feast for us for lunch at her immaculately clean house, that most of the young men go across the nearby border into Thailand to work.  This women’s sons send home money but they are paid less than the local Thais because, like is the way of the world, they are illegal workers and must accept what is offered without recourse.  She has 9 children, now between the ages of 21-45, all born at home. She adds that currently most women go to the local clinic to deliver their babies with a midwife in attendance. 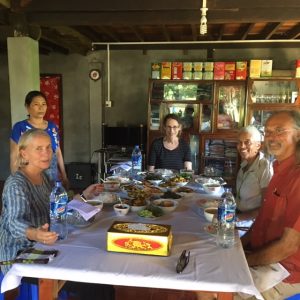 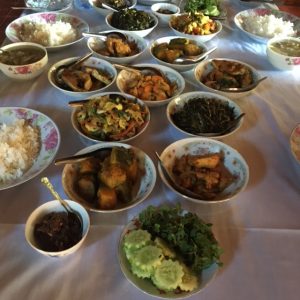 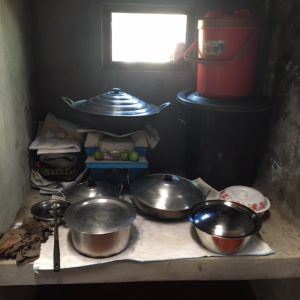 While waiting for our boat we look at the large number of motorcycles parked by the jetty belonging to people going to work or shop in town — and about 99% of them are Hondas of various models and years.  We saw one Yamaha.  A majority of the cars seem to be Toyotas. 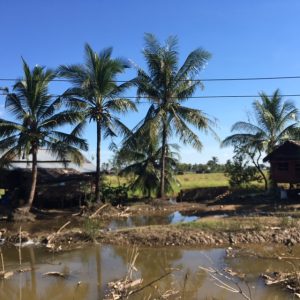 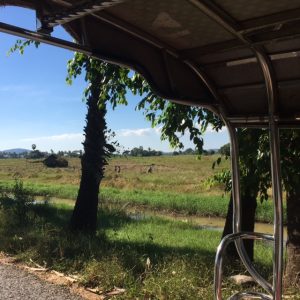 We visit the market at the end of our day to buy baskets to carry our treasures home and this one has its own identity as does each one I have ever encountered.  Here there are 2 covered stories of fairly wide aisles filled with cooking ware in one section, cloth goods in another, toys and shoes separated a bit and all without crowding or aggressive sales techniques found in other places.  Our guide had to keep on asking directions until we found one stall with the woven baskets which are ubiquitous for shopping and hauling goods around these parts.

Back in town, I leave the others at the hotel and head out for what turns out to be 1.5 hour walk in the late afternoon. I was looking for the old British buildings which we have not yet really encountered because they are in a more Southernly part of town.  They are around the area where old churches can be found, the first permanent buildings to be constructed anywhere in the Raj period to allow people to feel a little bit more at home.  There is an old Catholic Church, a First Baptist Church, and a Methodist Church, among others.  I am surprised most of them are open so anyone can walk in.  There is an imposing City Hall with armed guards, a legacy from when this was a major commercial site. My maps pointed out the Post Office but with all signage in Burmese it is hard to tell whether the very old derelict building could possibly still be operating.  Some of the old houses can be seen behind walls but with open gates, now very faded beauties with their gingerbread trim and wooden shutters.  The high school looks like it was once an English private school.  The hospital in the area does, thankfully, look like it has been renovated.  If you look around and send your mind back through time, you can imagine a period where horse carriages carried people up and down this main street to church and to market, where the mem sahibs, many of whom were born and raised in this climate, spent their days with limited choices of recreation or companionship, sweltering and worrying about their children, and their susceptibility to some of the many diseases of the times that swept young ones to early graves.  I didn’t see the Gymkhana or “Europeans Only” club which must have been around here as a meeting and drinking place through periods of great boredom and later to discuss the approaching war with the Japanese. 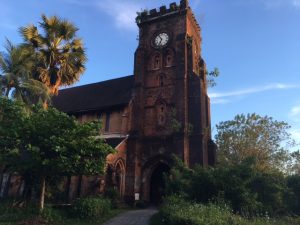 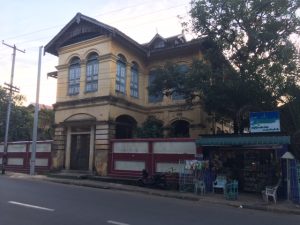 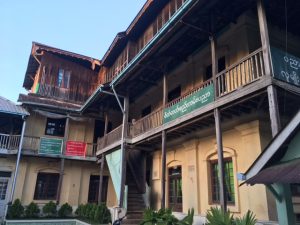 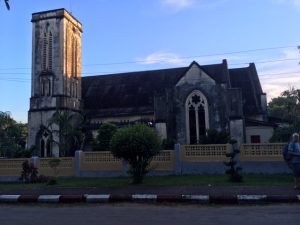 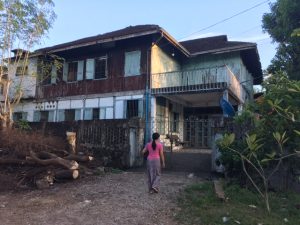 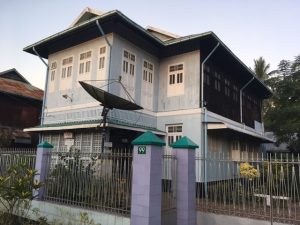 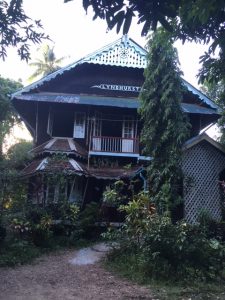 I walk back through the twilight, with a toy seller with illuminated birds walking in front of me, careful to step over the many deep holes in the sidewalk and crumbled gratings over the sewer system.  I look around and think how different daily life is here but that in the end it is all the same: family, friends, food and health — available in different proportions perhaps here than in California.  Although I will not miss the crowded streets of Yangon upon my return, I hope I can remember to reach into myself to pull out the gentle graciousness I have found here to replace the cynicism and self-serving behavior so much a part of my culture.