Battambang is a former French colonial district capital  in Cambodia and I have long wanted to visit it to explore its architectural heritage.   My friend Melanie and I decided to spend two days exploring this once prosperous town.

Cambodia is changing so fast visually that the past and present are clashing in often unpleasant ways.  Without urban planning, garish high rises now occupy and disrupt the flow of what used to be the royal center of Phnom Penh and the once-sleepy town of Siem Reap is now a jungle of concrete hotels, tourist shops and restaurants.   A good piece of the problem is the nightmare history of the Khmer Rouge and the wholesale slaughter of anyone with eduction during the purges of the 1970’s.  From the enormous numbers of private schools and colleges in major cities (with names like U.S.A. High School and American English School), education does now seem to be a priority for those who can afford its costs.   And learning English is seen as the route to upward mobility.  But it will still take a while for Cambodia to catch up to its neighbor Vietnam. 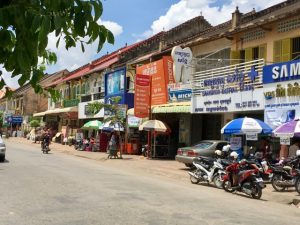 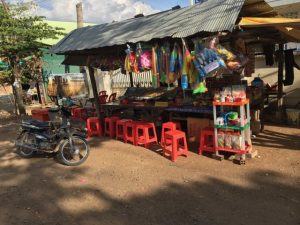 Vietnam has had the foresight, or perhaps we can better call it historical imperative, to constrict the encroachment of Chinese financial interests.  But Cambodia has not had the impetus to turn away hard money for factories (so that Chinese industry can subcontract its garment orders), rice mills  (which diverts rice production over the border) or natural resources (water and electricity provided to China and Vietnam), providing very low wage jobs and unrestricted urban growth. 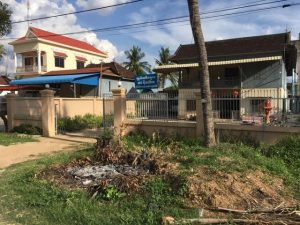 I have seen in travel magazines articles which are basically “Two Perfect Days in ______” , itemizing the way to luxuriously experience the best (as defined by that individual writer) of what the focus city has to offer.  This is not one of those travelogues but one full of unexpected adventures and discovery.  After leaving my school tour group at the Siem Reap Airport, I met my friend Melanie who flew in from Bangkok where she is studying for a year and we headed off for our 2 full days of adventure together. It was dark when we arrived and our first surprise was that our AirBnB host lived in a warehouse area up a dirt road which was totally deserted at night.  A lovely town house house in an industrial complex (we didn’t see any other lights or even neighbors) but not congenial for visiting around town and so the next morning we moved to a French-run boutique hotel within walking distance of the city sights. 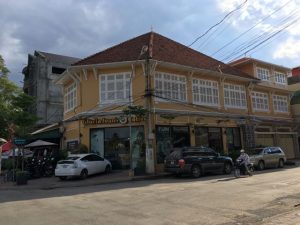 We hired a guide and a four-wheel tuk-tuk pulled by a motorcycle for the day.  Our driver always was sure to wear his helmet as the fines are fierce and common here – probably more to collect revenue then for a sincere interest in safety.  The 2-3 children riding on the back with their mothers though are helmet-less.

The Khmer Rouge destroyed the infant railroad system built by the French which connected Battambang with Phnom Penh and elsewhere.  Some remnants continued to be used for local transport through the ingenious use of a small bamboo platform on wheels, originally powered by hand and now powered by an small gas engine for tourist purposes.  Melanie, together with our guide and me, sat down on a pillow on the bamboo board and we were soon moving forward at about 35 mph over old crooked rails with a loud clatter as we crossed each rail connection as they did not quite meet each other.  This did not meet any kind of safety regulations whatsoever, anywhere.  We were both quite surprised and a little concerned about the speed – but soon relaxed into the experience as there was no choice at that point.  We don’t think there were even any brakes — just an on and off motor.  In addition, there was only one set of rails, so when another bamboo platform car was spotted in the distance, both of them slowed and one of them stopped, we disembarked and the whole contraption was quickly dissembled and then taken off to the side so the other vehicle could pass.  The system for right of way was unclear to us but given the importance of this tourist attraction I assume not too many collisions occur!  The trip was about 5 miles in each direction, with a stop at the end with chatchka sellers and a dirt path to a local village. 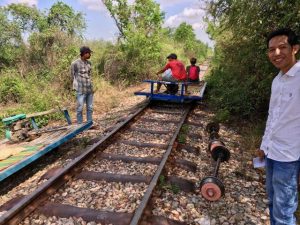 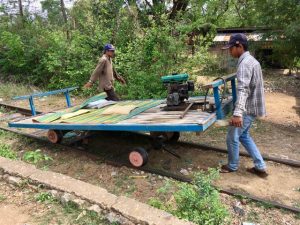 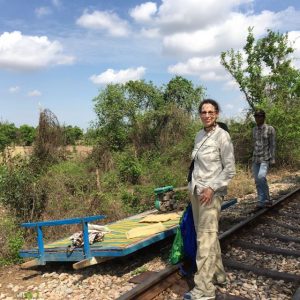 Lunch in town of Vietnamese Banh Mi sandwich on good French bread and then a trip in another direction into the countryside to a local elementary school.  Two classrooms were in progress, one for about 30 9-12 year olds and one for abut12 children ages 13-15.  The teacher for the younger class was extraordinary.  It was clear what a good teacher she was, how responsive the children were as she proudly showed off some of the girls reading skills.  She has taught for 23 years and said (through our interpretor) that she felt it urgent to impart her knowledge to her pupils.  She also told us with a smile that she just received a promotion and as of next month would be making $250/month.  We asked the age of some of the children and Melanie and I were both shocked to discover that they were far older than they appeared. 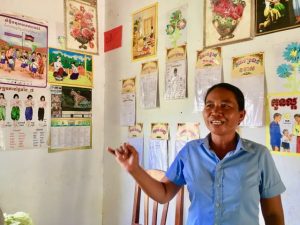 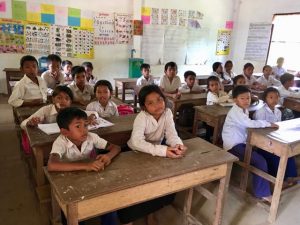 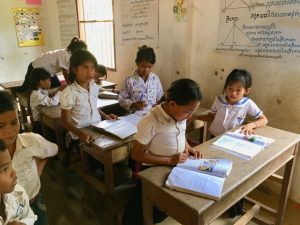 The Banon temple was built in about 1000 and like many religious pagodas in Cambodia was originally built by a Hindu king with Hindu iconography in the sandstone carvings.  It then became Buddhist a few hundred years later when another ruler converted himself and his country to the newer religion. 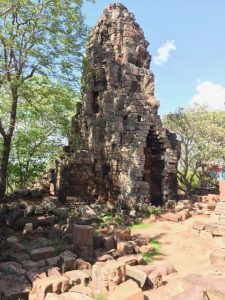 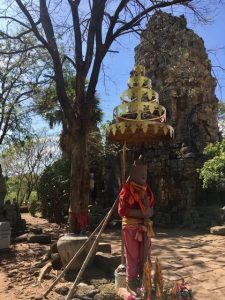 There were 385 steep steps up to this temple on a hill  on a very hot day — and we were followed by groups of young girls trying to fan us in order to obtain tips.  We were told later that these children go up and down maybe 22 times a day when they arrive after their morning school.  But our guide was disapproving of encouraging them — and especially giving them money – as it gave their family a reason to keep them from studying and going to school.  After all, they are only girls. 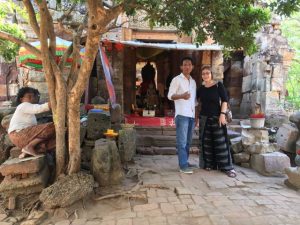 The temple is in great disrepair, an archeologists dream, trying to fit the pieces back together.  We were not prohibited from climbing wherever we wanted, although Melanie and I tried to avoid stepping on 1000 year old carvings.  The local visitors appeared to have no compunction about doing so – or throwing plastic bottles and wrappers on the ground. 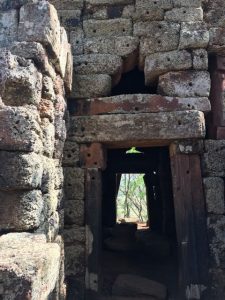 At our small boutique hotel, I swam in the pool in the evening just before a monsoon-level deluge opened up with thunder and lightning around us, solid sheets of rain drumming on the metal roof, turning the road outside to a muddy pond.  In fact, I turned in the hall to see a small frog hopping along, heading for the lovely weather outside.  We ate  pita, baba ganoush, hummus and incredibly good home-made sorbet for dinner before heading up for a long sleep.  The end of day one.