At 6:30 am we are awakened by a great clashing of symbols and drums.  It goes on for quite a while and eventually I put on my clothes and go downstairs where I find the source: a long parade of ethnically Chinese inhabitants in this part of Yangon (which is called “Chinatown” after all) celebrating with young men holding paper dragons and floats carrying Buddha images and older men walking serenely in groups down the side of the street.  I assume this is also a Buddhist event to match that of the Myanmar Buddhists — for the end of rains and full moon — in this case one of the largest moons in the last 48 years.  It is exciting to see such involvement with so many people with few onlookers. 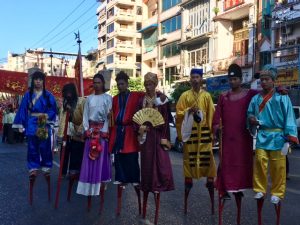 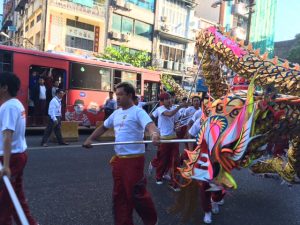 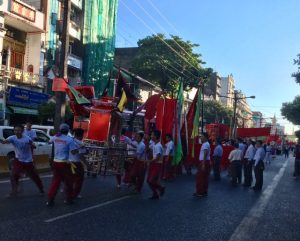 Now only 4 of us, we head South in our minivan toward Hpa-An.  We stop first at a large and moving cemetery to those who died in the British forces during WWII, British, Scottish and Gurkha regiments among others.  The remnants of the British occupation here are now so faint, reflected in a few old buildings, some traffic circles, and  the red and white stripes painted along certain important curbs.  We were told by one of our guides that the change of the  right hand drive cars over to the right hand side of the road happened overnight by a decree of the government to distance itself from its colonial history.  But it can not forget all the men who died trying to free this land from Japanese occupation and this large memorial remains well maintained and unlike anything else we have seen.  Veterans Day just passed a few days ago and there are wreaths from all the major embassies under the main portico and small poppy wreaths laid at the feet of some of the gravestones for the fallen men with tags that say “In memory of our uncle” or “You will not be forgotten”. 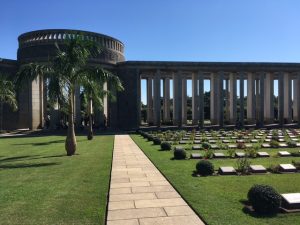 Further on, passing through a small town on our way, I see bicycle shops, small street-side restaurants, and grocery stores, a shoe shop, hardware store, grains and rice distribution center, and a place with piled up soda in cases ready for delivery to smaller venues.  There is a fruit seller with a straw basket with apples and tangerines sitting on the ground and a little further on a storefront with a pile of old tires piled up into stacks — perhaps to be sold and reused.  The children are just getting out of a school and a man smokes a cheroot in his plastic chair next to a pile of pomelos which are like grapefruit.  We pass an electronics shop, with cell phone cases and, I assume, lots of Samsung Galaxy 7 phones returned from the U.S., making their way here through China.  Back in the suburbs, we pass concrete 2 story houses with tin roofs and thatched awnings for shade and older all wood buildings on stilts with woven bamboo matting for walls.  Everything is falling apart, discolored and tattered.  We are definitely in a poor countryside.

And now traffic slow down as we see procession after procession as part of this holiday period.  In this Kayin State, it seems each local village takes part in a walk to the local temple to bring new robes to the monks.  Each group is individually distinctive by the identical colored dresses of all the teenage girls who are holding up a long banner and seem quite serious.  This is in great contrast to their male counterparts who are hopping and dancing up and down to loud music blasting from a truck that is leading all of them.  We are lucky we are going against the direction of this parade — the traffic behind the procession will probably have to wait several hours for everyone to pass.  I am beginning to see that waiting in traffic is just part of Myanmar today’s life. 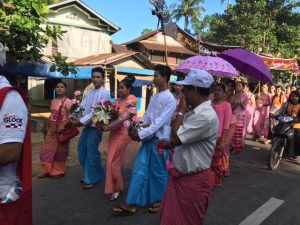 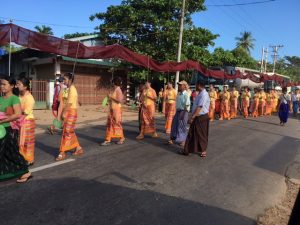 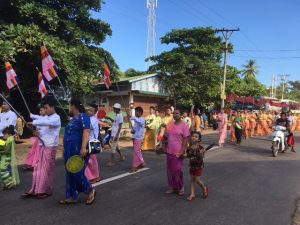 Green countryside stretching out for a while and then another procession — this time all the monks from some nearby monastery, there must be over a 1000 of them, walking single file with heads shaven in their maroon robes with begging bowls.  All the inhabitants of this village line up in their best clothes holding containers filled with white rice and scoopers to ladle rice into the bowl of each monk that passes.  Many of the monastery denizens are children, doing their mandatory temporary time as novitiates and there are a few very old monks as well, their teachers and mentors.  Each is walking in sandals, collecting food and offerings for their monasteries.  In addition to rice, money and other packets of goods are being given to the monks, a daunting task considering the endless stream that I see coming down the road. 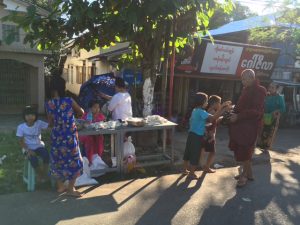 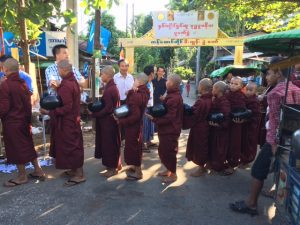 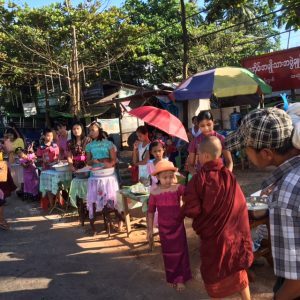 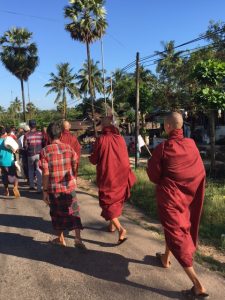 Hpa-An is known for its beautiful landscape of sharp oddly-shaped karst mountains that jut out of the flat plain, like in Halong Bay, Vietnam, and Guilin, China.  Claudia is now not feeling well and stays behind in our hotel as we go to see sunset in a nearby pagoda to revel in the sun setting behind an impressive background of lake and mountain. 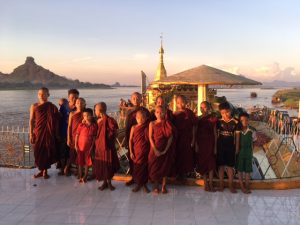 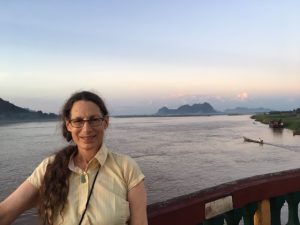 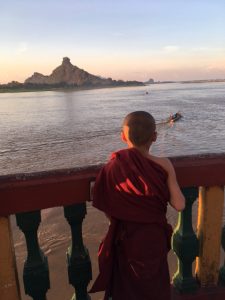 The weather is hot and humid and we now recognize how lucky we were to have the cool rainy weather of the North.