We are driving in the hills of Sri Lanka toward the city of Kandy, at this country’s central heart.  It is the essence of tropical, with great soaring coconut palms and green big-leaf trees blanketing the landscape.  Hills rise on either side and small concrete buildings appear on the road, bananas hanging from the shops in bright green and yellow mounds.  Our driver points out the avocado trees and I was just told that we can get Durian, the king of fruit, by the roadside.  Yes!   Andrea and Diane have never seen or tasted it so it will be an interesting experience for them. 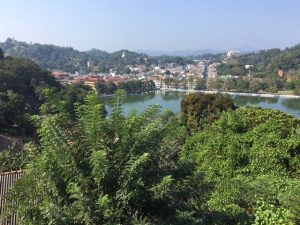 Women walk along the road holding umbrellas for sun shade.  Diane pointed out how few women she sees who wear saris here and I noted from old photographs that the traditional women’s dress here is a form of blouse and wrapped sarong.   Driving through a small town, the real difference between India and here is the absence of garbage on the streets.   Our driver says the government has put considerable effort into making people aware of the trash and plastic issue and it seems to be paying off. The other difference is that ALL the motorcycle drivers wear helmets.  We see very few bicyclists along the road.  People are polite on the road as well and although driving lanes are not respected, it appears that citations for violations are frequent and the driver population is duly wary. 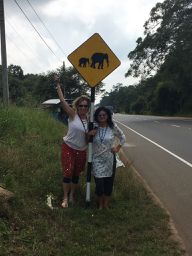 Since our arrival, we have been living in great luxury.  The hotels we have stayed at are magnificent.  One, especially, the Forest Rock Garden Resort, was designed to replicate the original palace city of the great archeological site nearby at Anuradhapura, with massive stone columns and statues, the most magnificent swimming pool I have ever seen, villas all built on concrete walkways above the forest to preserve the ecology, and huge rooms, with smooth finished cement floors, canopied beds and ultra-modern bathroom appliances.  There are numerous small sitting areas, a meditation center, and I got lost quite a few times trying to find my room on the property.  The restaurant served superb food and provided the highest level service. 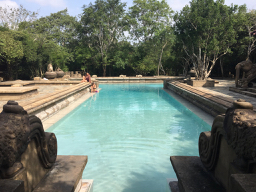 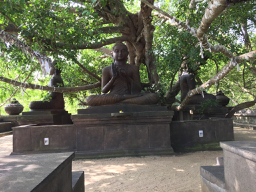 Our bicycle ride through the ruins of the great Buddhist site of Anuradhapura in the late afternoon was memorable.   Cool breezes passed around us as we rode, passing through some local villages as well as around the great stone ruins created as far back as 300 b.c. 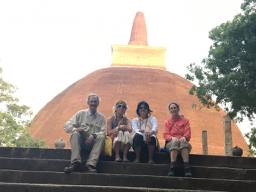 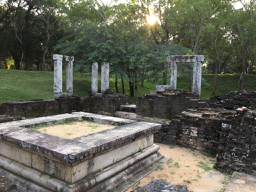 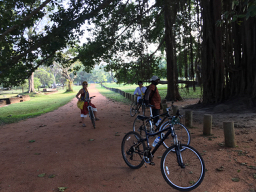 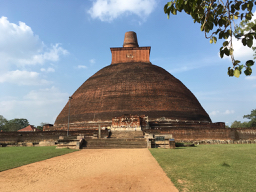 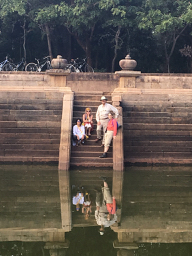 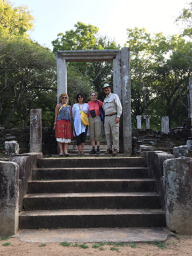 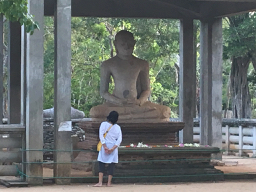 A cutting from the great bodhitree in Bodh Gaya was brought here and the tree remains a central pilgrimage site.  A great white stupa stands nearby it emanating with chanting and fluorescent lights in the evening.  Far more orderly and well maintained then its India counterpart, Buddhists from all over the world come to this place with its sacred history.  The four of us were blessed with white wrist ties as we stood under the great tree whose ancestor saw the enlightenment of Gautama Buddha.  I said a prayer for my friend Kathy who passed away a year ago today. 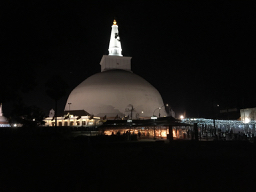 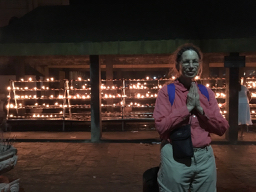 The remains of a great Buddhist civilization is also apparent at Sigiriya Hill, a long steep climb past water gardens and caves where monks spent a lifetime in silence.  I walked only part way as I chose to preserve my knees but greatly enjoyed walking on my own up and down through the rocks which mark thousands of years of history. 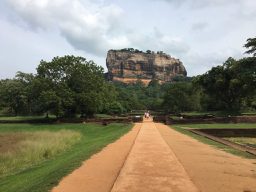 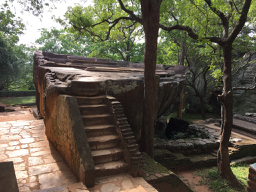 I did hike up to the Dambulla cave, on the top of a smaller hilltop, where great Buddhas have been carved into a series of caves surrounded by painted frescos and used for worship and meditation.  A white painted stone and stucco exterior created a long arcade which now protects the cave entrances from the elements. 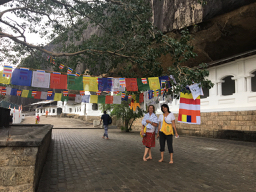 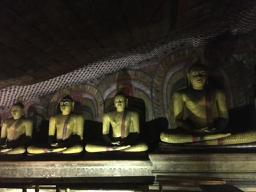 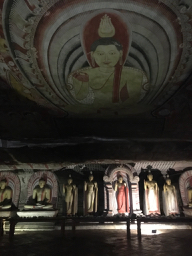 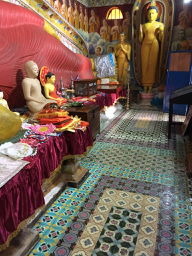 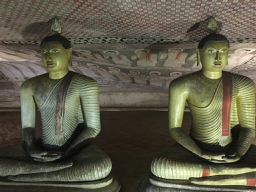 Our planned “safari” trip to a national park took us to a major elephant reserve, with large and small Indian elephants crossing the open spaces and actively breaking down giant bamboo to eat.  Our driver/guide for this trip was very tuned into birds and he pointed out a huge array of local birds, including peacocks strutting in full regalia.  The other animal we saw were a number of wild foxes, making their way both as predator and as prey for the crocodiles in the scattered bodies of water. 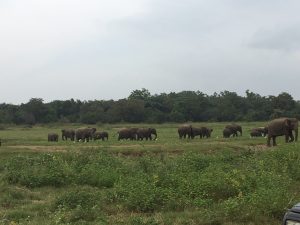 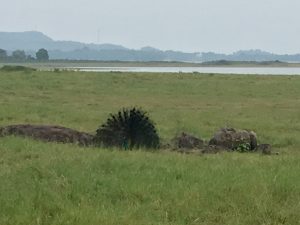 Peacock in full display with two pea hens nearby

We celebrated Bill’s birthday in style at our hotel with the help of the staff. 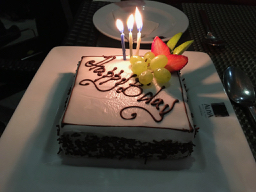 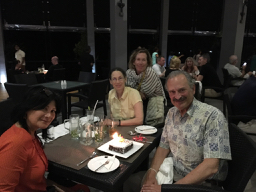 So now we are back on our way to Kandy, and we did stop off at a roadside stall and Bill and I shared a small Durian together with great delight — while Andrea and Diane declared it unfit for human consumption. 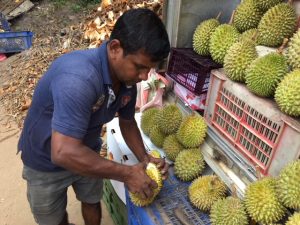