I have only a distant memory of Kandy from 1976 and what I remember is colonial-style buildings and a great green lawn.  Now, as might be expected, there are additional layers of construction everywhere although the town still has a quiet feeling as expansion is limited by the geography of surrounding hills.

We visited the Temple of the Tooth in the evening, lit by lanterns, while great crowds of people waited for a glimpse of the inner chamber where a piece of Gautama Buddha’s tooth now rests.  The ownership of this piece of bone was the cause of several wars which makes you wonder about Buddhism in particular and religion in general.  Bill was discouraged by the commercialism of the experience, with very loud blaring loudspeakers outside and queues of gift-carrying devotees, but it was visually dramatic and quiet inside with a sincere sense of devotion emanating from the white-clad pilgrims. 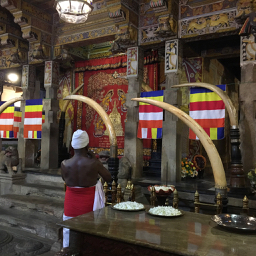 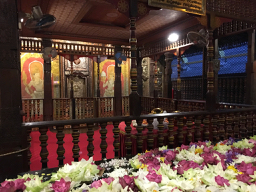 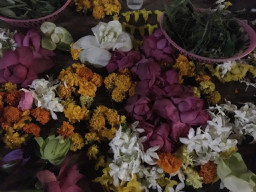 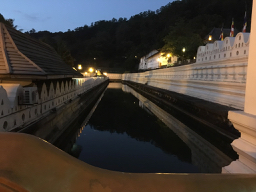 A visit to the Royal Botanical Gardens, established in 1812, was impressive, with a collection of tropical trees, now quite old, spread out around a river bend.  The early English botanists must have been in paradise finding new flora never previously categorized in Europe, although from the history of these gardens, they rarely lived very long in this environment.  Most memorable for us is probably the 24,000 “flying foxes” or fruit bats hanging upside down from trees. 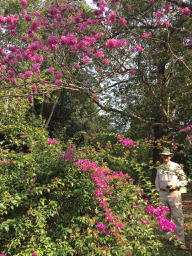 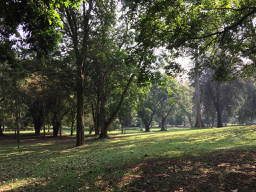 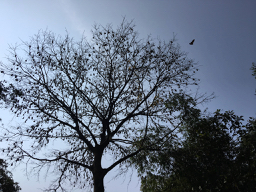 Flying fox with his hanging friends

Now on the way down hill from the highlands of Sri Lanka and the air is considerably warmer.  I see more and more churches the closer we get to Colombo.  The school girls in their white blouses, white skirts and school-colored neckties, now wait in great numbers by the bus stops.  The Hindu temples here are painted with yellow and red stripes, not white and red like in South India.  The small shops in this town we pass through include well-known brands such as Bata shoes, Lanka Bell, and Pizza Hut, which is ubiquitous all over Sri Lanka.

We visit a tea factory and see the process from beginning to end, still using the old machinery left by the British entrepreneurs, drying and rolling the famous Ceylon tea leaves into many grades and qualities of the product. 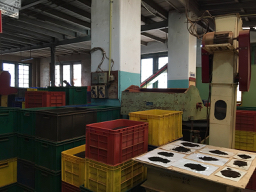 Colombo was a mass of traffic, polite but fender to fender.  Traffic policemen periodically directed traffic to prevent complete gridlock.  We find out later an Indonesian dignitary was passing through and the government had shut down certain roads.   There are a few traces of the old Colombo scattered in the fort area — the rest is a high-rise construction zone, very tall buildings going up very quickly.  At dinner at  a lawyer friend’s house that night with Bill, we are told that the Chinese are dredging up the ocean and creating more landfill for new development, such as was done in Dubai and as we have seen in Malaysia and Singapore.  The environmental impact?  That I doubt is of any concern.  We were also informed that the basement and parking areas of an immense apartment structure, partially completed, has filled with water as something has changed with all the excavation or was miscalculated.  This dinner was exceptionally enjoyable and we had fabulous home-cooked food, the staple being jack fruit curry and a vegetable curry in coconut milk.   This very educated couple had never heard of a vegan before and my friend’s wife had to study up before planning her menu. 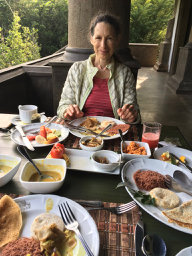 At an earlier dinner at the Forest Rock Garden Resort

We are now on a train, heading South to Galle.  The train departed on time at 6:55 am and I am, as a dedicated train enthusiast, enjoying every minute of the 2.5 hour trip down the coast.  We have first class tickets (at $5.50/ticket) so we have assigned seats in the last car, the observation car, with large picture windows at the rear, so we are all facing backwards.  The scene is one of tropical gardens on one side and on the other we see beaches and lapping ocean  suddenly come into view around the bend. 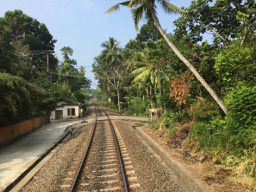 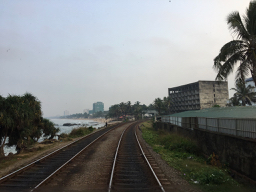 It is wonderful to see traditional houses, many of them in poor condition as it takes only a little bit of neglect for the heat and moisture to overcome even the sturdiest of structures.   Those houses are stucco with terra-cotta tile and wooden Victorian-era trim around the front veranda area, which all house have in this climate.  Wooden shutters keep out the heat.  We pass the occasional Hindu temple along the way.  Many of the homes have satellite dishes, even some that look like they are in an advanced state of decay. 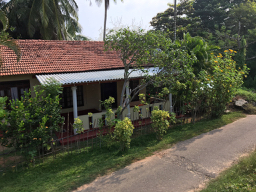 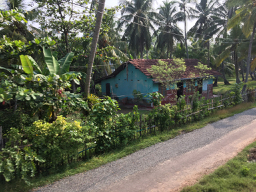 The sun has come out and it is getting warmer.  The car itself is very old ad falling apart but the seats have even replaced and are comfortable. Our glass windows open in our car that has not been cleaned or refurbished for decades.  But there are electric fans on the ceiling.  We pass many lagoons and inlets from the sea and as we get closer to our destination, the houses become larger, more modern and are closer together. 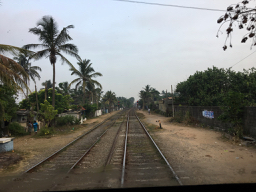 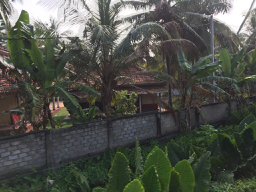 We find out that we are arriving into Galle in the middle of the annual Galle literary festival so that the fort area where we are staying will be very busy.  Our hotel is located in the center of the fort area and although this is indeed the most crowded event all year for this small enclave of history, it is still a calm and unhurried place — and hot.  There is a world of good food and high-end local shopping here as well.  Freshly made Tamarind and Lychee sorbet! 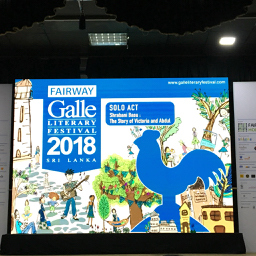 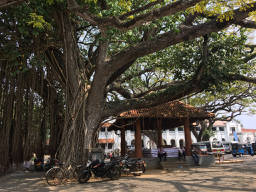 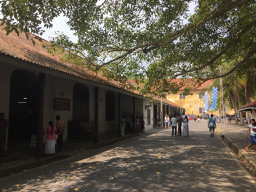 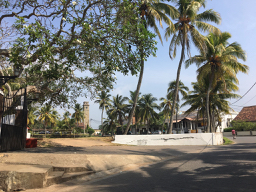 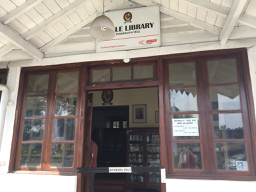 Galle is a UNESCO world heritage site and there is an attempt to retain the flavor of its old houses.  The Galle fort was founded by the Portuguese, taken over by the Dutch for about 150 years and then occupied by the British before independence in 1948.   I was fortunate enough to tag onto a special historical architecture tour being given one morning by Channa Daswatte, a well-known Sri Lankan architect and writer who is participating in the literary festival. 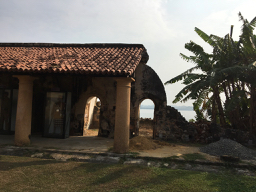 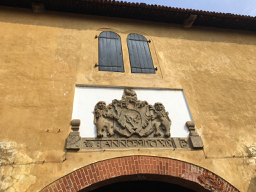 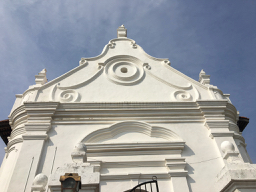 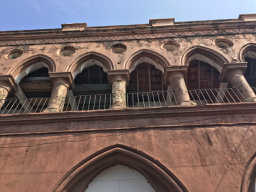 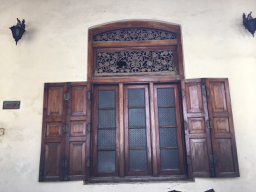 We were able to go into houses he had worked on and renovated as well as homes in their original state that we were invited into.  He told us of his frustration in trying to maintain the multi-cultural architectural heritage of the Galle Fort area at a time where developers are buying old homes and rather than restoring them, waiting for them to collapse upon themselves so they can build something new. 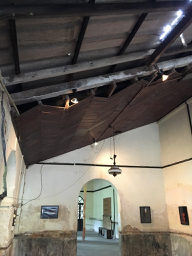 Post Office open since 1815. Renovated in 1998 and then left unmaintained 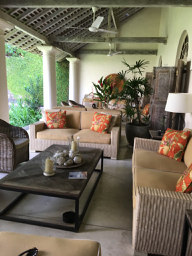 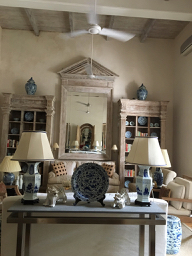 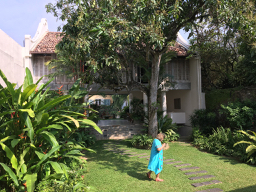 Renovated house and grounds by Channa

Bill and I also attended one of the literary sessions by the author of the historical work Victoria and Abdul, on which the recent movie was based. She told us about 80% of the film was historically accurate, the rest was part of the entertainment.  I would love to come back and spend the entire 4 days of another festival here – a charming place with interesting people.

We drove on the fairly new expressway directly to the airport  and I now say goodbye to my lovely tour mates as I leave for a few days with my Indian family in Bangalore before heading home.

Sri Lanka was a surprise after 3 weeks in India — more modern and sophisticated in many ways, trying to retain some of its old traditions while fighting the uphill battle of commercial expansion.  A more relaxing place than India, it is also more even tempered and allows one to savor the tropical lifestyle in more muted colors, sounds and smells than its northern neighbor.  I hope to return.