The old fort area of Kochi, the former Cochin, remains a peaceful enclave of tourist sites, hotels, and the remains of the traditional way of life.  The military are based here and we have occasionally heard a startling boom when target practice is under way or, as it was our last night as we sat out on a deck by the the water under the starts, sudden fireworks.  We visited Jew Town, entering the old temple, the cemetery and the shop of Sarah, now 96 years old, and one of the last 5 living remainders of the once-thriving Jewish community, as well as the old Dutch Palace and Church. 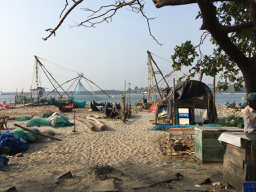 This is a multi-layered society, the Hindu world overlayed with Portuguese infuence and its concomitant conversions to Catholicism, then the Dutch and its reform churches, and finally the British imprimatur with its military stamp.  Throughout it all, trade remained the king in an area rich with spices, textiles (Calicut, where calico came from, is North of Cochin) and other commodities.

On our way here, we were able to stop by a coir making factory — with looms which looked hundreds of years old.  Women and men were spinning the fibre out of coconut husks and weaving it into the stiff durable rugs and floor mats we have seen all our lives.  But seeing it made from hand, without any electricity used at all, was quite an awakening to the cost of a common product. 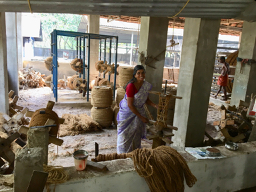 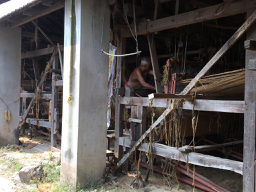 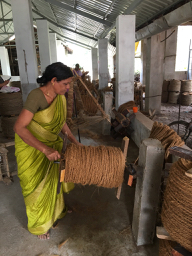 Our group here spent quite a bit of time walking, exploring, and doing last minute shopping as well.

Some of us visited the Dhobi Khanna which was created by the Dutch as their laundry area and which still remains today as a centralized facility for a traditional group of people washing and ironing. 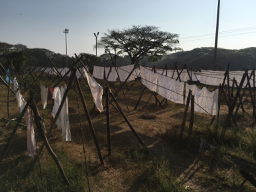 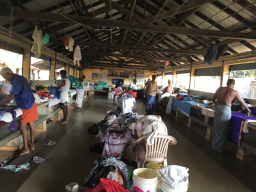 A highlight was a Kathakali dance performance, including a demonstration of the application of the complex makeup which is part of the traditional artistry.  There was a fine Mohini Attam dancer as well as the two male Kathakali dancers, the hero and the demon seductress, displaying their skills. 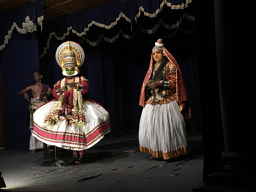 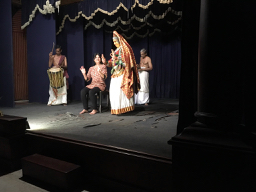 Andrea was pulled on stage to participate in the demonstration 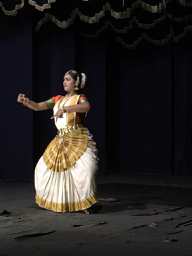 We all spoke a bit as we sat round at the end about what struck us the most on this journey we have taken together — and the responses ranged from the intensity of the sounds and colors to the important role that religion and belief play in the daily lives of the people.  India is never the same experience for any two people and this group has absorbed much in a short time:  from the  narrow lanes of the Muslim section in Old Delhi, to the surreal world of Auroville, from the tranquil world of coastal Tranquebar to the Pongol-rich intensity of Madurai.  We immersed ourselves in the great temple complexes at Kancheevarum and Tanjore as well as the small village temples in Chettinad.  We will remember the commercial chaos of Kovalam and the old-world life along the canals of the Kerala backwaters.

It is all interesting and it all helps us reflect back on who we are and the relative subjectivity of the values of our own culture.  For me, that is the real treasure of traveling.