It is early morning, 6:30 am, on a backwater inlet in Kerala and I am sitting on the prow of our houseboat, listening to Sanskrit chanting from a Hindu temple across the water, as well as seeing and feeling the morning smoke that seems to be endemic for this part of the world.  The birds are all awake, the small high chirps and whistles of the jungle denizens, the honks of water birds and the deep caws of the larger scavengers.  As expected, there are now several radios playing in the distance, some Bollywood music and a lovely classical Indian flute.  The air is lightening and the tall coconut palms all along the waterway stand out in greater contrast, moving from grey to dusky green.  The water has only the smallest shimmer of movement.  If I mentally block out the red blinking channel marker and one electric light in the far distance, I can easily imagine this location looking exactly the same 500 years ago — and can see what a prize it might have looked like to the early spice traders. 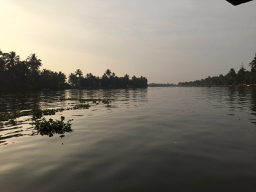 My birdwatcher members here say we have seen, among others, a Black Drongo, Brahmany Kite, 3 kinds of Kingfishers, 3 kinds of Herons, Terns, Cormorants, Indian pond heron and the Indian Darter.  As we see on every signpost in the region, this is ‘God’s Own Country”. 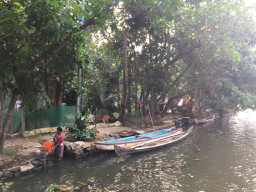 Our time on on the Emerald Isle was a good introduction to the life of this area.  Staying in a traditional Kerala home, updated for us visitors, served wonderful home-style cooking, we walked around the dirt paths that skirt the water and are the commercial lifeline of this place.  The center of this island comprises brilliant green rice paddies surrounded by the farmers’ homes on the water.  We took a 2-hour late afternoon boat ride through the smaller inlets, some completely clogged with the invidious water hyacinth, voyeurs to a life lived washing, cooking, and cleaning in the canals. 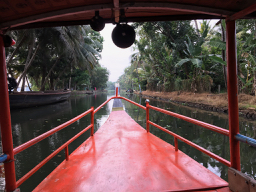 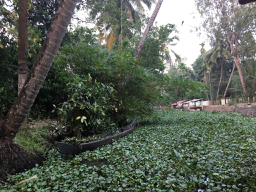 We see sunset from our boats, as the sky changes to a brilliant orange.  Below is the same sunset about 10 minutes later — untouched from the original color taken on an iPhone 6. 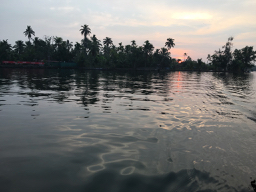 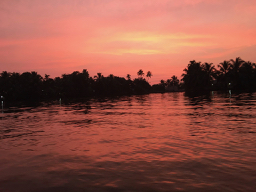 We are treated to a special procession as this is the 8 year anniversary of the installment of a statue in a local Hindu temple of a social advocate for the poor of this area.  Down the dirt path comes some fire handlers and a small group of yelping, jiving, teenaged boys and young men (it is now dark and it is a good thing I was holding onto the trunk of a coconut palm or I could have been pushed into the water).  This is followed by a long line of about 100 white saried women, young and old, each holding a metal tray with rice, flowers and a half-coconut lit oil lamp. They chant and sing together in various groups as they walk along.  It was a magnificent sight.  Some of us followed them to the Hindu temple, ablaze with light and loud-speaker sound. 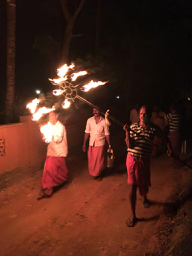 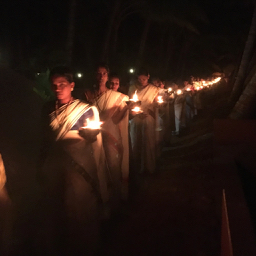 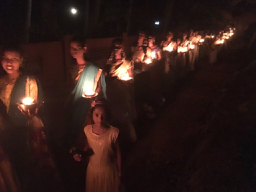 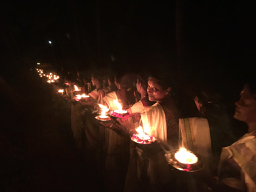 It has not been all smooth-sailing.  Two of us had bad nights on the Emerald Isle with intestinal issues and I, with usually no problems at all, as well as 2 different folks, had to deal over the last few days with the results of a dinner in Madurai with way too much chili.  But we are all mostly better now. 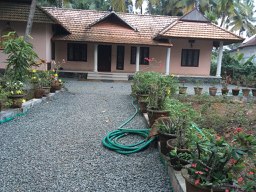 Our homestay at the Emerald Isle 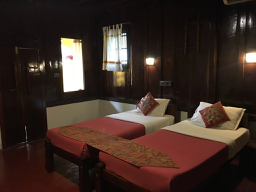 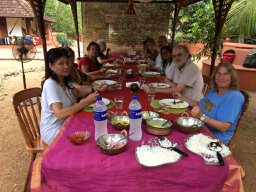 Lunch on the Emerald Isle

The next morning we embarked on our two houseboats, each with 3 bedrooms with private baths.  Small spaces but it works.  Our kind captain, cook and assistant make 3 delicious meals for us as we sit and watch this tropic world float by.  When we dock for the night near a small village area, we take a walk together winding through vegetables gardens, with bitter melons and various gourds hanging from vines, and then following dirt paths past people’s homes, until we come to a loud speakers blaring out a service from a bedazzled Catholic Church, ablaze with colored lights.  The intonation and inflection of the priest from this Church was remarkably similar to the rabbinic chanting on certain high holy day Jewish prayers.  But despite the progress of the last century, the women are still sitting in a separated section from the men.

On the ferry on way to houseboats 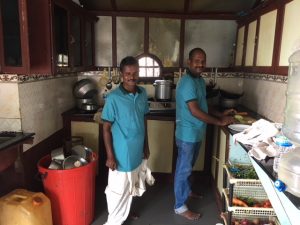 The cooks on one of our houseboat 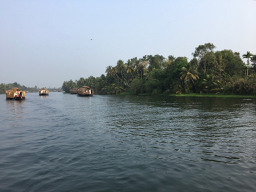 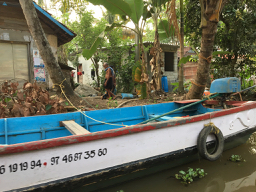 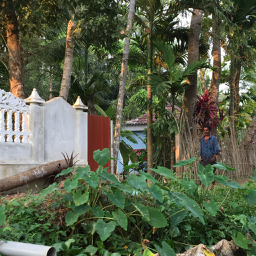 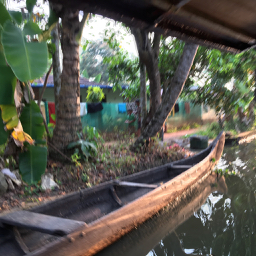 The birds are now winging across the water looking for breakfast.  I see a woman in an orange sari across the canal and hear her beating her clothes against the rock as she does her morning washing.  Now I can hear another person in the distance also thrashing their clothes in a time-honored and obviously successful way to  do laundry.  A man just went by in a single-person crude hand-carved wooden boat, rowing with one paddle, as he goes to deliver a basket on the back.  The many children we have seen along the way seem well groomed, the girls in two braids tied up into two loops at the back of their heads with ribbons, while the boys all have well-trimmed cuts.  All look healthy and none of the children look overweight –  they are outside playing and working after school.

Our time in the backwaters has been a peaceful return to a community living a traditional lifestyle, connected to the water and the earth.  The blaring loudspeakers and gaudy lights are the main visual concession to the 21st century but now we will leave this behind as we head to our last days in India in Kochi.