Here is my insight for the day:  While we in the U.S. have just as great a gap as here between the housing of the very rich and very poor.  But our government offices and locations for federal and state services are usually located in safe, clean buildings.  Not so here,  where we pass disintegrating district offices and health centers, places only the destitute would be willing to go.  Available and affordable to all — possibly;  but safe and hygienic — no. 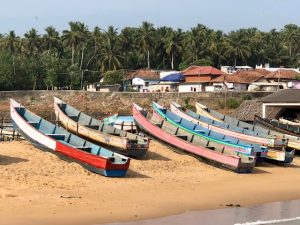 Our long drive from Madurai in Tamil State to almost the very Southern tip of this country was uneventful — a long stretch with huge cement factories along the way.  We did turn inland and make a stop at the Padmanabhapuram Palace which was unfortunately closed for Pongol but visiting the village within which it was located allowed us to see a local celebration with women drawing Rangoli designs on earth (it looked as if it was a competition) in their town square and to feel the pulse of a small village. 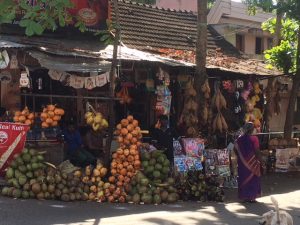 In Padmanabhanpuri. Photo by Andrea.

Kovalam was once described as the most beautiful beach in India.  The beach and water, a long curve from the lighthouse toward another point, is still beautiful, but it is now ringed with a mishmash of restaurants, small shops, guest houses and hotels, dulling its interest as a place of natural beauty but increasing its value as a place to see the local culture in action.  Our group walked and shopped and sat on the beach under umbrellas and swam in a warm sea for the day.  A welcome break.  The only problem for me was that every evening and morning the air was filled with smoke from fires, exacerbating a cough I developed.  Fresh clean ocean air — and particle-rich smoke – together in one complex place. 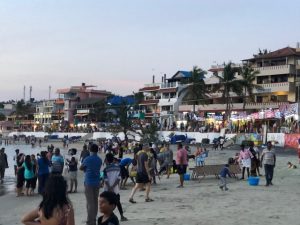 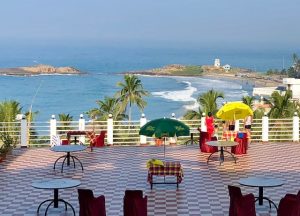 From our hotel balcony 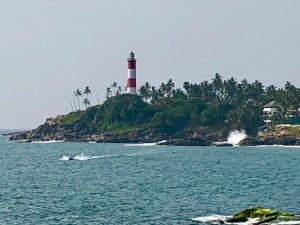 (above photos were all taken by Angela).

We are now on the bus North, up the Kerala coast from Kovalam to our homestay in the Alleppey backwaters.  What do I see out the window?  New construction after new construction .  Very large, very modern buildings.   We just passed Infosys and then there is UST Global in 20-25 story huge brand-new space-age looking campuses.  Then there are the apartment complexes rising to support the workers for those high tech sites and the restaurants as well to feed them.  The road is being improved and upgraded for the increased traffic stream.  It of course makes sense.  With engineers to be had here for half the cost in the U.S., and land and construction at a very cheap price, why not move company offices here?  But it is apparent that globalization has deep costs with respect to local environment and infrastructure in a location without urban planning or pollution rules. 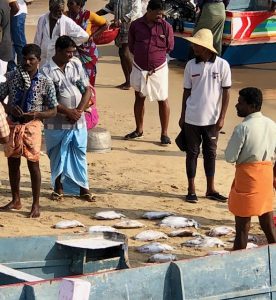 Fishermen on the Beach with their Catch

Large new auto showrooms abound and only occasionally do you see an authentic traditional Kerala house on the side, with sculpted awnings and sloping roof.  We are now in a small town which is a hodgepodge of tea stalls, two story shops selling everything from toilet ceramics to high-end mens shirts.  Old buses with open windows lumber by filled to capacity with girls on their way to school.  An old fashioned “Indian Coffee Hose” is tucked in off the front of the main road.  Garbage is burning on the street.  Tyre (not tire) shops abound as well as small manufacturing shops and, of course, the occasional, temple, church and mosque.   There is also the large handpainted movie poster, although these are far less prevalent than in the past — probably the DVD has put a dent in movie theatre going here as well as in all other parts of the world.

On this drive North, passing through Quillon, we see an old anachronistic town center:  the old corrugated metal roofed buildings with Victorian trim containing the post office, the district registrar’s office, a few other administrative buildings, and across the road, what was or is undoubtedly a cricket field.  But we quickly pass by and are once again back in the world of square stucco buildings and new concrete structures.  We did pass a working elephant on the road which might be our only sighting as they are used less and less frequently for hauling these days.

We head into smaller and smaller roads and then our bus stops and I am confused about where we are — and realize we have arrived into Amiritapuri at the Anandamayi Devi Ashram, the hugging guru.  I had put that in our itinerary as a possibility if she was in situ but then forgot about it when I found out she was somewhere else in India at that time — but our kind bus operator followed through and brought us here, a bit out of our way.  But we are glad we came, not only for the opportunity to travel through rural country roads by the coast, but to see the enormous covered pavilion and stage where Amma sits when at home and to see the cafeteria, dining area and dorm area set up for all the foreign visitors staying here for long or short periods of time.   It would be a peaceful place to hide away. 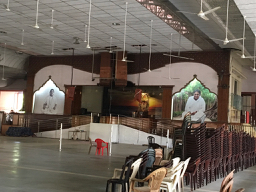 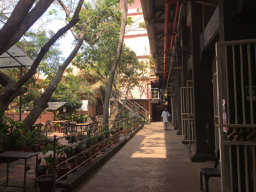 And now we land at a dock and begin unloading to travel in a small boat ferry to our homestay on the Emerald Isle and our time in the backwaters of Kerala.  Another post.