On the way to Madurai, during the days leading up to the Pongal harvest festival, the signs are beginning to appear everywhere.   We saw a cow in a village with bright pink decorations on its hide and now in the countryside a herd of goats appears over a hill, each with some colored powder in honor of their help to make this a good year.  Decorations in the market for Pongol: 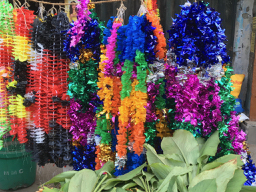 We see a woman blowing a conch shell in front of the Mother Teresa Women’s University together with other women in splendid saris watching one of their group cook the traditional pongol dish of rice and sugar.  We stop and are graciously included in the festivities.  The little girls look on and everyone wants their photo taken with us and invite us to stay to share the holiday treat with them but our schedule beckons on onward. 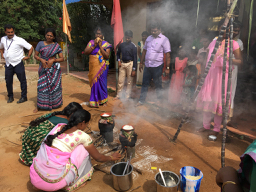 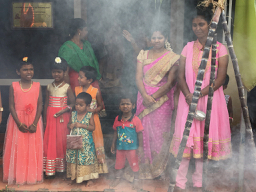 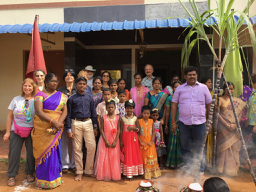 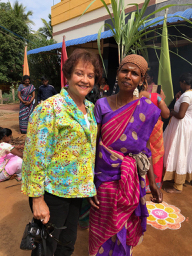 Arriving from the peaceful other-worldiness of Chettinad, arriving into Madurai was a cultural shock.   The main roads were designed for a few public vehicles not the mass of private cars motor rickshaws, motorcycles, goods laden bicycles and an occasional bullock cart that we find in the heart of the city. 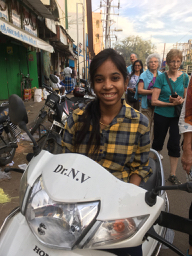 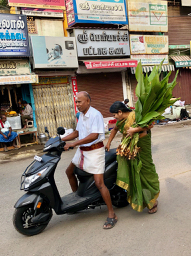 And we plunged right into the thick of it, taking an evening food tour to some of the city’s more traditional stops for foodies — starting with some sugar and jaggery choices in a shop dedicated to the sweet tooth, then moving on to a dosai shop, whose front tables were filled to capacity.   We were taken upstairs to the slightly pricier AC section to taste some of the most delicious crispy semolina dosai I have ever had.   It came with 3 chutneys, coconut, tomato and some form with mint. 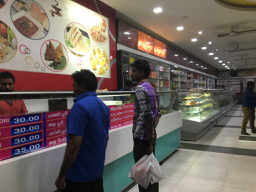 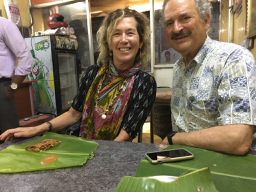 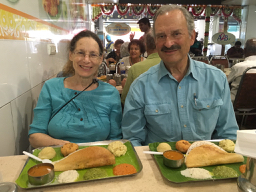 We next stopped at a small street stall where you stand outside to be served fresh steamed idli appadum made out of millet, rather than rice, together with a coconut and mustard chutney.   This was followed by a roadside stand where the meat eaters indulged in chicken paratha, cooked hot on the griddle, while the vegetarians had tomato uttapam, a thick flat pancake. 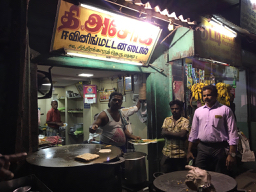 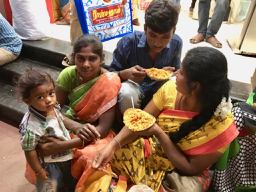 Last was the final sweet, a milk based shake made with ice cream and seaweed and famous in the Madurai area for the last 40 years.  Wonderful as the food was, the real adventure of the evening was trying to cross the street.  A two way street with no dividing line, with every kind of vehicle rushing past with no lanes whatsoever.  We followed with trepidation our guide Karthik and his assistant, and somehow made it safely across, even though Patty and I had to cross both directions an extra time as we forgot to use the toilet in the dosai restaurant. 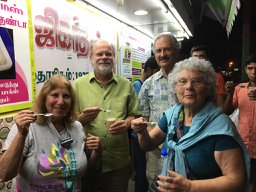 Madurai has changed greatly since I was first here in 1965, as you can imagine.  This quiet sleepy town is now a major urban area with numerous colleges as well as temples and churches.  We were told by our guide that the population is approx. 50% Hindu, 23% Muslim and 27% Christian, although I have not checked these numbers with a more reliable source.  Traffic is everywhere and the temples start blasting loud speakers in the early morn. 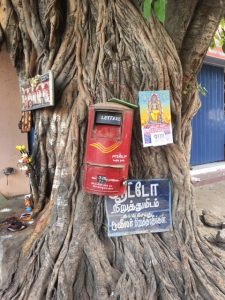 But all the people retain the same open and friendly attitude to strangers that I remember, willing to help and interact with genuine interest.  Barbara related a story how after shopping unsuccessfully for a certain kind of scarf, she saw somebody near our hotel with the kind of scarf she was looking for and asked the person what it was called and where she could find it.  The women took hers off and gave it to her. 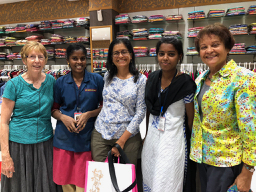 We left the hotel at 5:30 the following morning for another tour — this one to see the small neighborhood lanes of Madurai as the day begins — and this is a very special time.   It is the Pongol Festival, a form of harvest festival in Tamil Nadu, when a new year begins, and the beasts of burden are honored for the day, decorated with colored powder and flower chains and do not have to work in the fields.  It is also a time when everyone gathers with family, gets new clothes, and attends their local temple to decorate the Nandi bull in most Shaivite temples with the same fruits and flowers as their breathing brethren.

On our morning tour, we see the women engaged in their first activity of the day, painting their doorsteps with colored powder in beautiful designs, called in some parts rangoli. 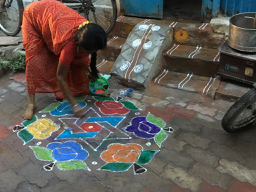 We also are shown where the milking of the cows takes place in the neighborhood and the shared water supplies can be found for this niche of society.  The markets are now opening and the wholesale markets display great crates of oranges, pomegranates, and apples while the many varieties of bananas hang from green to yellow in a separate alleyway.   The vegetable market is next, filled with potatoes, tomatoes and the round “indian” eggplant as well as greens of every variety.  It is a melange of incredible smells, sounds and sights. 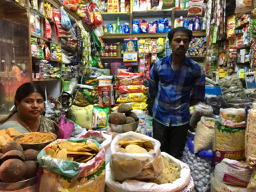 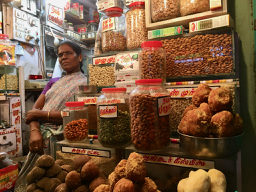 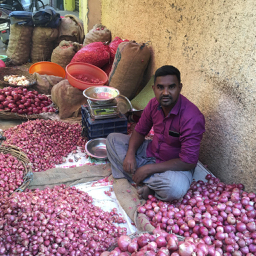 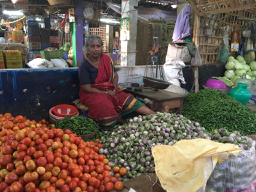 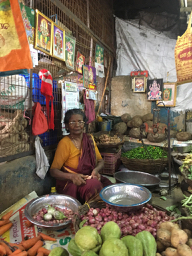 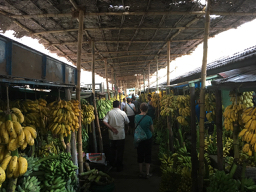 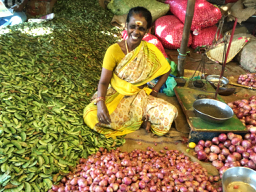 At the end, our guide takes us for introduction to paan, the rolled beetlenut leaf concoction that is chewed at the end of a meal and used occasionally by some and addictively by others.  Overuse is cancerous. 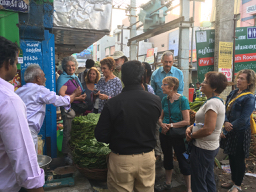 We were told there was a  “doll-making” village we should visit and so outside town we come to a small group of building where we find plaster casts – one of nothing but Catholic religious images and one of the more expected Hindu pantheon.  We are surprised but interested in how they are made.  The highlight of that stop was a group of very cute little girls who came on the bus to give us presents — small pieces of jewelry – for pongol. 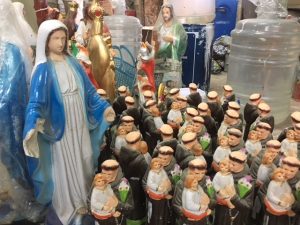 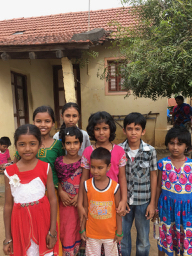 A visit to the Ekta Women’s Resource Center was one of our most educational experiences of the trip, listening to the founder speak about the status of women in India and what her organization is doing through education and counseling to turn things around for abused women and young girls.  And how far they have to go dealing with a male bureaucracy that tells women “to just adjust to the situation” including in cases of incest as well as physical abuse.  Bimla’s young acolytes, mostly college graduates, told us how some of their parents were not in favor of their working for such a progressive organization but also that some of their husbands (although they looked too young to be married!) were very supportive of the work they were doing.

The City is already crowded but on Sunday night, 1,000,000 people are anticipated to attend the great Meenakshi temple ceremony on Pongol Day.  We attend the night before and it is a very quiet night, with most people home for Pongol, so that we went through security and entered the great temple without any wait.  The great stone pillars and painted ceilings always astound.  And there were only a minimal crowd of people with us to watch Shiva, in his covered planquin, wait to find out if he could spend the night with Parvati, and then be ushered into the holy of holies.   There was something different than my last experience and Bill figured out what it was — only the week before they had banned the immense amount of smoke surrounding the palanquin so that it was not only easier to see but easier to breathe. 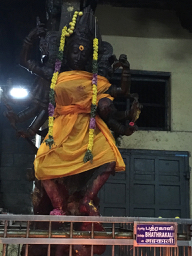 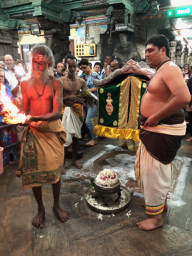 With Shiva safe abed with his lover, we were ushered out of the temple to the waiting trinket sellers outside on the streets before heading back to our hotel.