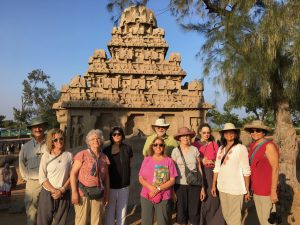 At one time, the silk and spice trade flowed through the town of Kanchipurm and to the great port cities on the Bay of Bengal, including British Madras/Chennai, the ancient port of Mahabalipuram, French Pondicherry/Puducherry and Danish Tranquebar.  We are following that route out of Chennai on the first  day of our South India Tour with all 11 travelers.

Our time in Chennai really began last night when we were very fortunate to attend a classical Bharata Natyam dance performance at the Madras Music Academy with a well-known dancer, Alarmel Valli.  She kept all of us sleep-deprived people mostly awake for 1.5 hours.  This was a first experience for many in the group of classical Karnatic music, with a superb flautist, violinist, and drum player accompanying the dance. 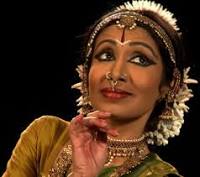 We arrive into Kanchipuram and alight by the great Ekambareshwara temple, one of the holy temples of Hinduism, where we descend into a flood of women in magnificent bright dorange and red saris.  We find out that we have arrived on a special day:  the first Sunday in the new year when women go to worship at a nearby temple which requires that they wear red on that day. 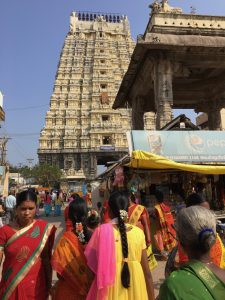 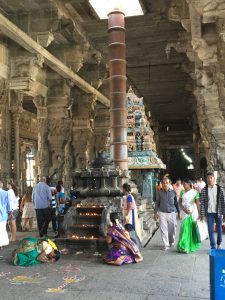 Large groups of women come to pray and dressed-up children respectfully accompany them as the women light butter lamps and pray to a Shiva lingam.  The long halls with carved granite pillars tell centuries of stories and priests wait by various small inner shrines to bless the devout with marks of kumkum on their forehead and to receive donations in exchange. 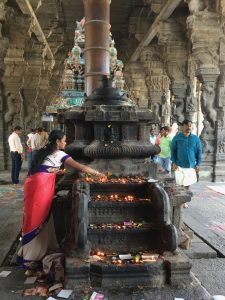 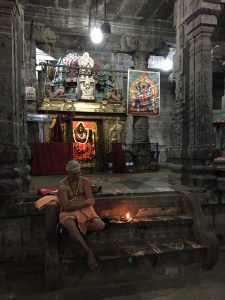 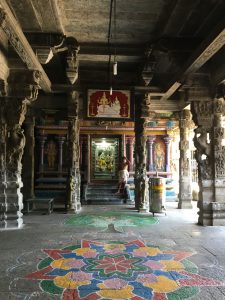 There is a great line to the inner sanctum and we are told on certain festival days, that line can extend for up to an 8 hours wait. 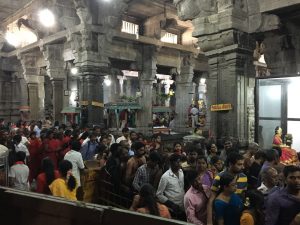 At the site of an old temple in Kanchipuram being preserved as an archeological treasure: 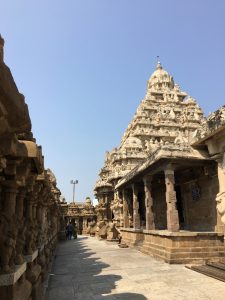 And now the silk connection, the most important business of Kanchipuram:   over 100 weavers work in one coop alone, sitting in their homes, weaving handloom silk sarees with classic gold borders, the kind that are purchased for weddings and handed down for generations.  A simple such saree can cost 20,000 rupees, with materials supplied by the coop at  cost of about 17,000 rupees, leaving the weaver with about 3000 rupees for 20 full 8-hour days of work:  about $48.

After visiting a few more sights in Kanchipuram, we head back to the coast and the great Unesco world heritage site of Mahabalipuram. 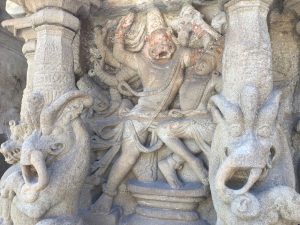 Here, once again, there are great numbers of women in red and orange saris and there is a carnival atmosphere right outside the entrance gate to the famous Shore Temple.  Many vendors have their wares on the ground or in small stalls, selling plastic toys, jewelry, shoes, snack food.  Nearby there is a live performance of student folk dances and music, part of a 2-week music festival showcasing the diversity of rural traditions around the country.  The loud speakers are at such high volume, I need to hold my ears walking by.  The Sunday crowds throng over the walls and archeological remains of this old temple which miraculously escaped the 2004 tsunami. We are told that the water swept out about 1.5 kilometer before the rising intide and during that time, local fisherman who had escaped to higher ground reported seeing 3 spires — leading to the discovery of the remains of 3 temples and the speculation that originally the great seaport was situated much further out in the Bay of Bengal. 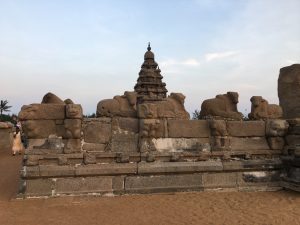 It is dark by the time we are at our hotel, right next to these holiday fairground, but most of us take the opportunity in the early morning to walk to the ocean’s edge, grey with the blooming signs of dawn.  We watch while great crowds of women with, once again, red and orange saris, as well as men, walk to the seaside and all take out their cell phones to take photos of the approaching dawn.  The beach is covered with litter, no one throws away their candy wrappers or ice cream sticks, their water bottles or napkins.  I long to organize the kids to invest one day picking up the trash on their beach and try to change the custom of their parents. 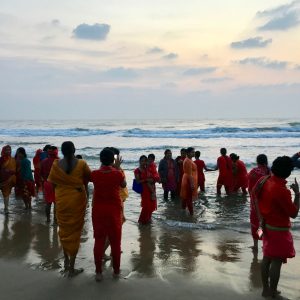 Our hotel is an interesting museum, in a former British military camp, with relics from as far afield as a Victoria station clock and the entrance gate of the British Madras Prison.  Our deluxe rooms are in quonset style round huts, filled with antique furniture and hand set mosaic floors, roomy and comfortable.  We are the only tourists there, together with one Indian family and we sit around with beers and pineapple juice relaxing before our dinner.   An exhausting but fulfilling day. 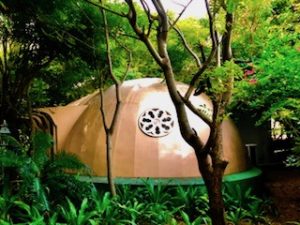 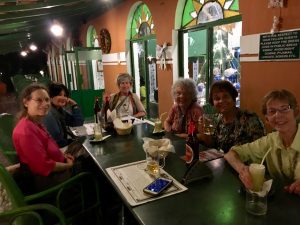