We rumble down the express highway to Agra in our tourist  bus through impenetrable fog.   Fortunately, there is now a divided highway and the risk is no longer of a head-on collision but crushing impact with an invisible vehicle to the front or side, including buses and large trucks.  Our driver is a brave soul who does not seem perturbed by the hazards.  The rest of us on the bus feign sleeping or simply cover our eyes.

Everyone in our small group is compatible and enjoying each other’s company.  We had to go through a long security line when we entered the Taj Mahal area, with men and women on separate lines to be screened and frisked.   We 8 women were through security fairly quickly thanks to our guide pushing us ahead but we had to wait quite a while for our single male to make it through the process. 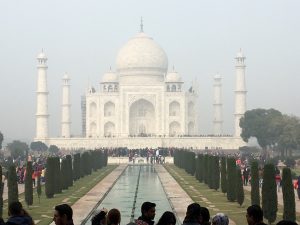 But, like a miracle, by the time we arrive at the gateway entrance to the view of the magnificent Taj Mahal, the fog has largely dissipated, leaving a misty haze which only enhances the experience.  It is said this building of all those in the world is beautiful in any weather and the light grey fog around it allows the magnificent structure to shine through and reveal its perfect form.  The problems are the crowds, not as exceptionally crowded today as last week when a small stampede occurred and the government threatened to limit access to the Taj to only 40,000 per day, but still creating a mass of pushing humanity under the glorious dome. 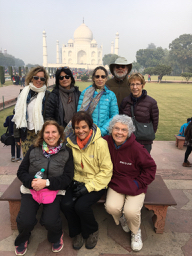 Our guide Amit for Agra I find troubling as he emphasizes his points by patting us on our backs and his mouth is rotting from use of red addictive beetle nut, common for many lower wage Indians but unusual for a guide who deals with tourists all day.  But he is knowledgable and helpful.

It is late by the time we leave the Taj and have lunch at a local cafe around the corner from our hotel but Amit pushes us to madly scramble to get to the Agra Fort before it closes at 5 pm.  As all the guards know him, this proves to be a blessing.  It is such a powerful building, built to withstand the enemy and the stamping of elephants while also conceived as a pleasure palace designed as a peaceful and luxurious boudoir for the king’s wives. 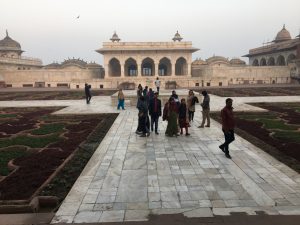 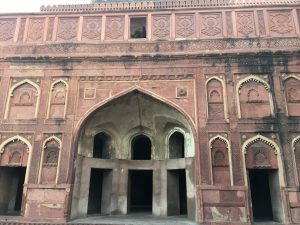 The climax of our North India tour was to see the Taj by full moon, only available on the two days before and after this lunar event each month.  Our tour company obtained these special limited tickets for us by standing on a line starting at 5 am the previous day.   But dense fog has again descended at nightfall and 6 out of 9 of us foolhardy tourists, knowing our efforts are in vain, still decide to sally forth into the mist and see what will happen.  What did occur was a mirthful 1.5 hours during which we took the bus to the Taj, went through security handled by a large number of military style personnel, had our passports checked, were required to stow all personal belongings in a locker, and were thoroughly body searched.   At the end of all this, the 6 of us, plus 4 Japanese tourists and 2 Indian tourists, stood by ourselves on the grand platform overlooking the expanse toward the Taj Mahal in pitch darkness and saw —- nothing at all.  A very grand nothing, knowing the Taj was just ahead of us.  I tapped the bespeckled Japanese young man in front of me on the shuttle bus on the way there and said “We are all crazy!)  And he said “Yes, we are crazy.  We can take off our glasses! “  It was well worth the cost of time and energy to laugh at ourselves and have the armed army security guards who tried to keep a straight face, laugh with us.

Fatehpur Sikri and the Baby Taj 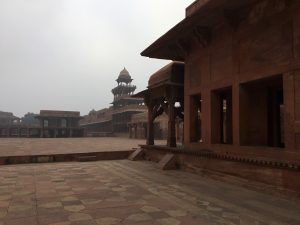 The City of Agra is a mess, dirty and chaotic, with new hotels recently built to service the many domestic and international tourists to its greatest shrine.  Whereas in the past it was mostly upper class Indians and foreign folk who came to visit, the rise of easier transportation and more available spending money has brought great numbers of visitors from all over India to delight in the beauty of Shah Jehan’s creation.  But far fewer venture slightly more afield to the great City of Fatehpur Sikri, built in the mid-1500’s as the emblem of Akbar’s powers to both create and destroy.  Courtyard after courtyard of red carved sandstone still proudly stand, amazingly intact and accessible.  And  at the heart is a small white marble shrine to a Muslim saint who finally blessed Akbar with a son. 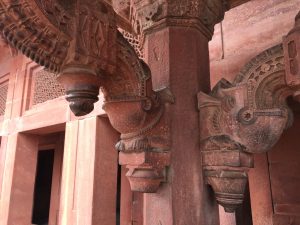 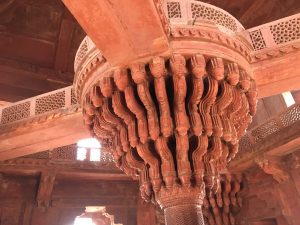 But most impressive is the mosque on one side of a very large courtyard once filled with the devout.  On another side is the tallest gateway in the world with a patio overlooking the city.  This is open to the public as it is still very much a living place of worship.  Inside under the intricately designed dome are mats for praying and an electric clock.    It is one of the most exceptional mosques I have been in as it is both an ornamented ancient monument and alive with current use. 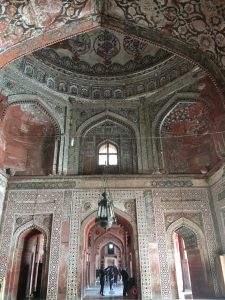 The road to and from Fatehpur Sikri takes us through a more rural landscape.  in addition to the cows, donkeys and horse carts, and even one camel, we see fields of mustard and potato strung together with small towns serving the farmers needs.  Our guide stops to show us where people are making cow dung patties for fuel and for home construction as well.

The Baby Taj, officially the Tomb of I’timād-ud-Daulah, is a smaller quiet space of beauty, a prologue to the Taj Mahal.  No huge security to enter, less people and beautiful yellow and white inlay marble monument on a plinth overlooking the river. 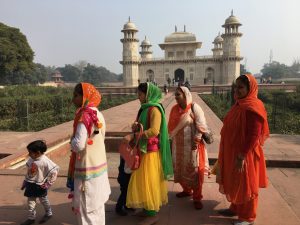 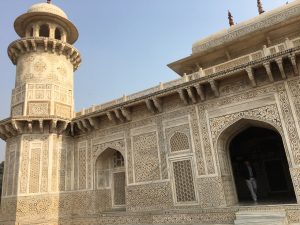 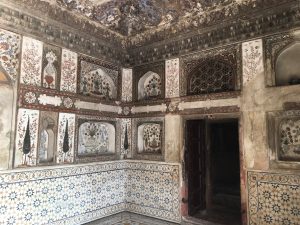 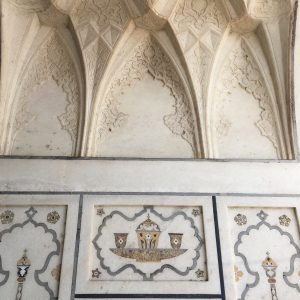 We are driving back to Delhi and the pollution gets stronger the nearer we get to the city.  We have made a rest stop at a food court which is a glory:  a counter for delicious North Indian food and another for South Indian food.

In Delhi we head directly for the Gurudwara Bangla Sahib, the largest Sikh temple in Delhi and one of the most glorious Sikh places of worship in the world founded in the mid-1700’s.   Taking off shoes and socks, we bathe our feet and enter the temple where the holy book of Sikhism sits in glory surrounded on 4 sides by the devout as live drums, singing and music fills the space.   Marigolds decorate the central altar space and there is a sense of peace as we walk twice around this room to take in all the sights and sounds of reverberating piety. 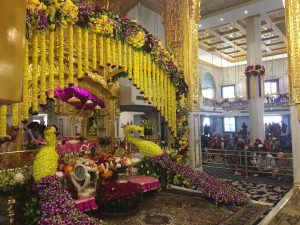 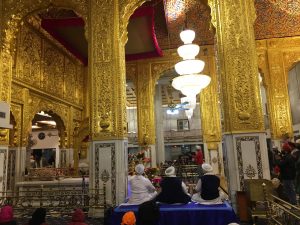 Outside it is dark now and there are strings of lights that surround the temple and the very large pool of water used over the centuries for bathing and healing.  We pass by the groups of people waiting for holy water and holy food, known as prasad.   All the men are turbaned with beards, as required by the religion and women must have their heads covered.  At the end we venture to the kitchen and dining area where 50,000 people are fed without charge every day, and more on special holidays.   Everyone who works here is a volunteer, cooking the thousands of chapattis, preparing the huge vats of lentils and vegetables, serving everyone on metal place who come in large groups, eat ad then relinquish their seats for another.  I saw a women asking for soup in a plastic bag to take home.  It is a true example of serving those with need and is beautiful to behold. 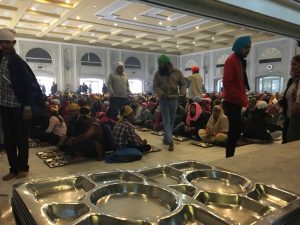 Back to our hotel we prepare for our flight tomorrow to Chennai.