There could hardly be a more out of context experience than visiting the Matri Mandir at Auroville, the intentional community established by the spiritual head of the Sri Aurobindo Ashram in Pondicherry, now known as Puducherry.   Pondicherry was a french colony, going back and forth between Britain and French from the 1700’s, and remained officially in french possession until 1963 – only 2 years before I first visited India.   So it is not surprising that the India mystic, Sri Aurobindo, chose it for settlement when he returned from Europe with his French spiritual colleague, known as The Mother.  Charles and I visited Pondicherry a number of times in 1969 and had  “darshan” or a brief “sighting ‘ with the Mother during that time and found her utterly striking in presence and understood why others would follow her orders. 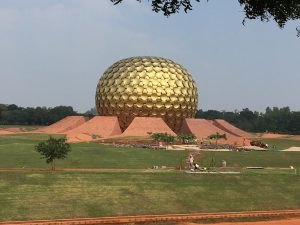 Among those directions was the creation of a utopian community with people from all over the world joined in their common search for a  universal consciousness.   Toward that end, large barren acreage was purchased in the early 1960’s and Charles and I visited the very initial beginnings in 1970.   My daughter and I visited the same site in 1995 when a number of people were living and working there and were shown the first phase of construction of the large mediation orb in the heart of the community.  At that time, i have the distinct impressions of young “hippies’ living out an easy lifestyle in the wilds.

Now the orb is completed, with side gardens still in process, and it stands as a great golden globe on beautifully landscaped grounds — but only  2700 of the envisioned 50,000 people live there.  We were all uneasy with the poverty we saw driving into the grounds, the very sophisticated presentation of their project at the visitors center, and the huge mental jump from a philosophy of individual non-materialism to this very expensive and high-tech building.

After a lunch at the Cafe des Fleurs inside the colonial center of Pondichery, we visited the central Ashram to pay respects to the burial sites of Sri Aurobindo and the Mother.  I do always feel a sense of contentment in this small piece of the world, a capsule from another time, a small group of building mixing French colonial architecture with the practicalities of life in a tropical climate.  Many of the old buildings are badly in need of repair although those owned by the Ashram seem better maintained.  But the many businesses and offices of Ashram members from Europe in the 1960’s are now gone,  presumably to Auroville, and a sense of a purposeful community working together has disintegrated as well. 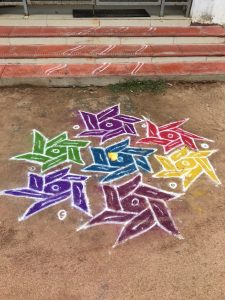 The next stop on the road of the silk merchants:  the former Danish colony of Tranquebar (Tharangambadi),  created as a trading post but famous for the strength of its missionaries  starting in the 1700’s.   The remains of the Danish influence in this small town within the protected fort area is mainly in the churches, especially New Jerusalem whose leader was the first to translate the Bible into Tamil and to print it on a printing press.   Where there is one church, there is almost always another and here the church across the street is the Zion Church, the first Protestant church in India, but which originally refused native converts. 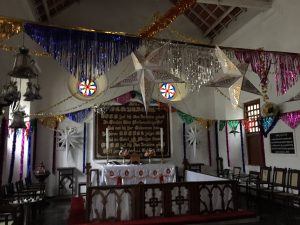 The old, red-walled fort, which glowed in the setting sun when we arrived, contains the preserved warehouse and living areas of the Danish military and now also has a museum.  This museum is a curator’s nightmare, rotting wood, water stained display boards, broken stained glass, very poor lighting, and damp coming in from the sea which faces the fort.  It does provide us some history and context for what we are seeing, though, and some of the collections are strange to say the least:  a whale bone, broken shards of Chinese plates that washed ashore, a few danish artifacts. 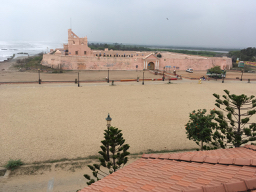 The post office was new and spotless and efficient.  Our group coming to buy stamps was probably their largest business of the day — if not the week.   Sign in Post Office: 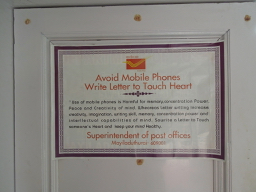 This is a very small town and the people follow old traditions such as putting our fresh designs in front of their homes every day. 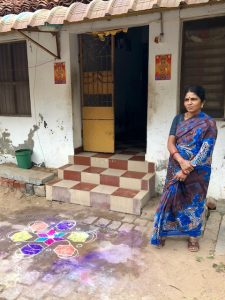 Our hotel was a beautifully restored old mansion with antique furniture and a sense of a place forgotten by the 21st century.   It was delightful sitting out on the verandah in the evening and having breakfast by the pool in the morning time, with the sound of the waves in front of us.  Very large ceilings and windows brought in the sea breeze from what is promoted as an “ozone rich beach”. 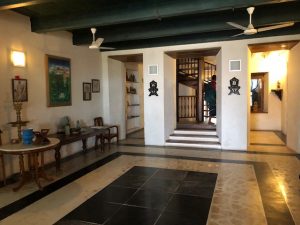 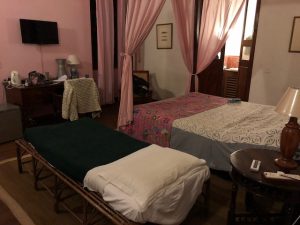 We were able to walk up the winding wooden staircase in our mansion to the rooftop from where there was a magnificent view of the trees and small homes that make up this community.  I assume there are many Christians, given the old and well-maintained churches on their main street.  But you would not know it from the freshly-created rice flour designs on the ground in from of the doorways and the loud noise coming from the nearby Hindu temple. 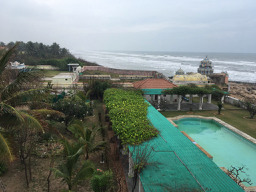 The tsunami of 2004 hit this area of the coast hard — over 600 people died here and the water came up to the first floor where we are staying.   The fort survived but the churches were also damaged and have since been restored.  There is a memorial to the victims and it makes one wary looking to the now calm sea. 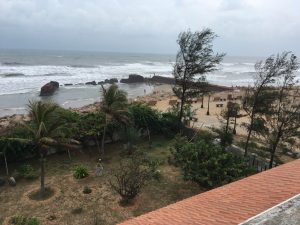 The people here, from managers to the lowliest workers, are all very open, friendly, polite and gentle.  The young girls say hello to us and want to shake our hands.  Bill and I walk into the courtyard of a school (St. Joseph’s primary school) and see all the children in their uniforms standing nearly in groups and then silently walking toward their classrooms.  A few minutes later we heard one of the students broadcasting the Indian national anthem to start the day. 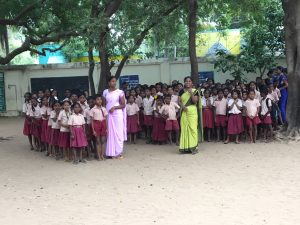 Whereas in North India, I always feel on my guard for the next imposition from somebodyt somewhere, here I can relax and appreciate connections made with local community members. 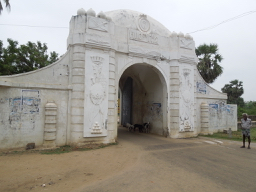 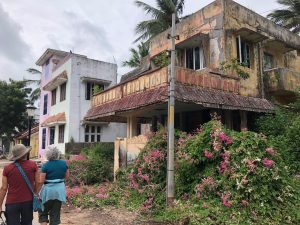 And now the roosters are singing their morning song and time to for another incredible South Indian breakfast.