It is 6:30 am as my plane rises over the northern hills of Quito heading south toward the old city of Cuenca.   In this country of perpetual 12-hour days, the sun is shining from the East horizon casting sharply contrasting shadows in curved stripes over the many hills and valleys below me.  I can clearly see the long stretch of Quito from North to South, its buildings concentrated in the valleys and climbing up the hillsides.  And then we are flying above the string of volcanoes on either side of the plane, with an occasional ice white peak level with my window.  It is a beautiful sight.

The airport of Cuenca is right in the middle of the City as development has surrounded it over time and there is no where else to go in this ancient valley which was ruled by the Incas in the 1400’s until the Spanish conquistadores took over.  My host and guide, Diego, meets me at 7:30 am and I am swept up for a full day of sightseeing in this scenic city.  It is interesting to be in the historic center when everything is still closed and shuttered and then see it slowly come to life over the course of a few hours.  The main street, Calle Bolivar, stretches from one end of the preserved city to the other and my magnificent hotel, the Mansion Alcazar, is right in the middle, 2 blocks from the main cathedral and square. 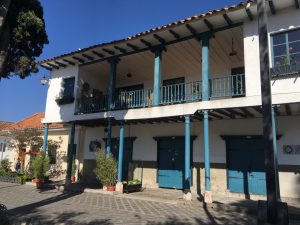 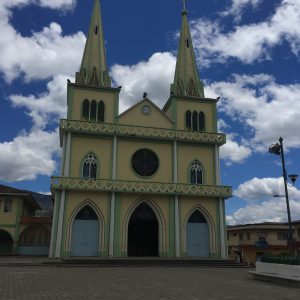 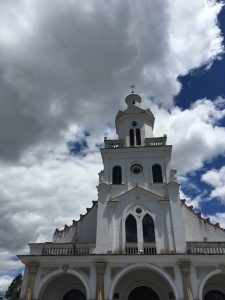 Another church up the hill

The Mansion Alcazar is a former mansion in the grand colonial style, filled with antiques, a sunken center courtyard with a covered glass canopy surrounded by rooms, on two levels.  I have a queen-size room, coronet above my bed, beautiful furnishings and altogether luxurious. 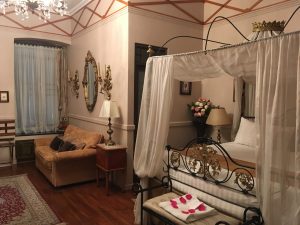 My Room at Mansion Alcazar 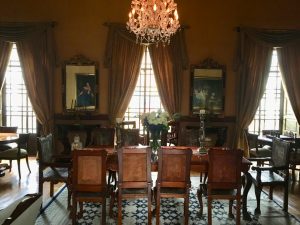 I have breakfast with Diego before walking around the old city and then heading up into the hills on this warm and sunny day. 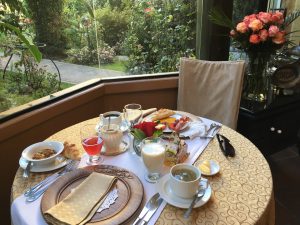 Our breakfast at Mansion Alcazar

The old part of the city is a compact area, with clothing shops and restaurants and two story colonial  buildings, some beautifully restored and owned by the City as no one else has enough resources to get the job done correctly. 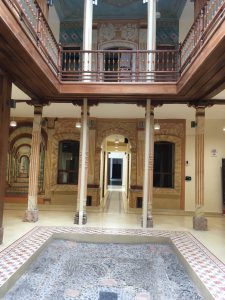 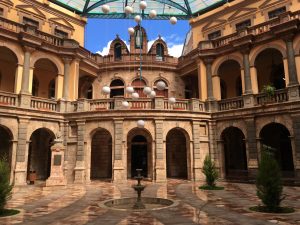 There are a number of Catholic churches along the main road, including the New Cathedral with blue and white domes behind an imposing front which resembles Notre Dame.  Although there is a large new part of the city, with an increasing number of new residences being built in part due to the influx of 10,000 expats from Canada and the U.S. over the last decade, the old city is still a central shopping hub and social focus.  We ate lunch together on the main square at a traditional restaurant which was crowded with locals.  I had another unknown fruit drink tasting like a cross between a guava and passion fruit. 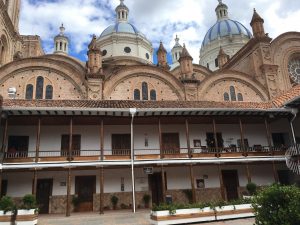 Side view of renovated courtyard and New Cathedral’s domes

The food market is always stimulating in every country — this one is no exception with piles of fruit, many of which I cannot identify, and country women sitting ready to measure and sell.  I loved the piles of numerous kinds of potatoes.  We avoided the lanes filled with the hanging meat. 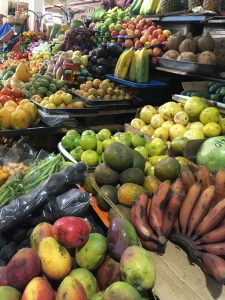 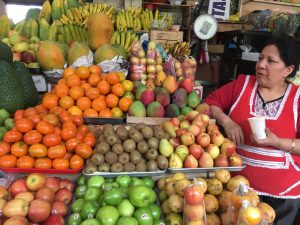 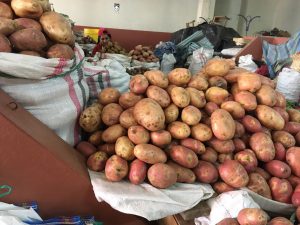 While the weather is still good, we head up into the hills to visit various local indigenous enterprises, which includes a large orchid form, a street of blacksmiths, a town based on silver filagree work, and one of the few remaining ikat dyers and weavers.  Diego is a wonderful and informative companion who makes my time in Cuenca very worthwhile. 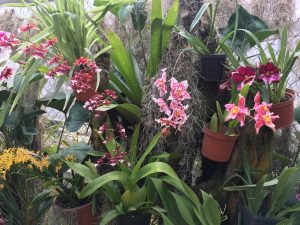 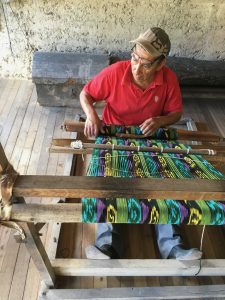 My room at the hotel is so gorgeous it is a pleasure to return and relax a bit, take a little nap, and then get ready to have appetizers with Sandra, the hotel manager, Diego, and Christian, who is the sales manager of this and its two sister hotels.   This turns into more than appetizers as it is sushi night in the hotel and Sandra orders special food for me, including vegan sushi roll, grilled vegetables, empanadas with soy meat, and home made blackberry sorbet.  Fabulous.  The tourist industry in Ecuador has declined recently and this hotel and my new friends are anxious to get the word out about Cuenca, which I will try do as I so genuinely am captivated by the spirit of Ecuador. 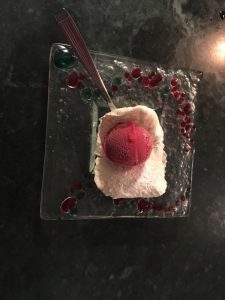 I need a step stool to get into my large fluffy bed with a hot water bottle placed at the foot.  In the morning, I head off with my new guide, Melton, to El Cajas National Park, a large expanse of high altitude land, barren about 12000 feet and heavily wooded below.  The sky is grey and overcast, not like yesterday, and we take a 2.5 mile hike around a lake, more than half of which is in an intact virgin forest of native plants. 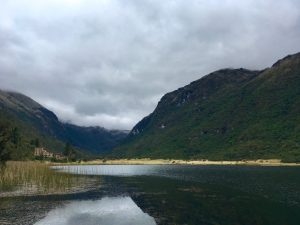 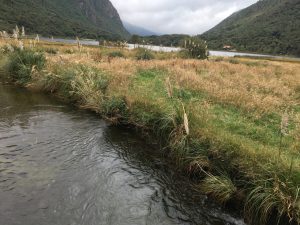 Melton knows birds and we see quite a few in the early morning, including 4 magnificent turquoise jays and other denizens of this altitude. 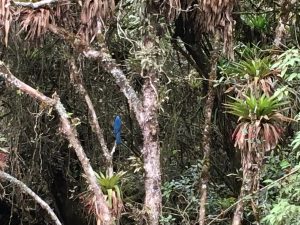 We head up to the highest point on this road at 13,600 feet.  This shortcut to Guayaquil was not completed until 1980.  Trucks need to take the longer Pan American Highway. 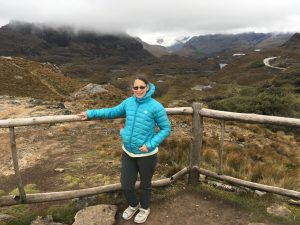 There is a sprinkling of rain and it is very overcast now. At that elevation, it is very cold.   Melton points out the two trails tourist usually take, the “easy” 1.5 hour one and the “more difficult” 3-4 hour one — although at 14000 feet, nothing is easy.  I am too cold to try either walk and we head down the hill, with rain splattering our windshield, and my deep wish that the brakes on Melton’s car hold out.

Above the hiking paths at El Cajas National Park at 13000 feet.

The warm sunny day yesterday is an interesting contrast to the overcast coolness of today.  But the surrounding mountains are beautiful in any weather.  Diego and his wife take me out to lunch at a nearby village outside town which has thermal hot springs.  The food here has been a challenge for me as a vegan although everyone has been so very helpful to accommodate me.  My lack of Spanish does not help.  At the restaurant of a spa hotel, I am able to get the staple of this area, vegan style, which is quinoa and potato soup, made without the traditional cheese.  I am then left to spend the afternoon at the hot baths before  returning to the airport.  A good way to spend a cool afternoon and end my time in this truly memorable city. 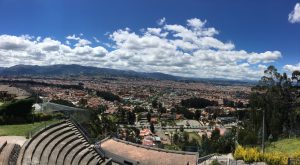