I have a day to myself in Quito before I join my tour group and I decide to spend it walking around the old part of town.  One of the things that is fascinating to me about this country is that there are large groups of people of all ages that are as sophisticated and integrated into the 21st century world as any Americans or Europeans while at the same time there are large groups of people that live as they did 100 years ago or more.   Some of the latter group still dress in the style of their unique community and can be easily distinguished from each other, with different hat styles, wrap styles, skirt styles.  Both of these groups can be seen in old Quito on a weekend.

Saturday and Sunday are holidays and the old town was filled with local people coming in to visit the churches and shop in the crowded pop-up marketplaces along the side of the cobbled streets.  School starts next week so perhaps parents are buying provisions for their children.  Certainly there were a lot of families indulging in ice cream from sidewalk sellers or sweet cream filled cakes. 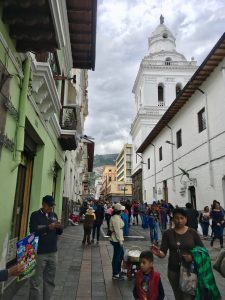 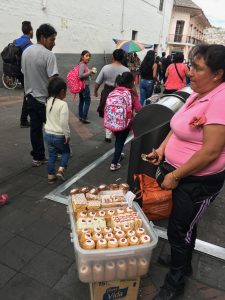 The side buildings on the main squares are more from the colonial period of the early 1800’s but churches still exist from the 1500’s, with gold encrusted interiors and both baroque and gothic design.

Independence Square or the Plaza Grande 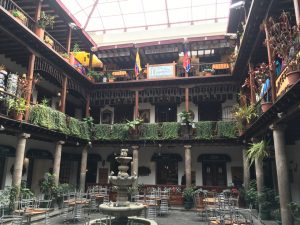 The Archbishops palace now rented out for commerce 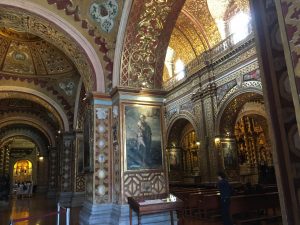 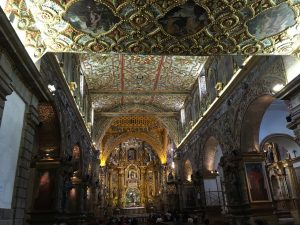 There are some beautiful remodeled buildings on street corners from the colonial period. 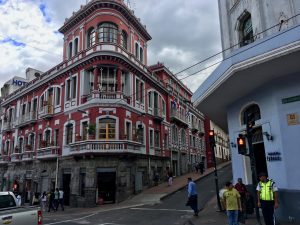 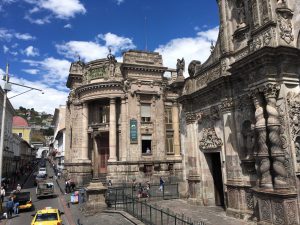 I went to 4 museums, all of which were very well done.  The most memorable was a very in-your-face feminist exhibit of a group of women artists chosen from various countries, held in the municipal building right next to the Presidential Palace in the Plaza Grande. 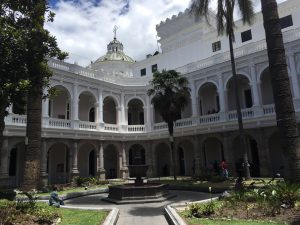 The Municipal Building Courtyard in which was the Feminist exhibit

If anyone has a thought that Ecuador might be prudish in its art displays, this exhibit would counter that idea.  Although I could not read much about the pieces or idea behind the exhibit, called “La Intimidad Es Politica” which perhaps means “Intimacy is Politics” as all signs were only in Spanish, the large photos of nude gender-neutral people from an artist from South Africa, the full wall size photo of 2 men in bed together (which it appears was hung outdoors in the square at one point and the artist included in the exhibit newspaper articles questioning or perhaps condemning this display), an art event in the middle of Cairo in which a large group of people walked on all fours across a street and the artist videotaped the arguments and violent responses of some of the street audience who happened by, the video of the Guerrilla Girls of New York, attacking the low percentage of women artists in museums and galleries, or the room with all 4 walls covered with photographs of the backs of women with their heads covered by saris or burkas or shawls —- it was a truly impressive show.  I saw a family come in with small kids not knowing what the exhibit was about and quickly escort everyone out.  It is not what I would have expected in the middle of the historical center of Quito, Ecuador. 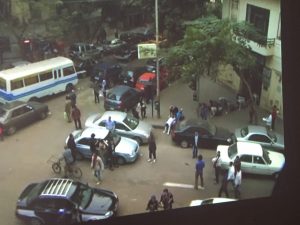 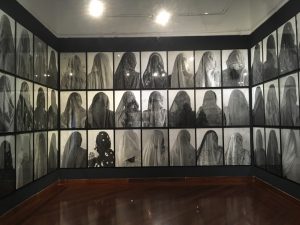 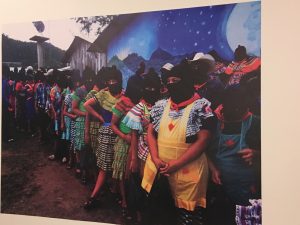 Walking around the area, with shops selling goods from shoes to floor coverings, I ambled up a quiet side street with a policeman on either corner directing traffic along a main street filled with families, to see at least 3 women in doorways plying the oldest trade on earth.  There was nothing discrete about this. 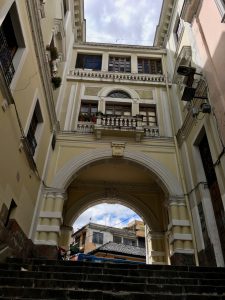 And now a detour on a subject I always mention when I am blogging about a new country — the restrooms.  This country has the cleanest restrooms of anywhere I have ever been — certainly better than in the U.S.   There were immaculate public restrooms even in the artisans markets which charged $0.15 (or $0.35 if you wanted toilet paper), and public restrooms in parks that were clean and well maintained, and even a public restroom somewhere along my journeys in a supermarket store that was very good.  It must have seeped in through education to the people of Ecuador that nothing less is tolerated.

Another favorite topic of mine is cab drivers — as some of you know, I have a minor phobia of being taken advantage of by cabbies in foreign countries.  The cab drivers in Quito use a meter or tell you in advance of the reasonable charge (I negotiated down a requested $5 to $3 which I was told in advance was the reasonable cost only to feel guilty when the ride was long and went sharply uphill for quite a while).  The driver also seemed happy to try to talk to me (we of course couldn’t get very far with my 4 lessons of Spanish).   Most rides in Quito are only $2-3 except for the very far-out airport which is $20. 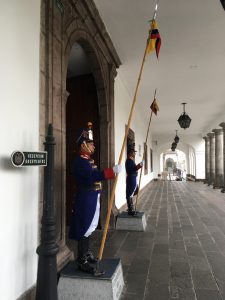 Guards at the Presidents Palace

I met my tour group this morning — there are only 5 travel agents (all women, from New Jersey, Philadelphia, Toronto, Dallas and me) plus 3 representatives of the travel companies arranging this tour for us (from Seattle, Dallas and the local agent from Quito).  We spent part of the day in the old town where I heard additional history and went to new places where I had not been before.  In the choir loft of the Church of San Francisco, we were able to look down on the on-going mass being held, with almost filled pews — despite our guide telling us that most people had given up on religion except for special holidays.  The service included organ music and singing with some hand-clapping, an unexpected event for me.

We also traveled outside Quito to the “Middle of the World”, a tourist must, the equatorial line at latitude 0’0” and learned the history and science used by the early European expeditions which set the line we use today.  The advent of GPS has proven this monument a few hundred yards off but what is a few hundred yards among friends? 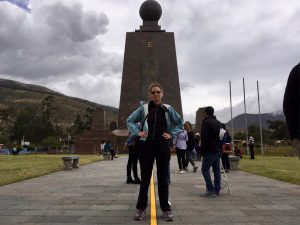 Tomorrow we head for the Cloud Forest in our comfortable minivan and I may not have internet for a few days.