Samarkand — the name evokes a very exotic place of great beauty with markets rich with spices and covered bazaars.    The reality both matches this legend and at the same time is altogether a different place.   The small city itself exists around the 15th century remains of some of the most magnificent structures ever built,  created by the renowned Amir Temur, also known in the West as Tamerlane, and his descendants including his grandson the astronomer and scientist Ulugbek.   The sites that contain these preserved buildings, great soaring portals leading into courtyards with mosques and mausoleums, are incomparable in the world. 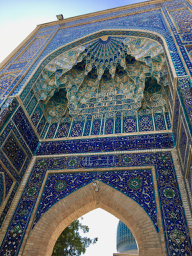 Although the Soviet Union has not left behind a great record for aesthetic sensitivity, the Soviet archeologists and conservators did a spectacular job, almost a super-human effort, to bring these ancient edifices back from rubble to the striking state in which they can be seen today, assisted by Uzbekistan’s further conservation efforts since independence in 1991.   The buildings are covered with an incredible spectrum of blue and turquoise majolica tiles, ceramic tiles, painted tiles and gilded cupolas, with some green, yellow and white decorative additions.  Each domed mosque has a similar style but is uniquely different in its ornamentation. 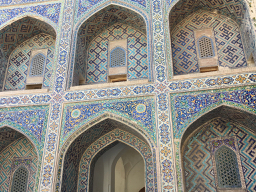 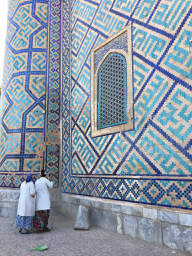 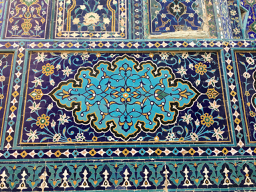 The main site is the Registan, containing 3 main buildings, which becomes a theater of lights in the evening when changing laser lights play over the structures. 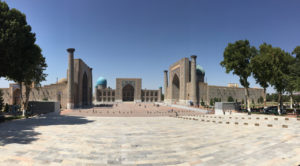 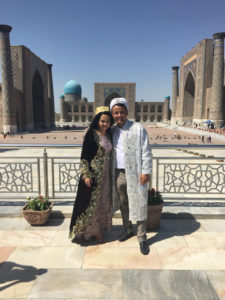 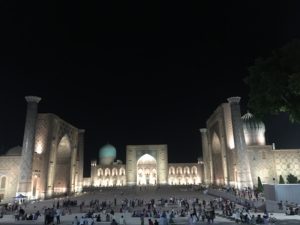 Registan at night with white lighting 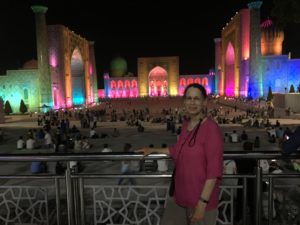 At night with the colored lights

The Shah-i-Zinda is a series of mausoleums, some created for the women in the Emirs lives, each touchingly beautiful, of various ages and in various stage of preservations, similar but each different.  From seeing these creations, it is easy to understand where the idea of building the Tah Mahal came from, as Shah Jahan was a descendant of this dynasty. 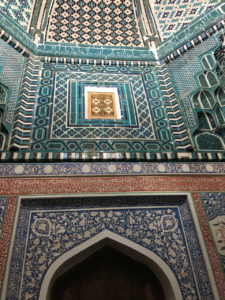 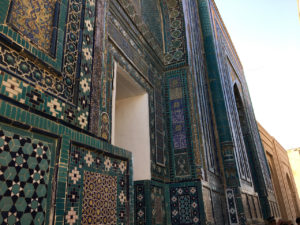 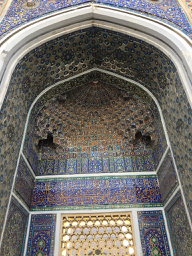 Some various inside cupolas: 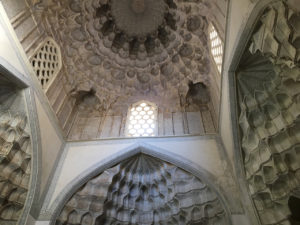 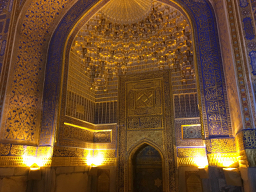 The Tajikistan President came to visit when we were there so that the city was put into high-level clean up mode.  We even saw people cutting and fitting pieces of green astroturf to replace some sidewalk dirt near where, I assume, the leaders would have lunch.  The result for us was that all the main street were closed off with heavy police presence and our tour bus could not get through to our hotel.  So Judy and I headed out on our own in the morning to the Russian Orthodox Church and then through a part of the city which clutched at my heart:  old Russian Tsarist-time buildings which comprise the main shopping street and the nearby neighborhood.   Small one and two story wooden buildings on a quiet green street where you could imagine carriages and horses going by in the past. 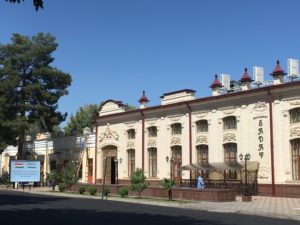 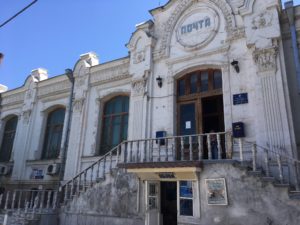 There we visited a museum in a great mansion donated by its Jewish owner to create a museum of Jewish History in Samarkand.  We were the only visitors and the museum was opened for us with photographs of an earlier way of life.

In the study, now a museum 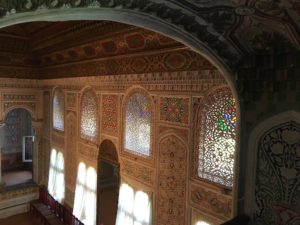 Imperial Russia Insignia with Star of David on wall

A group of us later walked across town, around the police barricades, through the local neighborhoods, to the Bibi Khaym mosque.  The government surrounded this monument area with a walled new street lined with tourist shops — but we found the hidden gate into the old part of town.   Expecting a lively local scene, we were met instead with very quiet narrow streets with walled buildings on each side and very few people outside and almost no shops, until we did run into a loud wedding party with the bride and groom in their white Mercedes (rented for the occasion) and their friends out to celebrate. 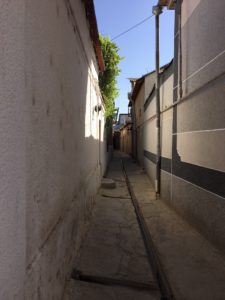 We stopped by a very old mosque with beautiful painted ceiling in its outside portico and then to the still working Gumgaz Synagogue,  attended by some of the remaining 200 Jews in the area.  The guardian showed us the cupboards filled with ancient crumbling tomes and the prayer books currently used, in Russian and English, donated by the Lubavicther Rebbe from Brooklyn with his photo on the front piece. 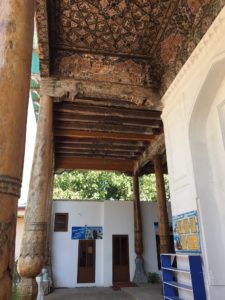 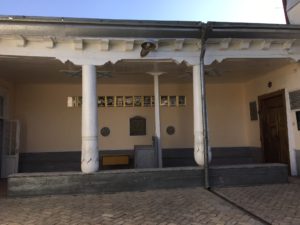 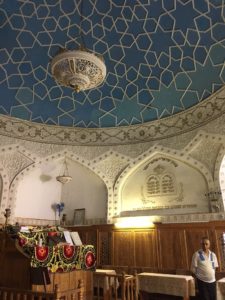 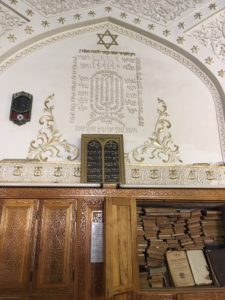 It has been very hot.  In the evening we were taken to a small paper making enterprise outside of town where we were able to sit next to flowing water and have a splendid meal, the best of this journey, in a peaceful and beautiful place.   I walked 20 kilometers or about 12.5 miles today in at least 90 degree heat.   Four of our group was very ill today from food and had to spend their time at the hotel, unfortunately. 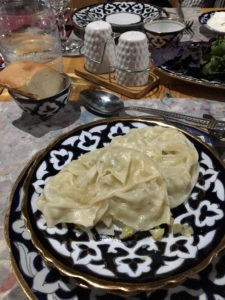 Our  next stop —Bukhara.