On the road to Bukhara: from our bus I see block walls and tin-roofed concrete houses with poplar and fruit trees.  An ancient tractor on the road as well as the ubiquitous small white Chevrolets, a product of a joint venture with Detroit, bringing auto manufacturing to this country.  Some donkeys, a bicyclist and a large field which has been turned over and is ready for the next years planting.  Older men with the common black skullcaps with white embroidery sit talking outside homes.  A gas station and a large soviet looking building.  A car is stopped and the police are giving someone a ticket. 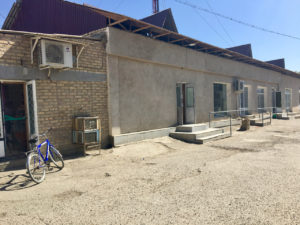 New and old shop in backstreet of Bukhara

Three camels sit on the side of the road and we are told there are farms in the area raising both bactrian and dromedary camels.  They are raised for their milk which our guide says is “useful” for health.   Some in our group tried the dried fermented milk balls which are sold everywhere, mostly cows and some camel, and were not enthusiastic about the taste. 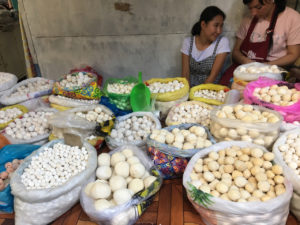 Whereas Samarkand is a city that has grown around its splendid monuments, Bukhara has more of a split personality: there is both a new town, displaying rows of modern shops, and the old historic area developed completely for tourists, with hotels, restaurants, and lined with stalls selling local hats, clothes, scarves, metalworking and paintings designed for visitors.   The monuments are older and more subtle in coloring then their sisters in Samarkand but impressive in their design, especially the large ornate sand-colored brick towers still standing intact, despite the ravages of Ghenghis Khan and the many centuries that followed. 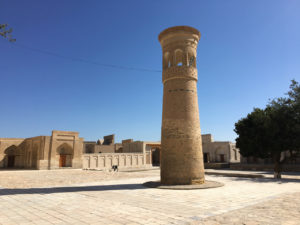 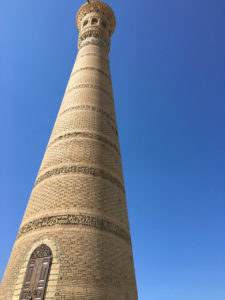 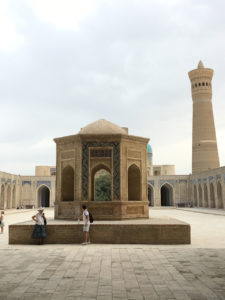 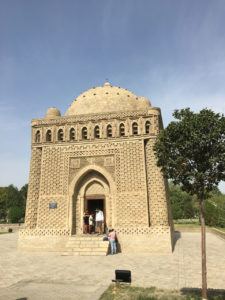 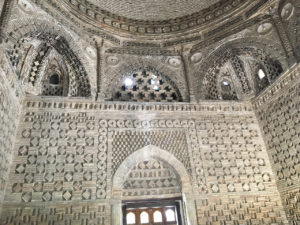 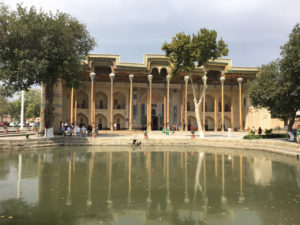 We visit the summer palace of the last Khan before Soviet rule took over as well as what remains of the great fortress, known as the Arc, which played a central part in the city’s history. 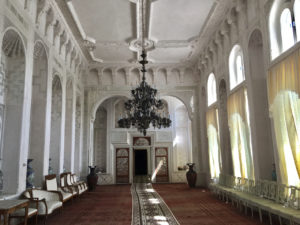 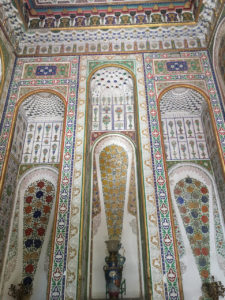 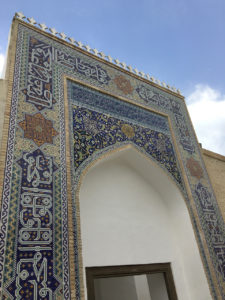 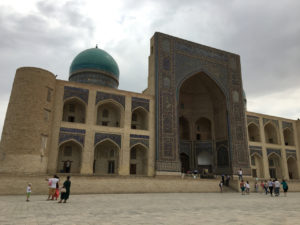 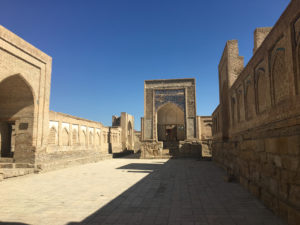 Walking just a few blocks away from the developed center, Judy and I find ourselves in a neighborhood of narrow broken up streets and concrete houses, some brand new and some crumbling from time.  We turn a corner and find an old traditional religious building, closed up and unusable, and on the next street we see buried between other buildings, an ancient crumbling wall and entryway. 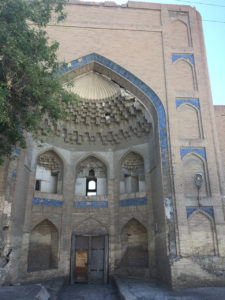 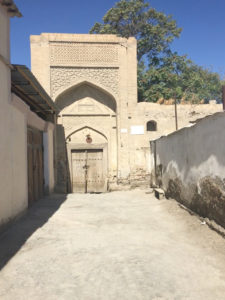 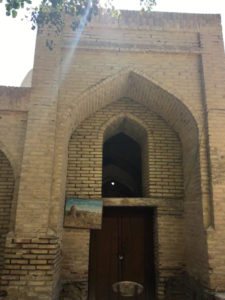 We visit the former home of a rich merchant, now in disrepair, with displays including the painful history of the local Soviet gulags for the undesirable.  Walking on the quiet empty streets and watching the local life is a pleasure. 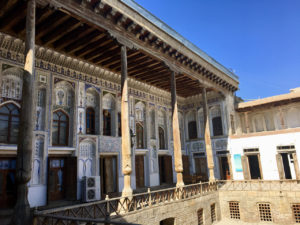 The Chor Minor (Four Minarets) modeled after the Char Minar in Hyderabad which a Bukhara trader once visited. 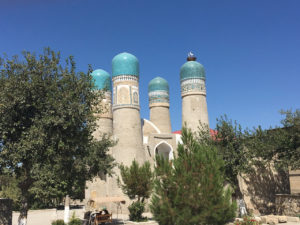 A side trip to G’ijduvon took us to the 7th generation of ceramists who still annually collect the herbs necessary for the glaze on their natural colored pottery.  And a delicious home cooked meal followed. 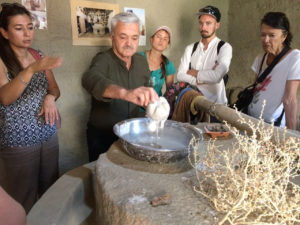 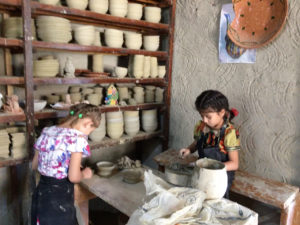 The next generation of ceramatists 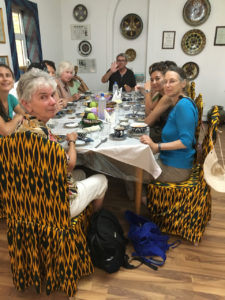 At lunch at the ceramatist’s home

The people here seem pleasant, gentle and friendly, I feel completely secure walking around by myself.  Even the shop owners do not importune you along the way but wait until you approach them and ask for prices of their goods.  Sometimes it is even hard to find the shop owner who is off somewhere and expects their neighbor to watch over their business. 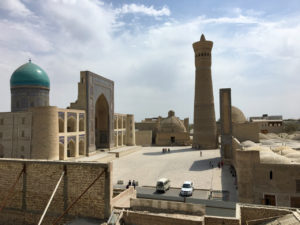 View from our lunch restaurant

The Naqshbandi is a major Sunni spiritual order of Sufism which emanated from Bukhara and Judy and I went off by ourselves to see their main site outside the city, a quiet peaceful place where devotees sat and chanted.  A peach seller was selling his wares on the side and when we tried to buy two, he smiled sweetly at us and indicated they were a gift.   The group belief from the founder is “God in the heart, work in the hands” – a transition from the tradition of Sufi beggars to homeowners who became productive parts of the community. 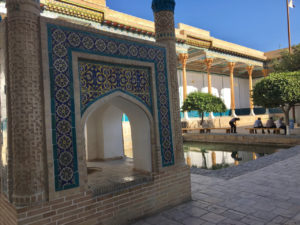 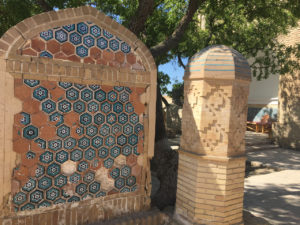 Although many woman wear long lose gowns,  we also see women in sleeveless blouses and pants and the majority have uncovered heads.   We hear from our guide, who is divorced with two children, how exceptionally difficult it is for single women in this world, with little chance to remarry and without recourse for child support.  Many men have “second wives” on the side and abused women have few options.  The cost of marrying off daughters is high so, once again, people want male children. 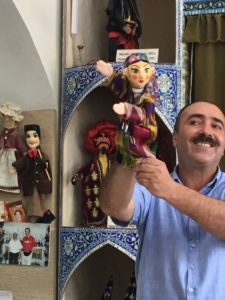 A puppet maker displaying his wares

Bukhara was the center of a very large community of Jews for many centuries, who supplied the artisans who created some of the finer decorations of the area.  Now there are only about 200 left and, when I visited one of the two working synagogues, I was told (conversing with the man in charge in Russian) only about 20 people regularly attend services.  I noticed the calendar on the wall listing the Yahrzeit of various men and women and then noticed it was published by the Community of Bukharan Jews in Fresh Meadows, New York — who must also help support the synagogue. 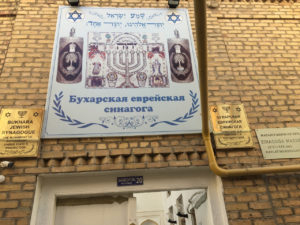 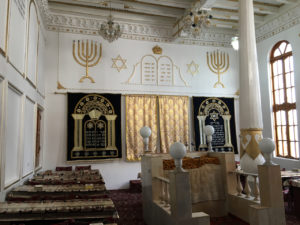 As we head toward Tashkent and our final day on our bullet train, I ponder the history of Uzbekistan: how it reached the level of development it is now in, with clean cities and many educated people.  Whereas plastic refuse is becoming a serious problem in Kyrgyzstan, Uzbekistan has trash bins everywhere and is exceptionally clean.  We have heard how great numbers of unemployed men here move elsewhere for work, especially to Moscow, sometimes leaving behind women to whom they are engaged to wait for someone who never returns.   And I think about India, attached so closely historically in so many ways, with cities in such greater chaos.   Both Kyrgyzstan and Uzbekistan experienced Sovietization over 70 years, a very heavy hand controlling its destiny, yet the former has retained its laid back country ways, perhaps because it had less to offer its conquerors, while the latter became more industrialized and commercial. 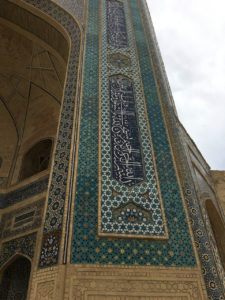 I am glad to have visited and tasted both an ancient way of life in Kyrgyzstan and had a glimpse into the post-Soviet development of the more industrialized world of Uzbekistan.  We have seen some of the great sights along this part of the Silk Road and I understand for the first time how greatly world history was changed by the development of sea trade, disrupting the development of these land-locked countries.