Once we are through a pushing shoving crowd of people at the immigration post, we are in Uzbekistan – a very different world than Kyrgyzstan which has surprised all of us.  Our first stop in Andijon gives us an initial exposure to this new culture: much more urban and Europeanized in taste, people in a hurry, impatient drivers.  But the people are curious and unbelievably friendly.  Everyone wants to have a picture with us. 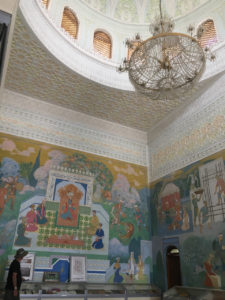 We are in a park while we wait for our train so that we see around us the local population enjoying a hot summer day with their families. Food stands, children’s rides which look like they were built in the 1950’s and never maintained, and an overhead aerial tramway which goes 20 minutes uphill to a rest stop. Our groups decision to try this ascent was probably not the safest decision as these suspended cars move slowly on cables that creak and groan as if grease was a foreign element to them, the metal of the cars is corroded to such an extent that you can see the ground underneath and I wondered if the floor could fall out to the ground far below.  The cars did not stop for on or off loading so that some local bullies were hired to push people in and pull people out of the cars (especially older looking women, it seems) resulting in bruises for a number of us. 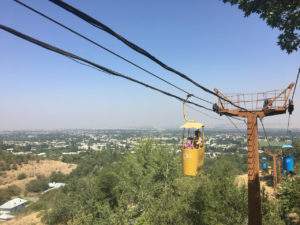 Our aerial tram ride in Andijon

But I did see some interesting sights along the way, including some overhead views of construction and reconstruction of buildings. 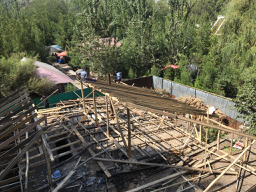 On the way down I look at each face as it passes in the opposite direction and realize that the Uzbek population looks very different from the Kyrgyzstanis — here people look very Aryan and Iranian, dark haired and pale skinned, with only some of the Asian Tatar influence that so dominates its Eastern neighbor. We later learn that Uzbekistan is a true mixture of ethnic cultures as at some point during WWII Stalin decided to round up and deport to his Tashkent outpost (on 4 days notice) any ethnic group living near Soviet borders he thought (rationally or irrationally) might be sympathetic to Germany. This resulted, for example, in a large number of Koreans ending up here as well as Chechens and those from the Caucasus who have all completely assimilated and intermarried into the society. 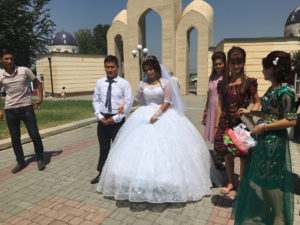 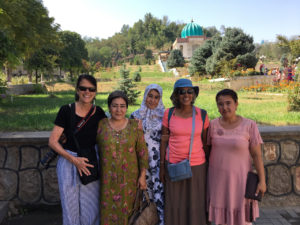 Janet and Claudia at the hilltop in Andijon Park

Our train to Tashkent was a surprise — a luxurious modern train which even our German comrades said was cleaner and nicer than most of their trains. And this was just a local train although we did end up in “business class” as our own allotted car was out of service. Our brilliant guide, Shirin, was shocked to learn that we do not have in the U.S. any high speed trains and we felt embarrassed for ourselves as well. 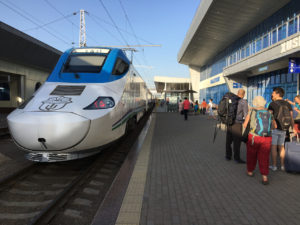 The bullet train from Tashkent to Samarkand

Moving from Osh in Kyrgyzstan to Tashkent in Uzbekistan is like — how can I compare — moving from Fresno to Los Angeles. Tashkent is quite modern although still with a strong overlay of Soviet city planning and building.  After a major earthquake in 1966 leveled a good part of the city, new large Soviet-style structures were built which are now museums, an opera house, and government buildings. 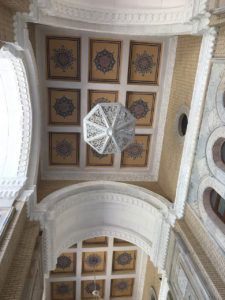 The ceiling of the portico of the Opera House in Tashkent

A few older Tsarist brick structures remain and old style Soviet apartment blocks can be seen near the center of town, peeling facades and badly in need of repair.   We went to a history museum with excellent well maintained exhibits but the women’s bathroom had a huge hole in the center of the floor where a drain fell in and there were electric wires sticking out of the wall.  On the sidewalks, there were gaping holes and uneven surfaces so that it is necessary to look down where one is walking at each moment.  High end stores line their main street and there is a general feeling of prosperity.  Later in the day we ride on the Tashkent Metro which is clean and quiet, built after the model of the Moscow subway. 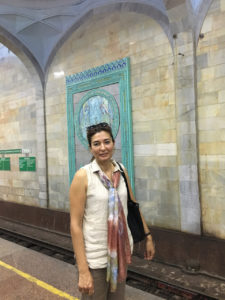 Our guide Shirin in the Metro Station 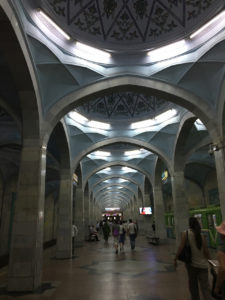 We visit the main historic religious center of Tashkent with a large 7th century exquisite Koran on display and a former medressah (religious school for boys) now turned into local handicraft shops. It is very clean here — undoubtedly the result of the strict control which governs life. Uzbekistan’s President of the past 2 years appears to be making progressive changes but what will happen remains unknown and I am told the population is waiting  with uncertainty.  We understand, for example, that under the former administration boys under 18 were not allowed to frequently attend their mosque and if they did so they were put on a black list and closely watched as a deterrent to enlistment by any radical groups.  Perhaps the sense of successful commercialism and development which we see here has only been made possible through the suppression of certain liberties we take for granted. 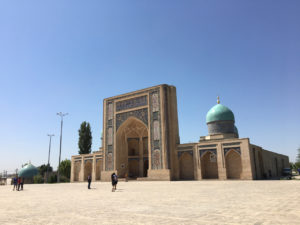 The Khast Imam in Tashkent

We have lunch at a fancy restaurant in town, often used for weddings, with a 5 course meal at a cost of $7 (including vegan food for me!). Our visit to the Chorsu Bazaar is again a surprise: a large domed structure with clean organized white counters for salads and cheeses and meats. Outside under an awning is the more expected smaller stands and floor displays of fruit, grains and vegetables.

Fresh cheese in the market

It is also a transition for me that I can not understand the signs or speak vey well to people. Although some writing is still in Russian Cyrillic alphabet, most is in Roman alphabet in a language I do not understand, Uzbek.  Older people have studied Russian and still speak it but it is no longer being taught in most schools and the transition is happening quickly to a non-Cyrillic environment. At the bazaar a woman stops and tells me in Russian how god loves me and Jesus is looking over me. I tell her I am not Christian but she lets me know that god loves me anyway – and she gives Judy and me two apples.

I am asleep before 9 pm as we have a 5 pm wakeup call for tomorrow’s adventure.