It is a little after 5 am when our plane lands in Bishkek, capital of Kyrgyzstan, and the shadows of the high Tien Shan mountains are just beginning to appear in the morning light.  Our first sense of how very different this country is occurs when a large very Russian looking man gathers us up and leads us to his car with the steering wheel on the right side (like in the U.K. and India) and drives at hair-raising speed along an empty free-lined road on the right side of the road (like in the U.S.).  I finally dug out a seat belt hidden in the creases of the back seat while Judy just said a prayer. 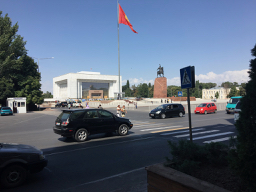 Our hotel is comfortable and the epitome of Soviet-era ugly.   It is hard to describe the mixture of stark bareness with crystal chandeliers and leather couches. 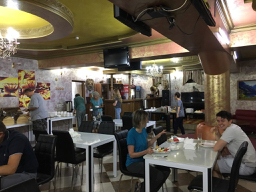 The City itself is in a building frenzy with apartment buildings rising in many places and it appears that although the country became independent from the Soviet Union in 1991, it has yet to evolve from the aesthetics and directives passed down from Moscow during the prior 70 years.   Russian still remains the main language of education and most signs are appear in both Russian and Kyrgyz (which uses a slight variation of the Cyrillic alphabet of its dominant friend).

The grand squares are many and massive with huge statues of various national heroes in front of super-sized structures without any sense of proportion or environmental design.  There are very few people in these large open areas, perhaps intentionally discouraging any mass rallies.  Nevertheless there was a group of protestors in front of the Mayor’s Office in town so that there is some freedom of expression around these days. 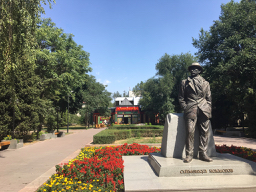 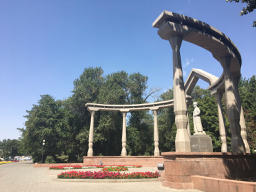 On the positive side, there are many tree-filled parks, with numerous colorful inflatable bouncy houses for children scattered within them.  The first night Judy and I walked to a shopping area where many outdoor stalls under umbrellas were selling everything from electrical supplies to children’s clothes with food carts displaying numerous forms of fried, undoubtedly meat-filled dough.  The streets were filled with people coming to shop after work and the faces were a beautiful mix of various forms of asian-mongolian with an occasional white Russian coming by.  We were told that now there are about 17% Russians in the city, down from an earlier 42%, most leaving for lack of jobs after Independence. 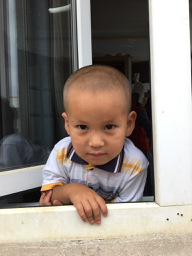 There are modern stores and food chains, including KFC and, to my surprise, a number of Nathan’s!!   How did those get from Coney Island to Bishkek?   The power of free enterprise and a meat-loving population, perhaps.   I have a big advantage over my fellow tourists as I can at least read all the signs in Russian, although I might not know what they mean.  My basic-level Russian language skills are suddenly coming back after 50 years of disuse and it is interesting that I can suddenly remember a word I have not heard for so many decades.

An old movie theater in town

Yesterday,  our small group of four hired a car and driver to go the Ala-Archa National Park which was a magnificent valley with high sharp craggy snow covered peaks high above us.  We do a moderate hike along a strongly rushing river and then a second hike which went steeply uphill over rocks and scree which was not easy but which we all masterfully achieved.   There were a mixture of tourists and more local visitors at the park, some really serious trekkers and women from China in heels.  It was a glorious day with some thunder at the end and even a few sprinkles of rain when we were back in our van. 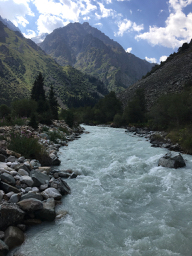 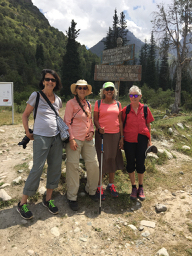 Janet, Varya, Claudia and Judy – having completed our hike.

Our tour group seems like a mix of good people from Australia, England, Germany and us Americans and Canadian.  We have a full loaded van which will be tight and perhaps uncomfortable for the next week in hot Kyrgyzstan until we change at the Uzbekistan border.

A trip to the National Museum of Fine Arts with spectacular textiles and very few good paintings as most were of the Soviet Realism genre. 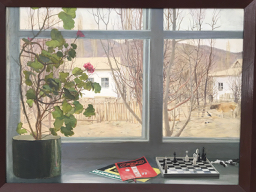 My favorite painting in the museum 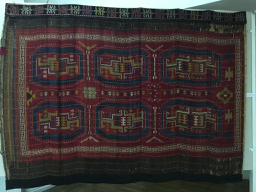 A highlight of yesterday was a visit to a traditional Kyrgyz family who showed us the different types of headdresses in the region and what they mean for the women who must endure many yards of cloth wound around their head as indication of their family and status.  At the end of the demonstration, we sat around a long table for tea/chai with a feast of fruit, small fried bread pieces, and tomato cucumber salad. 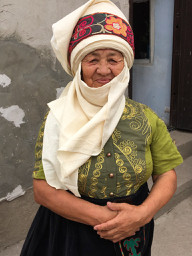 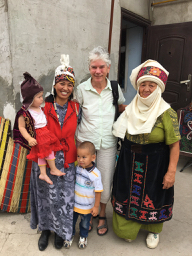 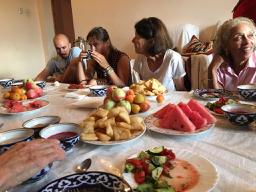 I am not sure when or if I will have internet for a while so this is a very speedy missive indeed.