Istanbul is an impressive product of its disparities — in religion, in culture, in economic status.   The beautiful and the ugly are always not too far away.   With Eastern Europe on one shore and Western Asia on the other,  the tension between the two has defined its history and made its tourist trade both uneasy and extraordinarily interesting.   Now 98% Muslim, the number of Istanbul’s foreign visitors from non-Islamic parts of the world has plummeted due to safety concerns while the presence of increasing Arabic speakers is obvious in the numbers of fully black-sheathed women in the historic part of town, Sultanahmet, where we are staying. 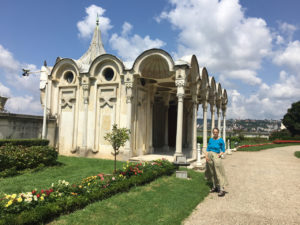 Although there may now be a cultural encouragement to have all Turkish women with covered heads, it is certainly not universal and you find such dichotomies as a woman in a brightly printed headscarf but wearing skin-tight leggings and very tight tops, next to a chicly dressed woman in heels beside another in various orthodox prints from head to toe.  It encourages us to see covered young women obviously friends with their fully-modern peers in jeans and tee-shirts, although I realize “modern” is a culturally defined term. 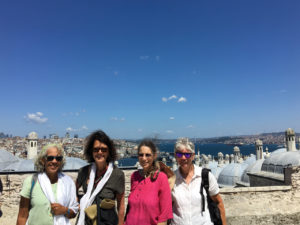 The beautiful can be seen in the impressive large mosques defining the landscape from the turquoise waters of the Bosphorus, the gracious old buildings with early 20th century European design, and the friendly and open people.   The ugly can be seen in very poor disintegrating wooden houses, looking eastern Russian to my eyes, in some parts of the city and the number of police protecting the top tourist sites.   And the numerous scams about which we heard. 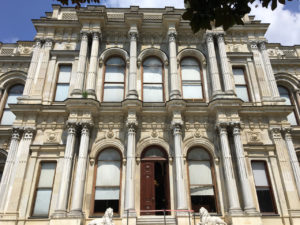 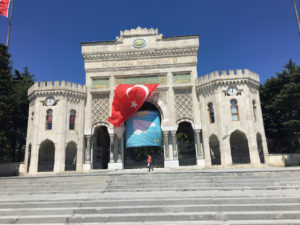 One day the four of us took every available form of public transportation:  a ferry across to the Asia side, the underwater Marmaray express tube train back to Europe, the Metro to the North part of the City, then changing to the light rail and finally a very crowded bus back to our hotel.  Everywhere people were polite and often gave up seats to our aging group (the grey hair in our group probably helped). 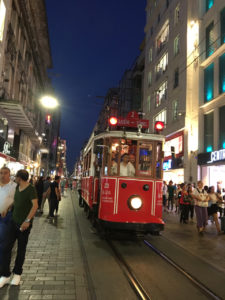 At night in the new part of the City.

During that day, standing on a curb with the others waiting for a light to change to cross a busy street, some women came up near me and the next thing I know is that I feel a hand in my pocket.  I grab the hand, hard, yank it out and shout loudly “Why is your hand in my pocket?”  with some profanity thrown in (unusual for me).  The two women close by (I was told the other 2 who were part of the gang of thieves immediately left) just looked and me and tsk-tsked at me  while I told them in a language they could not understand that they should be reported to the police.  My wallet with my passport and some of my money was in that deep skirt pocket but unbeknownst to the women, it was attached by a strong hook to my skirt so that it could not be removed.  This did shake me up and has made me more wary of my surroundings. The women were perhaps Romany although we had been earlier warned about the Syrian refugees which may have been more scapegoating a desperate group of 4,000,000 people who have poured into Turkey since the violence in their own country began. 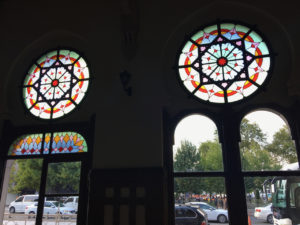 Our visit that day was to the Chora Church, famous for its Byzantine mosaics, and standing next to the remains of the great defensive wall which once surrounded the city. 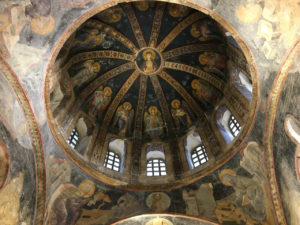 Dome of the Chora Church

Our walk downhill took us past two Synagogue gates, one just a skeletal remain and the other still an entry to a current temple. 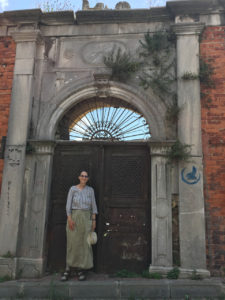 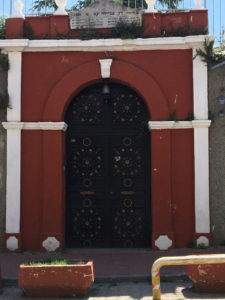 We also stopped off for a drink at an empty cafe and befriended an expansive gentleman with 2 daughters and grandchildren in California who is planning to move there when his wife, one of the most noted cardiac pediatric surgeons in Turkey, is ready to retire.  The neighborhood was one of very old wooden houses in various degrees of decay, cobblestone streets and an attempt to maintain its historical importance without any resources to do so.  Our new friend took us to a peaceful Eastern Orthodox church, redolent with the smell of incense and set in beautiful gardens.  He proudly pointed out his home, a completely renovated wooden house in the old style and praised the sense of community in his neighborhood. 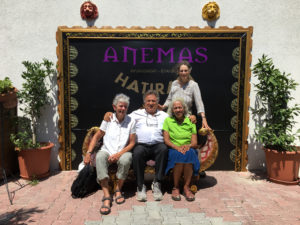 Further downhill, near the water, we walked through the area of Balat which was formerly home to a large thriving Jewish community and now is the kind of urban setting where clusters of small shops sell everything practical for life.  We turn into a street filled with restaurant stalls and then an area with trendy cafes with art on the walls and young people sitting outside looking at their tablets and phones. 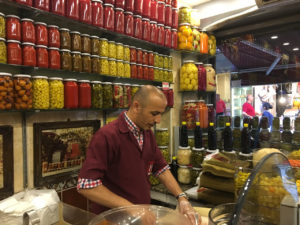 Our 2-day private food tour took us to the new part of the city, across the Galata bridge, to taste some of the exceptional food from this part of the world:  fried meat balls for some, a delicious raw vegetable burrito, and a cafe spread of dolmas, eggplant dishes, hummus, small fried fish, and stuffed mussels.  For breakfast we had fresh borek with layers of crisp pastry and dinner at a local home, sitting on the floor where the charming hostess served us her lentil soup, rice pilaf and eggplant and tomato stew. 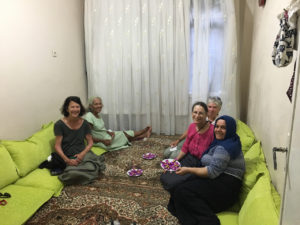 We had a fabulous guide, Burak, who was open and honest with us —- the only person we really knew in Istanbul and whom the next day we accidentally met getting off a tramcar.  An exceptionally small world. 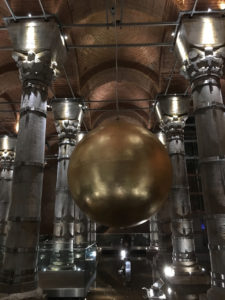 Art amidst Roman Columns in an Underground Cistern

The great artifacts of the Ottoman empire were undeniably impressive, the great mosques of Aya Sophie, the Blue Mosque, Suleyman the Magnificent,  and the incredible tile work and architecture of the Topkapi palace. 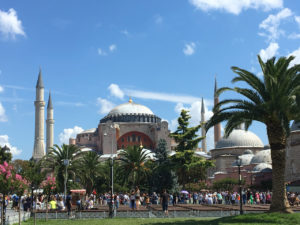 But for me, what will stand out the most is the sense of a very vibrant city, trying to maintain its importance in the world in the face of the schizophrenia it has dealt with for many centuries: balancing between the European world of innovation and individual expression and the Asian side where religion and conformity to conservative models holds sway.

On to Central Asia!