The four of us are sleeping together in a round yurt tonight, felted colorful rugs on the floor and gold and red embroidered tapestries encircling us.  The sun set a short while ago amid grey and pink clouds on this timeless landscape:  it is exactly as I imagined.  Immense brown and green bare hills around a sloping plain that ends in a blue lake with scattered herds of sheep and horses and white yurts of the herdsman who come up each summer for the fertile grazing land for their flocks. 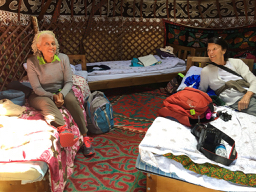 Claudia and Janet in the Yurt

It is a timeless scene except for the trucks and cars now parked near the yurts and the existence of vehicle tracks occasionally on the hills. We traveled on a rough unpaved road for many hours to get here and despite the lack of electricity or even cellular connection, we do not feel isolated as there are other tour groups here as well.  We have been very well fed all along this route:  always a tomato and cucumber salad, another salad, soup and a main dish, very meat heavy.  I have been provided some vegan (I hope) alternatives although I have been consuming about 10 times more oil than is usual in my diet. 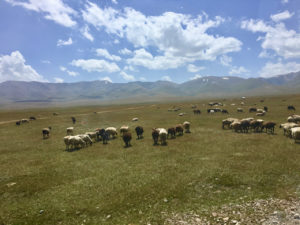 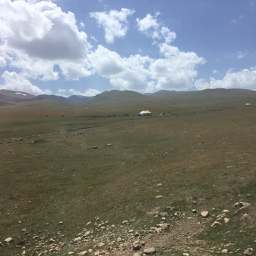 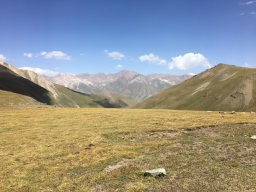 We are at an altitude of over 10,000 feet tonight in our yurt near a blue serene lake.   On our drive here, we passed by small rivers and rivulets creating rich green pastures through wide valleys.  Spectacular open vistas, not unlike those in Wyoming except on a greater scale.  Our guide, young and energetic, took us on a hike this afternoon but with no time to acclimate to the altitude and with my bad knee causing me trouble on the upward climb, Claudia, Janet and I stopped part-way up, high enough for a beautiful landscape view and to hear the baaing of sheep and neighing of horses on the hillside and see two young horseback riders herding stray animals.

From our resting place on our hike

We returned to camp to watch a demonstration of traditional horse-centered nomadic games, similar to ones we also saw yesterday at another stop:  picking up packets on the ground from horseback, trying to unseat a fellow rider by wrestling, and, the one I found quite painful, a football game on horseback with two teams trying to score goals by picking up and galloping toward a goalpost with the headless body of a newly slaughtered goat.   Traditionally, the goat is eaten at the end of the day so perhaps it does have a more useful life than the pigs originally killed for pig skin footballs but in either case, I don’t appreciate it. 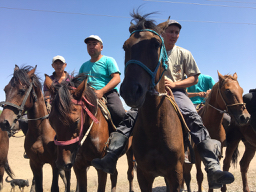 From yesterday’s game, part of a professional team 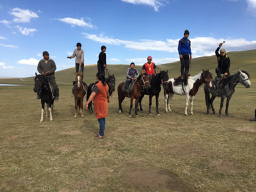 From today’s demonstration, local kids who live on horses

The stars at night, without electricity anywhere in the region, created a white streaking ribbon that is the milky way with bright planets and sparkling stars everywhere.  As I got up to hike across to the outhouse around 5 am, I also had a chance to see the pink streaks beginning in the east over the silent lake.  It was cold at night and my down jacket was much needed. 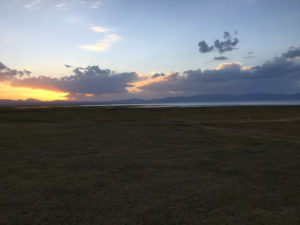 Sunset over the lake

On our first day on the road, our travels took us to an ancient tower, once used to spot caravans crossing along the Silk Route, and a nearby ancient graveyard site with markers brought from nearby places.  Beautiful stone faces, some more than 2000 years old, telling a story of another civilization that breathed on this land. 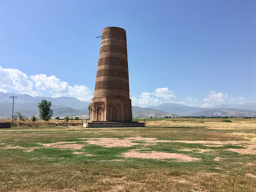 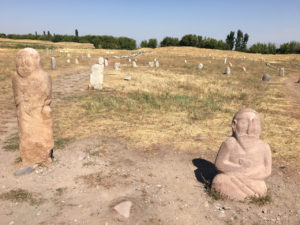 The nearby cemetery and monument area 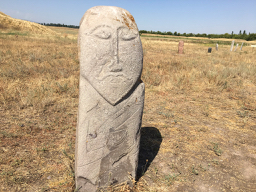 We stopped by a lake which was once a lively summer resort for the Russian elite and now sees local people enjoying the water with their families.  I feel there remains a very close sense of the Soviet Era — not only in building construction, without care of workmanship, but in the stores and arrangement of the world here. 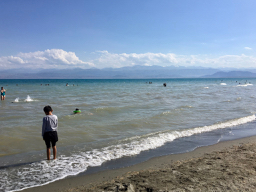 The people here are beautiful.  The women all in kerchiefs tied around their heads and long dresses but I get the feeling this is a continuation of tradition rather than adherence to any kind of religious doctrine, although all here are Muslim.   There is a mosque, usually quite modest, in most villages that we pass through.  Everyone is friendly, men and women, reaching out to us to find out where we are from and begin a conversation.  Gold teeth shine as they openly smile, part of the Russian influence and I hope this means they are getting good dental care.  We understand the average life expectancy here is 72, not very high in world standing.  The older women are almost all overweight and the men in the country lead hard lives of heavy work.   We have seen groups of men and women on the side of the road with scythes cutting down weeds and men pitching hay and hauling wood with donkeys, which are common beasts of burden here.  Sugared foods are common, especially jams and honey, junk food is on the rise, and meat is the main staple. 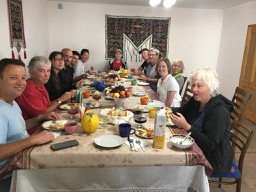 Our group at a homestay breakfast 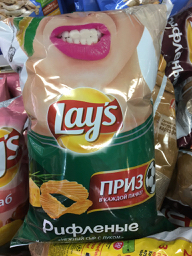 Junk food at a store

Today we continued on a mountain road to cross a 11,500 foot pass and then wended our way down into a valley where coal is being extracted in graceless open-pits.  Large trucks laden with coal pass us in the opposite direction and we saw black chunks fall from one of them when it is about 15 feet in front of us. Apart from this smudge on the landscape, the vistas of mountains and small remaining winter glaciers are vast and open.  Once below the tree line, the geography changed to craggy red rocks in a wide gorge with a river at road level and many pine trees, not unlike the scenery in Colorado. 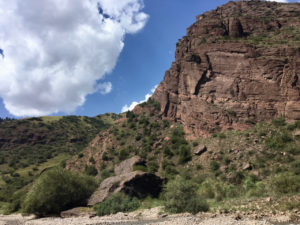 A picnic by a lake where local families were swimming and now we are in a very quiet village where we are staying in various guest houses.  Judy and I are in a room which is probably normally the master bedroom cum living room, with the bathroom across the yard, shoes off coming in and out.  I just washed some clothes and hung them to dry in the backyard where chickens roam and will now take a walk with our guide along the one-road of the village.  No internet, no mobile phone connection — which allows me to see how powerfully we now depend on our cyber connections at all times. 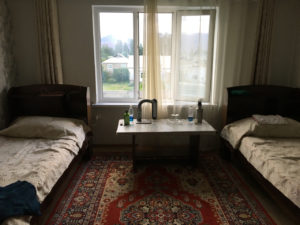 One of our earlier guest house rooms 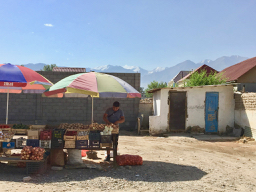 The air is cool here but we move back into heat tomorrow.