Way before I began learning world geography, there was a territory known as German South-West Africa, which became part of the British colonies after WWI.  After independence in about 1980, it was called Namibia.  It is a land of sand and desert, home to part of the Kalahari, with limestone mountains and sparse vegetation in the south and more fertile land in the North.  A harsh country but still a source of greed by the Germans and then the British due to natural resources.  Camels were imported to patrol the land a hundred years ago but now it is 4 x 4s and RVs which control the roads of the Skeleton Coast. 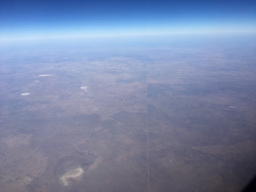 Namibia from the Air

I fly over vast areas of uninhabited land from the inland capital of Windhoek to the main coastal deep-water port of Walvis Bay and from there take a shuttle van to the town of Swakupmond, a few miles further North.   It was founded as a German city and remains so in architecture today with mot of the white inhabitants and visitors to this sea-side town speaking Africaans, that strange dialect derived from 16th century Dutch.  The British imposed strict apartheid until independence and the central town remains an enclave of European shops and restaurants.  With its distinctive old German architecture, it is a very distinctive small town with a few main streets, many stop signs, and only 1 stop light.  It looks like the old buildings were never allowed to fail but were continuously maintained and integrated with newer buildings across time. 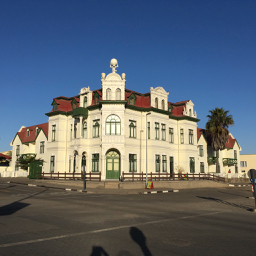 I meet my group of 11 other people at dinner:  we are 3 Americans, 2 Norwegians, 2 Dutch (originally from South Africa), 2 from India who now live in the Netherlands (a vegetarian and a vegan)d, 2 Australians and 1 Taiwanese.  I have trouble understanding the Dutch with the South Africa accents and the Australians!   The next morning is free to explore this town a bit more.  There is a museum right near the well developed esplanade next to the roaring ocean which breaks with great force on a long jetty. 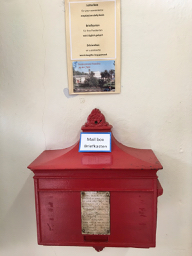 In the museum but working — I mailed a postcard to my grandkids from this box.

A towering lighthouse is one of the earliest buildings right in the heart of town.  The many restaurants cater to the tourists who come for water activities and the old-fashioned and secure ambiance of this town.  The weather is relatively moderate here, tempered by the ocean, drawing people who have settled in less lugubrious locations.

Lighthouse in background and old administrative building in front 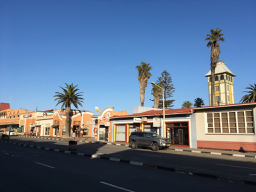 A main street with some old and new buidings

It is hard to imagine the courage it took to immigrate to this empty shoal of land where little was available that one was accustomed to in Europe at the turn of the 20th century.  Everything had to be imported and life perhaps existed around the churches that quickly followed where ever Europeans Germans planted their foot.  I asked our guide about the religious dominations today in Namibia and he said that 95% were Christian and of those 50% were Catholic.  The missionaries did a thorough job here.   Today, it looks like the town is well integrated — and this is 18 years after independence – although I don’t know who owns and who labors in this society. 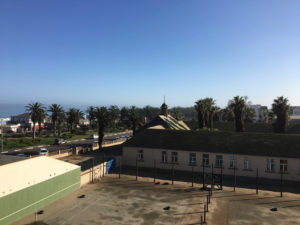 From my hotel balcony with town primary school in front and ocean to left.

Tomorrow into the countryside.