I often consider why traveling is so important to me.  On this journey, as I move from Northampton, Massachusetts, down to New York City and then over to the Newark Airport, I think this:   how I interpret new places in the world is totally dependent on what I have learned from my past life experiences.  Like a baby constantly adding to its vocabulary, the places I visit give me new data which becomes who I am.   I guess I like change.

On the first leg of this journey, I land in Sao Paolo, Brazil, with a 9 hour layover before my next flight.  A friend has arranged for a car and driver to pick me up and drive me to some of the local sights and then join him for lunch before returning to the airport.  The driver speaks only Portuguese and we communicate via a translation app on his cell phone.  We hand the phone back and forth and gesture as well.  Eu gusto edificio antiqua (or something like that).  “I like old buildings”. 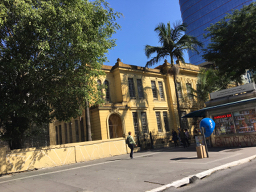 We are in heavy rush hour traffic as we drive toward the old part of the city and my impression is of failing buildings and poor housing by the side of the road with a backdrop in the distance of new large high rise buildings.  I think that here, like other places I have visited, there is first class engineering and design with no afterthought of preservation over time. 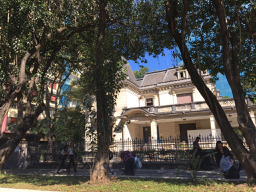 In the city itself, we head to the old center where there is a large amount of graffiti sprayed on the sides of concrete buildings and smaller shops.  We pass by a large structure housing a municipal market from probably the early 1900s around which I see commercial fruit and vegetable sellers.  As we near the old Cathedral area, there are some beautiful old commercial buildings, in need of repair, interspersed with disintegrating new construction.  The park outside the church looks like there are homeless camped out in it while opposite is a main shopping street, now a pedestrian mall, where many people are in and out of stores. 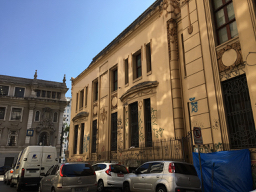 We drive further on and the neighborhood and the look of the people changes greatly as we enter what is obviously a more affluent and prosperous area.  Paulista Avenue, a main business district, with large office buildings with an occasional remain of an elegant old home. 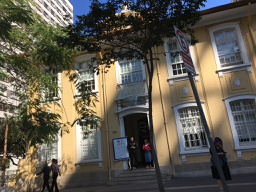 Lunch with my friend is at a buffet at MASPE (which I am not sure it means — museum of something) which is an architectural landmark of the city, a grey block floating on 4 large red feet. 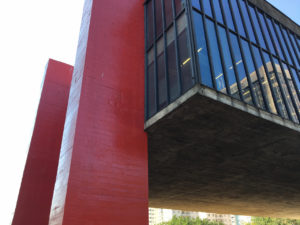 And then back to the airport, quickly without traffic, and I now am about to land in Johannesburg for my next transfer — one of two more on this long journey.  And maybe wish me some sleep.