I planned the dates of this tour around the Tazaungdaing full-moon harvest festival celebrating the end of the rainy season during which donations and new robes are given to the local monks.  But I did not know exactly what that would mean for our journey.  Now I know — from here on out it will be a stream of ceremonial parades through the streets and consequent erratic traffic. 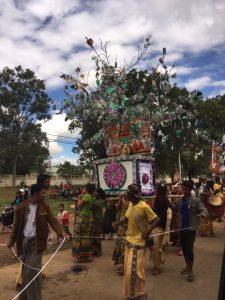 On our way to our hotel near Taunggyi this morning, our bus meets its first traffic impasse of unknown origin.  And then we see a procession coming toward us with groups of children carrying armatures decorated with items to be donated to the local monastery and then larger floats carried by young adults, including one ingenious looking backhoe made of recycled products, probably made by an engineering school.  Our guide tells us there is a competition and each school class has put together a float to carry their donations and that this is a major annual event.  Due to the parade, our van can not move and sits among cars, trucks and buses. It is a pleasant way to spend an hour, watching the young people with their decorated floats move by.  This is an important holiday period and for 10 days there is no school. 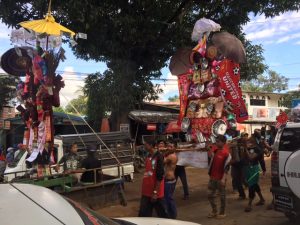 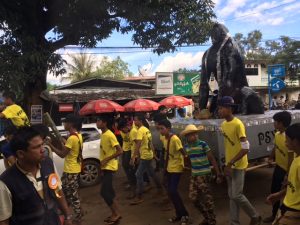 Susan is now sick and stays behind at the hotel (actually a golf resort) as we move on to head to the main attraction in this area — the Taunggyi balloon festival.   As we approach the site, our guide tells us how for 10 days there are smaller balloon competitions all day and larger balloons with “fire falls” all night.  More specifically, the daytime balloons are animal images and are “only” about 20 feet wide.  They are formed by hand with carefully joined paper over many months by various local villages and groups.  A small balloon costs about $2000 for the process. 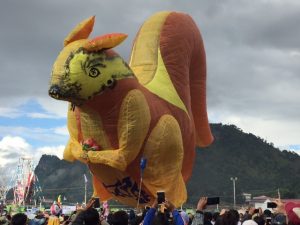 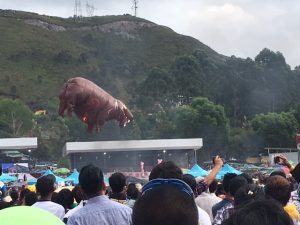 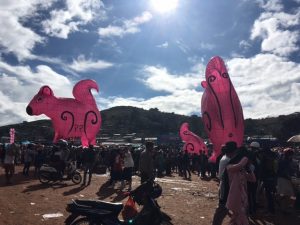 At the bottom is a small iron basket with kerosene which is lit with a torch and the hot air formed by the burning fuel causes the balloon to fill up, lift up, and float high into the sky.  At least that is the theory.  But in reality, lighting a small fuel container surrounded by highly flammable paper is a difficult business .  A number of the balloons catch fire either initially and never make it off the ground — which is dangerous enough when you have a kerosene-inflamed pile of paper in the middle of a large group of people, mostly families with children.   Or the balloon lifts off and then starts burning and pieces of flaming paper fly off as the balloon crashes down and bursts into flame.  We saw this happen time and time again as large burning masses rained down on hawkers’ stalls and people’s mats and into crowds.  We quickly realized we needed to be upwind so that the balloons did not pass directly over us.   We saw no one hurt but were aghast at the lack of any kind of safety precaution, not even fire extinguishers were in sight.  The fish, birds, and one of the zebras below did not make it very far. 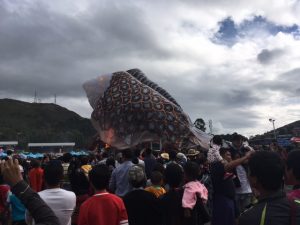 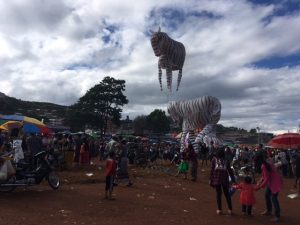 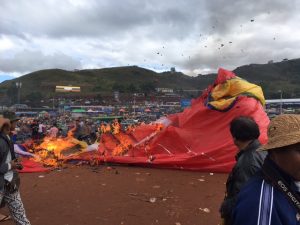 The evening is the main spectacle with large, very large, balloons, weighing up to 100 kilos (220 pounds) and carrying a significant payload of fireworks.   But these are not like our fireworks which are shot up and explode in the sky with a pop and a rain of color.  These are fireworks carried upward by the hot air balloon and timed to release sequentially as the balloon rises so that the display goes on and on for about 30 minutes from one balloon.  We were told 24 balloons were  scheduled for our night, starting at 8 pm and going off about 1-2/hour.  However, the intensity of the crowds was hard for us and we were told the nighttime crowd would be far greater and mostly adults, no children. In addition, the dangers were significant (Mary’s Burmese family told her to avoid this event altogether because of the risk) as these large balloons also sometimes fell into the crowds and were known to kill people. 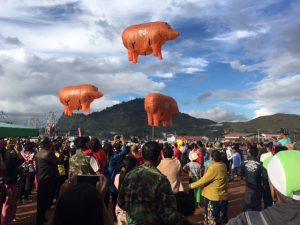 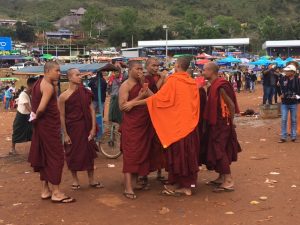 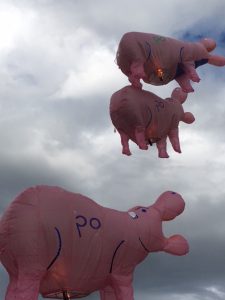 Below:  Michael dancing with the locals at the festival. 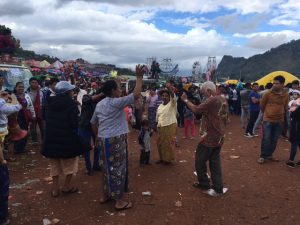 So we left at about 4:15 from the grounds — and got caught in the worst gridlock I have ever experienced where we sat on our (comfortable) bus at one corner for about 1.5 hours before moving a few feet.

But this turned out to be a fortunate event for us — as we had a view from our bus windows of the first 3 balloons to be sent up at night and the fireballs which emanated from them.   It is a competition and we could see the difference between the quality of the 3 entrants — so the entire range over 10 days must be rather significant.

Have I mentioned about the food yet?  Every restaurant seems to have the exactly the same menu and there is not a huge difference in the quality between one and another.  We have been having large breakfasts and lunches and often foregoing dinner altogether.   Tonight, on the bus, during the 4 hour ride back to our hotel (which should have taken no more than 45 minutes), we had a group dinner of potato chips and Ovaltine cookies with bottled water.  Quite a feast.

Tomorrow we leave back to Yangon.