We are skimming along the water in the one-person wide long boats powered by rear motors which is the main transportation in the Inle Lake area.  It is magnificent here.  This is a major tourist destination for obvious reasons. The Shan mountains rise in blue grey beauty around the large lake while the local culture is as picturesque as possible:  wooden houses all on stilts built around the water’s edge, fishermen paddling with their famous one-legged rowing posture with nets in their hands, and tribal Pao people with their distinctive turbans and clothing.  We are fortunate in that it is not raining and the grey clouds mischievously cross overhead, sometime dropping a hint of rain and other times letting the sun shine through.

Islands of green water hyacinth, unfortunately imported by the British and taking over inland canals all over South Asia, appear in clumps.  In a more concentrated area there are the floating gardens:  rented out water spaces on which hunks of sod are brought from the shore, mixed with seaweed and other materials and then anchored by bamboo poles in the middle of the lake on which tomatoes and other vegetables are grown as cash crops.  An amazing ecological use of space and resources in a very old community. 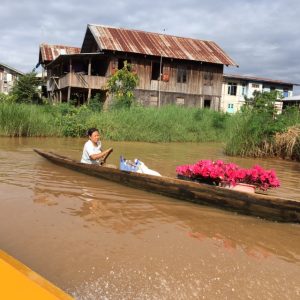 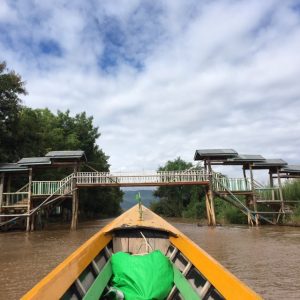 We travel all the way down to the bottom of the main lake body to the most famous temple in the area from which there is an annual procession on now-moored golden barges.  These barges carry four famous small buddhas who have been covered with so much gold leaf that they are now small boulders of gold.  The fifth Buddha figure stays behind as twice the barge capsized when carrying it.   Like so many other temples in Myanmar, the tiered golden spires rise up into the sky and here are reflected in the water as well. 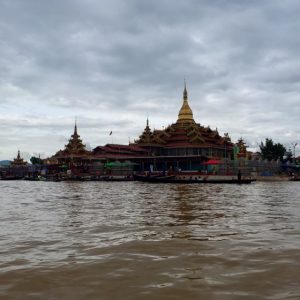 The weaving center we visit here has something unique:  lotus products.  By snapping the lotus stems and pulling them slowly apart, a sticky thread appears which is then gathered and rolled into a string and, after additional treatments, is used for weaving — it is much beloved and very expensive.   We watch the room full of women working on their old wooden looms, weaving incredibly complicated hand-dyed ikat designs, silk and cotton and combinations with the lotus weave as well.  I ask how much the women earn weaving all day and am told about 5,000 Kyat which is equal to less than $5. 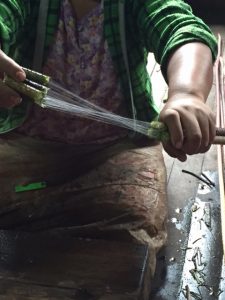 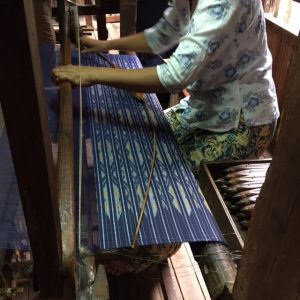 Then back across the lake, 4 of us in each long boat, to our hotel and individual bungalows on stilts on the water’s edge, tin roofed, modern and spacious inside. 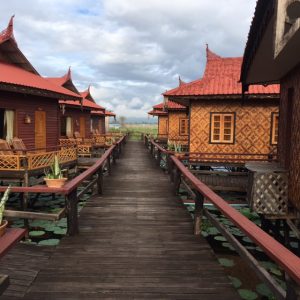 The next morning found Jack under the weather and Mary and Michael wanting a day of rest so four women set off to Insein on a most magical boat trip on a side canal in the early morning light.   The grey clouds parted as we moved past villages and under foot bridges spanning the canals.  We traveled through uninhabited empty heavily wooded jungle and it was hard to resist the thought that here was the old Burma of our imaginations, rich with heavy vegetation with rice fields on either sides and the purple hills behind in the distance.

Insein has a central temple, up a long covered staircase stacked on either side with tourist tchatshkas.  But its special wonder is the fields of stupas around it in various states of decay, an archeological treasure, unguarded in the middle of this unassuming village.  The government is in the process of renovating some of them but the local believers sneak in and sometimes paint white a stupa that is thought to have special powers.   As we are there early before the large groups of tourists arrive, walking around these 11th-13th century monuments gives us the feeling of passing over sacred ground, once revered with the ghosts of hundreds of years – if we can ignore the plastic wrappers thrown thoughtlessly on the ground. 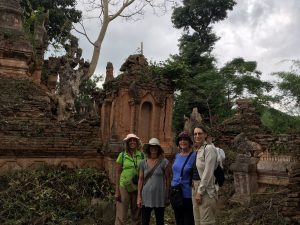 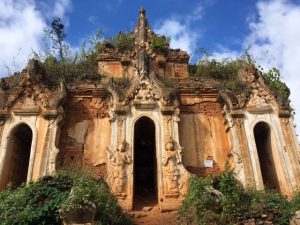 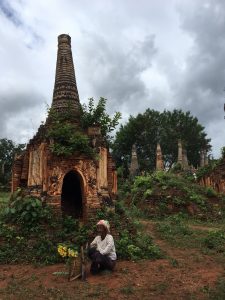 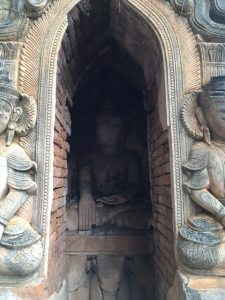 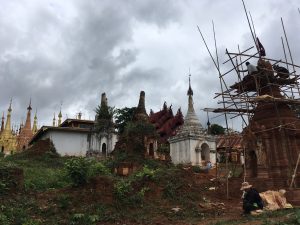 Above, reconstruction in process.  On the side was a woman hand mixing concrete in a bucket which the men then hauled up the bamboo scaffolding.

The temple itself is a maze of golden steeples and glazed ceramic tiles underfoot. 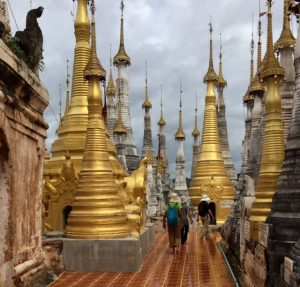 And then the rains came down, in buckets, as we walked back to the boat but by the time we arrived at the jetty, the clouds had again lifted and our wise boatman had covered the seats with umbrellas so we were dry and comfortable for our onward journey. 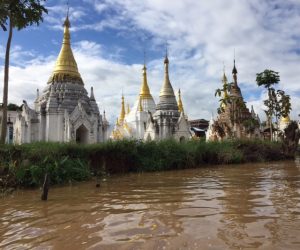 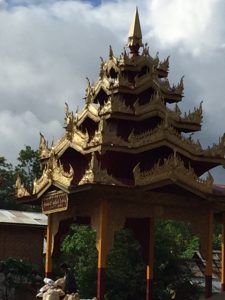 Although our itinerary first included a 6 hour trek in the hills around the edge of the lake, the weather and our stamina and fear of slippery mud had us choose a shorter walk in the rice fields instead.  From lakeshore we walked about 2 miles on the dikes between the rice paddy in various stages of growth — some fields harvested with bare brown stalks, some with bright green rice plants still ripening, and the bright yellow-green rice ready to be cut, hung to dry and threshed.   Some farmers have more modern threshing machines but most still use manual labor for all aspects of this process. 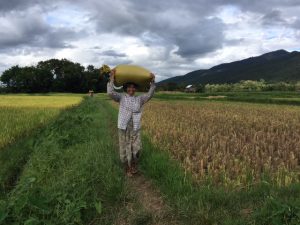 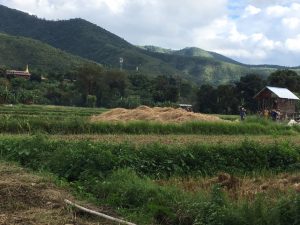 We see a group of men picking the recently cut rice stalks out of the mud and putting them on bamboo ricks for drying and were told these men are neighbors who band together to help each other in common chores in their respective fields.  Thin and sturdy, friendly and with open faces – I think of my husband’s grandparents on their farm in Missouri facing similar chores in a very different setting and the fact that such a way of rural farming life in the U.S. is basically gone. 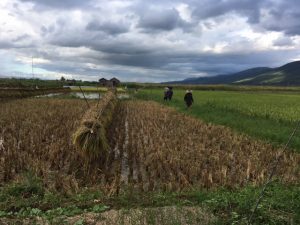 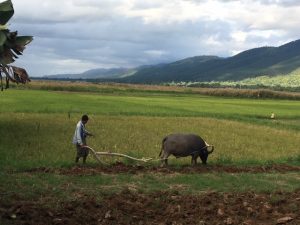 We walk back along the road through the village and run into the children leaving their primary school and we peek into the family compounds along the way, displaying a neat and clean environment with everyone willing to greet us with a genuinely friendly “Minglabar”. 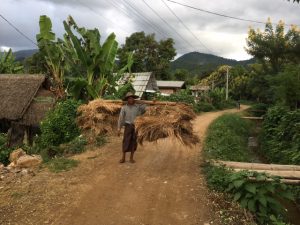 The boat goes fast toward out hotel trying to beat both the dying light and the clouds and  cuts diagonally across the lake, drenching us with spray across our faces and clothes.  We make it back when a short while later the sky opens up and lets loose with a deluge of large proportion.  In our rooms a little later, trying to sleep, we hear an intensity of rain on the metal roof that drowns out everything else and envelops all.   I think of Noah and his ark and wonder if an unexpected monsoon came into the mid-east long ago which would require a boat to weather the ensuing floods.  More practically, I worry about the strength of the wooden piers under our bungalow about 5 feet above the water and eventually drop off with the rain inside my dreams. 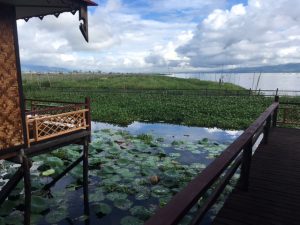 The next morning we rise to see pink and fuchsia lotuses blooming around our cottage and sun and blue sky and little damage is apparent from the evening’s water blessing.