Across the narrow mouth guarded by the rock of Gibraltar, lies the coast that Greek myths were made of, Hercules and his 12 labors among others, and the place where the Atlantic meets the Mediterranean near the city of Tangier. 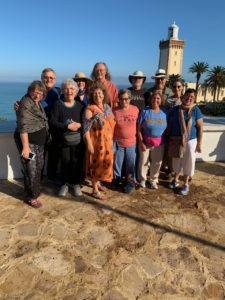 Our ride up the coast to Tangier in cool sun gives us views of the ocean as well as fertile hills and oceanside resorts.  The first place we stopped, and our first impression of this seaside city, was a gigantic shopping center, very modern, clean and spacious.  Our next place of passage was the opposite experience, a walk at dusk around the old medina and kasbah, narrow dark winding streets, young and old men sitting on stone stoops and small shops on quiet alleys selling sweatshirts and name-brand knockoff clothing.  Our goal upon arrival is a visit to a very high end antique shop where a great array of the exotic was displayed from many countries and then up many steps and around several corners (led by a helpful local) to a restaurant at which we were the only occupants.  On a graceful terrace, we looked over the balustrades of the Kasbah fortification to the city lights and ocean below and ate a memorable dinner.

Our tour the next day viewed the huge range of housing in Tangier, from the very exclusive large gated homes of the princes and princesses of the Arabian world to the slums of the working people, as well as the modern apartment complexes and small urban inner city dwellings in between.  The center of the old area was a beautiful collection of two story turn of the 20th century buildings, still active with shops and children.  You could sense what this wide and still prosperous street looked like a hundred years ago when it was the center of a vibrant commercial community. 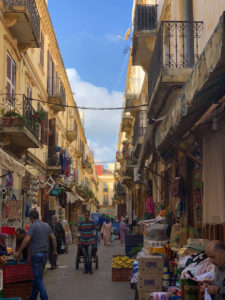 Our local excellent guide for Tangier was raised in this area and said that the difference between his days of youth and now is that earlier there was a strong sense of community, that the kids of the area belonged to everyone and were there to support each other whereas now  the individual took precedence over the group.

The main square in the old area of the city

We visited a small museum in a former synagogue where there were some photographs of older times, families celebrating milestones together.  We were told there was no Jewish Mellah in Tangier but that Jewish settlers were found in earlier days throughout the city. 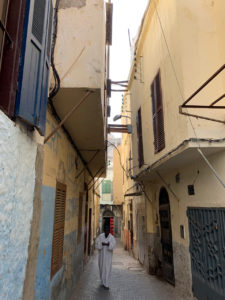 Outside the old synagogue in Tangier

This daytime tour had a very different feeling from that of the night before which was in a maze of tight stone buildings.  Here, in the sunlight, there were wider passages with an easier flow of people and more prosperous stores for local people including gold jewelry places, shops long flowing embroidered kaftans, cafes and small food shops. 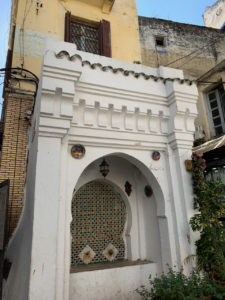 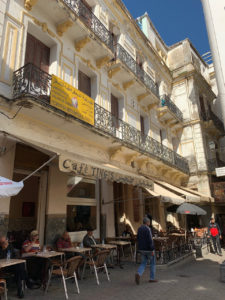 One of the goals for Julie of this tour to Morocco was a visit to the famous “Green Door” painted by Matisse in about 1913.  Our guide took us down the narrow street to the spot from which the well-known image was painted — and there it was, standing proudly, the entrance to a famous saint’s tomb. 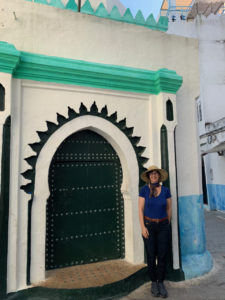 We wandered through the traditional food markets, filled with the riches of this country that produces most of its own food and is said to leave few hungry. 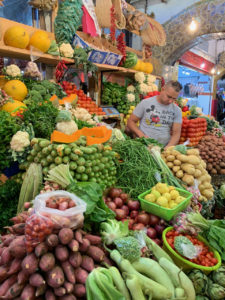 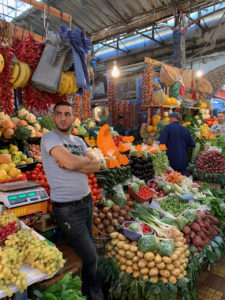 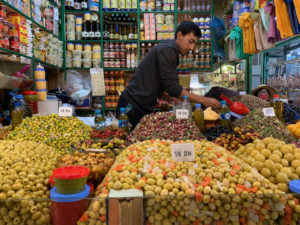 Traditional round bread for sale

Tangier has been more interesting and attractive than I expected — it is understandable why so many Europeans moved just slightly across the water for a lower-cost lifestyle and why it became a mecca for the persecuted in WWII.

Looking inside an old apartment entrance 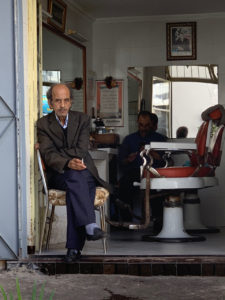