For most Americans of my generation, the word “Casablanca” immediately evokes Humphrey Bogart in a white dinner jacket presiding over his cafe with Sam at the piano playing a lyric variation of “When Time Goes By” in the mysterious winding streets of an exotic culture.  So for our first night in Morocco, with 10 of our group of 12 present, we took taxis from our hotel and arrived in considerably less than the grand style to Rick’s American Cafe, the resurrection of the cinema backdrop.  There was good food and it was thrilling to hear good piano and jazz music in this venue and realize that we are actually in Morocco.  Our first realization that we were definitely not at home was when a violent argument began over which taxis were to take us to Rick’s, as we had agreed to pay an exorbitant fee ($20 for 7 of us). 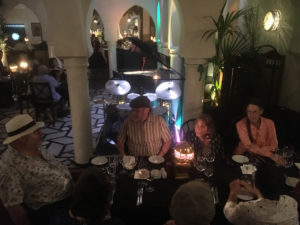 Casablanca — a main port of North Africa and the transit port in WWII between those fleeing a Europe in warfare and the neutral territory of Portugal  — as portrayed in the famous film.  Now a commercial hub of the country, its center is composed of new buildings amid old ones that are waiting for deconstruction and replacement.  The traffic is insane and crossing the street, despite stop lights that are ignored, was hair-raising. 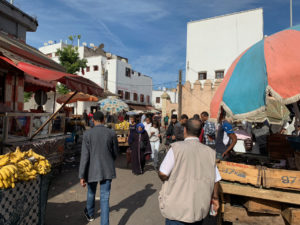 The buildings are mostly in fact  a gradation of white, true to the city’s name – most noticeably the once-white grey of aging painted concrete and stucco.  We see an occasional shell of an old French style edifice among large 4-6 story concrete apartment complexes, with laundry outside windows and a sense of a crowded lifestyle.  One large palm-studded boulevard with luxury brand shops for the uber-rich and hiding along the sidelines, the great old medina with narrow walkways and small shops selling everything from old used tools to high-heeled shoes. 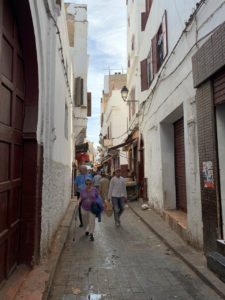 On our pre-tour day, we head together to the Museum of Moroccan Judaism, the only Jewish museum in the Arabic countries, which is housed in a former post-war orphanage for Jewish children.  It is located in a very up-scale residential neighborhood.  We noticed that the signage boards do not name the museum but just point to “Musee” and there is no sign outside the building, just the address, obviously trying to avoid any conflict with its Muslim neighbors.  Once within, it displays its heritage proudly.  A small museum with interesting photos of old synagogues throughout Morocco and artifacts from many of them.  In the enclosed back yard a sukkah still stands from a few weeks ago and we wondered whether any events were held here for the Jewish community, small as it is. 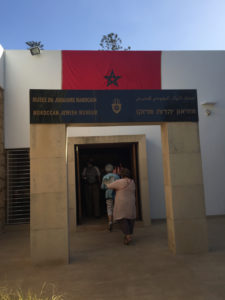 Entrance to Museum of Moroccan Judaism 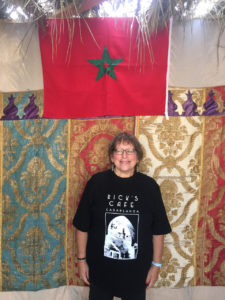 Carol in the Sukkah

Our walk to our lunch spot was through quiet streets of houses with immense bowers of flowers outside the stucco gated walls, bougainvillea and hibiscus of several colors among other pink and red blossoms. 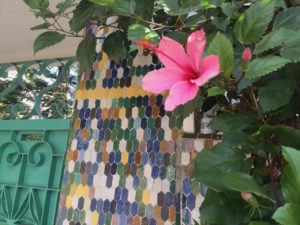 Carol’s photo of flowers along our walk

Following Google maps, we finally come to S.O.C. 37 on a main road, a tennis club serving Kosher food — also ambiguously named but which I calculated was the correct unnamed door when we saw a man with a yamulka enter who wished me “shalom” when I timidly approached behind him.  Sitting on a sunny terrace with an umbrella, it was a truly delightful experience, eating excellent food (the best yet in Morocco) – and although I had to avoid the meat dishes, as a vegan, I didn’t have to worry about any dairy in this kosher place! 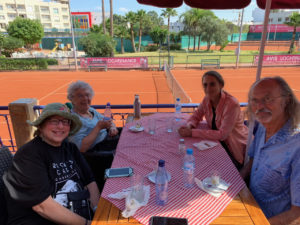 At the Jewish Lunch Club

Our next stop on this Jewish centered cultural tour— the Beth-El Synagogue, built in 1949, a testament perhaps to the thankfulness and/or resilience of those who survived WWII in this part of the world, beautifully and elaborately decorated.  Today, the caretaker, the remaining scion of a very old local Jewish family, tells us that about 35 people come on Shabbat, the men downstairs and women upstairs as dictated by centuries of custom.  And that there are a total of 6 functioning synagogues in the city for the large handful of remaining Jews. 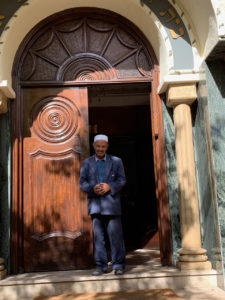 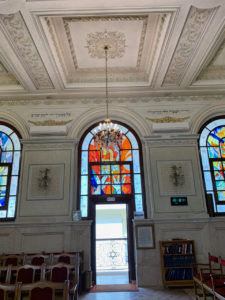 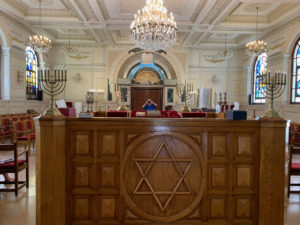 Walking through the original old mellah, or Jewish ghetto area, we come to an older, simpler, synagogue, now a rarely visited museum, the Synagogue Ettedgui.  The photos inside the attached museum depict the life of an active Moroccan sub-community in the first decades of the twentieth century. 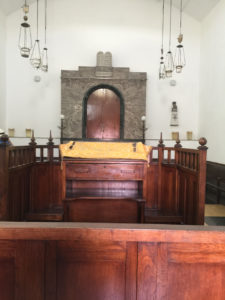 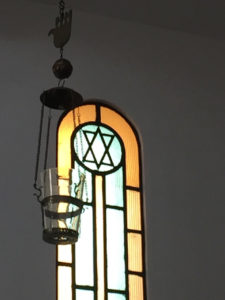 We are on the edge of the industrial waterfront area and the walk back to the hotel reveals some beautiful old houses as well as squares and parks in what was once undoubtedly a beautiful city. 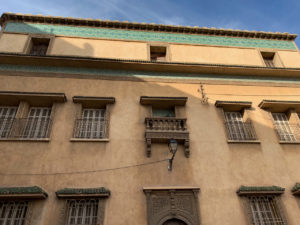 The only true tourist attraction in Casablanca is the the Hassan II mosque, the third largest in the world, holding 25,000 worshippers, which we visit the following morning.  Very elaborate, completed in about 1993, marble and large venetian chandeliers, a showcase of Moroccan artistry, it is a statement of devotion and money but not necessarily of beauty.  But something for the populace be proud of.  It is cloudy and lightly rainy for a short while as we are there. 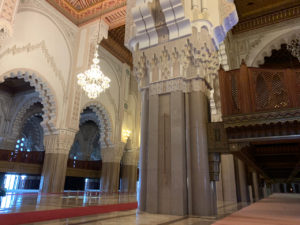 I have been using my limited French which most people speak better here than English.  But communication remains difficult, not just due to language but perhaps because of different cultural norms.  We are having some trouble deciphering the intention behind the words of our guide for this  tour.  But the group is melding very well.

We leave for Tangier shortly in our van, all 12 of us now here, enjoying each others company.