Up into the Mid-Atlas Mountain range we climb, driving to the summer playground for the rich and famous in Morocco, the town of Ifrane, built with French chalets and beautiful green parks.  It is quite a surprise to suddenly find ourselves surrounded by French cafes and wood-beamed A-frames and we take a rest break in this beautiful location where, of course, the king has a residence.  He appears to have a palace in every major town in the country.  He is beloved by many for a number of reasons:  since his ascension in 1999, new schools were built and education became compulsory for all children ages 6-12.  Ufortunately, it seems that most girls stop their schooling at that age to begin to prepare for marriage.  Girls can not marry legally until 18 but we understand that people can petition and certain judges will allow a girl to marry earlier, even at 13 or 14.

We also pass a forest of “barbary apes”, large animals of some monkey-related genus, who are being overfed with peanuts by all the tourists who stop here for the experience of having fairly large docile animals surround you in the wild woods. 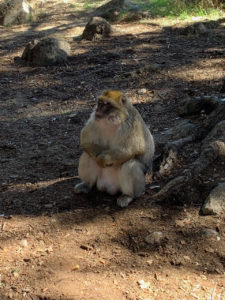 Once in Midelt, our stopping point for the night, some of us go on an afternoon walk into an agricultural village, where apples in great numbers, red and gold delicious and gala, are exported around Morocco and to other countries. 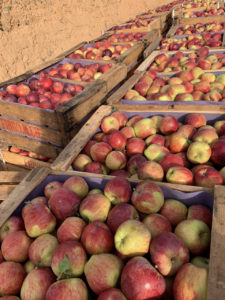 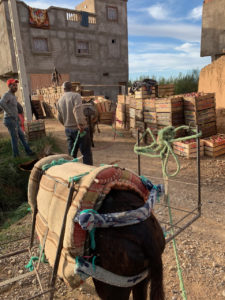 Our guide takes us up into the hills and then down into his town, where children great us and we see rural life in a panorama below us:  women washing clothes by the river, children playing among the dirt piles and ruined buildings, men working with hay and the donkeys carrying their load of packed apple boxes off for transport elsewhere. 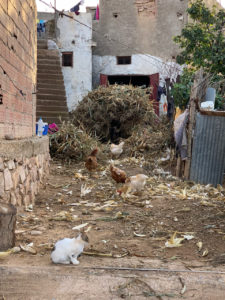 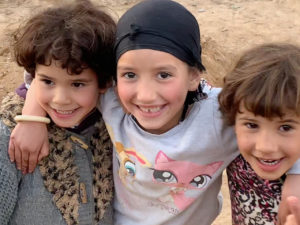 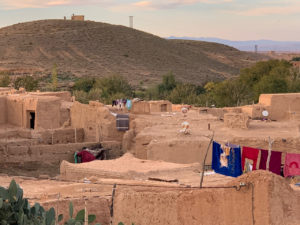 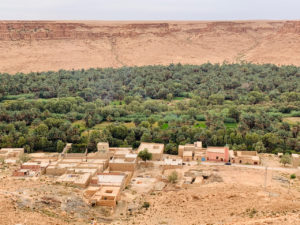 At night, we go into the center of town and, finding the restaurant we had chosen to be closed, went next door for a delightful dinner in a new, modern cafe with great food for all of us.  This transition from old world to new world continues to be a surprise to all of us.  After spending the afternoon in a village where running water is a recent great gift, coming into town with pizza and coca cola signs as the norm seems like a culture clash.   I would need to live here for quite a while to begin to understand this society where the men are extremely helpful and polite and the women are for the most part hidden away without a voice.

Tomorrow we will taste the desert.