Fes – the name evokes images of the exotic, distant travelers from another age leading their camels or walking with horses and sheep to bring the riches of the caravansary from one point to another.  And the reality in the medina, the old part of town, is not much different, even today.  The horses and camels have been replaced with donkeys and mules who push the tourists aside as they carry their burdens amidst the very narrow streets.  It is a place to get lost in, with interesting shops and images around every corner.  The food market was the most foreign I have ever seen (and I have seen many) — with full goats heads and even a camel’s head dripping blood in the meat market. 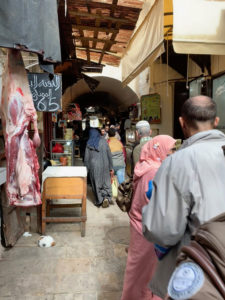 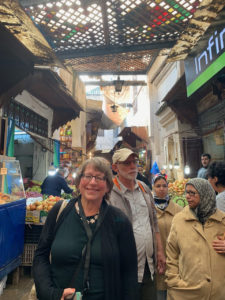 An older New Zealand man we met later in the evening said that he and his wife have been living in Fes for 12 years.  When I asked what made him choose Fes over other cities, he said that of all the 120 countries he had visited, the medina of Fes was the most distinctly different and challenging from his known world. 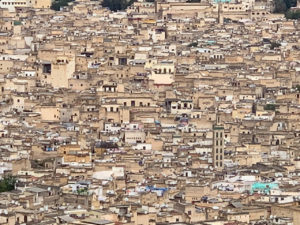 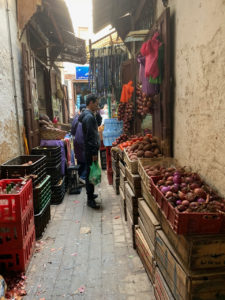 Our guide, a woman, to our surprise, take us first into the Jewish mellah section and to an old, now non-working synagogue, complete with a bima/pulpit and an ancient torah scroll written on deer skin.  There is a small square claustrophobic mikvah/ritual bathing place, down some steep stairs on the side of the main sanctuary, still filled with water.  It is located on a relatively wide street where the Jewish merchants once displayed their wares.  All along on our tour, the guides point out to us the history of the Jews in Morocco, where they appear to have been everywhere, as artisans and businessmen, until they closed up and sold their shops and moved to Israel or elsewhere during the last 70 years.  We wonder if they are including this information because they recognize somehow that we are almost all Jewish or whether this same historic shpiel is given for every tour group of every nation. 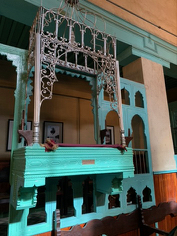 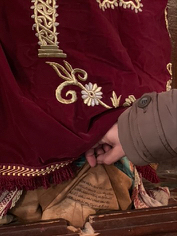 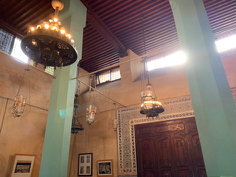 There is famous leather tannery in the medina.  Once in the middle of the old center, it has now been moved by the government to a nearby higher place to provide a better environment for the workers and to give the local residents more distance from the strong smells.  There huge vats for cleaning and dying the skins, goat, sheep, camel and cow, are in continual use for their leather industry.  In India, the leather workers are among the lowliest caste groups in the social order.  I did not ask but wonder if the same is true here, where the men with arms dyed up to their elbows, have been working in this industry for undoubtedly many generations. 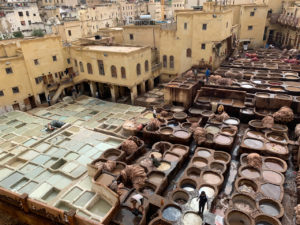 Visits to a woodworking museum in an old mansion, an ancient medrassah for boys to learn Islamic law, and the current men’s koranic university, were all located within a spiderweb of intersecting streets.  Our New Zealand friend, who bought and refurbished a home in the medina, told us that once you know the logic of the medina, finding your way is easier:  each small section of the medina has a mosque and a central square with a main route going in and going out where you will find the everyday foods for sale, brought into the medina on a daily basis, on the outside of each individual section and other commodities for sale being on the inside toward the center.  It is hard to imagine every being able to negotiate through the many alleyways with similar colored walls everywhere. 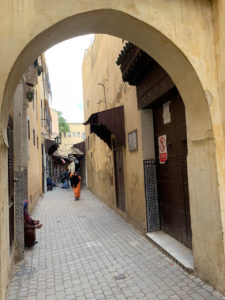 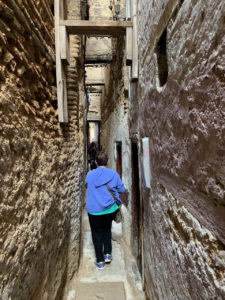 I had seen a poster for a “Festival of Sufism” opening that very night and wished to go — but it turned out the finding out the venue and the time it began was of great difficulty.  Two official guides tried unsuccessfullyto get the information for me.  All they learned was that a travel office in a major shopping mall was selling tickets and we should go there to find out further information.  So after our long tour of the Fes medina, the two guides and I and the van went to the shopping mall.  This was a greater culture shock than the morning in the old part of town — as this very modern mall was more crowded then the teeming throngs in the medina.  All the major named brands were there — European and American — and when we found the travel office, it was closed for the day.  Down the escalator again to the information kiosk where we were told the performance started at 8 pm at the Bab El Makhina and we could buy tickets there.

So that is what we did.  Taking 3 small taxis in the rain, 9 of us went to a “stunning” “unique” “absorbing” “engrossing” “ecstatic” “contemplative” “meditative” (as described by the attending members of our group) performance.  Held outside in the middle of a 14th century walled fortress, it fortunately stopped raining so we could remove the fitted plastic covers and sit down on our padded seats, very near the front (as the 8:00 concert started on Moroccan time at 8:45 pm).  The concert was “Ode to Sufi Women” (of course in French) and included poetry readings in French of the sufi mystic Rumi (as far as my limited French could tell) and singing by two fine women vocalists accompanied by classical instruments and a choir of women with various drums. 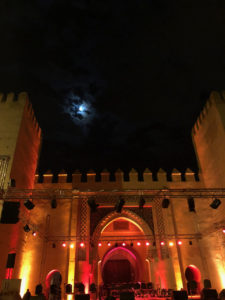 It is magical sitting in such a setting.   It is at this concert that we met our New Zealand friend and heard stories about life in Fes and the joys of raising two adopted Berber children.  The most surprising information was that there has been a sharp rise in teenage pregnancies due to the universal use of cell phones, allowing for the first time arranged meetings of the sexes without the pall of parental authority. 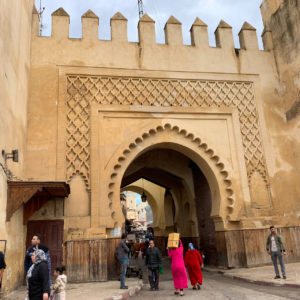 Fes seem to me to have one of the most extreme differences in living conditions between the poor in the medina and the wealthy in the new part of town.  Of course, the shanty towns of India and the elite residences of the educated upper classes also display a huge disparity.  But there is something about the French overlay here, in signage and language usage, and the mixture of traditional dress and very modern attire in both ends of the residential spectrum, that make it seem more surprising.  Our guides all told us that you can’t tell the wealth of a family from the outside of their homes in the Medina; centuries have taught people to play down the exterior looks of their homes and only display their wealth inside.  That may be true but wealthy people are still living with donkeys and ponies up and down their streets for transport and experience more difficult access to the accoutrements of the 21st century.

Our Riad in Fes, the Salam Fes, located inside the beginning of one part of the huge medina is magnificent — my image of the palaces of the Arabian nights, elaborate tilework, high ceilings, stained glass, carved wooden doors and cornices, foundations and pools with water and side alcoves with divans for quiet assignations. 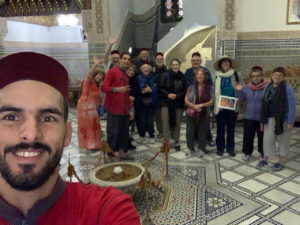 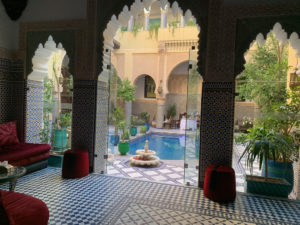 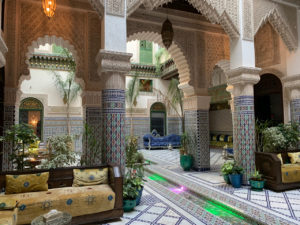 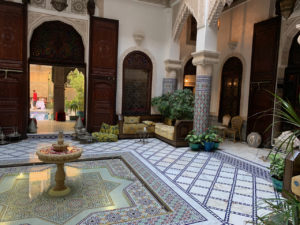 We meet our guide for the rest of our journey as our first guide has a health issue that needs to be addressed.   So we will hear a different perspective, from a different native, as we head down into the Atlas mountain area of Midelt.