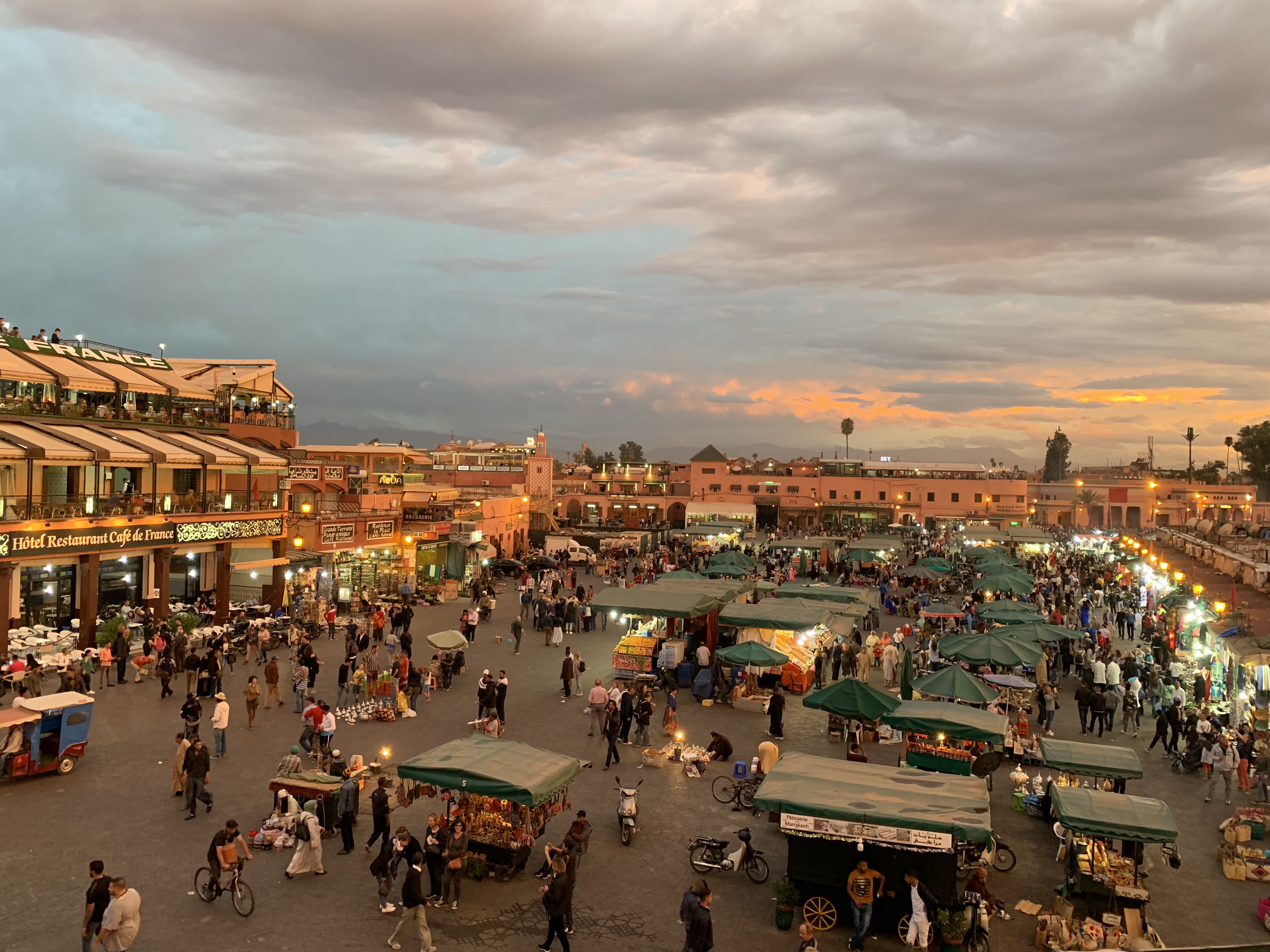 The great square of Jamma El Famma in the heart of the old Medina of Marrakech is one of the great 10-ring circuses on earth.  Here each evening are gathered great sit-down stalls selling on-the-grill Moroccan cooked meats, some stands selling fresh fruit juices and others selling dried fruits, and small and large circles of drumming musicians and story tellers, around which are gathered attentive locals and a few foreign visitors.  Scattered among the brightly lit food stalls and the darker group circles are the individual hawkers with their wares on the ground around them selling lamps casting filigree shadows, metalwares, woven hats and scarves, fruit and even the itinerant snake charmer.  Around the borders of the square are restaurants, banks, a pharmacy and shops selling everything from shoes to underwear.  Horse drawn carriages travel across and around, some well decorated for tourists and others designed for heavy manual transportation but both requiring attention to what is deposited by the beasts of burden on the walking stones below ones feet. 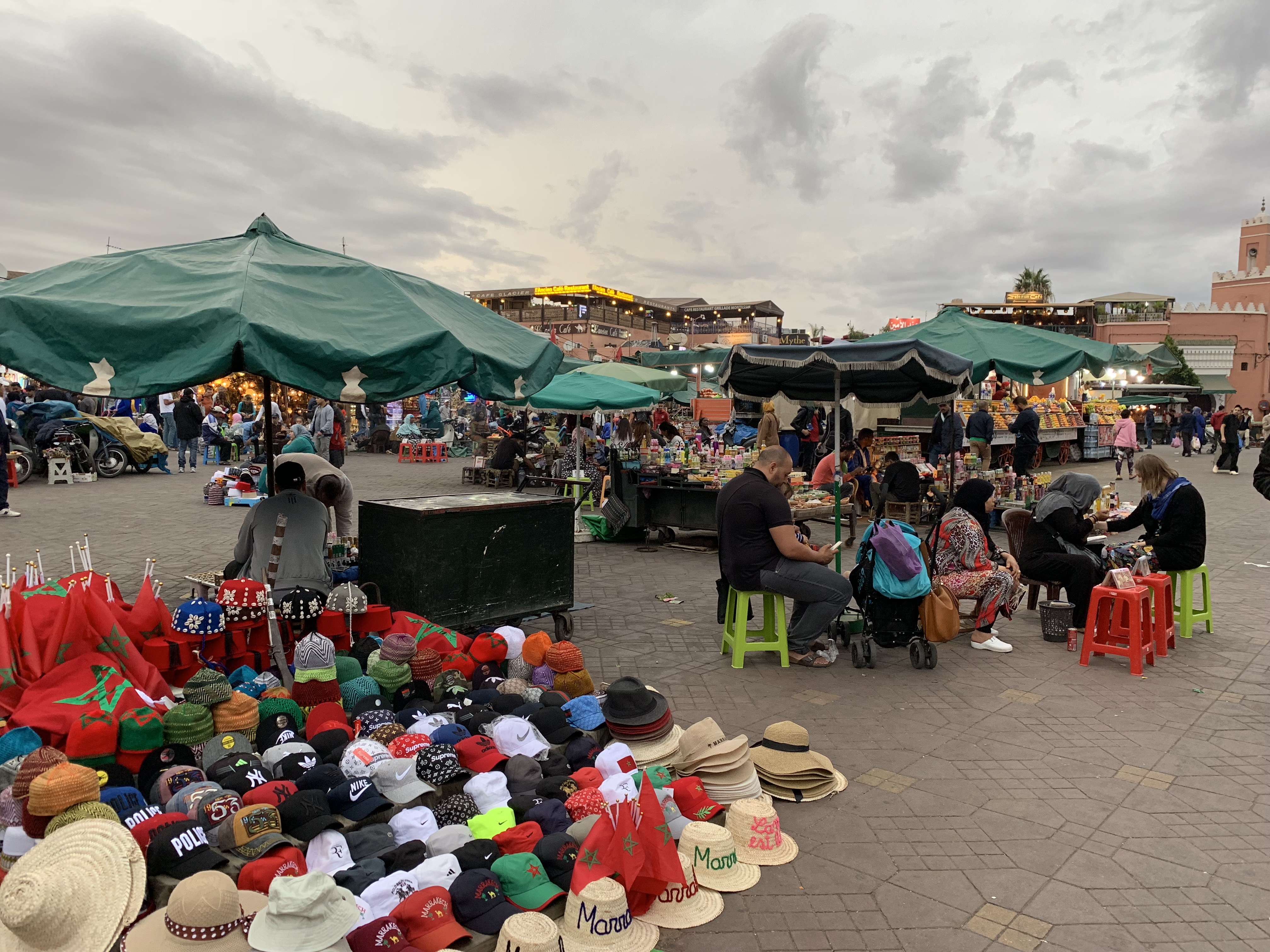 That is all just the outside of the medina.  Inside its narrow crowded by-ways are the lanes of shops, some covered with canvas across the top, many filled with tourist wares but others servicing the needs of the local inhabitants, hardware shops, small food stores, bakeries, shoe and clothing merchants.  Small restaurants are nestled in nooks and crannies and sometimes donkeys as well as bicycles and the obnoxious fume-emitting motorcycles that are a main form of transportation here despite the crowds on the same routes.  There is a small square filled with spice merchants together with made-for-tourists wooden camels and donkeys, another of antique dealers, a lane specializing in leather goods of handbags and tooled ottomans, and section of a few more high-end shops with trendy clothing. 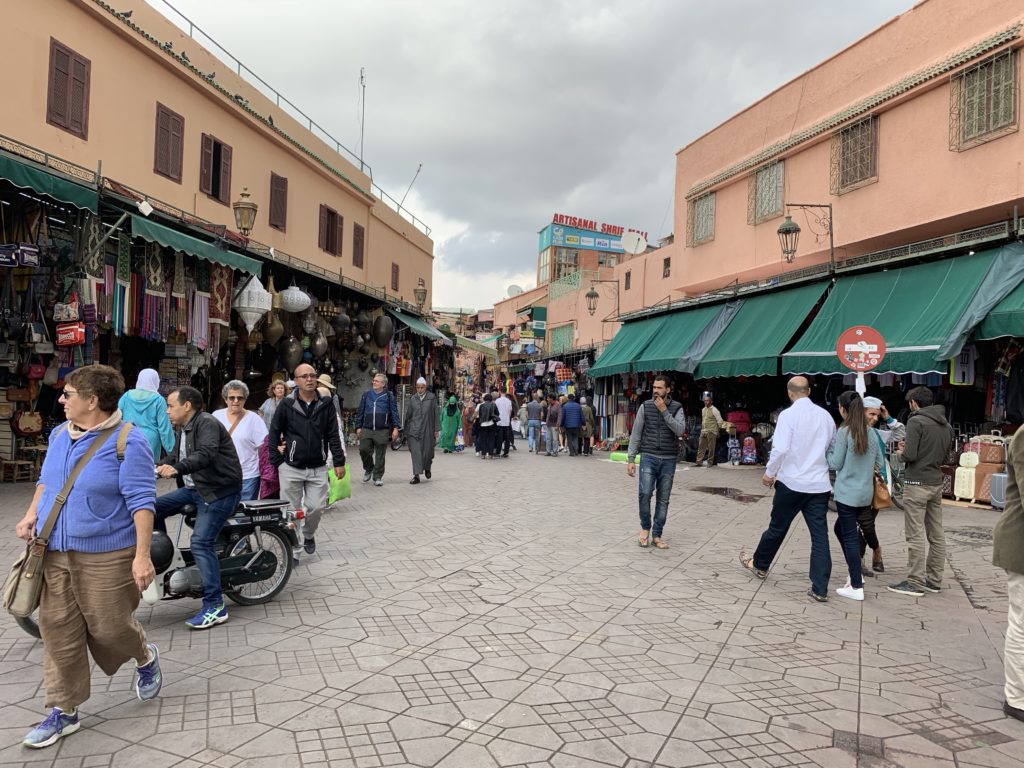 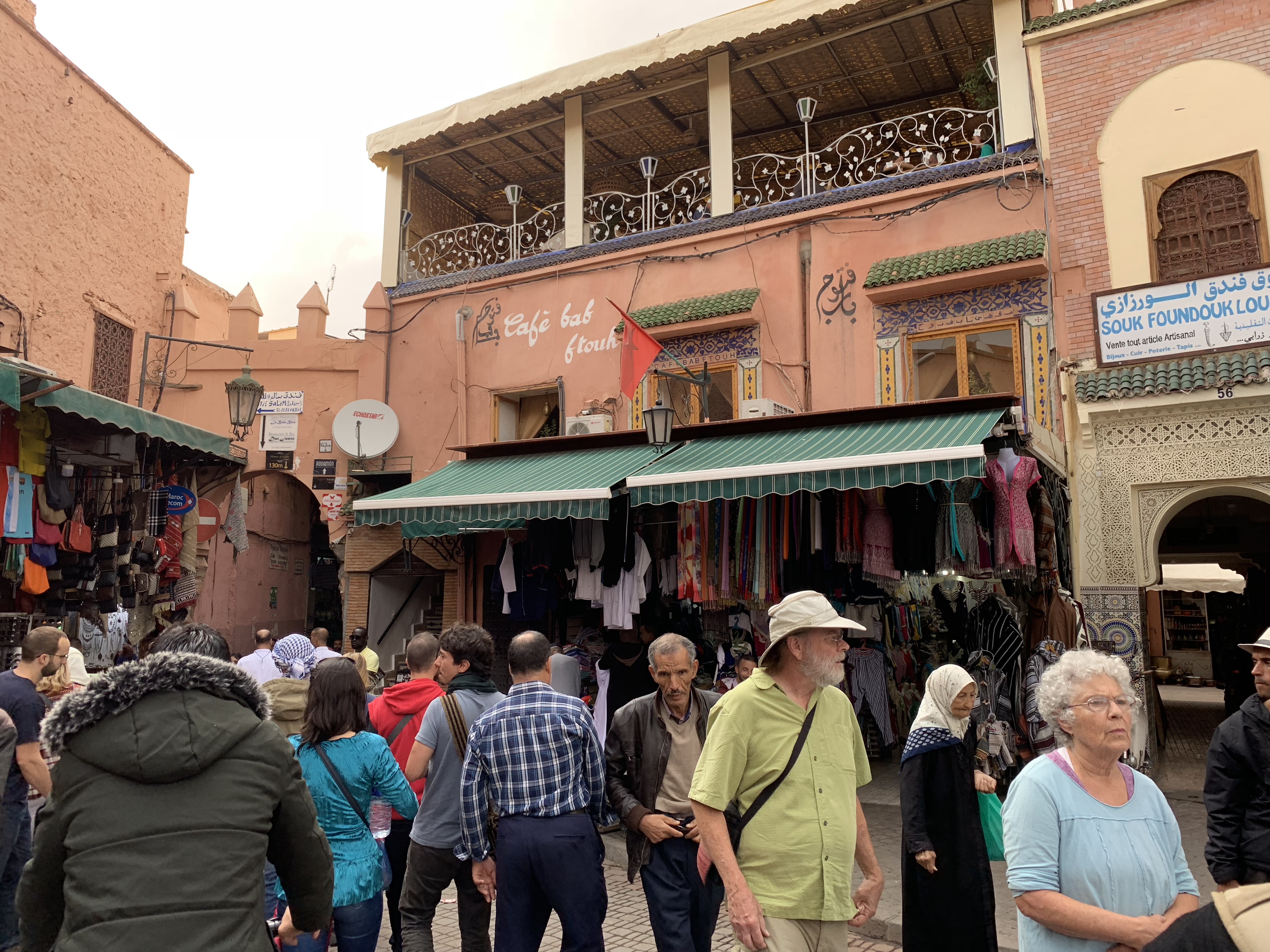 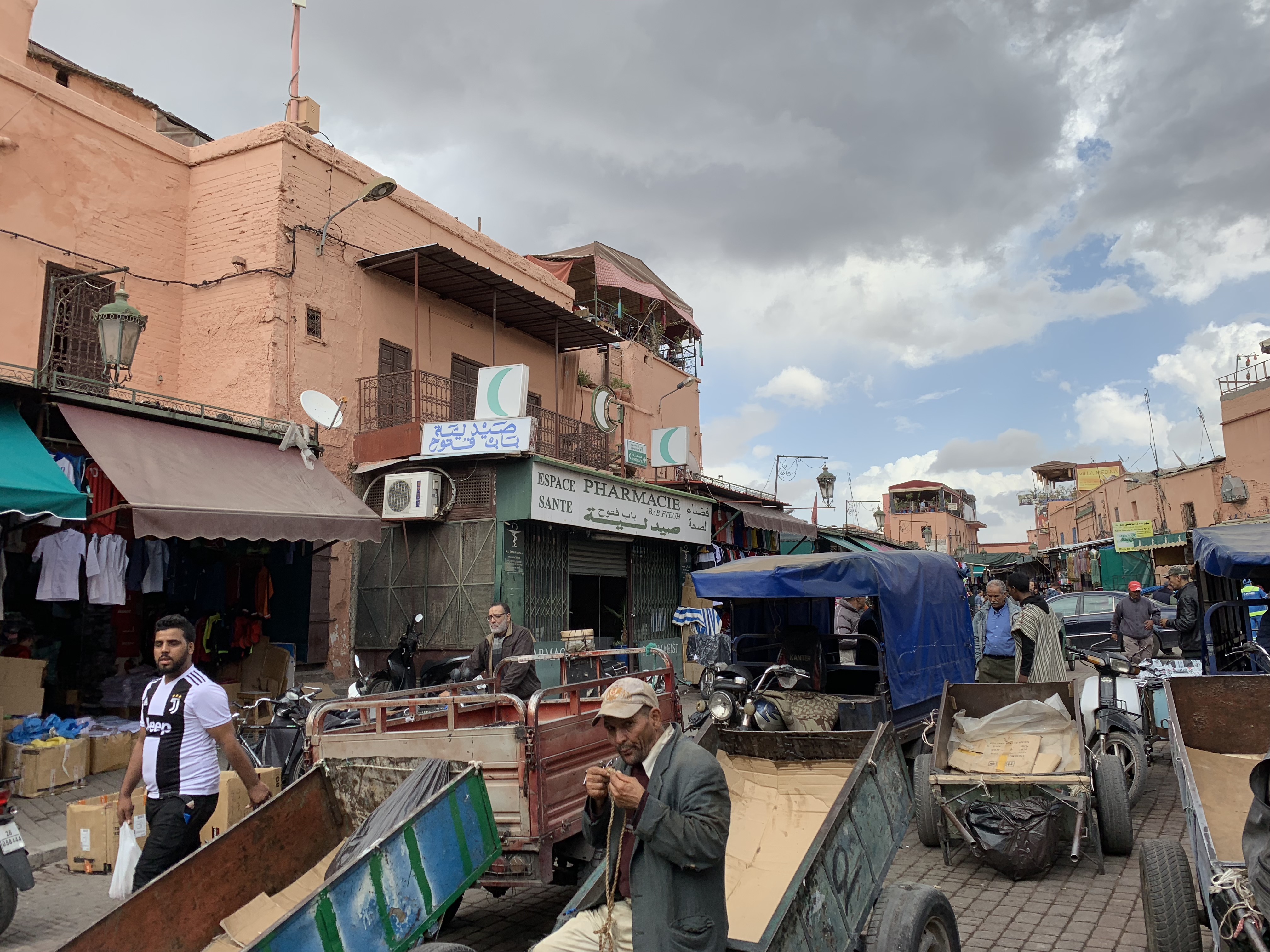 Family homes have been turned into bed and breakfast hotels or Riads, both basic and elaborate.  The Riad Hamdane where we first stayed was peaceful and enjoyable with a center courtyard and a rooftop eating area; the second place where some of us stayed, the Riad Andalla Spa, was elegant and beautiful, with Marge/Rae in a gold palace of a bedroom and myself in an all white Arabian nights dream. 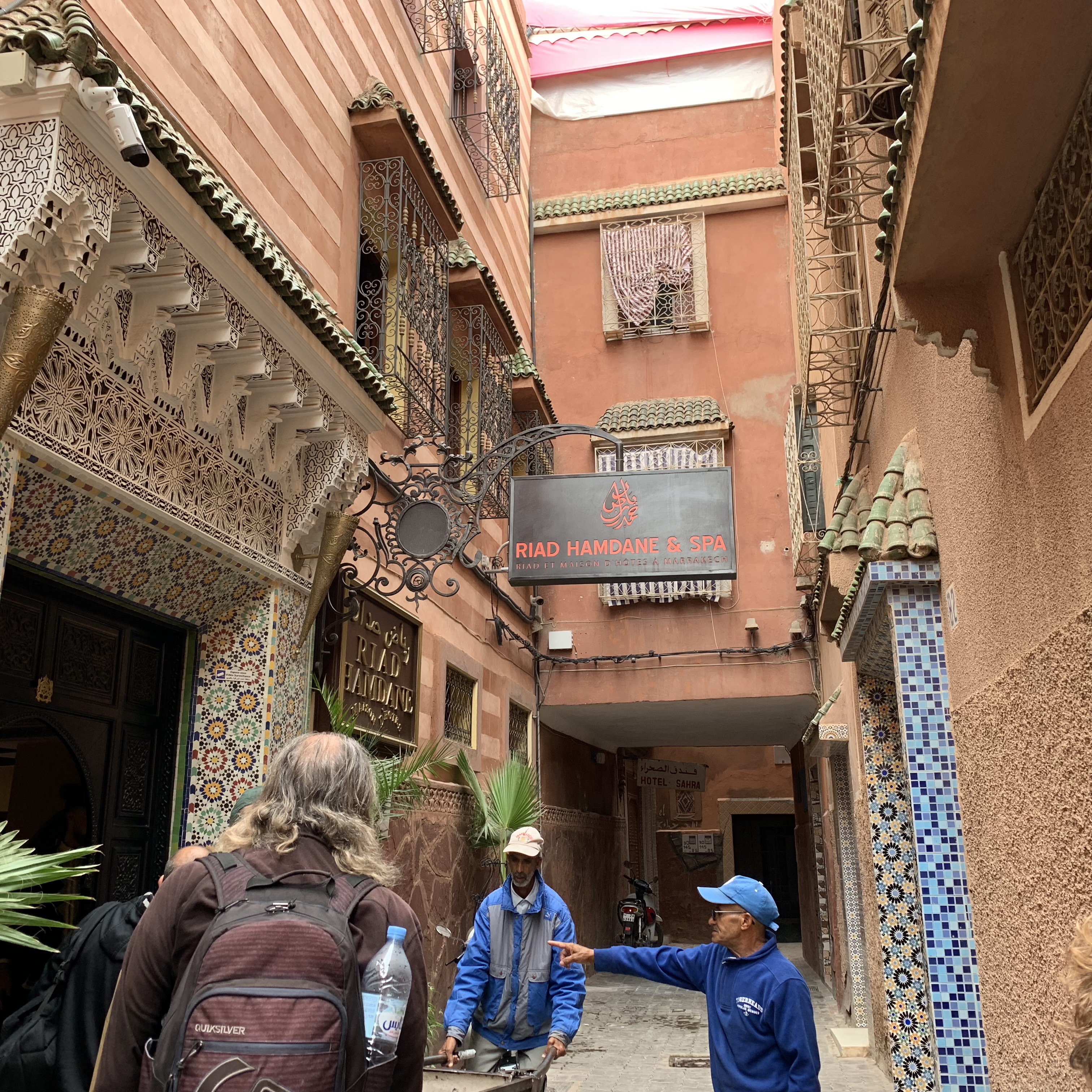 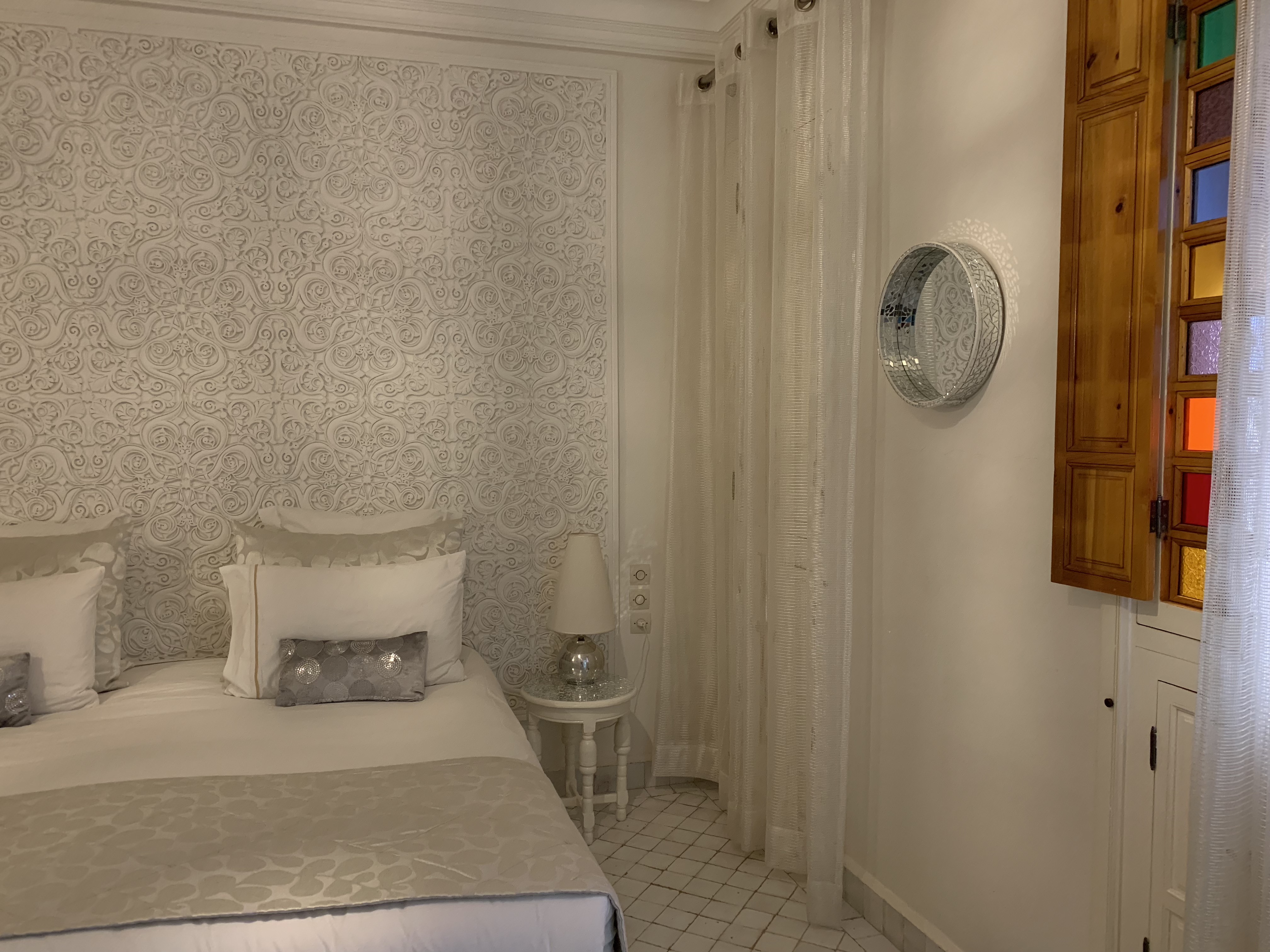 And many kinds of museums.  Carol and I went to a private rag rug museum in a magnificent old renovated home, the collector happy to tell us the story of some of the wonderful specimens he found of this art form of rural life, and a new Women’s Museum displaying artifacts and arts by and about Moroccan women. 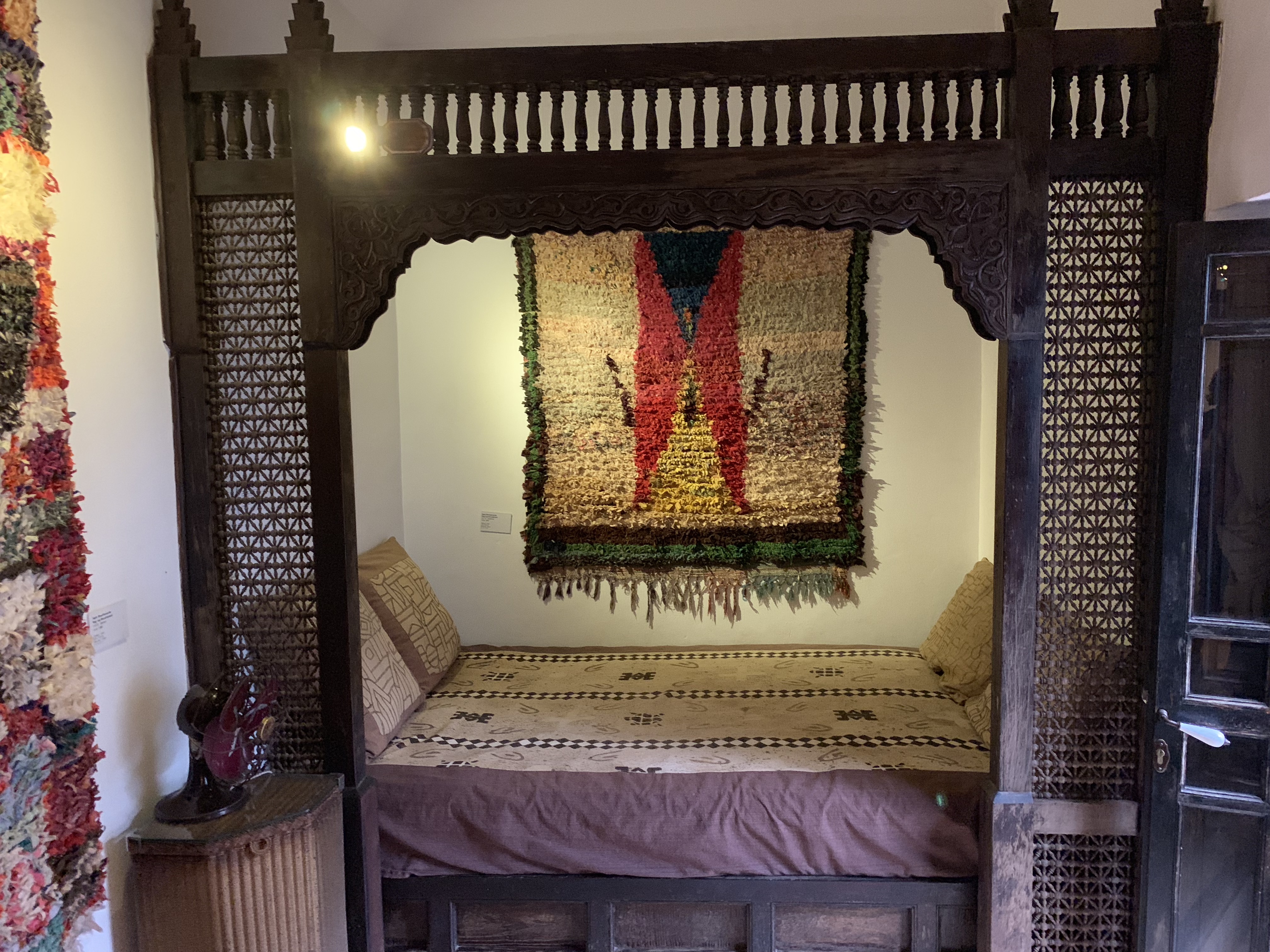 March, Rae and I walked one morning through to the City walls enclosing the Medina, right inside of which was the Moroccan tannery, still functioning, filled with men carrying skins in and out, and far less odorous then its counterpart in Fes.  I asked about this and was told — this is a Berber tannery which is different — but in what way I do not know although it did not smell as offensive. 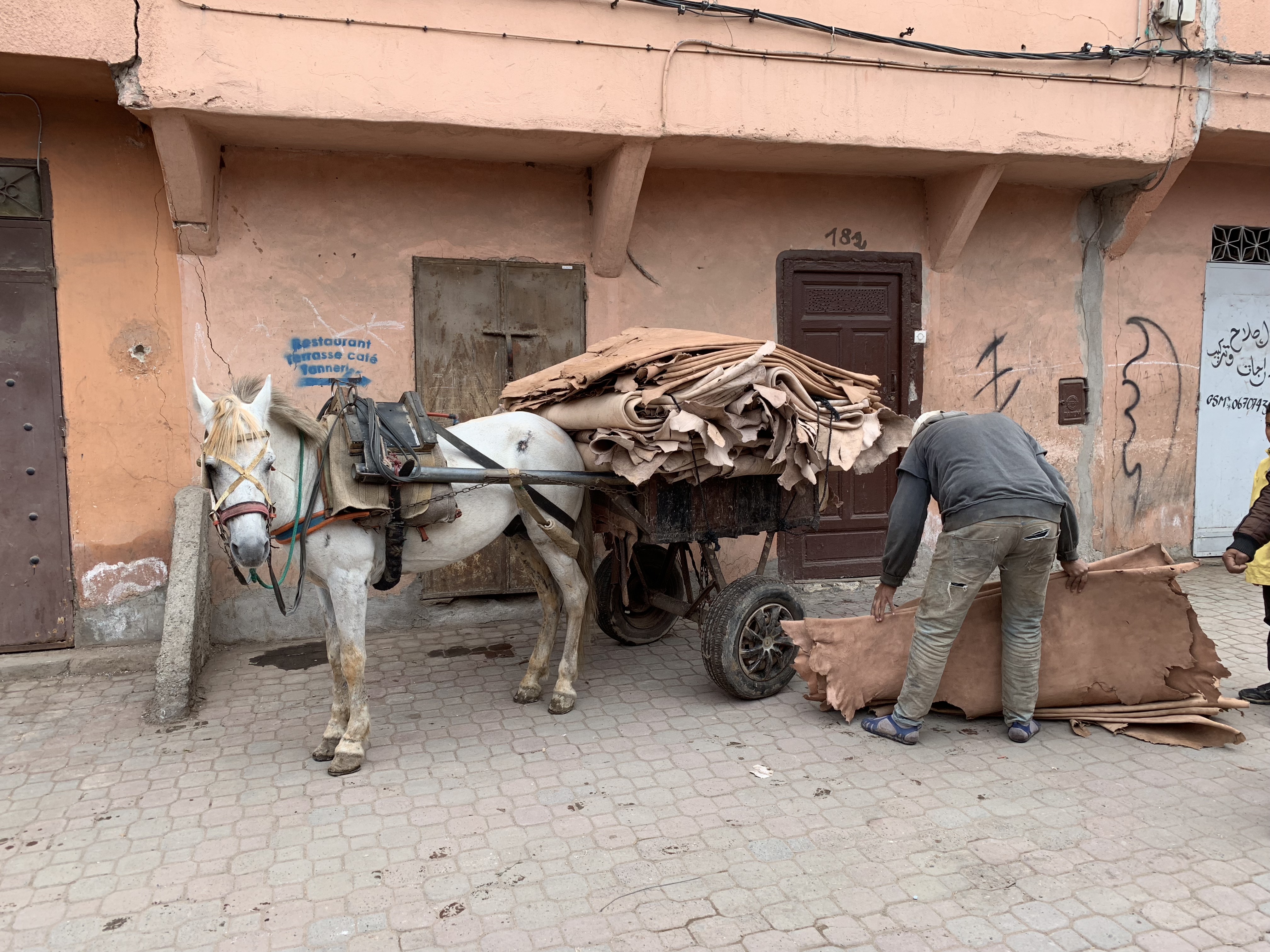 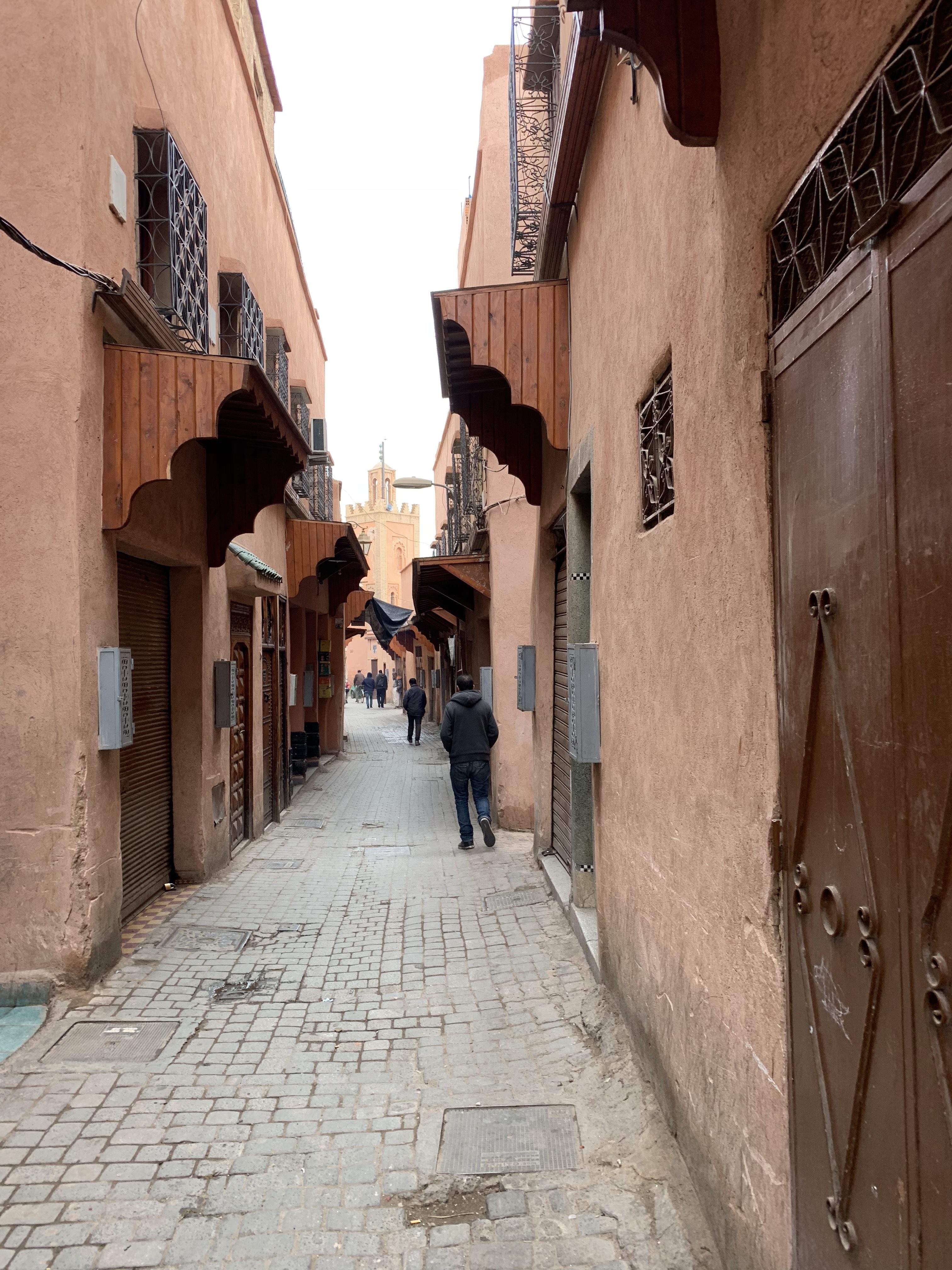 As a group we visited the Bahia palace, the result of greed and the usurping of power at the end of the 19th century.  Leaving lasting beauty at the expense of the populace. 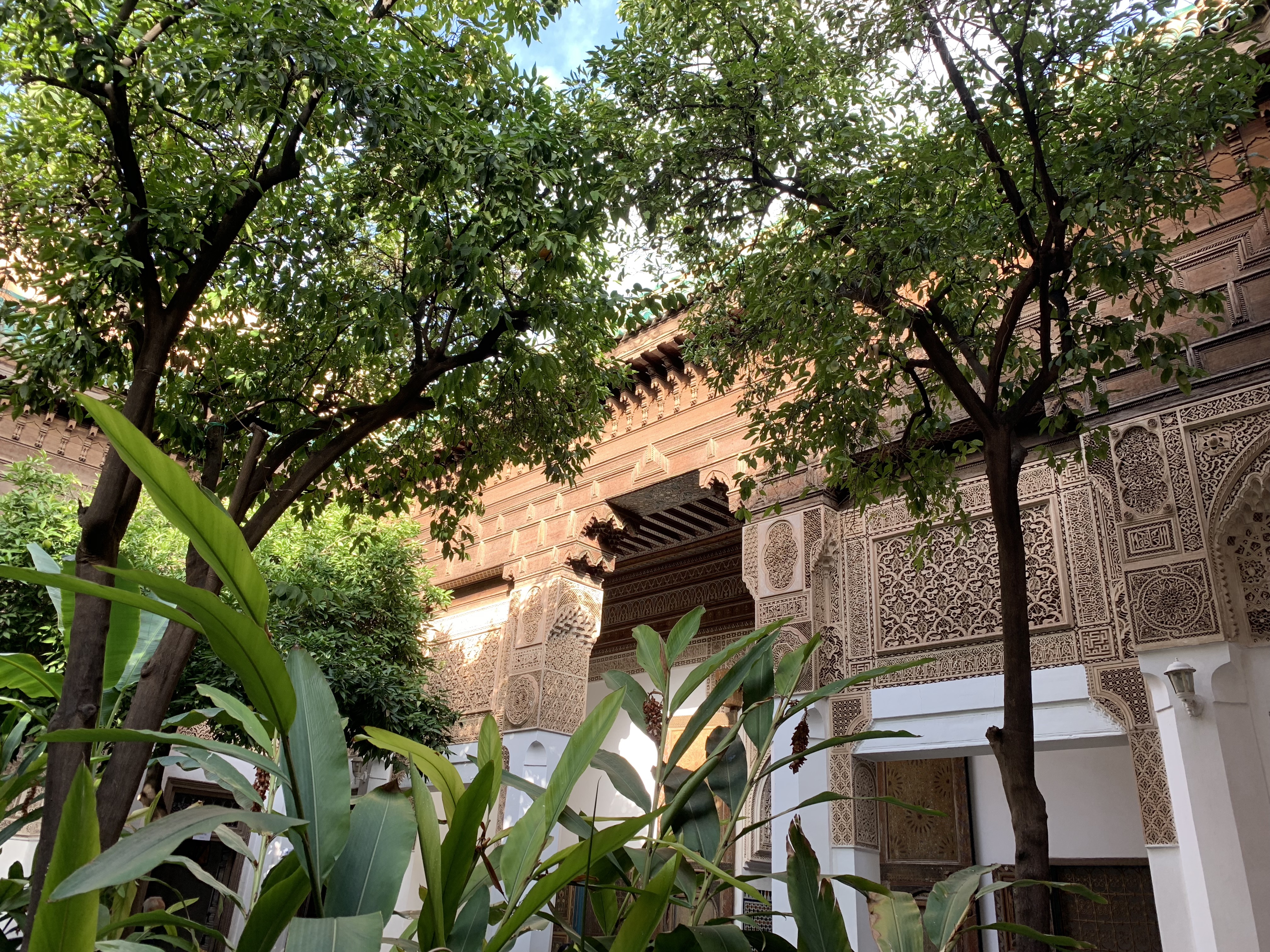 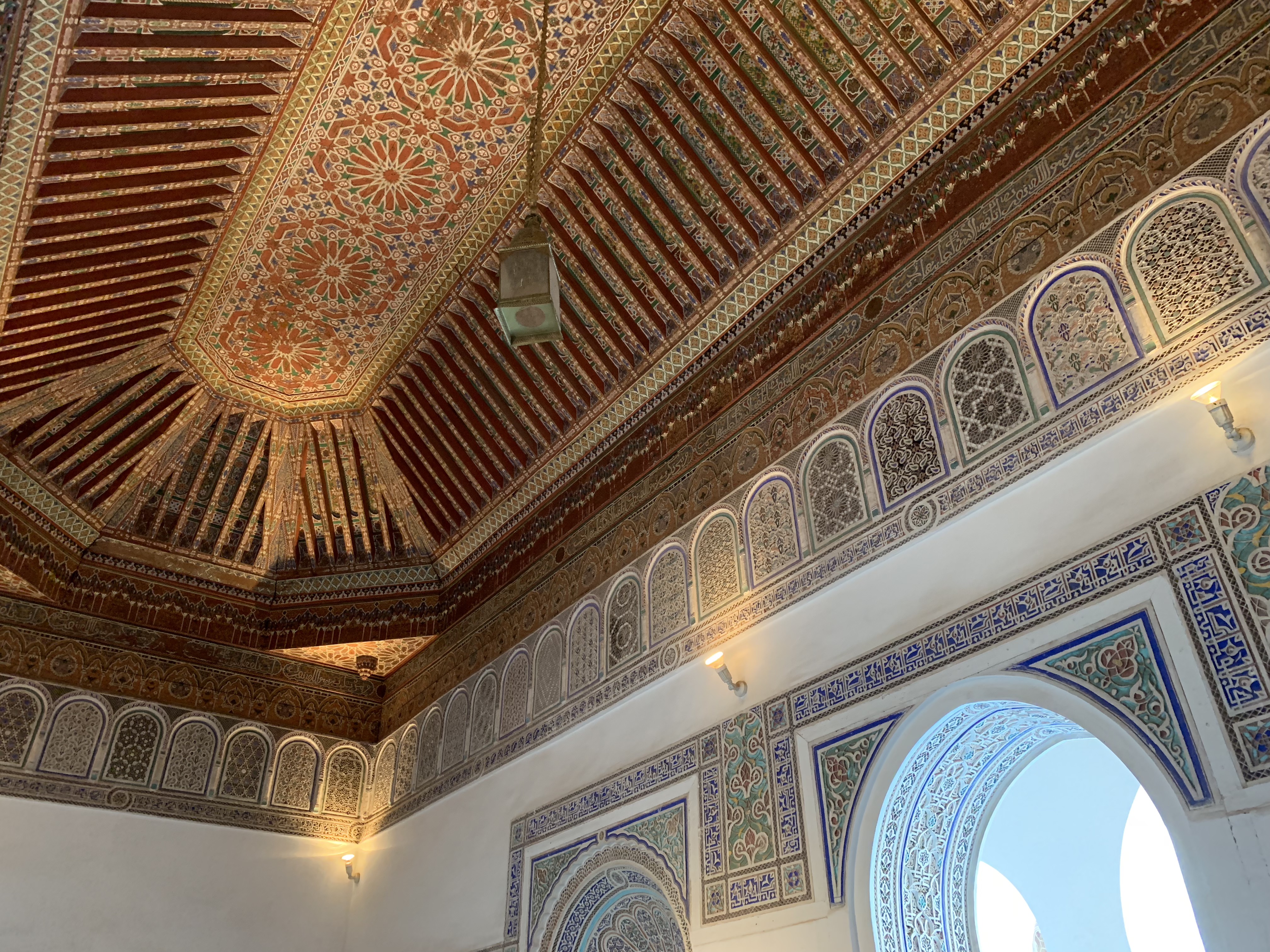 Separately we visited the great Marjorelle Gardens and Yves St. Laurent Museum, both the result of preservation efforts by the Parisian designer and his life partner.   Marrakech is a large city, and while we inhabited only its old center, there is as well an ever growing modern metropolis, with apartment buildings and shopping centers, like everywhere in the world. 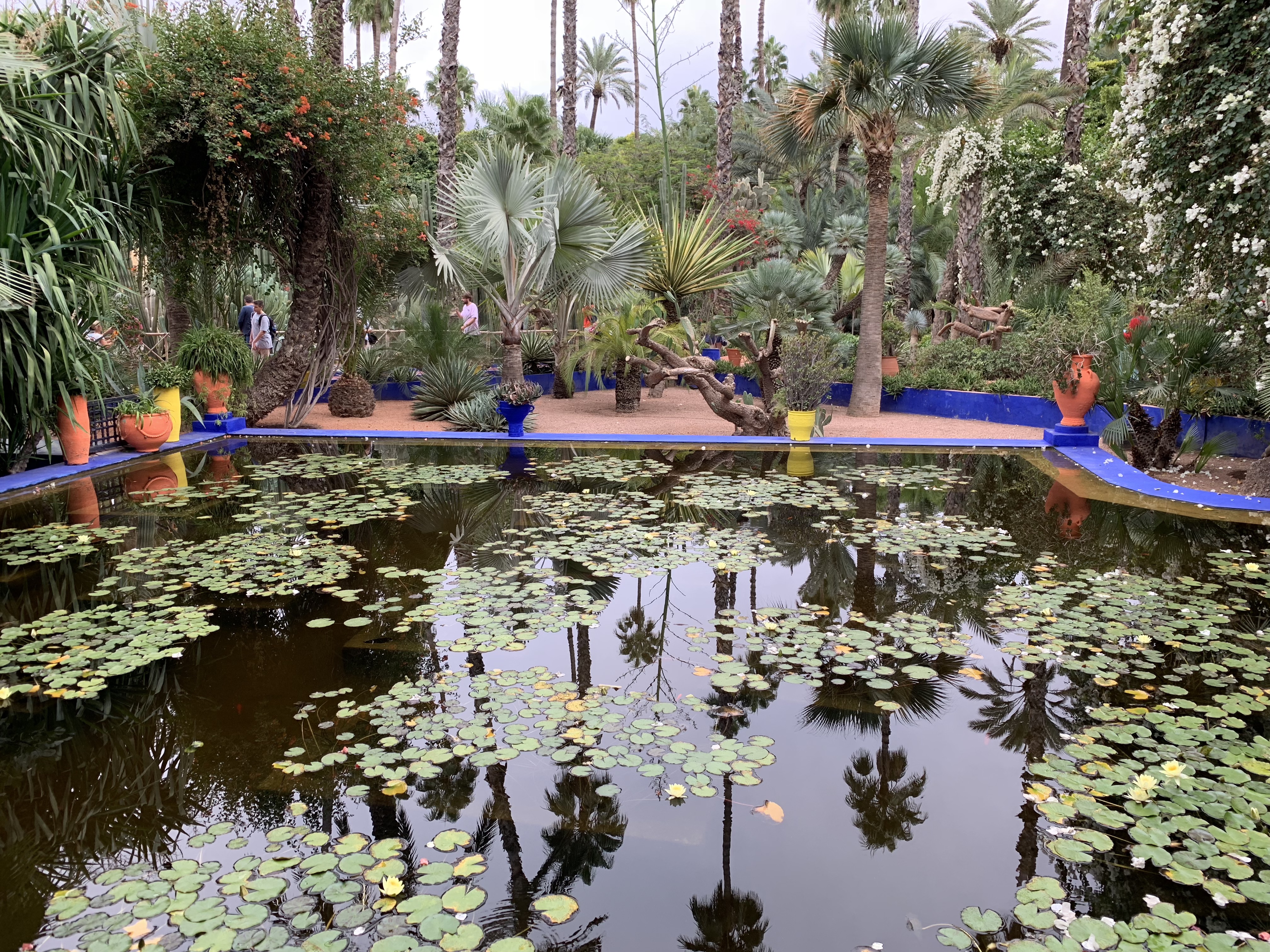 In the Majorelle Gardens trimmed everywhere by Marjorelle Blue accents.

I wonder, of course, what it was like here before the great waves of tourists and imagine less crowds but also less women, although the medina has maintained its shape for centuries, only the wares for sale changing with the tastes of the visitors. 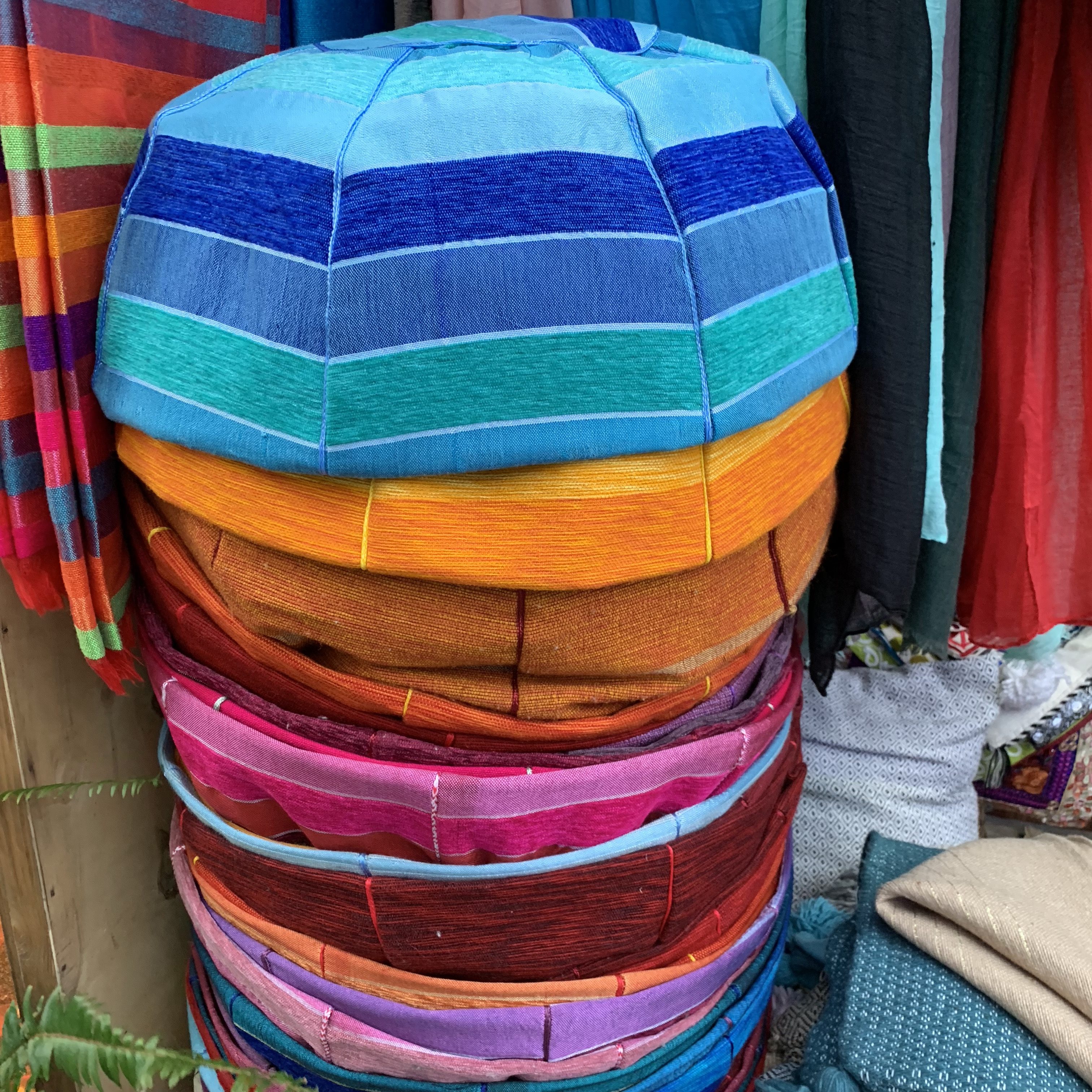 Woven ottomans for the tourists. I bought two which now sit in my grandkids rooms! 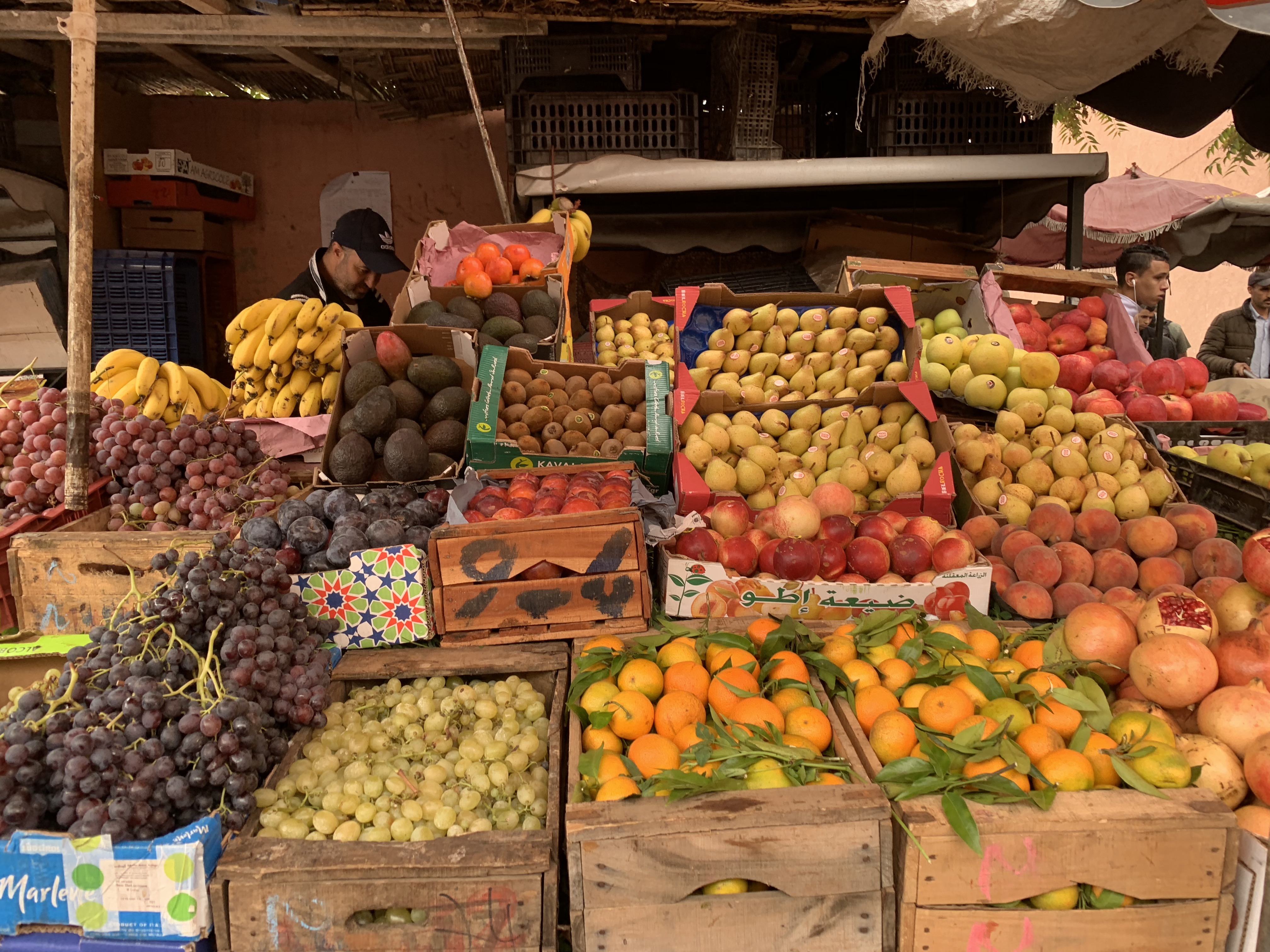 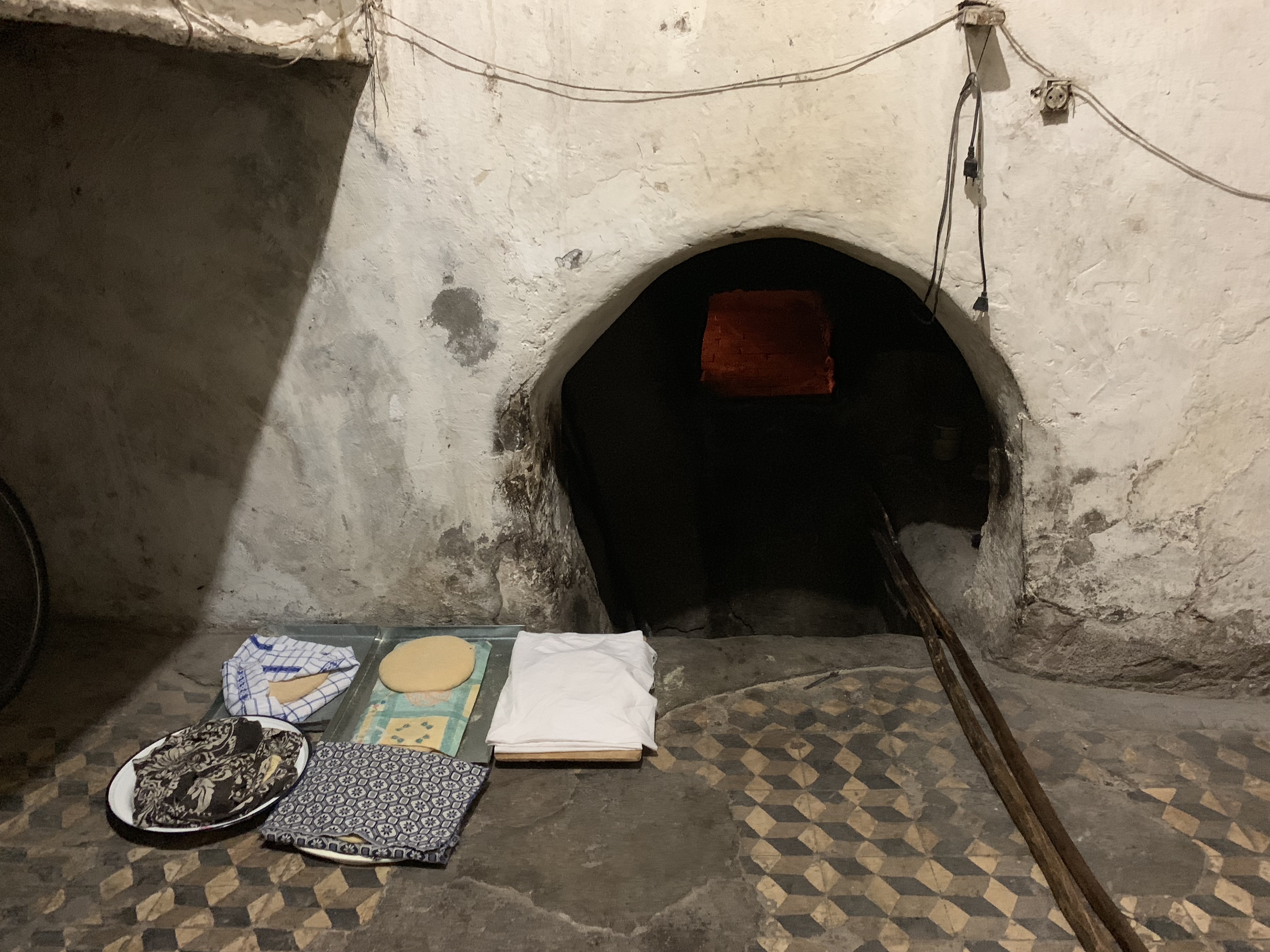 The communal bakery in the old medina 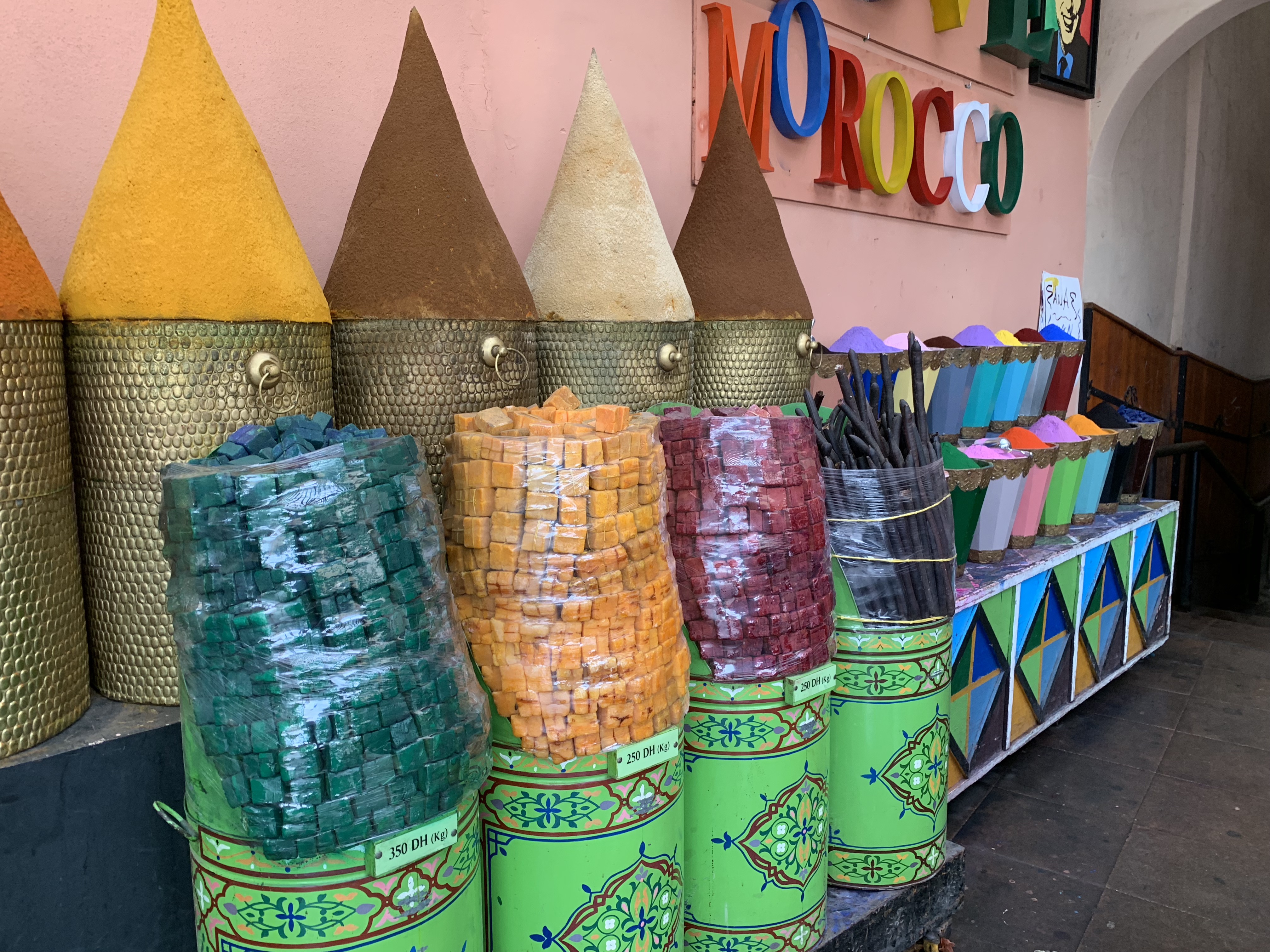 Our last night together in Marrakech was rainy and cold so our outside farewell dinner in the dark square, which was mainly meat, had some drawbacks but, as always, we enjoyed each others company. 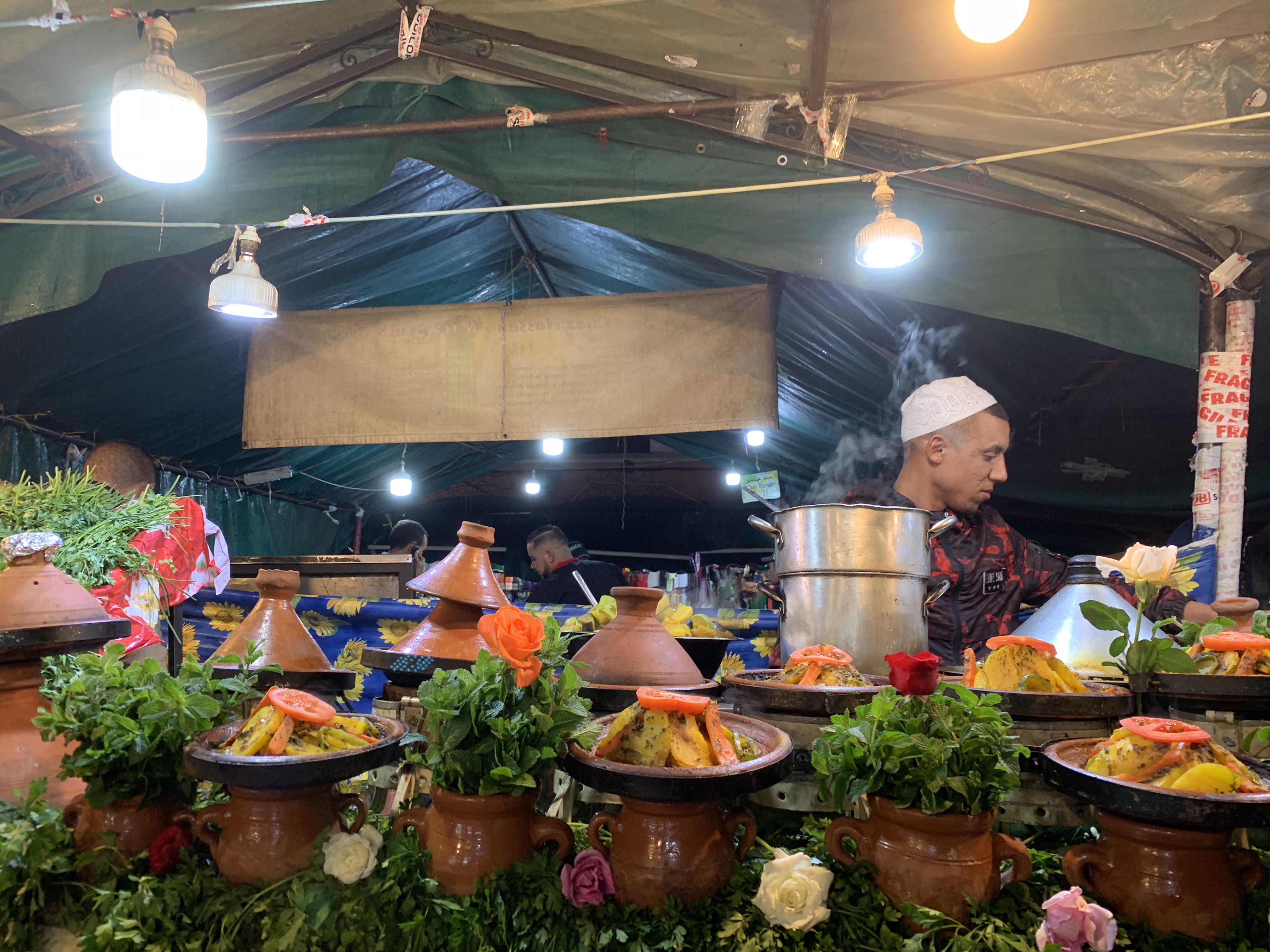 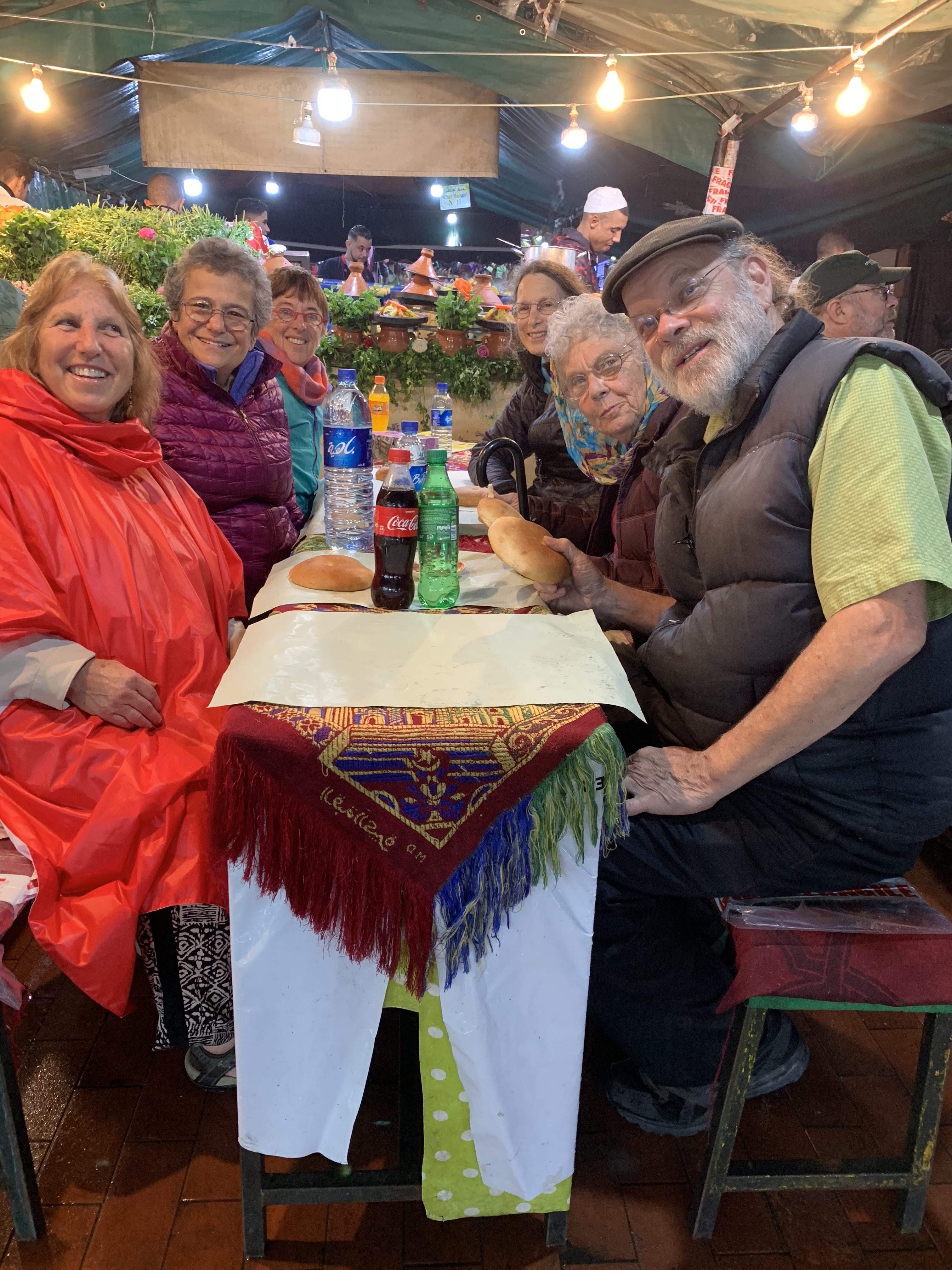 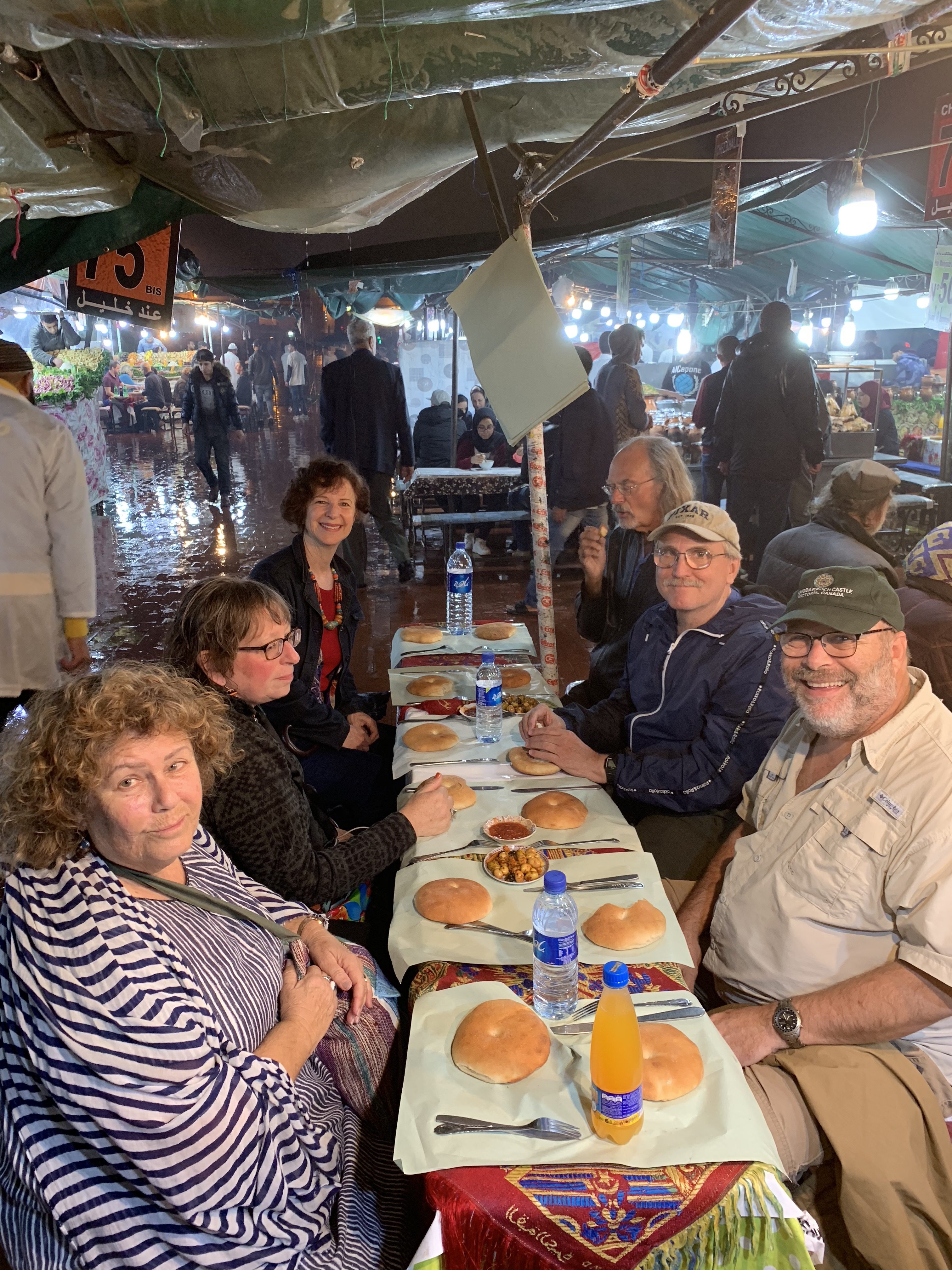 At the end of our journey some of us returned to Marrakech and I spent a day on my own when I visited a large old palace area, EL Badii, mostly ruins but with a beautiful panorama of the old city. 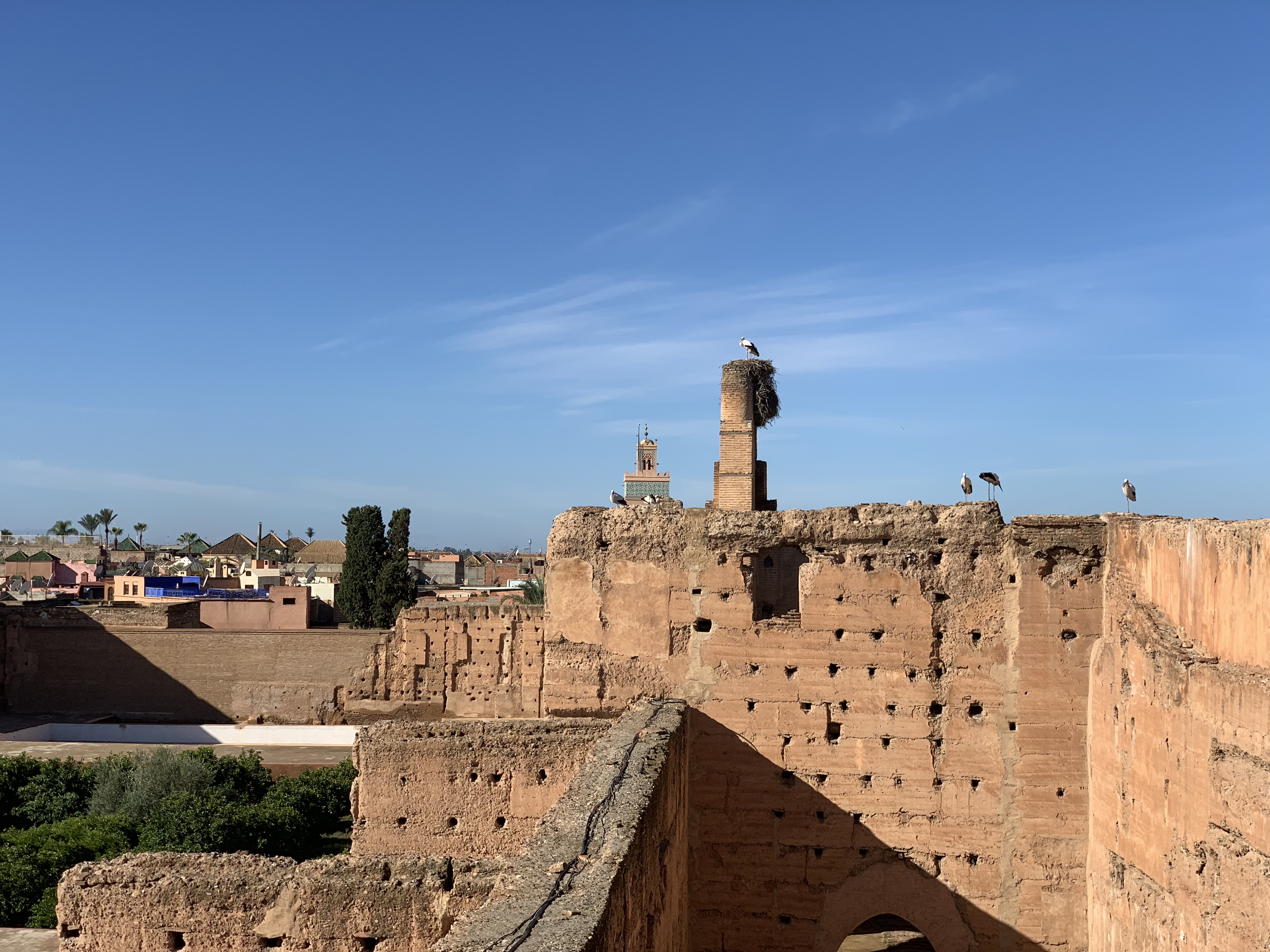 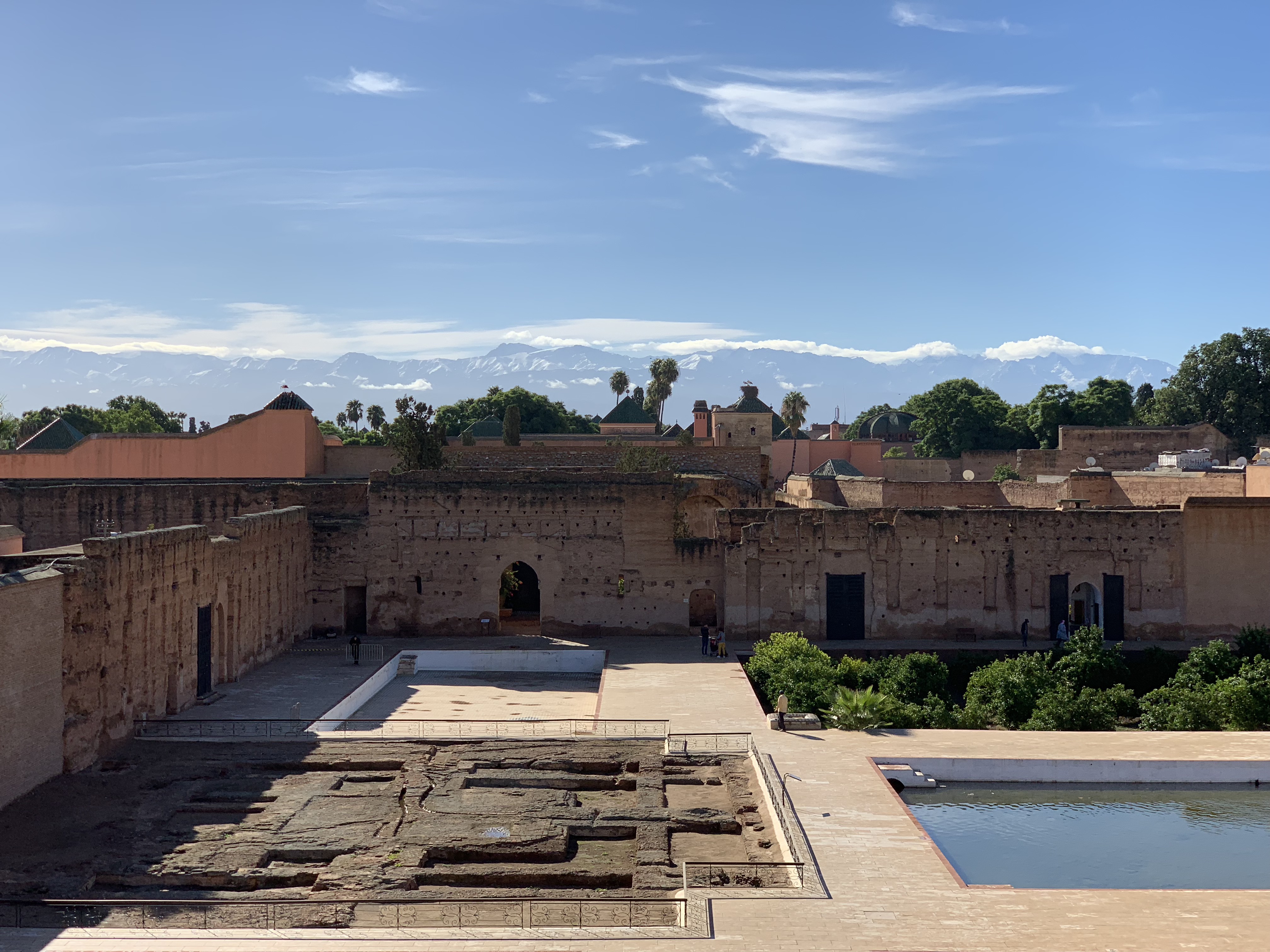 Nearby I visited the ancient Jewish sector with two old synagogues, one just a shell, and the other open mainly for tourists, but it was a good conclusion to this spectrum of experiences that was our journey together. 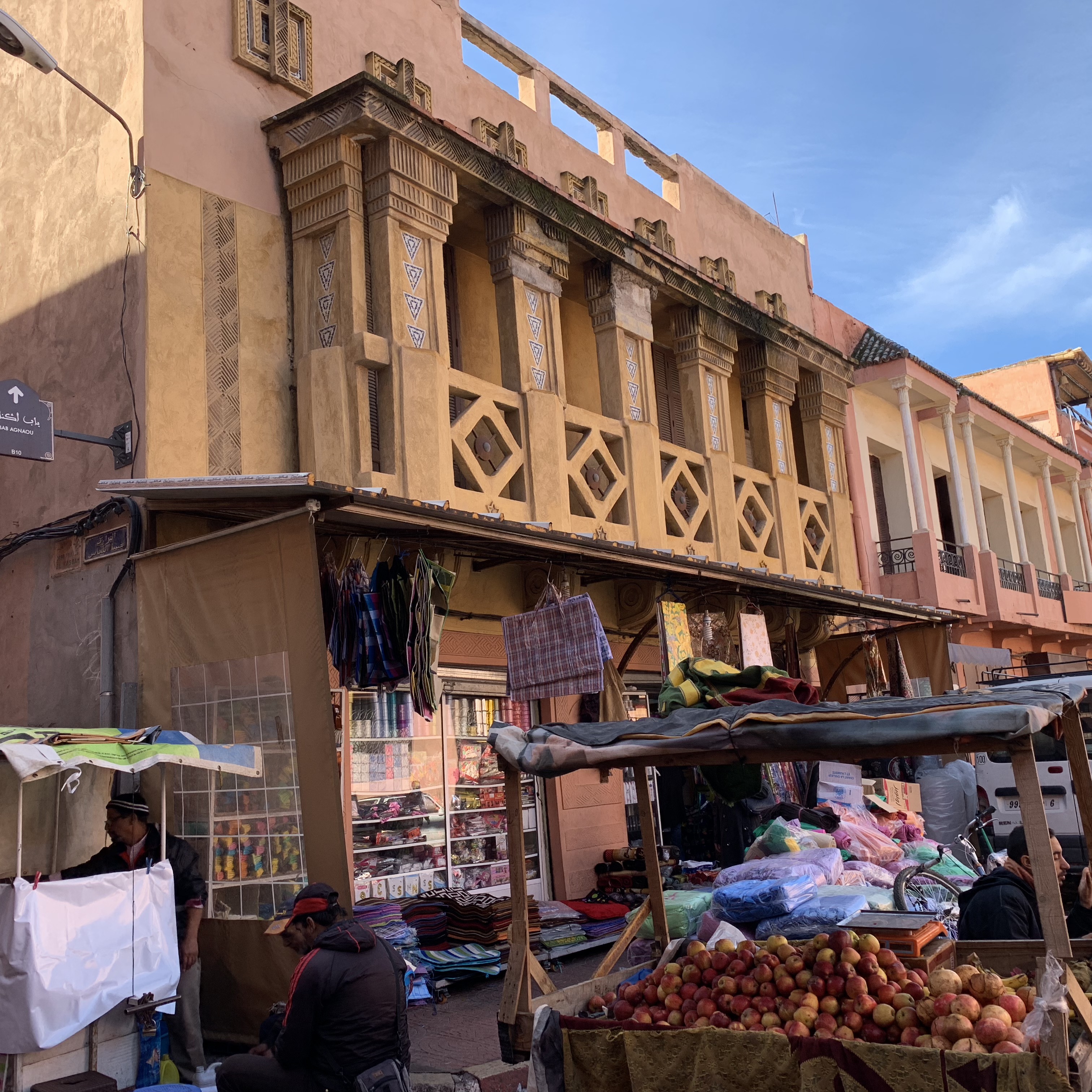 The outside of the former synagogue 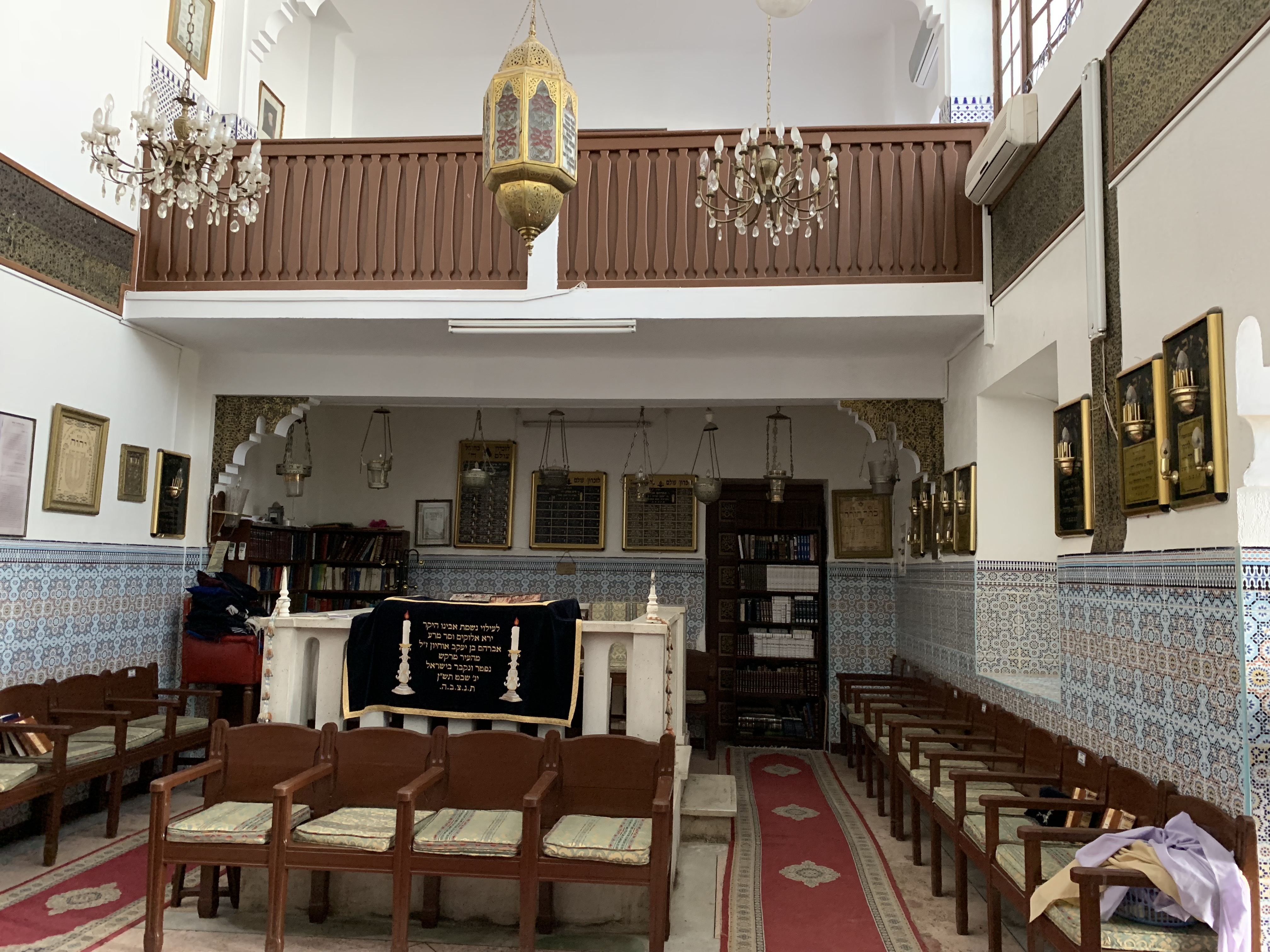