Our last visit as a group is to Essaouria on the sea coast, a North African town masquerading as a French provincial seaport, a favorite resort location for both Moroccans and foreign visitors, short and long term. 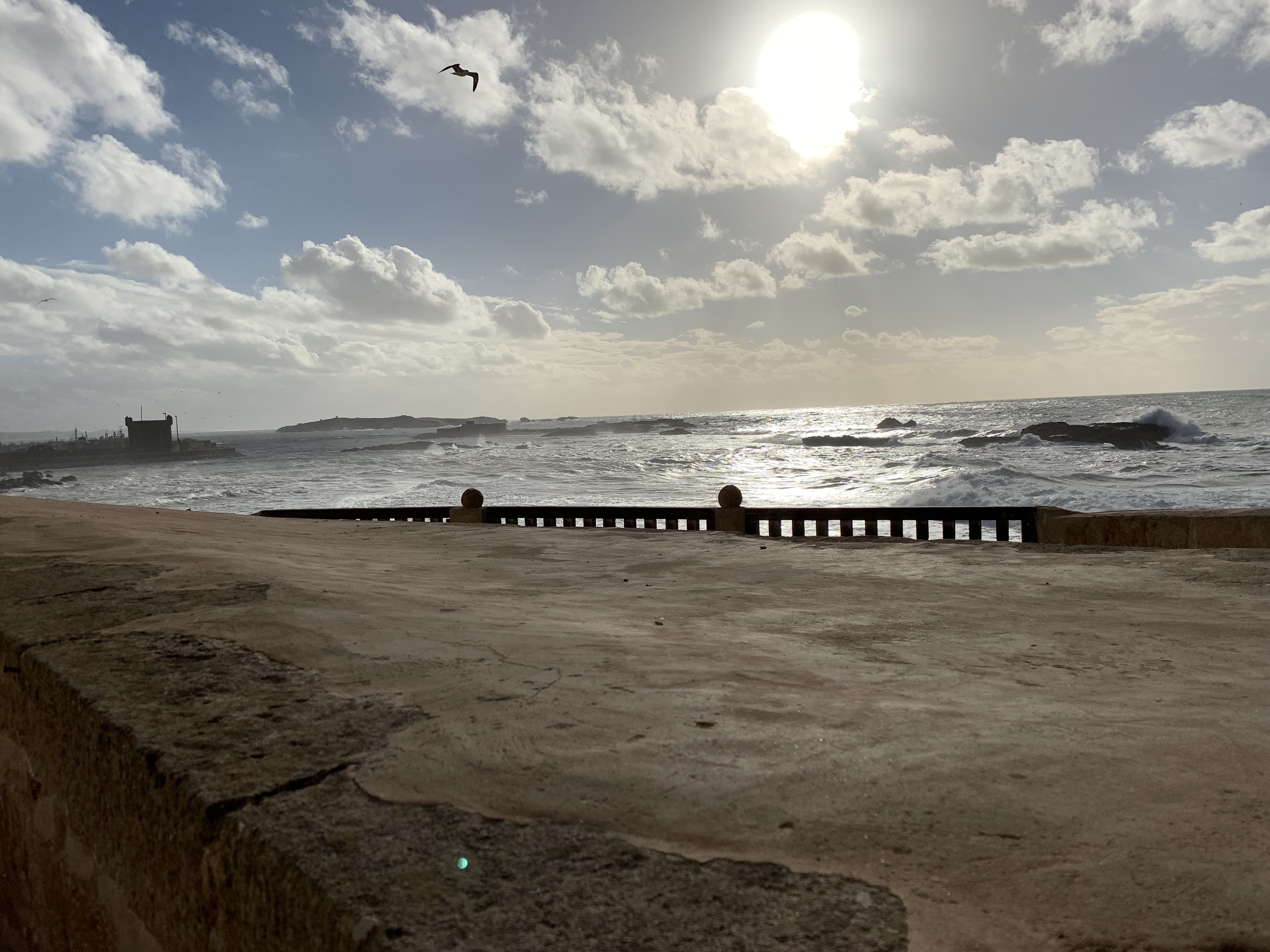 Here is what I see along the flat route from Marrakesh to Essaouria:   Small towns with arched stucco porticos behind which are local shops, donkeys along the road, men sitting in flowing djellabas waiting for a bus with neatly piled stone fences nearby.  Great empty brown fields with dusty green olive trees.  Not a particularly attractive landscape after the inland mountains but one that speaks of an arid climate.

We stop to see how the famous Argan oil is produced in a women’s cooperative:  now a major export and important part of the local economy.  And then we see the sea in front of us, a wide sweep of blue, with fishing boats pulled up on the beaches and docks.  We arrive at a small park and walk through to the center of the old town into the narrower streets of the old medina area and find our lovely small hotel, right in the middle of the busy commercial area. 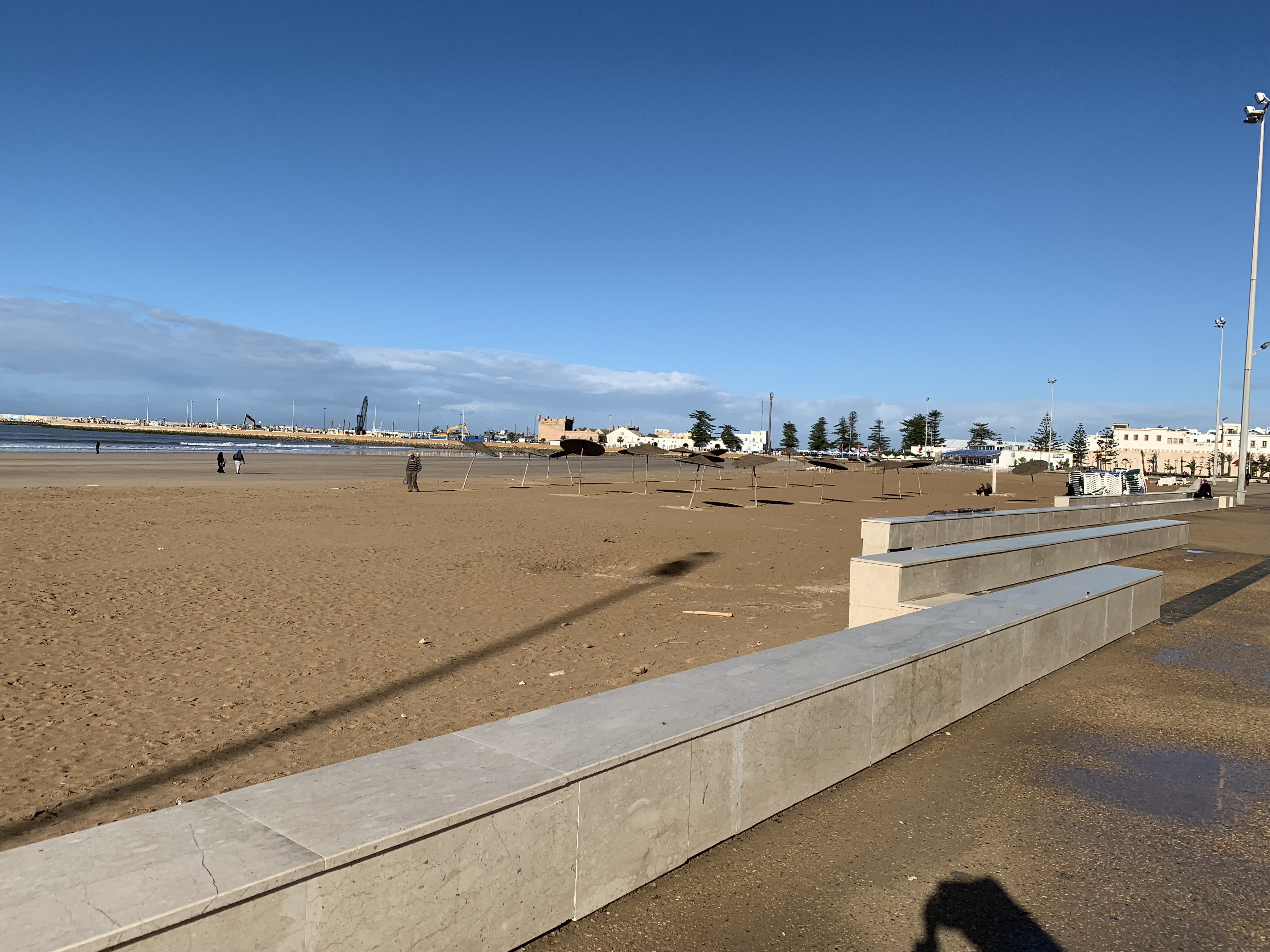 Essaouria is Marrakech in a more manageable form, less people, less crowds, less chaos.  We walk up to the old French ramparts overlooking the roiling sea and then down along streets with marvelous arrays of wares, some of which we have seen throughout this country.  Some shops have beautiful and unique handmade goods. 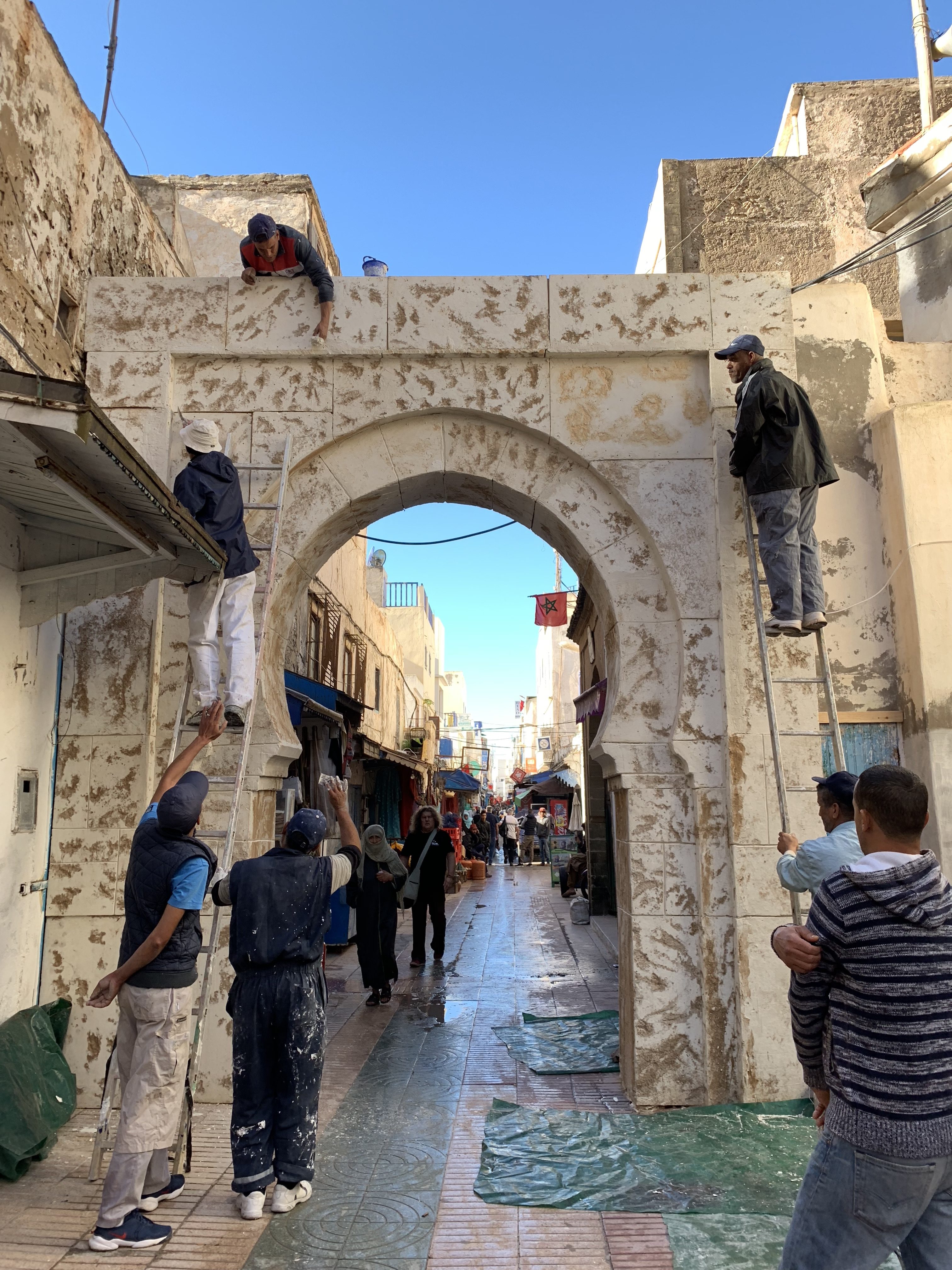 We separate for the day and walk in groups to discover the oldest shopping streets, under arches and around corners, the areas where there are far less tourists and the goods on sale become everyday necessities. 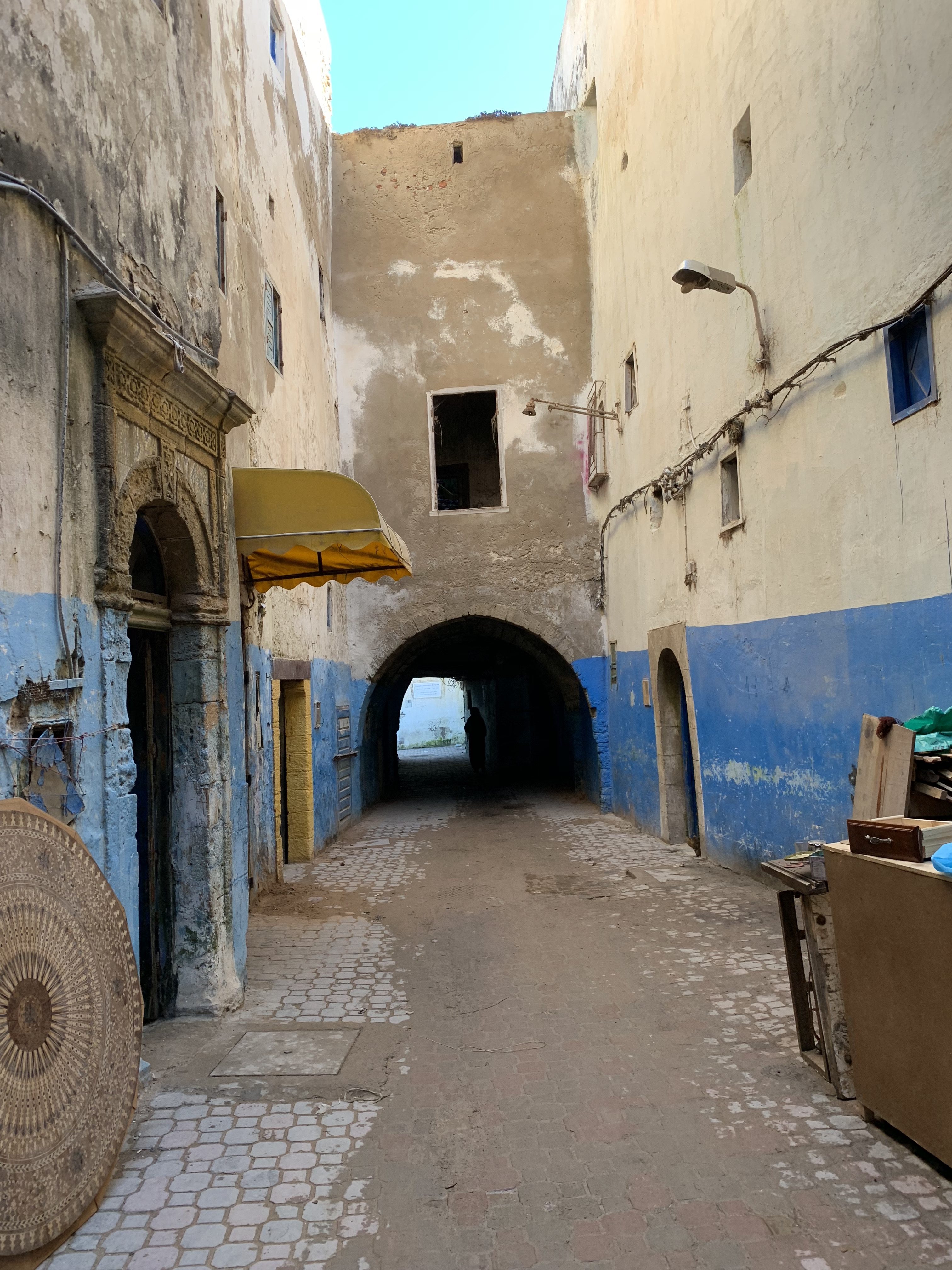 The shops along the sea sell fish right off the boats. 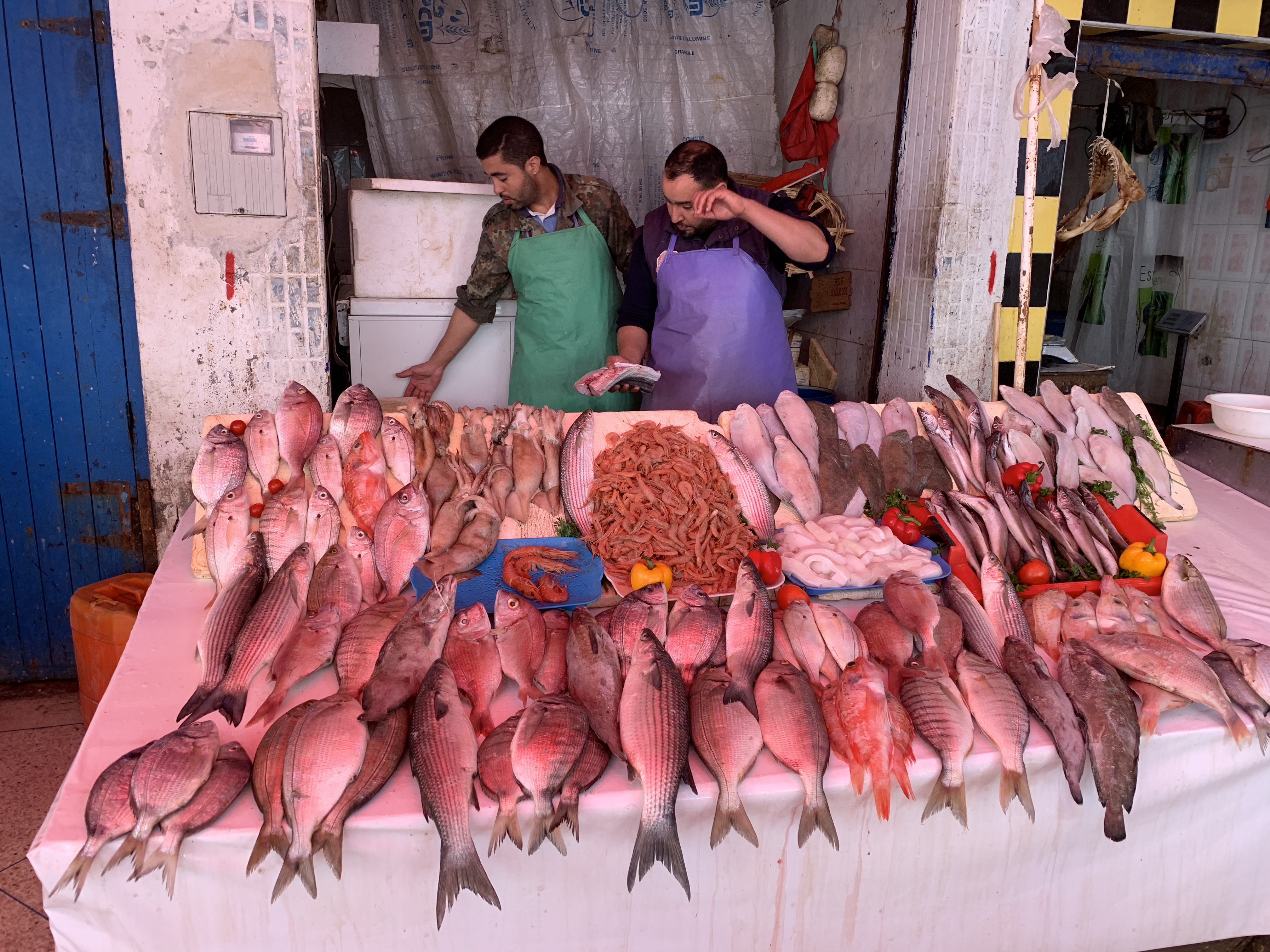 By the wall bordering the ocean are two old synagogues, both restored, one of which we are told is the pilgrimage site for families who are descended from this city and who are now spread all over the world. 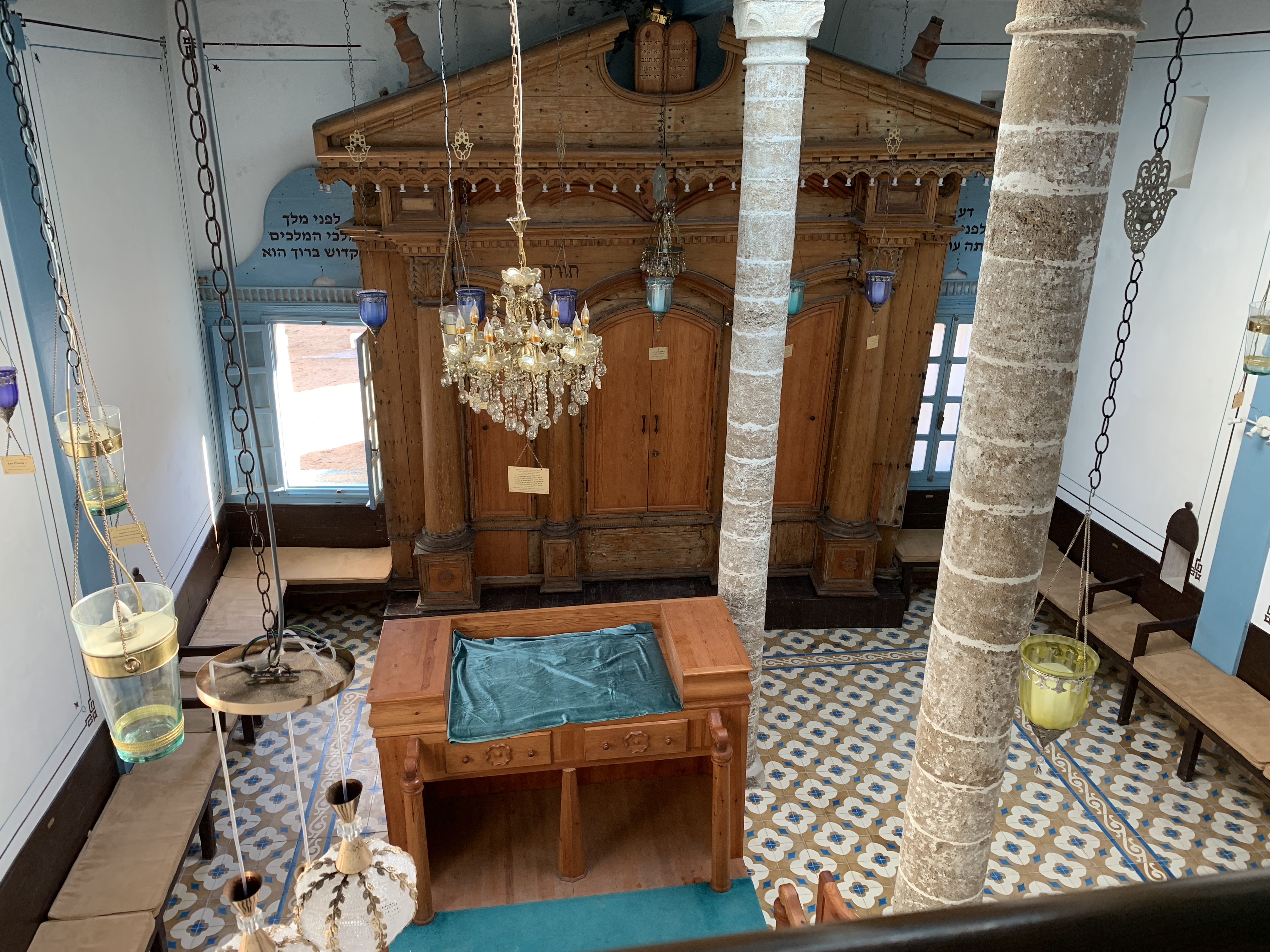 The renovated and unused synagogue now a museum. 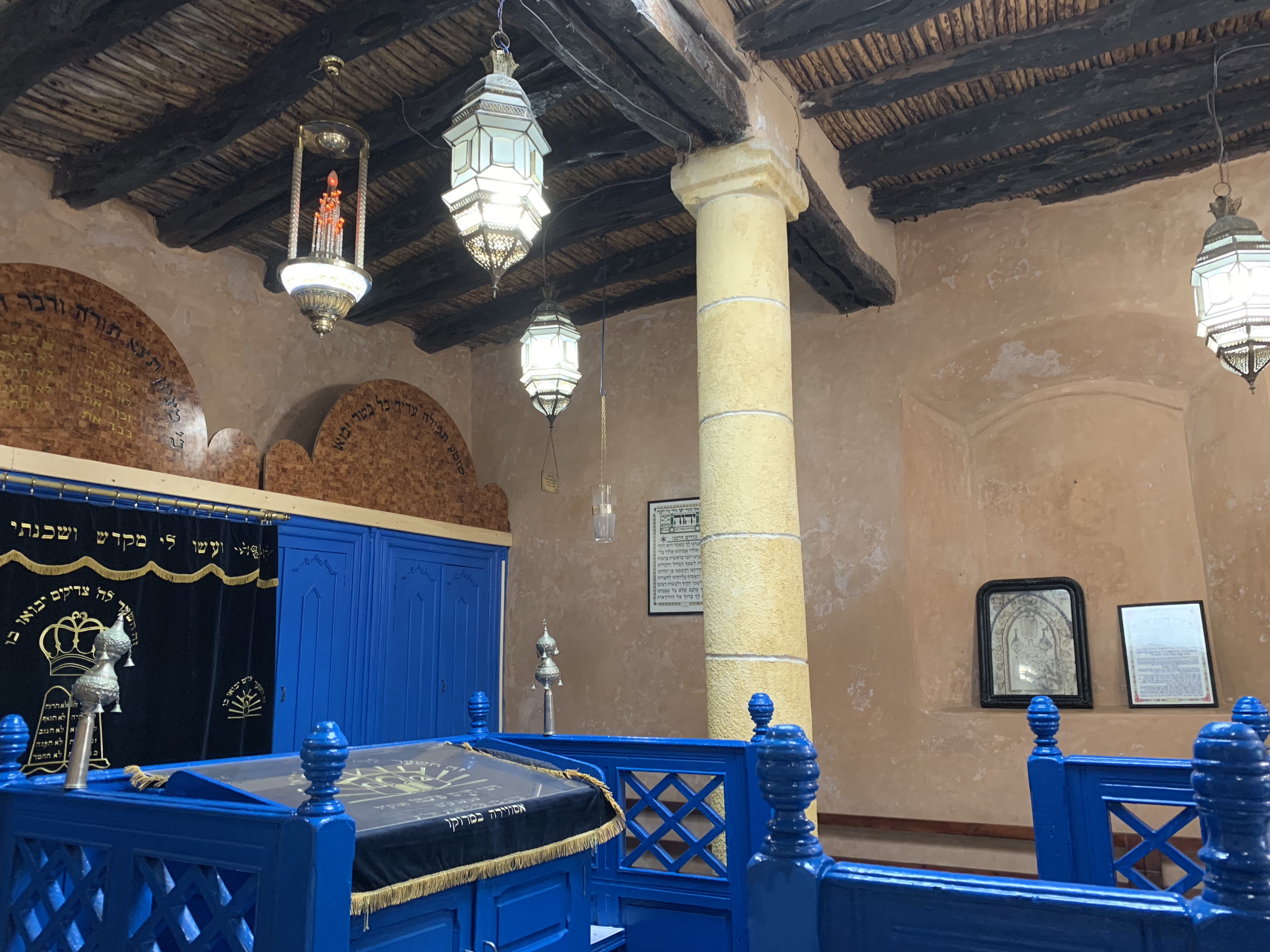 The synagogue used by visiting families, the men’s section 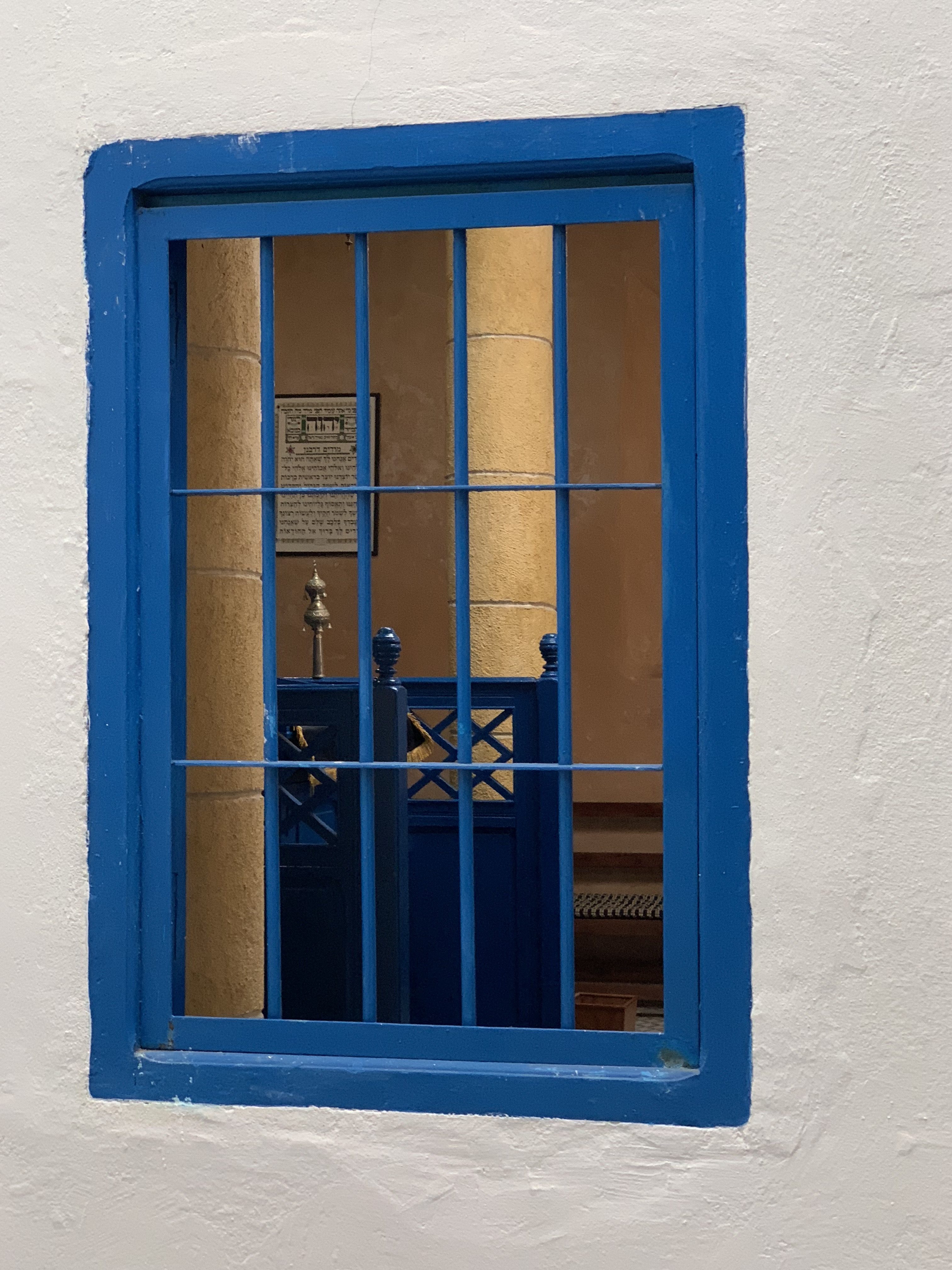 This is what the women are able to see in the same synagogue, a bit of the rabbi at the bima, and they can listen through the thick wall.

Some of us had lunch at a vegetarian restaurant in a small square.  And we all had a spectacular final group dinner together at a fine restaurant, La clé de voûte, where the owner supervises each patron’s meal to make sure it is satisfactory. 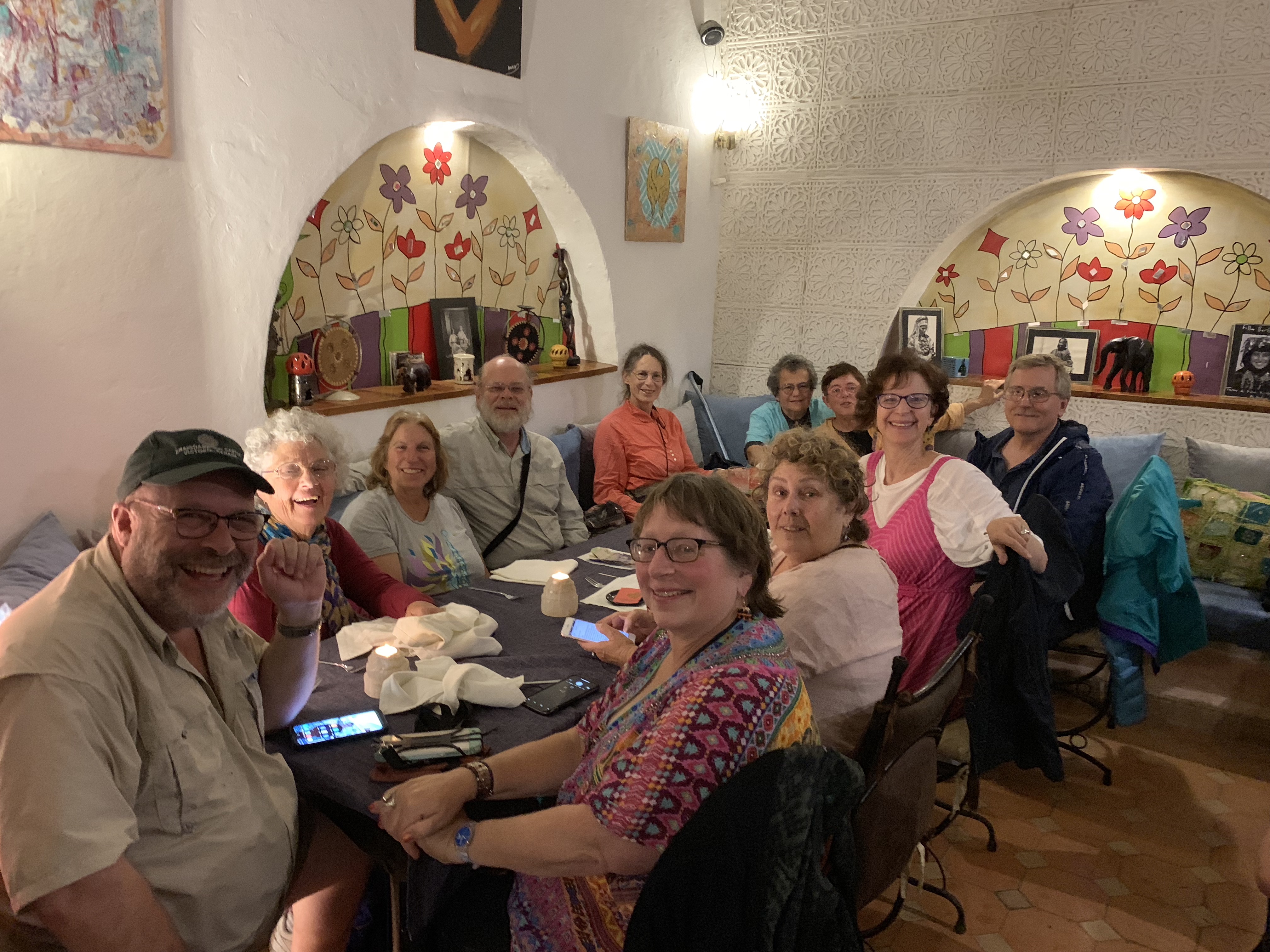 At our final group meal in Essaouria

I think Essaouria was the perfect place to conclude our group travels — 12 very compatible people, enjoying each others company and learning from each other as we explored this diverse and interesting country.

And so I say goodbye to Morocco, a country which accepted diversity of religions at a time when monocultures were the preferred norm; which fared better under colonial French rule than others less agreeable to change; and which is attempting to bring education and more global awareness to its traditional populace. 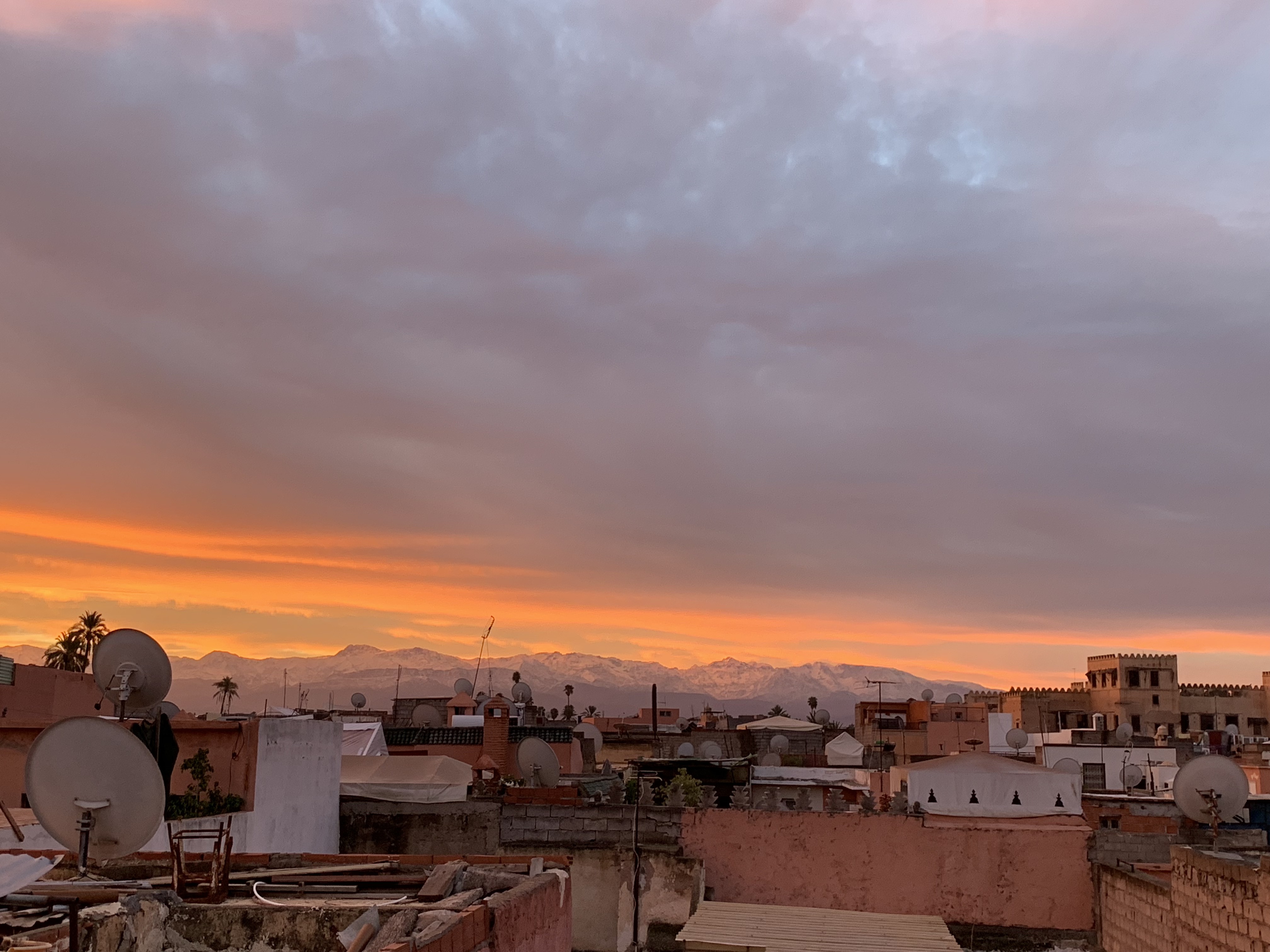 Sunset over the roofs of Marrakech